Believe it or not Gigabyte lists 18 models of motherboard that are built around the Intel P45 chipset. Add the G45, P43, G43 and X48 chipsets into the equation and the total number of current Core 2 models rises to 29 which is confusing to say the least, so it’s worth taking a moment to see exactly where the GA-EP45-DS3P fits into Gigabyte’s product range.

Every P45 model has a model code that starts GA-EP45 so it’s the suffix that we’re interested in, which in this case is DS3P. 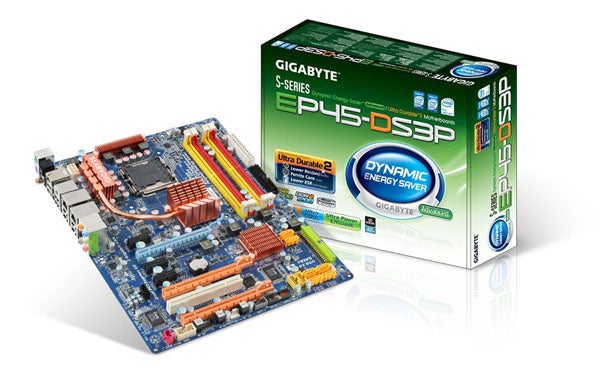 We recently reviewed the incredibly expensive GA-EP45-Extreme which sits at the top of the tree and close to that we have the bizarre DQ6 which has quad Gigabit LAN. Next we have the DS5 model which includes a secondary RAID controller to supply a total of ten SATA ports and then we come to the DS4 models which ”only” have the six SATA ports that are native to the ICH10R Southbridge.

These mid-range and premium models share a number of common features but the most visually striking is the extensive Silent-Pipe cooling system. This uses heatpipes to link passive coolers on the power regulation hardware, Northbridge and Southbridge.

At the bottom of the P45 range we have a selection of DS3 models which are very similar to the DS4 except that the passive cooling system is rudimentary. This means that the GA-EP45-DS3P comes in close to the bottom of Gigabyte’s P45 range but there’s no such thing as a cheap P45 motherboard so the price only sneaks under £100 by a tiny margin.

Run your eye down the list of features and you’ll find it looks surprisingly healthy for a budget model, including full support for Intel Core 2 processors with the fastest DDR2 memory that money can buy. In addition you can run a pair of ATi graphics cards in CrossFire X and the list of ports and connectors on the IO panel is as comprehensive as you might hope to see. 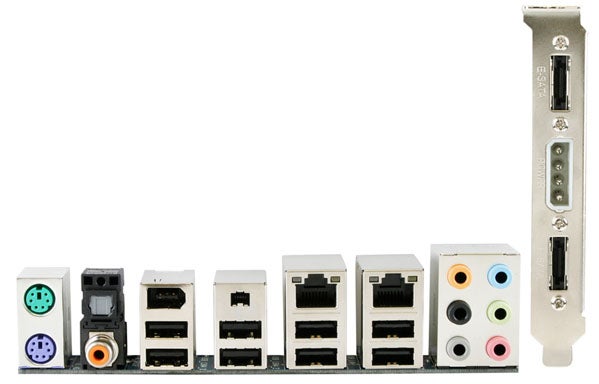 Gigabyte still supplies two PS/2 ports, which seems a touch cautious as PS/2 mice went by the wayside some time back and we’ve seen plenty of motherboards with a single PS/2 port that supports both mouse and keyboard just in case. At least those are the only legacy ports on the panel. There are optical and coaxial S/PDIF connectors for the ALC889A audio hardware as well as six audio mini jacks, no less than eight USB 2.0 ports, a six-pin Firewire port, a mini four-pin Firewire port and dual Gigabit LAN. If that’s not enough there are headers for four more USB ports and a third Firewire port.

This is an Ultra Durable 2 motherboard so the area around the CPU socket is typically neat and tidy and that won’t change with the transition to Ultra Durable 3 as the chokes, capacitors and MOSFETs look the same. The cooling system is slightly more extensive than we would expect for a DS3 model with a heatpipe linking the passive cooler on the power regulation hardware behind the IO panel and the cooler on the Northbridge. The tiny cooler on the hardware at the top of the board and the similarly small Southbridge cooler aren’t connected and have to rely on the airflow inside the case to keep them cool.

Take a close look at the GA-EP45-DS3P and it is clear that the hardware is identical to the GA-EP45-DS4, all barring the Silent-Pipe cooling system. The difference in price between the two models is £15 which isn’t a huge premium for a hefty chunk of ironmongery but our experiences suggest that P45 requires very little cooling so the EP45-DS3P does a fine job. This was the main reason that the EP45-Extreme sunk in our review as you are paying a great deal of money for a cooling system that is unnecessary.

The layout of the EP45-DS3P is generally good although the eight-pin power connector is a touch fiddly and the six SATA connectors stand vertically instead of being laid down, which could cause your SATA cables to get in the way of expansion cards. If you choose you can use the supplied bracket to convert two of the SATA ports into eSATA.

There are some neat features that distinguish the DS3P from other DS3 models in the shape of three illuminated micro buttons for Power, Clear CMOS and Reset across the foot of the board and an array of diagnostic LEDs. 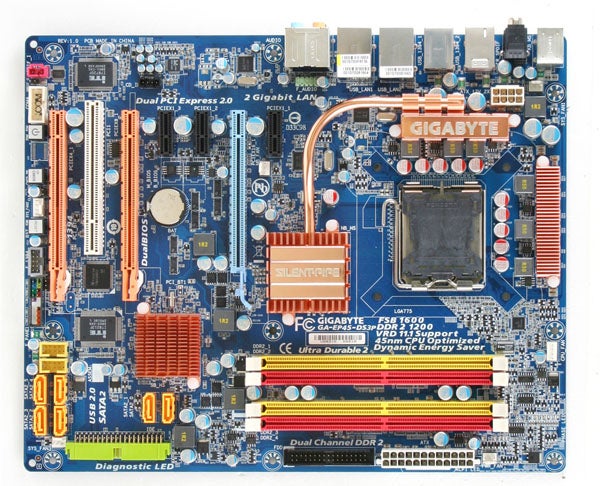 Testing the EP45-DS3P went very smoothly on standard settings with our Core 2 QX9650 CPU, 2GB of Kingston memory and MSI GeForce 8800 GT graphics card but it was a different story when we tried overclocking. We started with what looked like the easy approach as the Gigabyte BIOS includes a feature called CPU Intelligent Accelerator 2 or C.I.A.2 for short. It has five settings Cruise, Sports, Racing, Turbo and Full Thrust that load factory performance profiles but none of them would allow us to boot into Windows.

Raising the CPU clock multiplier from 9x333MHz to 10.5x333MHz looked promising until the system froze while running PCMark05. A modest speed increase to 10x333MHz worked reliably and then it occurred to us that this was exactly the same level of performance that we saw with the EP45-Extreme so we lowered the clock multiplier to 7.5x and raised the front side bus to 500MHz for a CPU speed of 3.75GHz and memory running at 1,000MHz. Attempts to raise the front side bus any further proved to be fruitless.

So what we have here is a fairly basic P45 motherboard that has identical performance to the most expensive model in Gigabyte?s Core 2 range. Although the EP45-DS3P may look a bit dull it takes the fight to the superb Asus P5Q Deluxe and wins by a narrow margin.

Its combination of decent features and overclocking capabilities combined with a fair price make the Gigabyte EP45-DS3P a convincing choice.