What is the George Foreman Kettle Charcoal BBQ?

Kettle BBQs, such as the George Foreman Kettle Charcoal BBQ, are great for smaller groups and easy to store. With this model, you get good looks, a lid for keeping the heat in and handy storage – all for a low price.

However, a fiddly lid and parts that get quite hot at times make this model slightly less flexible than some more expensive alternatives.

As with most models, some assembly is required. The neat instructions show you what to do, and you won’t need more than a screwdriver and adjustable spanner to put things together. It took me no more than 20 minutes to go from a flat-pack box to a completed BBQ.

The George Foreman Kettle Charcoal BBQ doesn’t use the thickest metal, but both the lid and base feel rugged enough, which is a step up from the cheapest kettle BBQs. It feels sturdy, too, sitting on four legs, with the back two legs on wheels for easy movement. But the plastic wheels are bog-standard models, which felt a little wobbly when screwed into place.

It’s useful having the wire shelf underneath, which you can use for storing charcoal or other items when the BBQ is not in use. 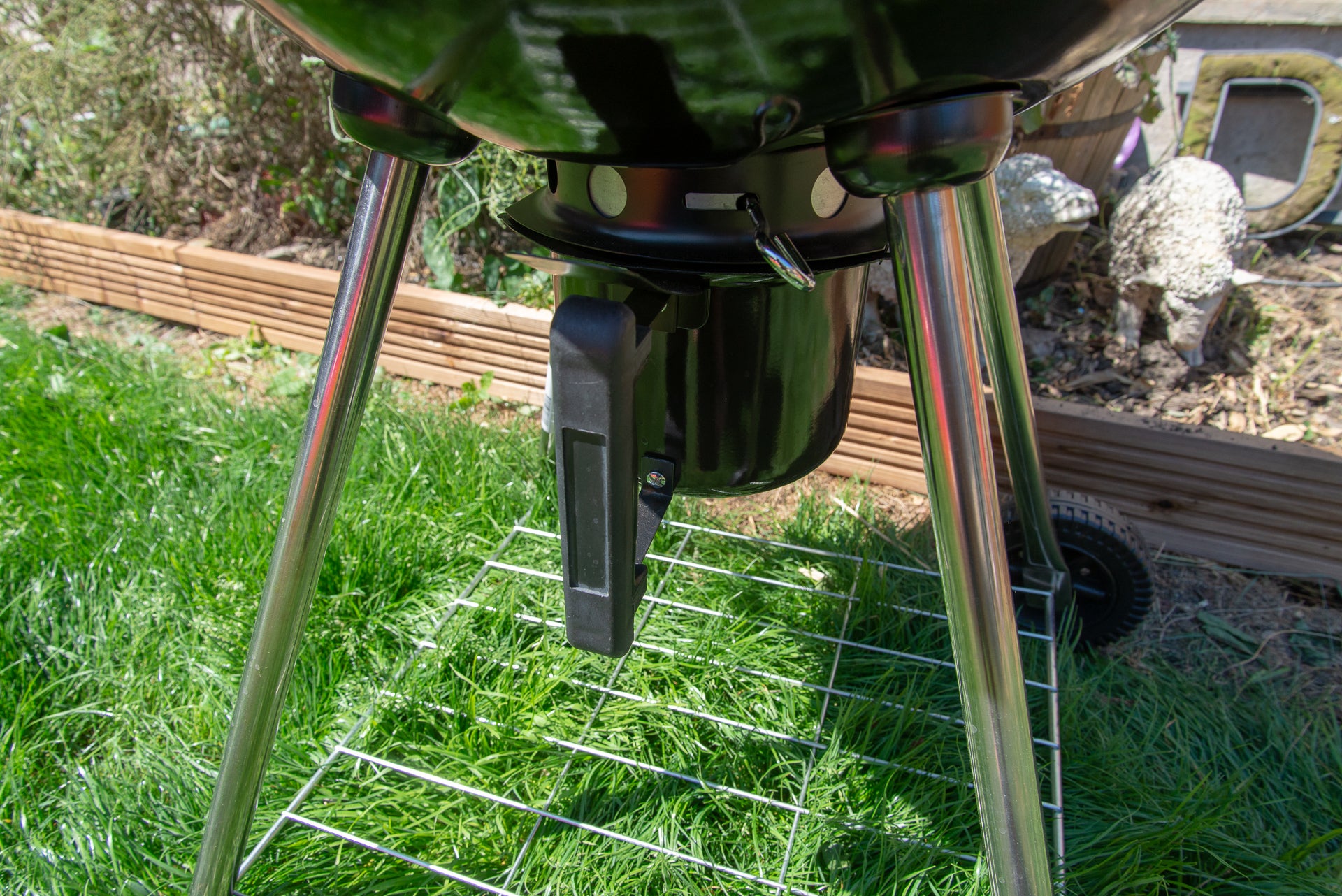 In the lid, there is a thermometer, which will give you an indication of the inside temperature. The BBQ is listed as being splash-proof, so you can cook in a bit of rain. But on my review model, water got straight into the thermometer after a very short rain shower, obscuring the view. 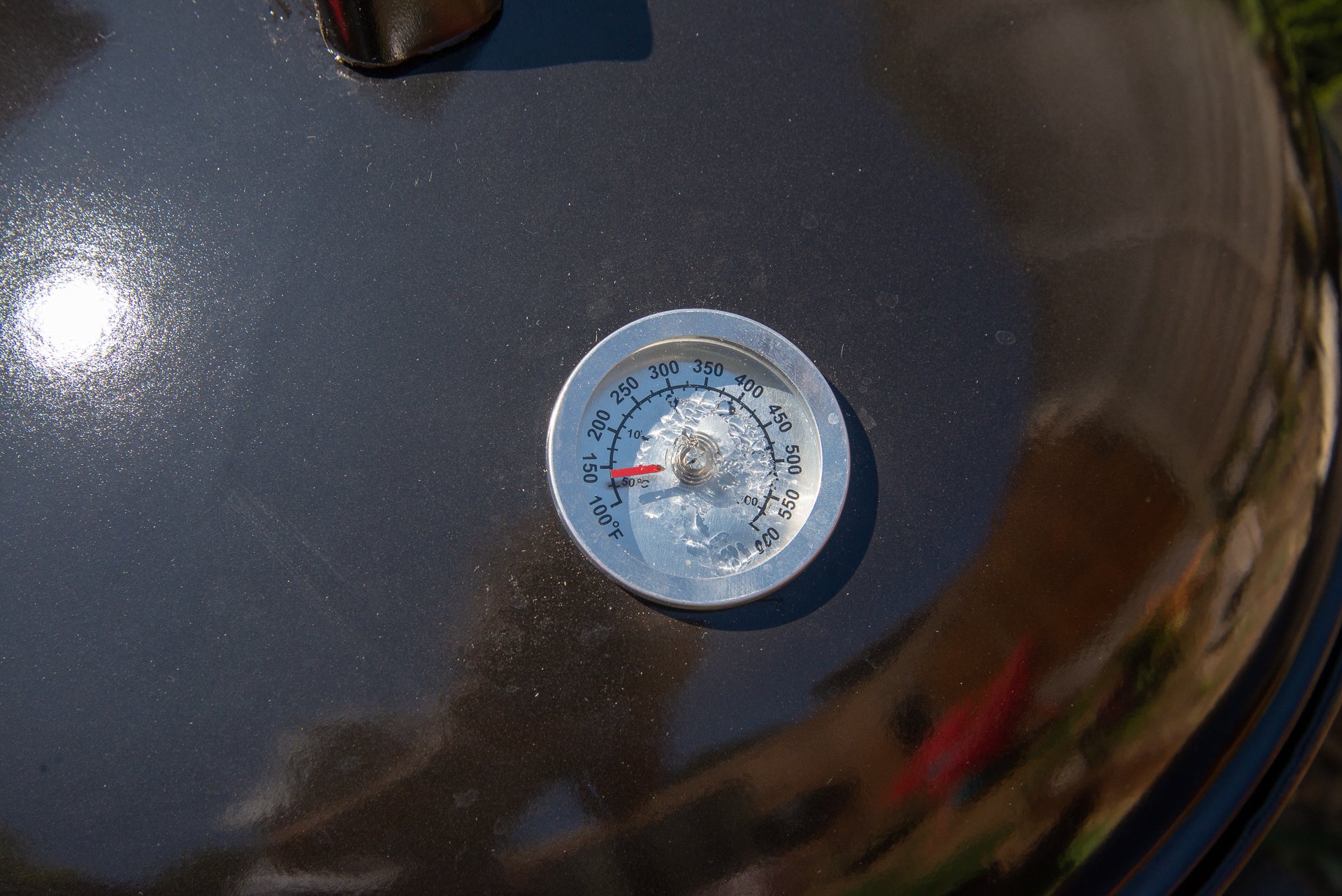 Once I started cooking, the water evaporated, but better sealing would have been useful. I recommend a BBQ cover or standing the George Foreman Kettle Charcoal BBQ in a shed when not in use.

At the bottom of the BBQ is an ash collector. From inside the kettle, there’s a filter plug, which stops bigger bits of charcoal dropping down when you’re lighting or cooking. Once the BBQ is cold, you can remove this and brush the remaining ash down and out, although the BBQ is small and light enough to be picked up and the ash tipped into a plastic bag. 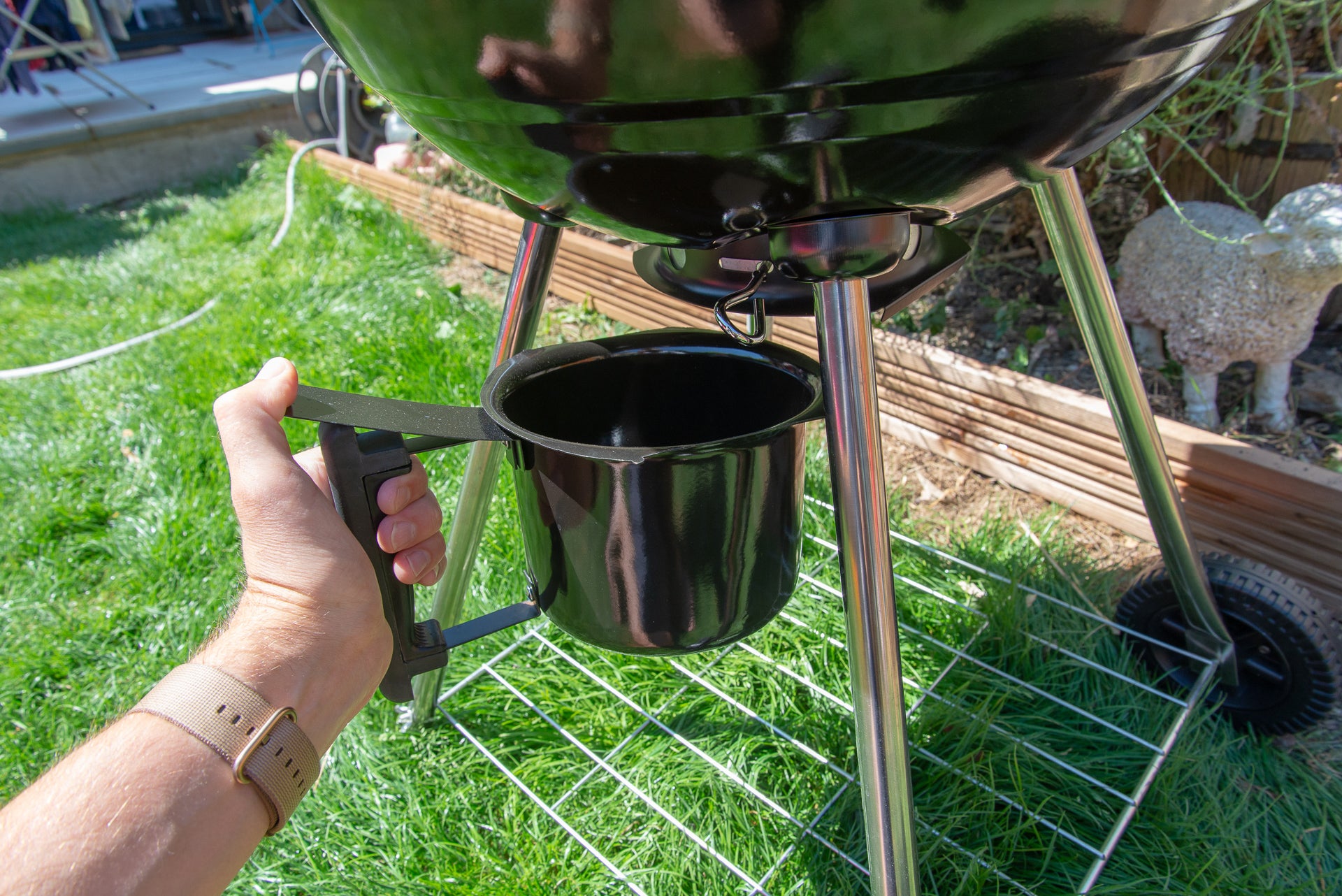 Charcoal sits on a metal grille at the bottom of the kettle. This helps with airflow around the coals, ensuring they burn evenly. Above the coals is the 45cm cooking grille, which you drop into place using the handles. Getting it lined up with the rim can be a little tricky, so place it carefully and wear oven gloves if you find that the coals are too hot.

George Foreman Kettle Charcoal BBQ – What’s it like to cook on?

The George Foreman Kettle Charcoal BBQ can take up to 1kg of charcoal safely. How much you use depends on how much food you need to cook and the eventual heat of the BBQ that you require.

You should also adjust fuel placement, depending on how you want to cook. Placing a circle around the inside is a good technique for indirect cooking, keeping the heat inside the BBQ. Adding coals into the centre makes more sense if you’re planning to cook with the lid off, using direct heat.

If you’re using direct heat, you need to get the balance right: you don’t want the BBQ to be too hot as there’s no way of changing the distance between the cooking grille and the coals.

Temperature can be further adjusted by opening or closing the air vent in the ash collector. When it’s open, the coals burn faster but hotter. This part of the BBQ becomes very hot, as you can see from the thermal images below, so always use oven gloves to adjust the heat. 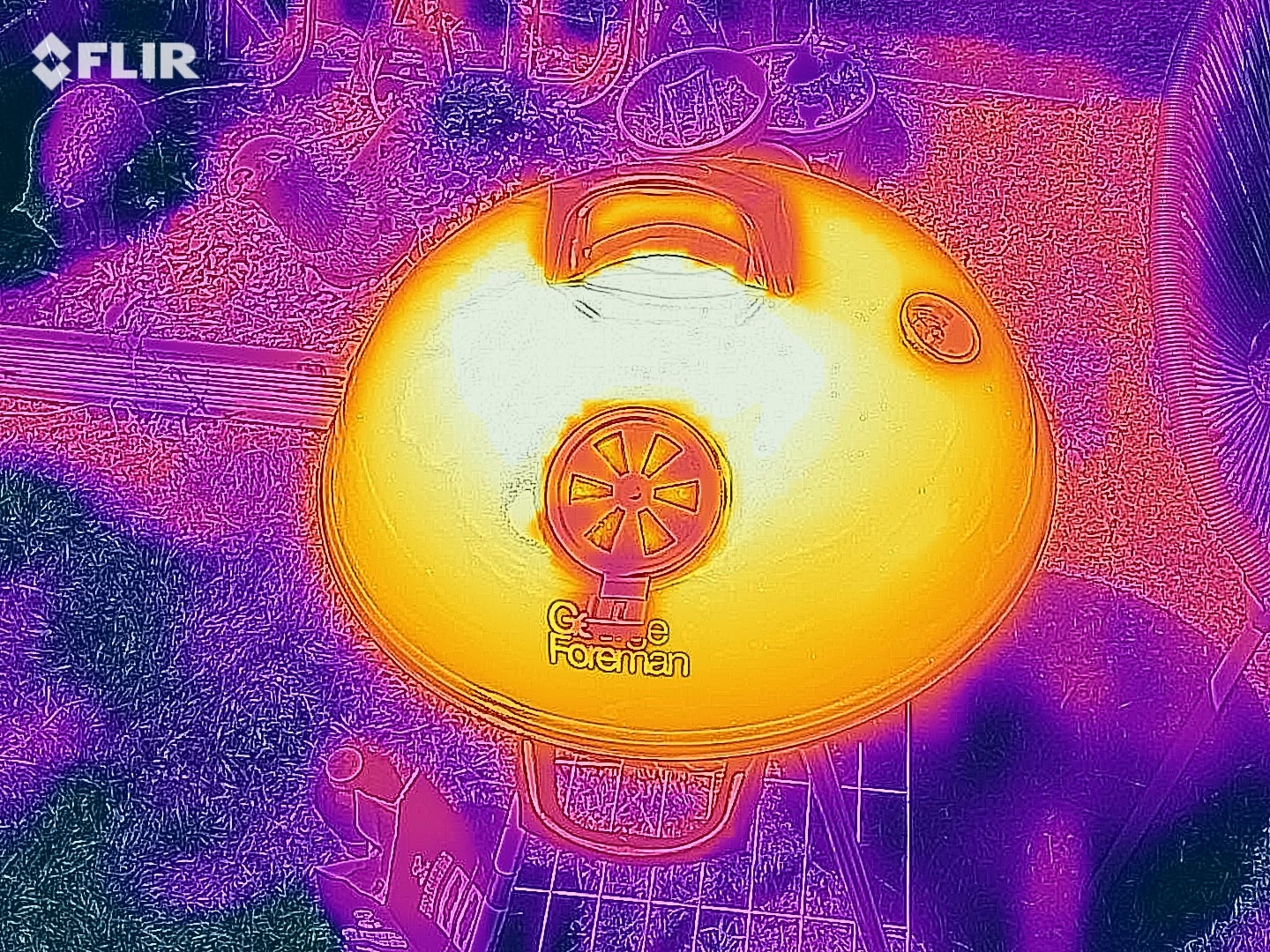 There’s also an air vent in the lid, held in place by a screw and a bolt. It became a little loose after use, so you may need to tighten it from time to time. That makes finer adjustment a little trickier.

Using the lid on the BBQ helps maintain temperature, helping food cook indirectly. Plus, a lid lets the smoke circulate around your food, giving it that true BBQ flavour.

For turning, or traditional grilling, you have to remove the lid. You can hang it off the rim of the kettle, using its attached hooks, but it’s a tricky job to get it balanced, particular as the handle gets very warm. 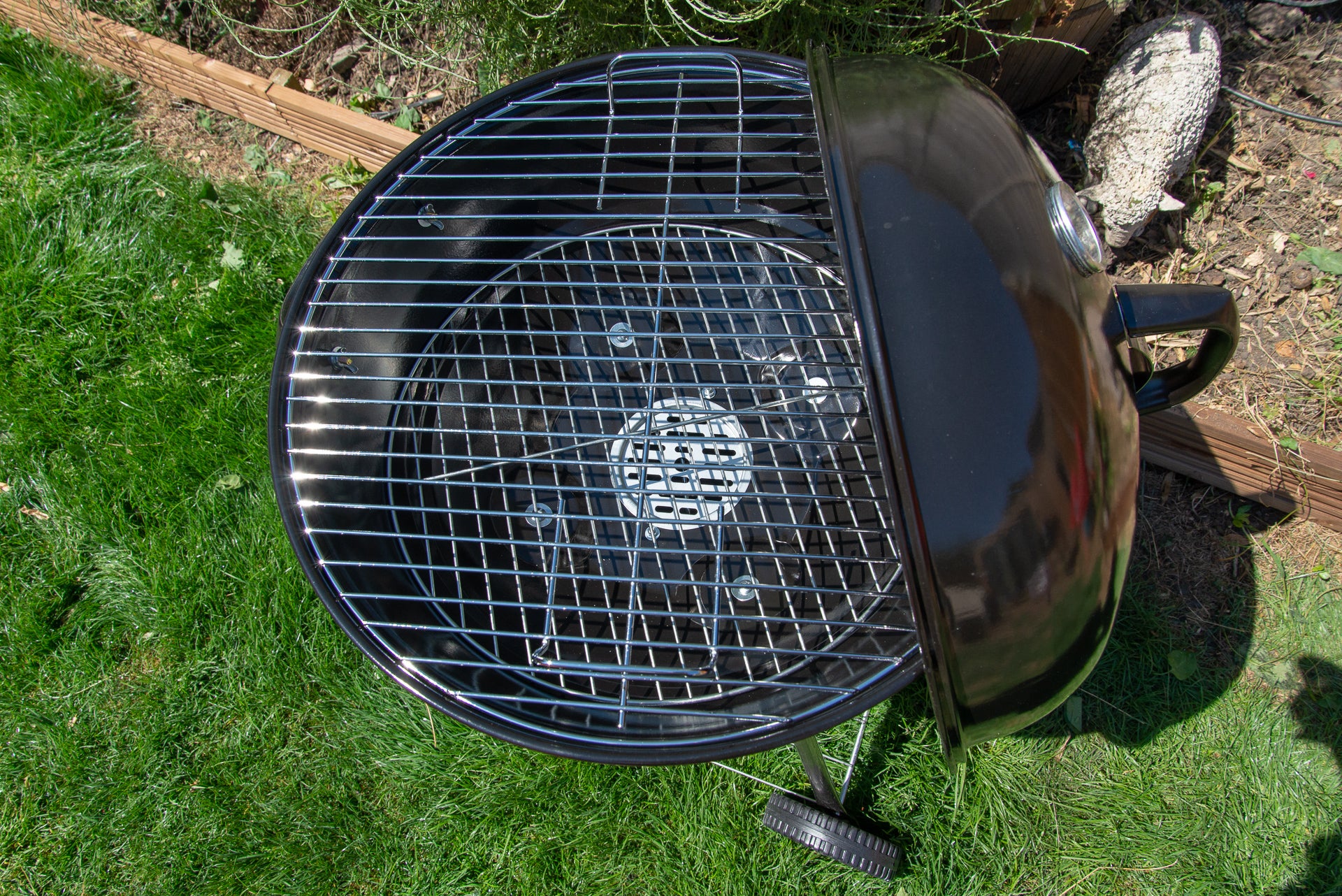 The front of the BBQ gets very hot, too. In fact, so hot that the tongs I had hanging from it became too hot to handle. Having somewhere to store BBQ tools would have been useful. 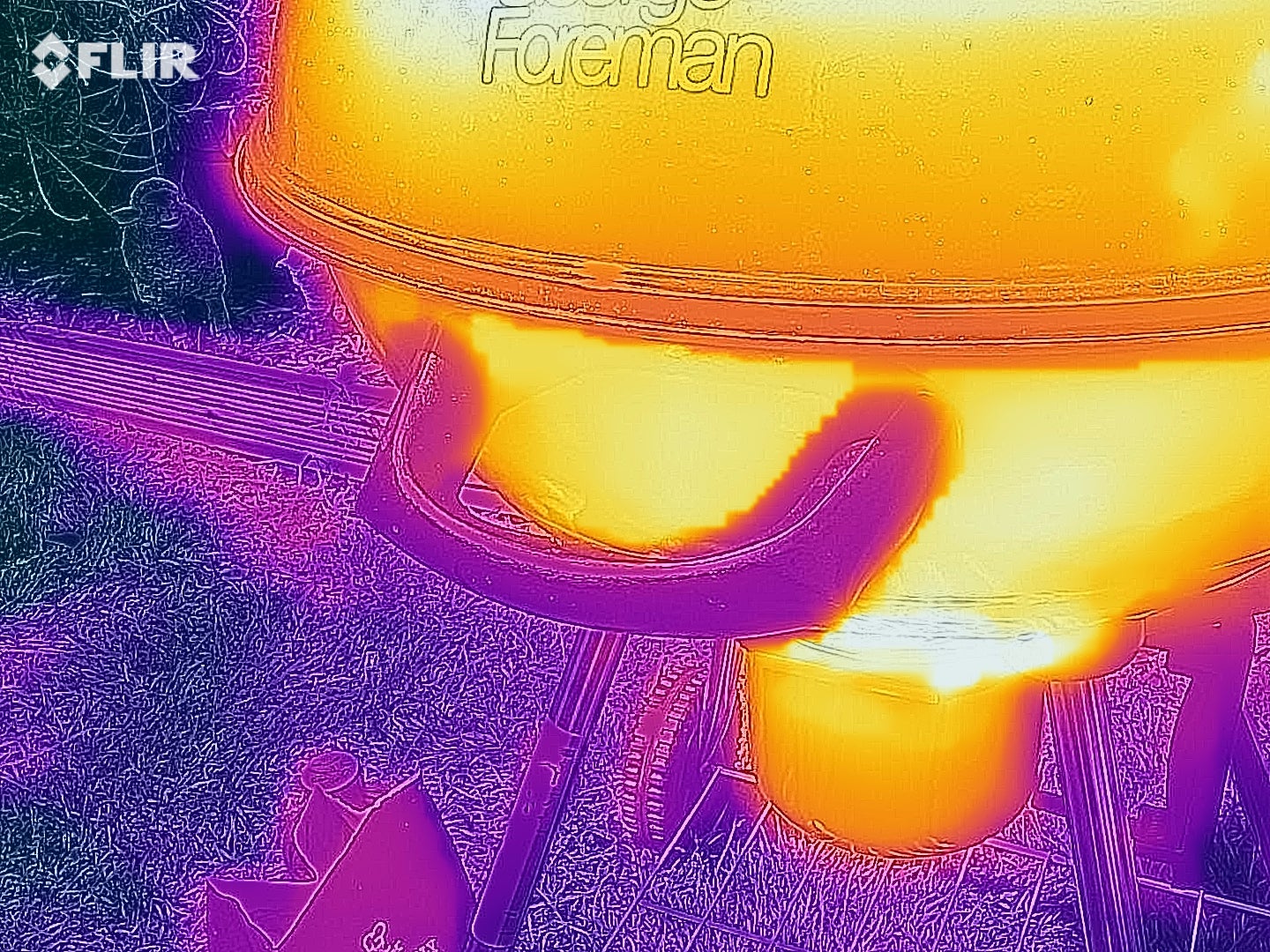 With the 45cm cooking area, there’s enough room to feed a family of four, or cook a larger item, such as a whole chicken. When food is cooked, you’ll need to remove it immediately, as there’s no warming area inside this BBQ.

The thermometer on the lid gives an indication of the inside temperature, but as usual, it is only a guide: the temperature of the coals and the position of the food all have a part to play. Regularly checking your food to prevent it from burning is essential.

From outside, the thermometer measured 155 degrees Celsius. Using an infrared thermometer, the outside of the BBQ was 202 degrees C, while inside the lid the temperature was 220 degrees C. That shows the importance of adjusting the BBQ and not over-relying on the thermometer. It also demonstrates that the BBQ isn’t as well insulated as some more expensive alternatives.

I cooked two marinated chicken kebabs, using direct heat for one and indirect heat for the other. With direct heat, it’s important to regularly turn your food. The proximity of the grill to the coals makes it relatively easy to burn food – as you can see by the slightly charred chicken on the top skewer on the image below. 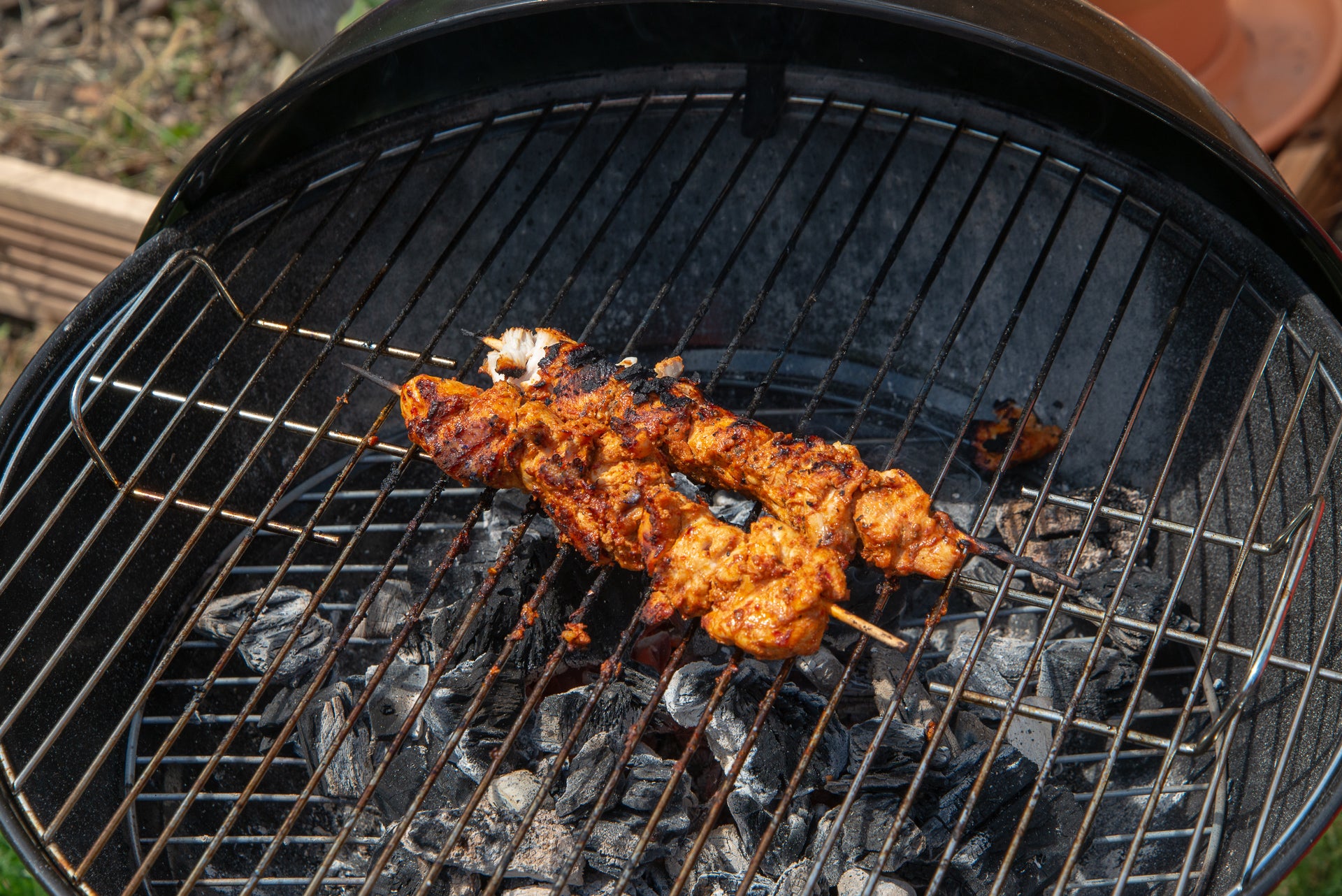 The gap in the grilles is just about right: large enough to let heat and smoke through, small enough to prevent food from falling through. I did find the BBQ a little low and had to bend over to use it comfortably. With 1kg of fuel, I managed a single cooking session of around an hour, after which more fuel was needed.

At the current price, the George Foreman Kettle Charcoal BBQ is good value for what you get. For occasional use and for smaller gatherings, it’s a convenient size, balancing the amount you can cook with easy storage.

But the fiddly lid can make it a little cumbersome to cook on, while the front handle gets so hot that you can’t hang anything on it while cooking. For budget cookers, it’s decent enough, but the similarly priced Dancook 7100 has adjustable shelves and is a better direct cooker.

A neat and well-priced BBQ, but it can be fiddly to use and some parts get very hot.