What is the George Foreman Evolve?

It’s been more than two decades since the Lean Mean Fat-Reducing Grilling Machine made its way into our kitchens, and the Evolve is just one of its most recent versions.

With a large enough grill capacity to cater for family meals, and removable, dishwasher-safe plates, the Evolve also has a unique Sear function that gives a boost of 260C heat for 90 seconds, ideal for sealing meat and fish to lock in the flavour. An adjustable foot enables it to switch from a tilted fat-reducing angle to a flat position, so that, in conjunction with the deep pan accessory, it can be used to bake pizza or make omelettes, stews, pancakes and more.

It’ll still cook a host of favourite foods, too, such as a whole fry-up, steaks, chicken, paninis, grilled fruit and burgers, removing up to 42% of fat. Waffle plates, which are available to purchase separately, can also be attached. 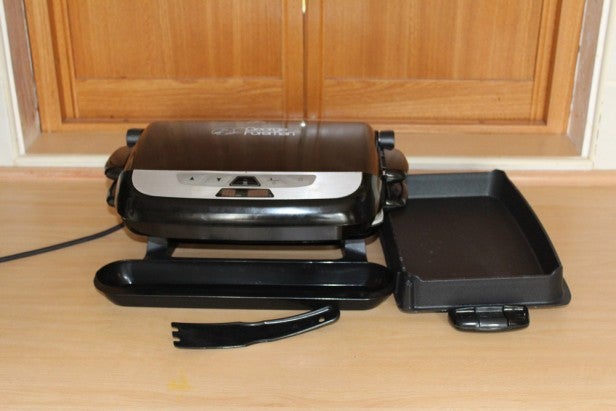 The Evolve’s basic shape resembles most of the other George Foreman grills, except when it comes to controls. Unlike its siblings, it has a sleek panel of buttons with an LED display that sits front and centre. Not only does this control its temperature and is home to the high-heat Sear button, but it includes a timer that goes up to 20 minutes before beeping when it’s expired – although this doesn’t switch off the grill.

The timer or temperature can be toggled while in use, if the food appears to be cooking faster or slower than expected, but as the temperature is stepped in 15C intervals (ranging from 145C to 220C), it’s not degree-precise. 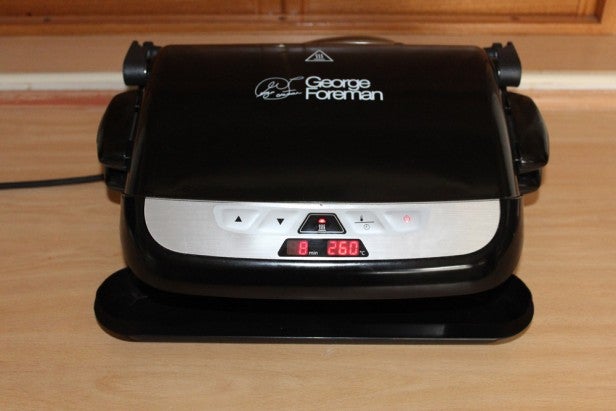 Inside, the grill plates are ceramic-coated to prevent food sticking and for easier cleaning. Both the top and bottom plates are removed by unclipping the handles on either side and fit back in again just as simply. Helpfully, the design of each is different, with a curved profile on the base plate and a ridge on the upper plate, so there’s no chance of mixing them up. The deep pan fits in place of the bottom plate when baking and it too has a practical design, with high sides to prevent liquids escaping and a non-stick finish.

A control to alter the angle of the grill is sited at the rear of the machine and only requires a pull-and-twist action to adjust. 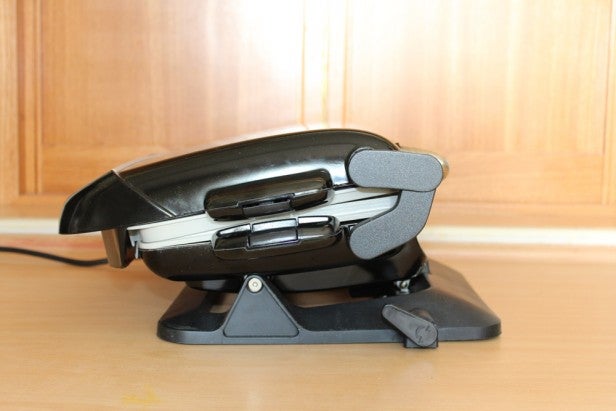 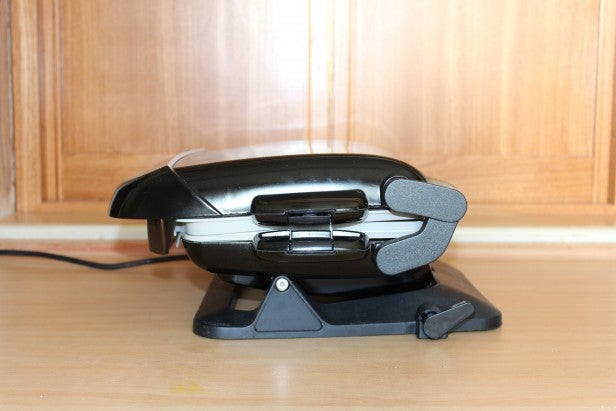 One of the most appealing things about the Evolve is that you can be cooking in minutes from plugging it in, so it’s ideal for quick meals. Fitting the plates and selecting a position takes seconds and it heats up fast. Once it’s reached the chosen temperature, it beeps to let you know it’s ready. One minor quibble is that the timer needs to be set from when you add food, as it counts down from the moment it’s switched on, even when pre-heating. 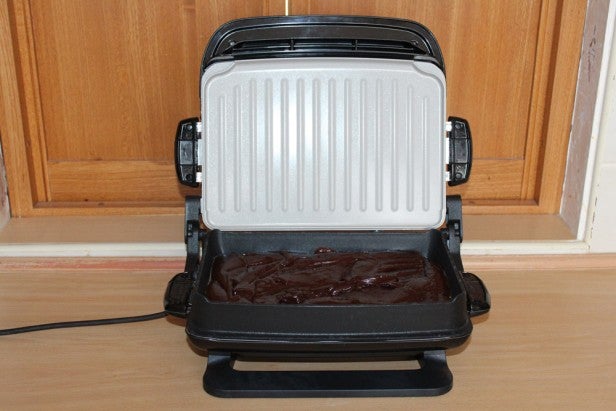 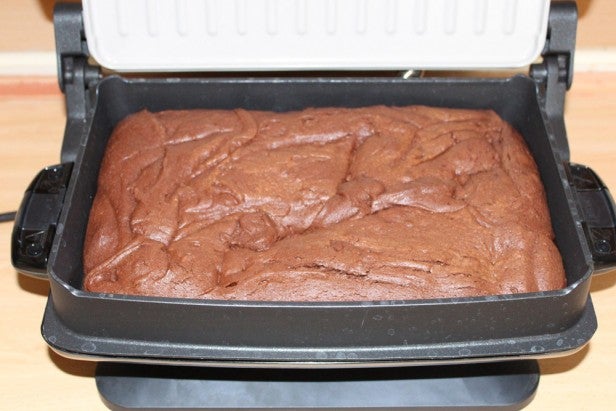 We started by using the deep pan to bake brownies on 175C. Halving the usual oven cooking time to 15 minutes, we left the mixture to bake, checking halfway through on progress, when the mixture was still wet. Once elapsed, we unclipped the deep pan to remove the brownies. They came out easily in one mass, baked but not burned, and while they were a little brittle when cooled, a reduced cooking time or temperature could resolve this.

Next, we tried steak, moving the Evolve into its tilted position with the bottom grill plate in place. The floating hinge came in handy, as the steak was thinly cut, so both plates still met snugly when closed.

We started by using the Sear function to seal the meat. This automatically reverted to 220C after 90 seconds and a satisfying amount of fat ran off the base plate into the drip tray below. The top of the Evolve grows hot when it’s cooking, but especially so while using the Sear function. The lip at the front of the machine is cool enough to touch but it’s best to wear oven gloves. 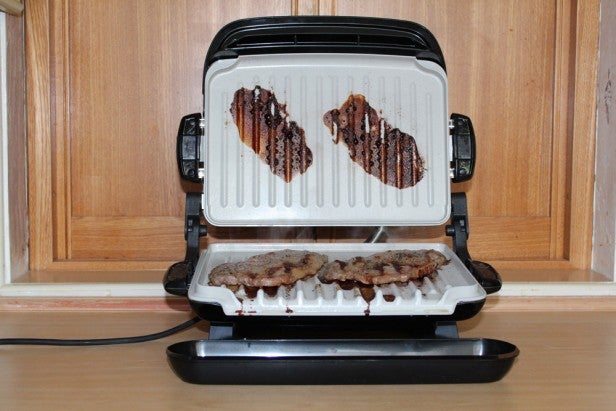 Finally, we made pizza using the deep pan. Stretching the dough into hot pan and topping with tomato paste, cheese, meat and olives, we left it cook for 12 minutes on the 220C setting. The finished pizza was removed from the pan without any trouble and had a golden, crisp base, light, fluffy texture and a moist, well-cooked topping. Once cooled, the plates and drip tray could then be cleaned in the dishwasher. 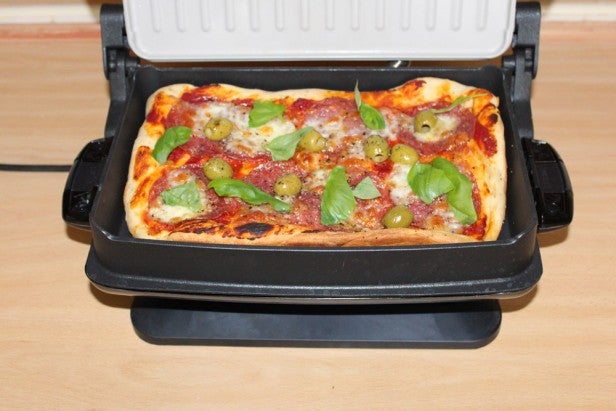 Should I buy the George Foreman Evolve?

As health grills go, the Evolve has bags of versatility beyond a meat-focused model. While it’s not especially compact to store, nor especially affordable, its capacity, adjustable foot and interchangeable plates mean it can cook a whole meal without any need for you to touch a hob or oven. It works well as an extra when entertaining or as a sole cooking appliance for small households, but we’d like the exterior to stay a little cooler.

Speedy meals, convenient clean-up and a high heat boost when you need it mean the Evolve is a grill that’s hard to beat.