To be honest, I don’t feel good about recommending this. If you already play Geometry Wars then you’ve probably already got this sequel, in which case it’s already too late for you and your loved ones. If you haven’t and you buy it on my say so, then I’m a bit like the guy who buys a tea-total mate just one beer, then sees him on a park bench clutching a can of Special Brew six months later. If you don’t have Geometry Wars in your life, then you’re probably better off without it. I know – you think you can handle it. Well, trust me. You can’t. 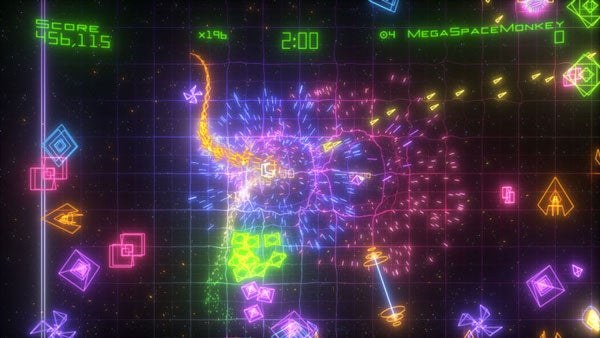 To my mind, Geometry Wars: Retro Evolved is probably the best and most addictive shoot-em-up of the last five years, if not the decade. Retro Evolved 2 is the better, more addictive version. Making it so can’t have been easy. Bizarre pretty much perfected the core gameplay and the aesthetic with the Xbox 360 debut, and Retro Evolved 2 hasn’t messed with it. You’re still a lone ship adrift on a grid, manoeuvring with the left analogue stick and blasting with the right analogue stick against a constant, implacable tide of hostile neon shapes. Dead shapes leave little multiplier tokens behind, and the more of these you collect, the more points you get for each shape killed.


As for the aesthetic, well Jeff Minter created this over-bright, neon-blurred polgyonal style of visual with Tempest 2000, but Bizarre has again taken it to a whole new level, creating an overwhelming flood of light and colour that – as the game heats up – challenges your eyes and brain to take it in. The mesh with the electronic soundtrack and the old-school arcade sound effects is seamless. For all its frantic intensity, there’s something beautiful and strangely balletic about Retro Evolved 2. Get in the zone, and you’re practically dancing through the kamikaze hordes, spraying bullets in graceful arcs as you twist and pirouette through the explosions. 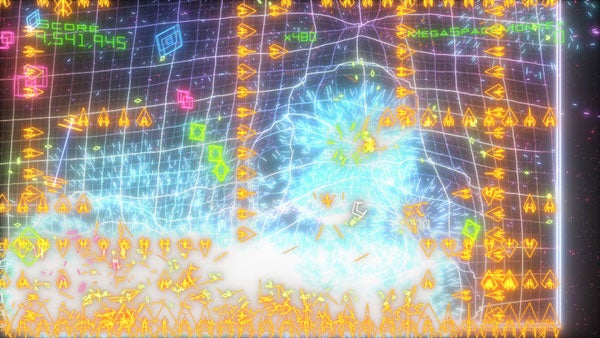 Few of GW’s imitators have managed to copy another of Bizarre’s achievements: to create abstract enemy characters that somehow have their own personality. I thought I hated the blue rhombus, clumps of which constantly work their way towards you, but that hate was nothing compared to the enmity with which I’ve come to regard the green gits who try to sneak up on you unless you can drive them away with your gunfire. And as for the blue and orange snakes. Grrr – they’re the polygonal spawn of Satan. Retro Evolved 2 adds a handful of newbies to the mix, and while most are a variation on existing themes, I’m sure that with time I’ll come to loathe them every bit as much.

So why, I’m sure you’re asking, should I buy basically a new spin of Retro Evolved. Well, Retro Evolved 2 still offers an enhanced version of your core Geometry Wars, but it has surrounded it with five other play modes that take the elements of Geometry Wars and tweak them in some interesting new directions. You begin with just one mode available – Deadline – and unlock the rest by playing and scoring high in each new mode as it appears. 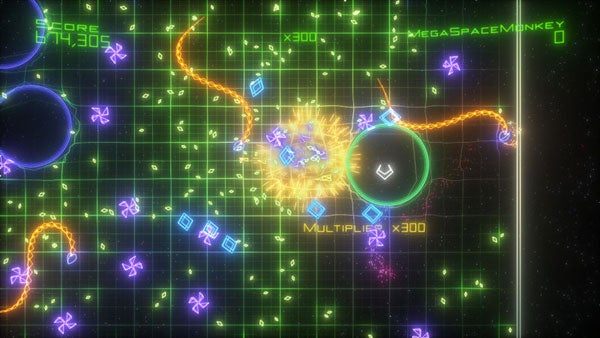 Let’s take them one by one. Deadline gives you three minutes to get a high score. You have infinite lives, but only a set number of bombs, and each time you die all the enemies disappear, so while dying won’t end your game prematurely, it will put a damper on your final tally. Next is King. Circular safe zones appear on the playfield. While in the zone you’re protected from enemy attacks and you can fire. Outside the zone you’re impotent and defenceless. The bad news? Each zone expires after a set period, meaning you’re constantly racing from zone to zone while picking up score multipliers as you go. To ratchet up the tension even more, you only have one life to play with. 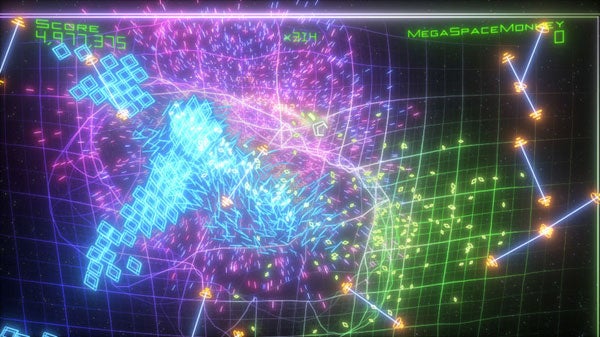 Then comes Evolved. As it’s the enhanced version of the Geometry Wars you already know and love, I don’t really need to explore this further. Next up? Pacifism. One life, no bullets, no bombs – just an ever increasing number of enemies on your tail, and some gates which, should you pass through them, blast any shapes in the vicinity into so many particles. That just leaves two modes to go. Waves (which may be familiar to fans of PGR4) is another one-life mode, and your job is to blast safe passage through successive horizontal and vertical lines of orange darts. Finally, Sequence is a series of 20 challenge levels, each consisting of one or more waves of different enemies. All you need to do is survive them, but with only three lives and a pretty steep difficulty curve, that’s an awful lot harder than it sounds.

The additional modes could have been a disaster or merely an irrelevance, but the more you play the more you realise that each brings out a new dimension or aspect to the gameplay. King, for instance, is a test of your grasp of movement and strategy. Merely racing from safe zone to safe zone won’t get you a high score; you need to pick up as many multiplier tokens as possible while you’re in the dangerous space in-between. Waves, meanwhile, requires feats of comprehension and concentration. If you can’t track the enemy waves and constantly keep on top of the speeding lines, you won’t last long enough to make a million. Sequence is probably the ultimate GW trial. If your skills are weak or your reactions less than awesome, you don’t stand a chance of making it through all twenty levels in one piece. 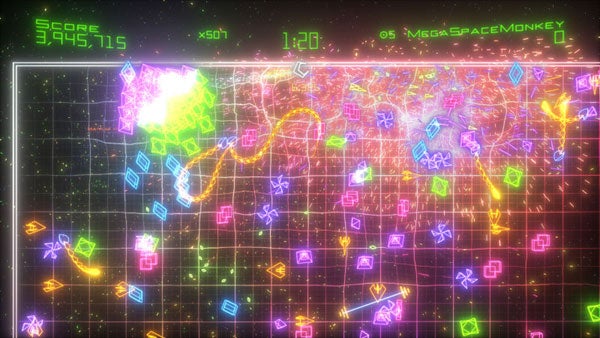 And even if you don’t like one or two modes, you’re guaranteed to find the rest fiendishly addictive. Before writing this review I had a quick session in each mode to remind me what was going on, and rapidly found myself lost in an obsessive thirty-minute quest for a new high score in King. I pulled myself away and did exactly the same thing minutes later in Waves. If you asked me two days ago I would have called these my least favourite game modes of the six, so don’t even ask how much time I’ve sunk on Pacifism or Retro Evolved. Somehow, the fact that some of the modes can theoretically be played in bite-sized chunks only makes matters worse. For a game that only lasts three minutes, it’s frightening how easy it is to waste ten times that in Deadline without thinking.


The other reason to get Retro Evolved 2 is the new multiplayer option, with each game mode playable by up to four players on a single console, either working in teams or with every man for himself. The lack of online play is still a little upsetting, but gather some mates around your house and there’s still plenty of potential for evenings to be lost, with or without the involvement of beer and pizza. 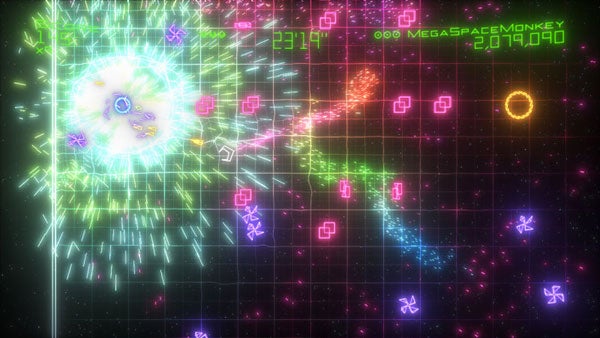 Given all this and the low, low price, Retro Evolved 2 is unmissable. In fact, the only reason I’d urge you to miss it is that it’s summer, and there might be some sunshine out there and with it the chance to do something more worthwhile with your time than blasting small and annoying geometric shapes into glowing particles. If you do buy Retro Evolved 2 your chances of enjoying such things could well be cut down to zero. This would be a shame. So buy Retro Evolved 2 by all means – it really is great – but make sure you have a friend, family member or partner who can drag you away from the screen every once in a while. There’s more to life than a high score table after all.


Now, if you’ll excuse me, I’ve got places to go and people to see. But first, I’m just going to give that blinking Sequence mode just one more go….


Gorgeous, perfectly balanced and ludicrously addictive, Retro Evolved 2 is the new high water mark for old-school arcade shooters. Buy it, but don’t you say I didn’t warn you…