A couple of years ago, the idea of a high definition camcorder for around £100 would have provoked not just scepticism, but probably incredulity. Now, however, there are umpteen models to choose from between £100 and £200, not least the bevy of pocket Internet-oriented models that have sprung up recently. Despite undercutting even these budget camcorders in price, the Genius G-Shot HD550T still offers a keen set of features, potentially making it a more flexible video shooting tool.


Video is stored in H.264-encoded QuickTime MOV format, at a data rate of 5.2Mbits/sec when shooting 720p. Twin SD Card slots are integrated, each offering support for SDHC media up to 32GB in capacity. So, with both slots fully stocked, over 28 hours of video could be captured. Even a 4GB card would give you 3.5 hours, rather questioning the need for two memory card slots.


Another surprising addition at this price is the touchscreen LCD. It’s not the most responsive in its class, and it’s hard to see in bright sunlight, but works okay if presses are very deliberate. The manual controls are somewhat strange, however. It’s now almost universal when holding a camcorder HandyCam style that you use your thumb to toggle record. But Genius has placed this button on the top of the unit, forcing you to use your index finger instead. 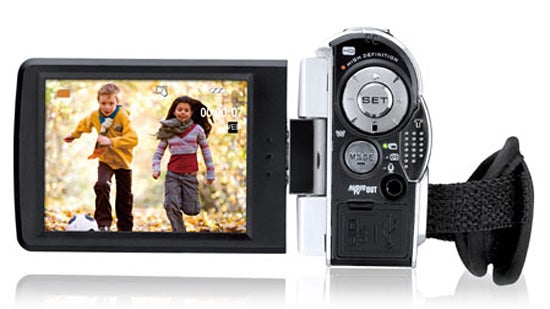 Bizarrely, the HD550T does have a lens ring of sorts. However, this merely toggles between regular and macro modes, with the latter enabling shooting as close as 20cm. Other than this, the lens is fixed focus, with a minimum focal distance of 120cm. There’s bad news when it comes to the zoom capabilities of the lens, too – and here the Genius really starts to show where money has been saved in its construction. There’s no optical zoom at all, just a 3x digital one. This is operated via the touchscreen or the jog dial on the rear.


The HD550T isn’t exactly packed with manual features, either, although it does exceed pocket Internet camcorders quite considerably in this respect. The menu can be operated via the touchscreen or jog dial. There are four white balance presets alongside the fully automated mode, but no manual option. Monochrome and sepia special effects can be applied. You can select spot or centre metering, plus a touchscreen-operated mode where you press the point in the frame you wish to use as reference. This works fairly slowly and is no match for the systems now provided by the likes of Panasonic and Sony. There’s also no one-touch focus option, since the lens is fixed focus. Backlight compensation can be found buried in the menu and whilst it’s good to see this important option, we’d rather it had its own control button.

Something that does have its own button is the twin-LED video light. This is enabled by pushing the jog dial upwards, and it doubles as a flash when in camera mode. There’s also a separate button for changing recording mode between video, stills and audio only. But no other settings have discrete controls.


Via the menu, you can toggle night mode and the motion detection system, which records video when the camcorder picks up something happening within the frame. The final menu option is an EV exposure control with nine levels. In camera mode, there are additional options for a self-timer and continuous shooting. However, there’s no direct manual control over shutter, iris or video gain, and no scene modes available either. 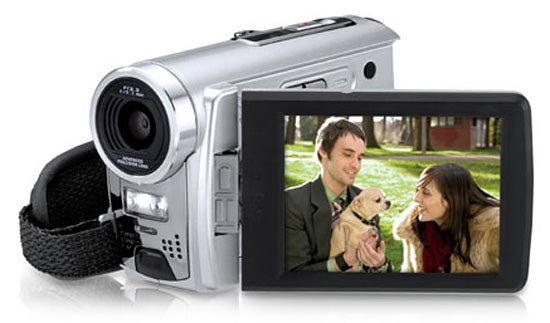 The HD550T comes with a 1,200mAh lithium-ion rechargeable battery pack, but it can also run on four AAA alkaline batteries if required, which could be useful if you run out of power when out and about. Strangely, whilst the USB 2.0 and mini-HDMI ports are covered by a rubber flap, the minijack, which drives composite analogue video and RCA audio output, is open to the air. But at least Genius supplies cables for HDMI as well as analogue video, so you should be able to view your content no matter what kind of TV you have.


Although it has a relatively large CMOS sensor, the Genius doesn’t shower itself in praise where video quality is concerned. In good lighting, colours are adequately faithful, but there’s already a noticeable amount of noise. This becomes very evident as illumination drops, and colours quickly fade to grey. The HD550T’s low light performance is better than any other Genius camcorder we’ve tested, but still far from stellar, even at this price. 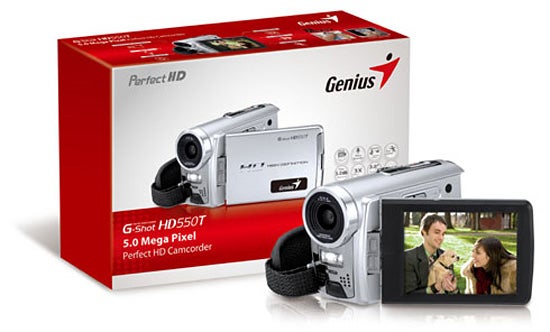 The majority of pocket Internet camcorders, all of which sport smaller sensors, outperform the Genius in poor illumination, making them a much better choice for indoor family gatherings. The complete lack of any image stabilisation is also very evident when shooting handheld. The G-Shot picks up the smallest of movements. This is particularly surprising considering the similarly priced Genius G-Shot HD520 does at least offer electronic image stabilisation, although not the superior optical system.


Overall, the G-shot HD550T shoots better video than other Genius camcorders we’ve tested, but that’s not saying much. Its poor image quality and limited features aren’t particularly mitigated by its low price. Although slightly more expensive, Internet-oriented models such as the Flip Video Mino HD 2nd Generation shoot more dependable footage in a wider variety of conditions, and they’re more pocket-friendly too. Unfortunately, the Genius wins plaudits neither as a cheap pocket point-and-shoot, nor as a more feature-laden alternative to the Flip. We’d recommend the Mino HD for the former, or stretching your budget to the Samsung HMX-R10 instead, if you want a low-priced but feature-packed HD camcorder.