If you’re a keen digital photographer, you’ll probably spend a lot of time working with graphics editing programs, adjusting, editing and correcting your photos. By now you’ll also probably have realised that a traditional computer mouse is not an ideal tool for this sort of work. Even a good quality mouse simple isn’t accurate enough for pixel editing, and using one for a long period of time can leave you with an aching wrist, and can cause long-term health problems such as carpal tunnel syndrome and repetitive strain injuries. 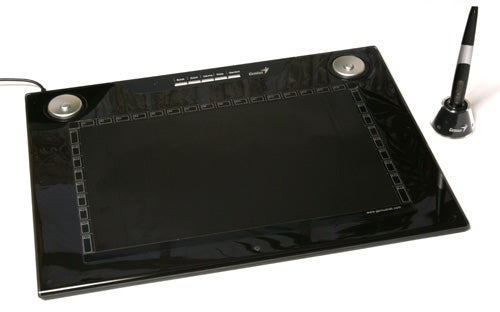 The best solution to both of these problems is to use a pen tablet. They usually have several times the movement resolution of even a high-quality mouse, and making small precise movements with a pen places far less strain on your hand than the same action using a mouse. It’s a lot easier to make precise movements with fingertip pen control than it is when moving your whole hand.


The big name in pen tablets is Wacom, best known for its excellent Intuos3 series, but professional-standard Wacom tablets are very expensive, especially for the larger sizes. An A4-sized Intuos3 costs nearly £400, and even smaller A5 models cost over £130. The cheaper consumer-oriented Wacom Bamboo series of A6-sized tablets are around £30-£40, but are really too small and lack the resolution and precision for serious photo editing. 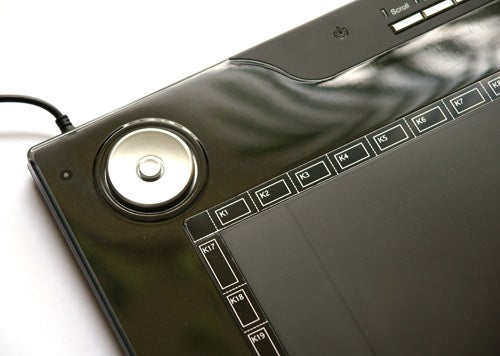 Fortunately there is now a viable alternative in the slim and stylish shape of this Genius G-Pen M712 tablet. It offers a big 12-inch by 7.25-inch (30.5 x 18.4cm) widescreen drawing area, a two-button pen, dual scroll wheels and 34 user-programmable buttons, all for the bargain price of under £90. It’s even compatible with both Windows and Macintosh computers. So what’s the catch?

There really isn’t any catch. Of course the technical specification isn’t quite up to the standard of a product that costs over four times as much, but it is surprisingly close. It has a drawing resolution of 4,000 lpi (lines per inch), compared to 5,080lpi for an A4 Intuos3. The pen offers 1,024 levels of pressure sensitivity, which matches the Wacom pen, and the active drawing area is only a couple of centimetres smaller. The Intuos3 tablets only have 10 programmable hotkeys, and don’t have scroll wheels, but they do have pen angle sensitivity, something which the Genius tablet lacks. This is a feature that is really not that important for photo editing, although artists who like to paint and draw using a tablet may miss it. The drawing area can be switched at the touch of a button between 4:3 and 16:9 aspect ratios.

I’ve been using the M712 for about a week now, in place of my old A5 Wacom Graphire tablet, and I’m very impressed with it, although I have to say it didn’t start out that way. When I first installed the M712, I noticed that the pen response was very slow, and I also discovered a number of problems with other programs, which I quickly determined were caused by the device drivers supplied with the tablet. However when I uninstalled them, cleaned up my PC’s registry and then installed new updated drivers downloaded from Genius’s website all the problems disappeared, and the device has been working flawlessly ever since. I’d suggest that if you buy this tablet, ditch the supplied driver disk and download the updated drivers straight away. Hopefully the updated drivers will be included in subsequent releases, but for now it’s a case of better safe than sorry. I didn’t have the opportunity to test the Macintosh drivers, but I’d suggest the same precaution. 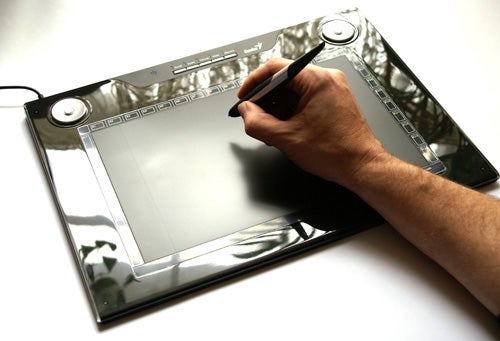 The other software supplied with the M712 is interesting. It comes with two complete photo editing programs; Ulead/Corel PhotoImpact 12SE and Adobe Photoshop Elements 5.0, both of which are full OEM versions. Personally I prefer Elements, but PhotoImpact is also a very capable editing program. As well as these there are two rather nifty utilities that are installed along with the tablet drivers. One is the macro key manager used to program the hot key shortcuts on the tablet, and the other is Office Ink, a strange little program that lets you hand-write notes directly onto your desktop background, or to write and sketch in MS Office documents and emails, and then embed the graphics as GIF images into the documents, which can be used for adding your signature to product loan forms, if you happen to review gadgets for a living.

I have very few criticisms of the G-Pen M712, and even those are more like minor nit-picks than serious problems. Compared to the slim and lightweight Wacom pen, the M712’s pen is a bit clunky. It contains a AAA-sized battery, and consequently it does feel a bit bulky, especially if you have small hands. Also the pen has no eraser on the back end, and the buttons do feel a bit cheap, but it does come with a couple of spare nibs and a tool for changing them, which is a nice touch. 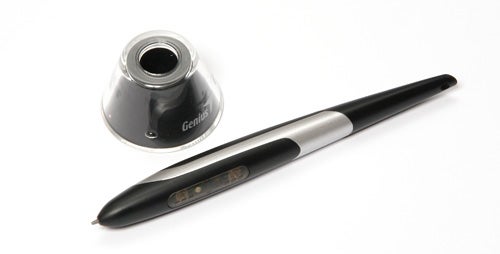 My other nit-pick is the light that indicates that the device is powered up. It is bright blue (of course; isn’t everything?) and flashes on and off in a very distracting manner. It’s also completely unnecessary, since the buttons also have indicator lights that come on when the device is operating.I suppose I could just put a bit of black tape over it… 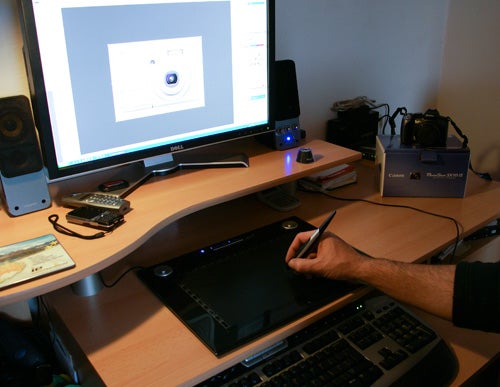 For a remarkably low price the Genius G-Pen M712 offers attractive and efficient design, good build quality, decent performance and a useful range of features. For about 25 percent of the price of a Wacom Intuos3 it offers about 90 percent of the features, and even adds a few unique features of its own, which is pretty spectacular value in my book.