Back in January I reviewed the Genius G-Pen M712 pen tablet, a useful low cost peripheral for graphic artists and digital photographers. Today I’m taking a look at another Genius pen tablet, the G-Pen M609X, a medium-sized 9.5-inch model. The pen tablet market is virtually a monopoly, almost completely dominated by Wacom with its Bamboo, Intuos and Cintiq products. There’s no question that Wacom’s tablets are exceptionally good, but they are also very expensive, with prices for the new Intuos 4 range starting at £200, and one about the same size as the M609X costing around £400. For those of us on tighter budgets the Genius range provides a viable alternative at a fraction of the price. 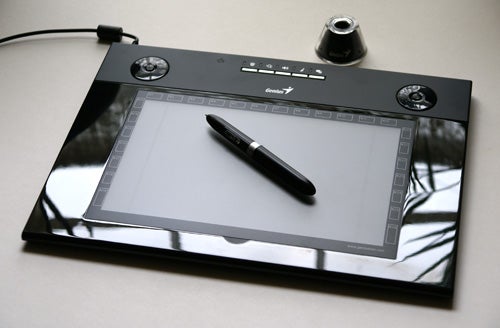 The M609X is part of a new range of Genius tablets that have seen a number of improvements over the previous models such as the M712. The overall appearance is much the same, with a glossy black surround, two large rotary zoom/scroll controls at the top with a row of buttons in between, and 26 pen-activated hotkeys around the drawing area. The M609X is a smaller model than the M712, with a widescreen-format drawing area measuring 13.6 x 22.8cm, slightly wider but not as deep as the A5 paper size, although it can switch between 16:9 and 4:3 aspect ratio at the press of a button. It’s a nice looking gadget, and the build quality and finish is much better than the budget price would suggest. 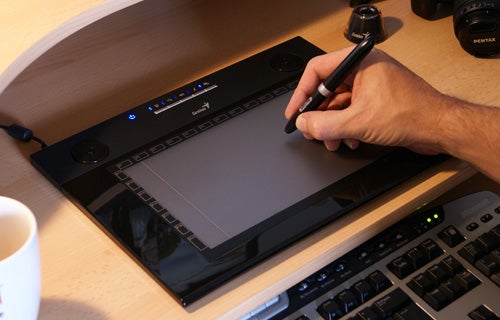 Like the M712 the drawing surface has a paper-like matt texture, and is very pleasant to draw on with the hard-tipped pen. One of the changes for the new model is that the surface of the drawing area is actually a flexible plastic sheet which lifts up at the front. It is semi-transparent, so drawings or photos can be slipped underneath it for tracing.

The other obvious change is the pen supplied with the M609X. It is a different shape to the previous model, shorter and slimmer, similar in size and appearance to a fountain pen. It has two buttons which are positioned closer to the tip than on the previous model, and are consequently easier to operate. I can’t say for sure whether the new pen differs in operation, but it’s certainly more comfortable to use. 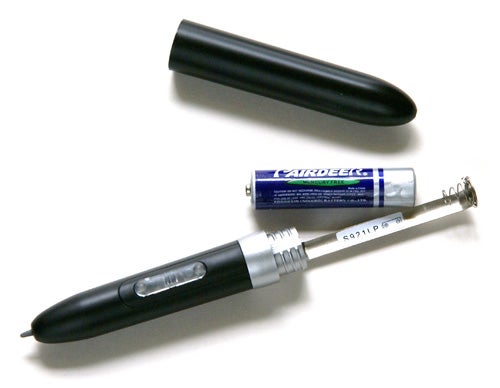 Unlike the pens used with Wacom tablets, the pens supplied with the Genius tablets are powered by a single AAA battery, which is included. Some readers of my previous review expressed concerns about this, citing it as another advantage of the Wacom system, but I still have the have the M712 and do occasionally use it, and the original battery supplied with that pen still appears to be fine seven months later, so battery life doesn’t appear to be a major issue. 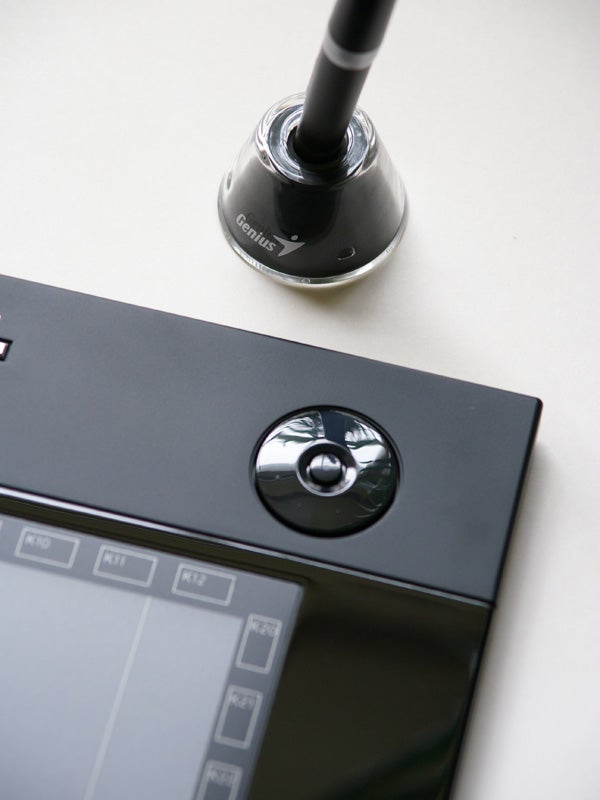 The driver software for the M609X includes a manager for the hotkeys around the edge of the drawing area. The top row are fixed presets and cannot be altered. They include some useful defaults such as New Document, Open, Save, Cut, Copy, Paste and Undo, but they also include shortcuts to open Microsoft Office applications, including Word, Outlook, Powerpoint, Excel and Internet Explorer. As I said, these presets cannot be altered, however there are a further 14 hotkeys that can be set as shortcuts to launch any other application.

Like the M712 the M609X has a resolution of 4000 lines per inch, compared with 5080 lines per inch for the latest Wacom Intuos 4. The pen has 1024 levels of pressure sensitivity, compared with 2048 for the Wacom, and it doesn’t have the Wacom pen’s angle sensitivity. Nonetheless the pen draws very smoothly, and the pressure sensitivity is good enough to produce realistic airbrush effects, or to mimic the action of a painting or calligraphy brush.

When I reviewed the M712, I noted that the driver supplied on the accompanying CD-ROM was very slow, and that downloading a new driver from the Genius website markedly improved the tablet’s performance. It seems that Genius has learned by its mistake, because the driver supplied with the M609X is much improved, and indeed is the same version (v3.42) as is available for download from the website. It’s still not quite as slick as the instant response you get with the £400 Wacom Intuos 4, and there is a small but noticeable lag when drawing or painting with fast long strokes, but in most situations, and especially in delicate photo editing, it’s barely noticeable, and the tablet performs smoothly and effectively. 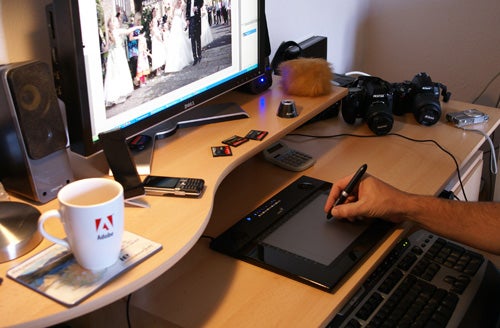 There’s no question that the Wacom Intuos 4 is a much better pen tablet than the Genius M609X, but then the M609X costs about one fifth of the price of the Wacom, and for the money it performs extremely well. For general photo editing and graphics work, as well as for any handwriting applications, it’s fun to use and an absolute bargain.

For just £80 the Genius G-Pen M609X pen tablet offers good build quality, stylish appearance, a useful range of features and surprisingly solid performance. It’s not as good as the expensive Wacom Intuous 4, but you’re not going to find anything to beat it for the price. It’s a real bargain and ideal for general graphics work.