Call it a next-gen ghetto blaster or a boom-box for the iPod generation, there’s no question that Gear4’s latest iPod speaker system looks like a revival of the sort of tape-based, mobile music system you would have found in teenage bedrooms throughout the 1980s – including mine! Of course, the glossy, piano-black finish is a little more classy than the old, dark-grey plastic favoured at the time, and the sweeping lines and graceful curves are a long way from the straight lines and peculiar ribbed areas adopted by the likes of Sony, Sanyo and (if you were really unlucky) Alba, but you can definitely see where the inspiration for the CDB-50 must have come from.


I sort of like the retro styling. My better half said it looked like a handbag, then asked if it came in a duck-egg blue, which (I’m guessing) means it might have some cross-gender appeal. Whatever you think, at least it’s not yet another indistinguishable iPod speaker dock. 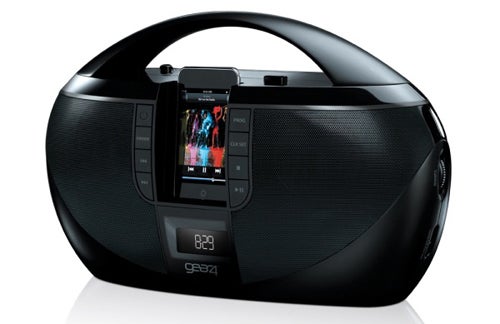 Nor are the CDB-50’s retro leanings confined to its design. Remember CDs? You know, the round shiny things you slot onto your PC so that you can listen to them in Windows Media Player/Winamp/iTunes/Songbird or transcode them across to your favourite MP3 player? Well, the CDB-50 can play them too. Still listen to honest-to-goodness analogue FM radio? The CDB-50 will play that too, and there are no fancy pants digital presets, just a good, old-fashioned tuning dial. You can even ditch the mains cable and power the CDB-50 from eight – yes eight! – of those whacking great C-size batteries. Frankly, Gear4’s latest seems to have one foot in the present, and one foot firmly in the past. For some of us, that’s no bad thing.


The unit is fairly compact, at around 40 cm wide, 22 cm tall and 11cm deep, but heavier than you might think at just under 2.2Kg without batteries installed. Build quality is actually pretty good considering the price, and while I don’t think the finish will last long in the wild without scratching, the CDB-50 isn’t the sort of thing you’d be terrified about taking into the garden or (heaven forbid) the local park.


In terms of controls, Gear4 has kept things reasonably simple. You’ll find a four-way input selector switch and a volume dial on the left side, the radio tuner and band selector on the right, and controls that double up for your iPod and the built-in CD player on the front, above a basic LCD status screen. On the top there’s just the CD eject button, a pull-up antenna and a bass boost control.

It seems to me that the CDB-50 has been designed not to frighten those who might have had a portable CD player in the past and are now moving on to the iPod equivalent. If you used one of those, you can certainly use one of these. A tiny remote control is also provided, which allows more control over iPod menu navigation than the very basic onboard controls. However, it also feels fairly cheap and rather nasty and might as well have “please lose behind the nearest sofa cushion” written on the back.


Your iPod sits in a cradle between the two sets of speakers at the front, and three adaptors are provided to give support for iPods ranging from the iPod classic and iPod video to the third and fourth gen nano and the first and second gen touch (the iPhone isn’t listed in the compatible devices). For those of you who aren’t members of the Apple faithful, an auxiliary 3.5mm jack is hidden behind a flap at the back though – to be perfectly honest – I doubt you’d buy the CDB-50 if you didn’t have an iPod to go in it.

Despite descriptions I’ve seen of the CD drive as slot-loading, your old discs clamp onto a more old-fashioned sprung spindle that hides beneath a locking flap on the back. As well as the basic transport controls (play, skip, etc) you can program tracks or select random play. Woohoo! “Is this really how we used to do things?” you might ask, but if you still actively listen to CDs you’ll find these things comforting, and the only mild disappointment is that the CD player will only play straight audio CDs, not any MP3 compilations you might have knocking around.


Whether you’re using your old CDs or your newer MP3s, there’s one other way in which the CDB-50 reminds me of my old eighties boombox; it doesn’t actually sound all that great. Don’t get me wrong – the sound is good enough for background listening at reasonable volumes, but if you want Hi-Fi sound from a compact box, the CDB-50 is no miracle worker.

At low volumes the sound is okay, but everything seems boxed in around the mid-range, with no sparkle at the top end, and very little in the way of bass. Here’s where that bass boost button actually comes in handy, pushing the bottom end up so that you can hear, say, the bassline in Rilo Kiley’s Under the Blacklight. All the same, it’s a dull, muddy kind of bass, and not the sort of thing that makes you want to play Massive Attack or DJ Shadow. Vocals and acoustic guitars seem to stand up better, as a blast of Don’t Let it Bring you Down from Neil Young’s Live at Massey Hall proved, but throw anything heavy, complex or dynamically rich at the CDB-50, and it really does struggle to cope.


At higher volumes things improve slightly, and you’re actually better off switching out the bass boost if you want a crisp sound. Tracks from Bat for Lashes’ Two Suns album begin to come alive, and slick, pop productions from Take That or Justin Timberlake develop a little punch. Nonetheless, there’s always that slightly plastic, boxed-in quality to the sound. The bass doesn’t really cut through. The treble never shimmers or reveals much detail. 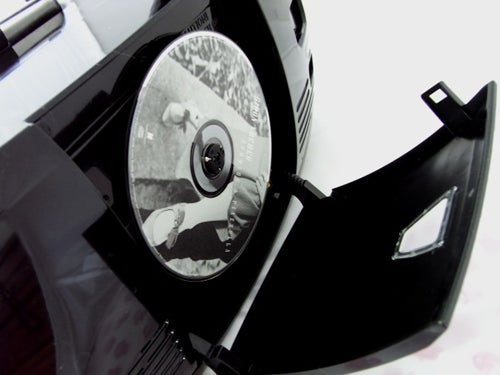 Listen to Aimee Mann’s You Do from the Magnolia soundtrack and the vocals come through rich and clear, but the details in Jon Brion’s idiosyncratic production are buried. Rockier tracks from Pearl Jam, Soundgarden and Mastodon are all mid-range mess with no dynamics, and you can forget about classical; the CDB-50 just doesn’t have the subtlety or definition to cope. In general, if something sounds good on the average car stereo, then it’s probably going to sound good on the Gear4 CDB-50. If it’s the sort of thing you’d rather listen to on headphones or on your stereo back home, then it will probably just about sound okay.


This isn’t a disaster, for the simple reason that at £70 I don’t actually expect an iPod Speaker dock to sound incredible, and just about okay might do for a spot of kitchen listening when I’m doing the washing up. All the same, were I spending my own money I’d stretch my budget a little further to something like the Klipsch iGroove SXT or Gear 4’s own BassStation. It might not have the portability or the cool retro styling, but give me sound over image any time.


While its blend of ancient and modern is appealing, there’s no escaping the fact that the CDB-50 is only an average performer. Nice looks, good value, mediocre sound.