What is the Gaggia Carezza Deluxe?

The Gaggia Carezza Deluxe is an espresso machine out to provide a barista-style coffee-making experience. That means you’ll need to get a little more hands-on than you would with a pod machine or a bean-to-cup one, but that’s all part of its charm.

With striking looks and quality coffee on offer, the Gaggia Carezza Deluxe makes a good addition to just about any kitchen. However, it’s a little temperamental and build could perhaps be slightly better given the £220 price, originally as high as £270. 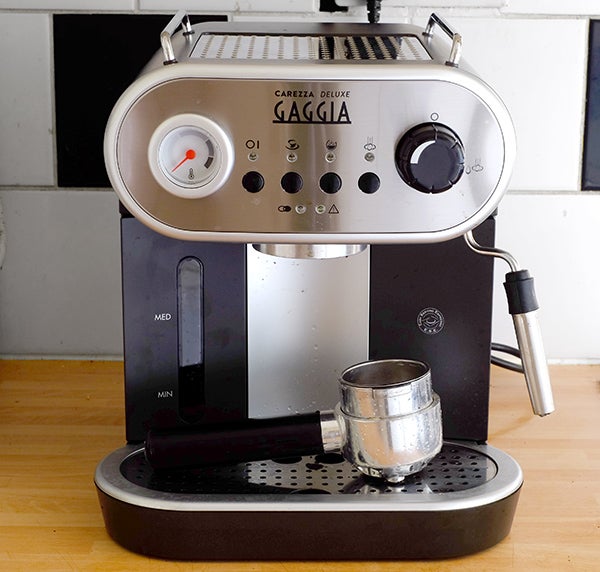 The Gaggia Carezza Deluxe has more style than most coffee machines. With a rounded front and a retro-looking analogue temperature dial, it has a lot more personality and Italian flavour than most.

Without wanting to accuse Gaggia of valuing style over substance, the look has been given plenty of attention here – and as an appliance that’s going to be a centre point of your kitchen, that’s no bad thing.

It’s mostly plastic, though, aside from the front control plate, the cup warmer and the coffee holder mechanism. Everything that’s prone to wear in the Gaggia Carezza Deluxe is made of strong enough stuff, but the largely plastic construction means it’s relatively light. 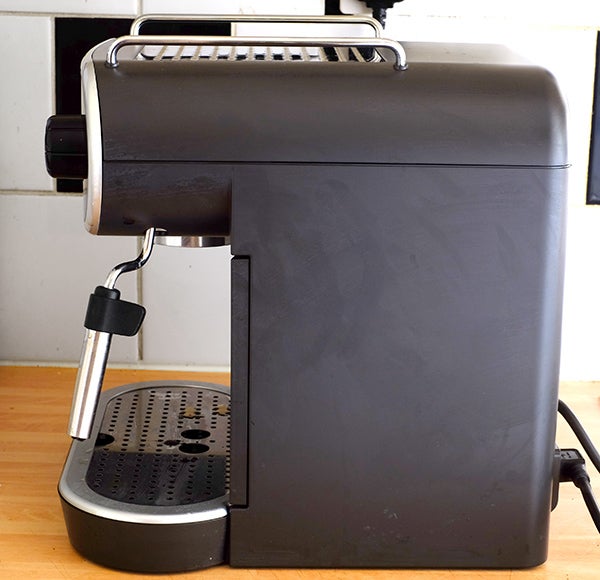 This is notable because of the machine’s manual style. You have to twist in the portafilter – the coffee holder with the long handle – and the force it requires means you may need to hold the machine in place with another hand to ensure it doesn’t move on the kitchen top, especially if the water reservoir’s running low. The coffee arm uses a spring-loaded mechanism, meaning it automatically centres itself, helping you to align your cups properly if you want to serve two coffees at once.

The water tank slots in behind the coffee holder, and holds a fairly generous 1.4 litres of liquid. 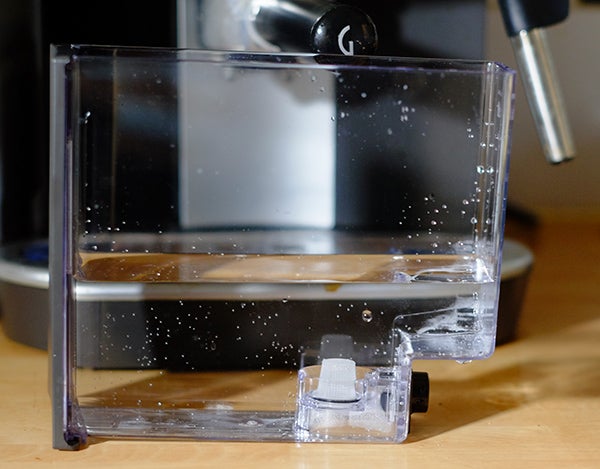 There’s no automatic preparation of milk in the Gaggia Carezza Deluxe, with a steam spout that can be set to emit either steam or hot water using the buttons on the front, then turning the dial to the right.

As with other manual espresso machines, there’s a degree of technique you need to ace to really master the art of making coffee, especially if you’re going to be drinking milky drinks such as lattes as well as plain black espressos.

A machine like the Gaggia Carezza Deluxe gives you a more direct sense of control than some, with less of a gulf between you and the process going on behind the scenes. However, the way it operates complicates this relationship a little.

The Gaggia Carezza Deluxe uses a pre-brewing and pre-heating process that can make it feel as though you’re at the whim of the thing’s temperamental nature a little. Odd little pauses following button commands and slightly unpredictable breaks in the delivery of hot water and steam make operation seem quirky and slightly inconsistent. 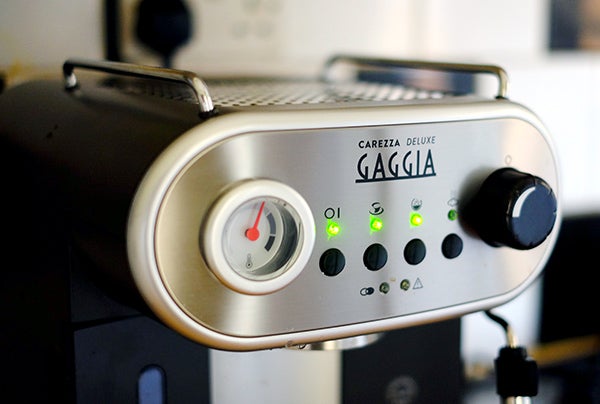 As standard, the Gaggia Carezza Deluxe performs a rinse cycle when turned on, too, which means you can’t simply jam in the portafilter first thing in the morning, but have to wait for it to do its thing first. The machine also occasionally seems to require a few presses of a button to actually respond: it’s a quirky little thing.

Until you get used to the way the machine works, the rhythm of its heating system, it can feel as though you’re not really in control. And that sense of control is one of the reasons to buy a manual espresso machine rather than one that boasts of its ability to make 78 different drinks at the press of a single button.

The Gaggia Carezza Deluxe is also a little on the noisy side. While any 15-bar pump is going to create a fair amount of noise, the noise seems to be exacerbated by the construction – you’re not just hearing the pump but the slight hum it causes in the machine itself. It’s not serious, but is perhaps a sign that the look is a little more impressive than the build. 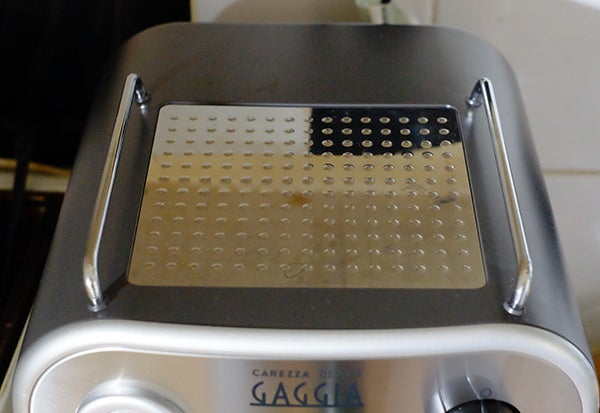 It’s not worth attributing too much value to the temperature gauge, either. The Gaggia Carezza Deluxe offers no control over water temperature, and there are no markings to tell you what level it’s actually at – aside from ‘pretty hot’.

What it effectively ends up doing is to act as a indication of how far it’s into its pre-heating ‘boot-up’ process that happens when the machine is turned on. It looks nice too, though, doesn’t it?

As a largely traditional espresso machine, the design caters primarily for smaller espresso cups, and the portafilter height is fixed, but there is enough room to fit a mug if you like your coffee Americano-style. 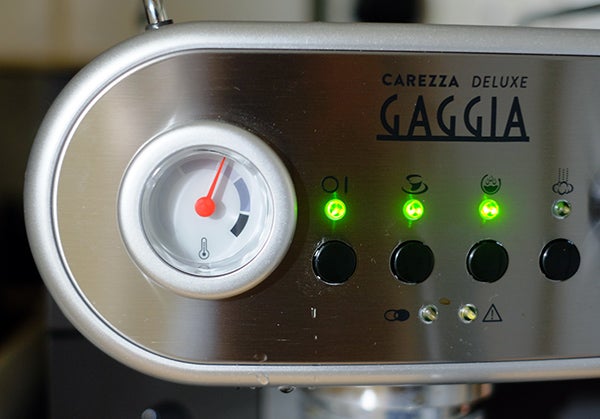 Gaggia Carezza Deluxe – How good is the coffee?

As we’ve already said, the Gaggia Carezza Deluxe is not a completely idiot-proof machine and you do need to learn how to use it a little. For example, there’s no tamper included, and if you’re not a little careful about how the grounds are arranged you can end up with quite a pale, weak crema.

Get up to speed, though, and the Gaggia Carezza Deluxe produces great coffee, with the rich, golden crema we look for. The benefit of having a set temperature means you’re not given too many ways to end up with overly bitter or burnt-tasting coffee. 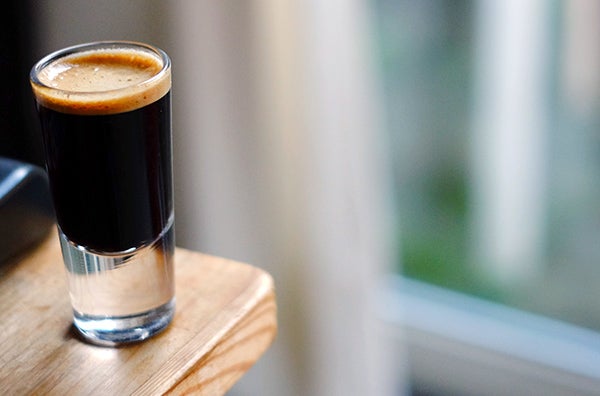 Not a bad way to fast-forward through early-morning groginess

If you’re not going to touch milk, your responsibility quality-wise is limited to choosing how much coffee to put in, and how tightly to pack/tamper it. We got good results with no manual compression of the coffee at all (the machine is designed to work without the need for a tamper) – there’s a learning curve to the Gaggia Carezza Deluxe, but making an Americano or espresso remains very easy indeed.

Frothing up milk with a steam spout naturally requires a bit of expertise, but we also found its occasional stop-start operation to be a complicating factor. The analogue-style control knob is also a slight red herring, with the actual delivery of both steam and water being much closer to a straight on/off relationship. Much like the temperature gauge, its design is as much for the pro look and feel it provides as anything else. 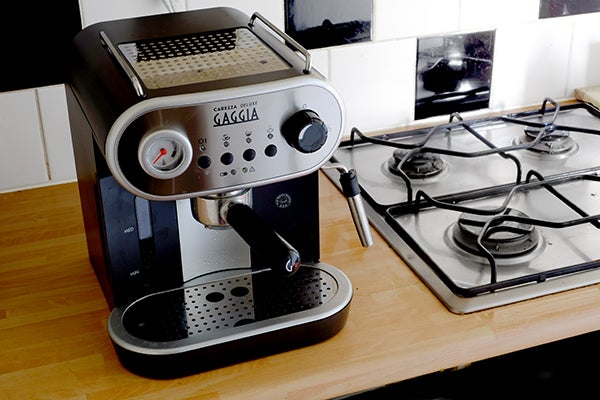 Should I buy the Gaggia Carezza Deluxe?

The Gaggia Carezza Deluxe is an accomplished espresso maker that provides great-tasting coffee and an eye-catching design that we imagine will be just what many people are after.

However, the way it operates means you don’t get quite the sense of direct control offered by the last manual espresso maker we reviewed, the Krups XP5210 – now available for a good deal less money. While its heating system provides very consistent results, you may find the quirks of its operation a little annoying.

A stylish espresso maker that produces great coffee, but with operation that takes a little getting used to.