Ask anyone in the TR office and you’ll probably find that we all like our notebooks as small as possible. Sure, a desktop replacement has its uses, as does a gaming notebook or a media notebook but as our activities often take us out of the office the smaller the notebook, the better. Thus the Fujitsu-Siemens Lifebook P7230 is certainly of interest, with the 10.6in display and 1.37kg weight putting it squarely in the ultra-portable bracket. Even more attractive is the internal HSDPA module which, along with the ubiquitous 802.11a/b/g wireless, gives the P7230 as much wireless connectivity as you’re ever likely to need short of strapping your own personal satellite to your back. 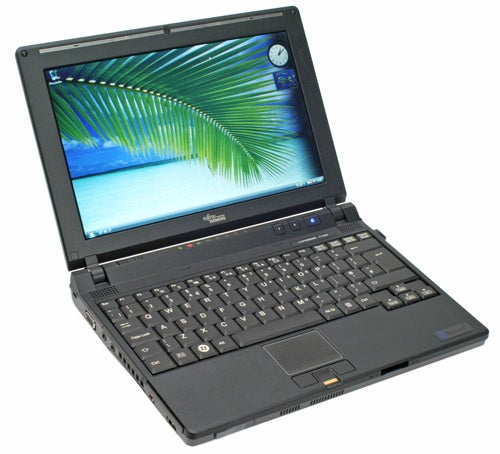 For around £1300 you get a notebook powered by the ultra-low voltage Intel U1400 Core Solo running at 1.20GHz, which has 2MB L2 Cache and a 533MHz Front Side Bus. There’s also 1GB of DRR2-533MHz RAM, a 60GB PATA 4200rpm hard drive, internal Super-Multi DVD Writer drive and Intel 945GMS graphics, which can just about handle the Aero interface of Vista Business Edition. Overall this makes it very comparable to the Samsung Q40 which Riyad looked at recently, sharing as it does the same processor, similar features and a focus on portability over raw performance. 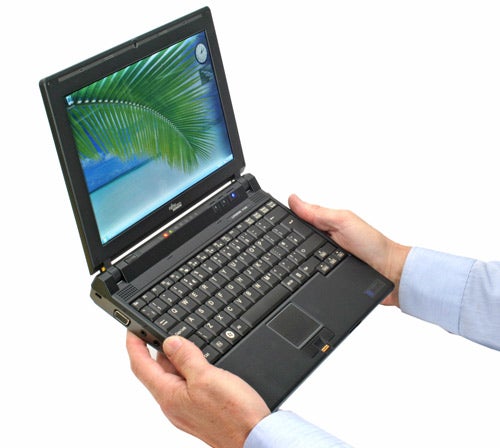 But here the P7230 does have another trick up its sleeve, because the optical drive is modular and can be removed in favour of a second battery for increased battery performance. Regrettably the second battery is sold separately, but it’s a great option for the mobile professional who needs extended battery life more than an optical drive.


Even without the second battery though, battery performance is very good. When using the notebook with wireless enabled and the screen at around 70 per cent brightness, the P7230 managed five hours while performing word processing and Internet browsing tasks. This is an impressive figure, and by reducing the screen brightness and disabling the wireless you could probably get a fair bit more.

Over time we’ve become accustomed to seeing Fujitsu-Siemens focussing squarely on the corporate market, and the P7230 does nothing to change this. It has a strictly low key design, finished in dull corporate black all round. There’s little in the way of eye catching touches, just functional design and solid construction. Measuring 272.9 x 200.9 x 29.9mm (WxDxH), the P7230 is slightly chunkier than the Q40 and other ultra-portables, but has an appreciably smaller footprint thanks to the 10.6in screen.


This is also a source of complaint, however, because at 10.6in corner to corner, and with a 1,280 x 768 native resolution, this screen is really very small. Even the Sony TZ1MN had a larger 11.1in screen, while the Q40 has a 12.1in screen, and neither of those would be considered large. This just seems to be a little too small for comfortable everyday use, and over time you’ll certainly miss having even an inch or two more. 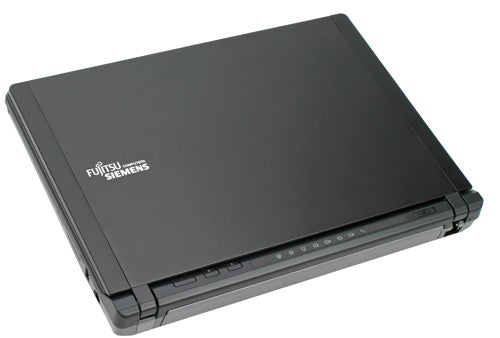 On the flip side, Fujitsu-Siemens claims this makes the P7230 perfect for using in cramped travelling environments such as on trains and planes. There’s some merit to this argument, but ultimately just a few more screen inches would make it far more pleasurable to use without disrupting its portability too much. Moreover, the P7230 actually has quite a thick bezel so it’s not as if Fujitsu-Siemens is utilising all the space available.


Quality wise the display is also something of a mixed bag. Being LED backlit it’s certainly bright enough, and the size relative to the resolution means it’s sufficiently sharp, but it has a rather mottled, almost pixelated look, it struggles with colour gradients and has a slightly yellowish white level. It also has a glossy finish, which makes it susceptible to reflections in high light environments and produces poor viewing angles. This is a shame, since the LED backlight, glossy screen in the Sony TZ1MN suffered from no such issues. All this probably makes it sound worse than it is, it’s still a perfectly usable display, just don’t expect amazing colour accuracy or contrast.


The screen also suffers from light bleed particularly at the bottom, but also from the top. This is an issue that Sony had when it first implemented LED backlight screen technology, with the VAIO TX1XP having significant light bleed issues. Thankfully this was resolved on future TX series products, so I would hope that Fujitsu-Siemens will be able to do the same on the next P Series machine. 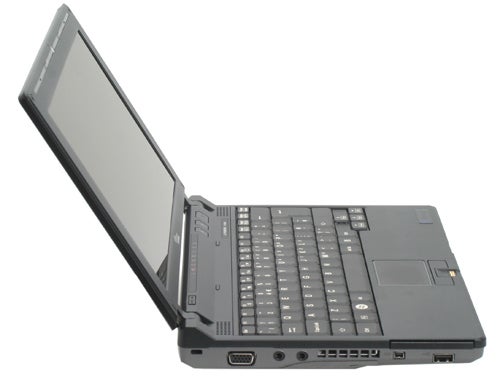 Happily other aspects of the P7230 are far more pleasing. The keyboard, for example, is particularly praiseworthy sporting a layout that makes a mockery of larger notebooks – such as the Evesham Zieo – that manage to make a mess of things despite having acres of space with which to work.


For starters the left Ctrl key is in the correct place, on the far left and to the left of the Fn key. There’s a proper UK style Return key, and a large Right Shift key with slightly offset cursor keys just below it, which also double up as PgUp, PgDn, Home and End keys via the Fn key. The keys themselves are crisp and even, providing a positive feedback when pressed. Overall it’s a great notebook keyboard, and will garner few complaints. 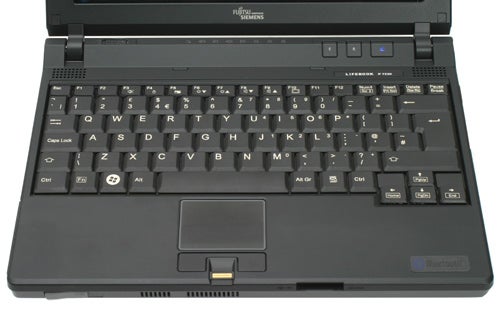 There are also plenty of other attractive features, such as a fingerprint reader which is located between the two touchpad buttons and a 1.3-megapixel camera which is built into the bezel just above the screen. This is flanked by two Microphones, and this enables VoIP and video conference calling out of the box. To add further to the corporate attractiveness, there’s also a Trusted Platform Module (TPM) which provides added data security in the event of theft.

Connections wise the P7230 is unsurprisingly not over populated. On the left edge there’s D-Sub, headphone, microphone and FireWire ports, one USB port and a Type II PC Card slot, while the main air outlet is also located on the left edge. Considering the inclusion of HSDPA, a PC Card would appear redundant but it’s there nonetheless – probably as a legacy of a non-HSDPA equipped model.

On the front there’s a card reader, with support for SD, MMC, xD and Memory Stick Pro formats. There’s also a small latch on the front for PC Card eject mechanism, and to the right of that another small vent.


On the right is the optical drive, along with another vertically mounted USB port and the DC input. Finally, on the back, is the Ethernet port and the L7230 has Gigabit Ethernet so is well catered for here too. There’s no modem, although there is a blanked out port at the rear where I assume the modem socket used to be. Purchasing a Port Replicator, which slots into a port on the bottom on the machine, adds three more USB ports, S-Video, Line-out (S/PDIF) and further D-Sub, Ethernet and DC-in ports.

As with many HSDPA notebooks, the SIM card slot is located behind the battery which must be removed to insert a SIM. This is something of an inconvenience, and certainly isn’t as elegant as the Q40’s solution, but it isn’t too much of an inconvenience provided you don’t use the same SIM for different devices.


The HSDPA module is provided by Sierra Wireless, and once you have a SIM in there it’s a breeze to get connected and start using the Data and Voice functionality. Together with Gigabit Ethernet and 802.11a/b/g wireless you are, as previously noted, very well covered for connectivity, and Bluetooth 2.0 only adds to this. Since this is based on older hardware there’s no Draft-N wireless, but this is hardly essential in the business environment where high bandwidth streaming isn’t necessary. 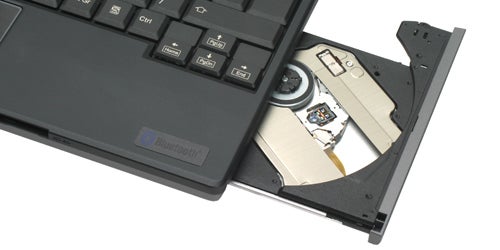 PC Mark 05 tests threw up some surprising results. Despite sharing the same CPU as the Samsung Q40 and having less memory, the Lifebook P7230 managed higher scores in the CPU and Memory tests. Despite this the overall scores were similar, probably because the P7230 lags severely behind in the hard drive tests. As Riyad often points out, performance on an ultra-portable is something of a bonus rather than a necessity and the P7230 does enough for its target market. 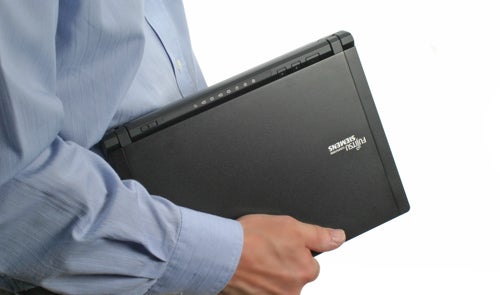 Rather like the Samsung Q40, the P7230 uses some slightly dated components but fulfils the role of an ultra-portable well. HSDPA is obviously the key feature in this, but other features such as the fingerprint reader, camera, TPM security and hard drive shock proofing make it a good option for the corporate user. But with the Q40 being £100 less expensive, with a better screen, a generally more attractive chassis and two batteries in the box, it just seems like the better option. 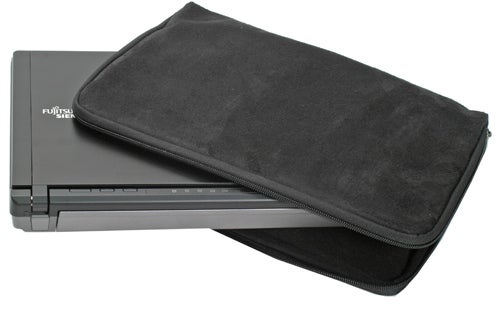 
A very capable corporate ultra-portable, the Lifebook P7230’s lack of panache, poor screen and dated hardware count against the more attractive competition. Still, if you’re after an ultra-portable with HSDPA and an integrated optical drive, it does fit the bill nicely.