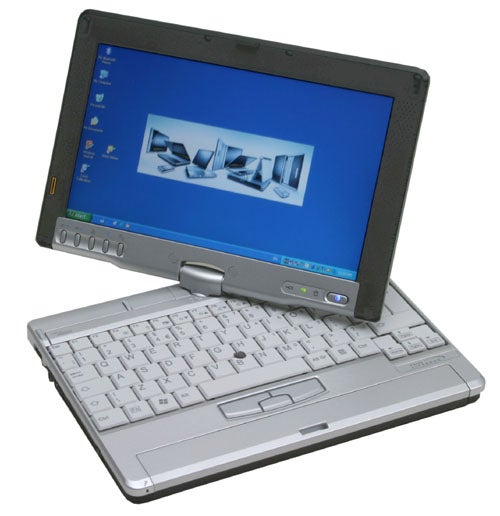 Don’t expect it to be able to compete with bigger laptops in terms of raw performance as the ultra-low voltage Pentium M 753 processor is only clocked at 1.2GHz. It has 2MB of cache and operates at a 400MHz bus. The chipset is the Intel 915GMS, which is a 400MHz bus version of the 915GM and only supports single channel DDR2 memory. A single 512MB 400MHz DDR2 micro DIMM module comes as standard, but as there is only one memory slot; this can not be expanded without discarding the fitted module.


8MBs of system memory is shared with the integrated Intel 915GM graphics controller, but up to 128MB can be dynamically allocated if need be. Due to its diminutive size Fujitsu-Siemens has gone with a 1.8in Toshiba hard drive offering 60GBs. This spins at a relatively slow 4,200rpm, not quite up to scratch with the current crop of 2.5in hard drives. 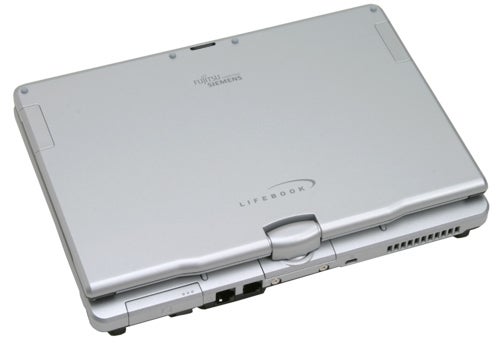 The Lifebook P1510 wears the Centrino branding, possessing an Intel PRO/Wireless 2915ABG Wi-Fi card, supporting 802.11 a/b/g networks. Add to this built in Bluetooth, 10/100Mbit wired Ethernet and a 56k V.90 modem and you’ve got pretty much everything covered. The wireless antenna can be disabled with a hardware switch on the right hand side of the laptop during flights.

An unusual design feature is that the battery is fitted to the front of the Lifebook P1510. However, if you opt for the extended battery – it should retail for around £45 – you’ll find that it actually gives you an extended wrist rest, which is actually quite handy on such as small notebook. 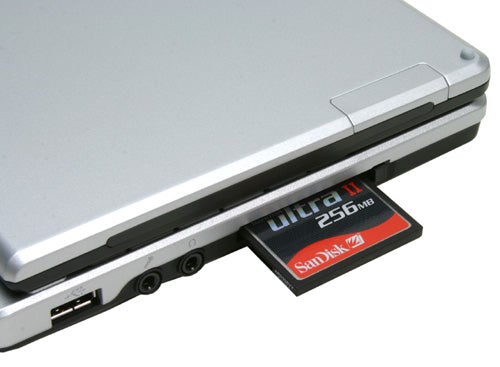 As a consequence, there are no ports on the front of the laptop. Instead, they’re all located on the sides or the rear. On the left hand side you’ll find a Compact Flash card slot, a headphone and microphone socket and a single USB 2.0 port. Around the back is the modem and Ethernet connector as well as a covered D-Sub connector. The right hand side is home to the power connector, a second USB 2.0 port, an SD card reader and the stylus. What’s missing is a PC Card slot, so if you have something like a 3G data card, this can’t be used with the Lifebook P1510.


The screen is a tiny 8.9in, 1,024 x 600 resolution, touch sensitive affair with a very good viewing angle. The latter is very important on a Tablet PC, as you’ll be using it in both landscape and portrait mode, something that you wouldn’t normally do with a notebook. The touch sensitive layer on the screen reduces the image quality to a degree, but not enough to be annoying. 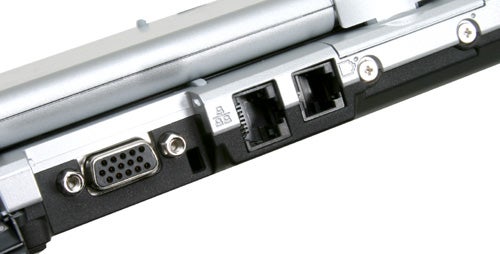 The Lifebook P1510 has a couple of interesting security features, but the most noticeable one is the screen mounted fingerprint reader. This works together with a Windows application and unless it’s provided a correct fingerprint at login, you won’t be able to access any information on the hard drive. However, it’s not entirely secure, since there’s no pre-boot application, so the hard drive can still be removed and the information accessed. This is also the first laptop I’ve come across that features a Trusted Platform Module – TPM for short – although there are so far very few applications that take advantage of it.

In notebook mode the Lifebook P1510 is very much like any other ultra portable notebook – it’s got a tiny keyboard. It’s not unusable by any means, but touch typing is undeniably difficult. On the plus side all the keys are where you expect them to be and the track point, hidden away in the middle of the keyboard, works well.


As a Tablet PC the Lifebook P1510 is effective. It has an active screen and a passive stylus, much like a PDA, which means that you can use pretty much anything, even your finger, as the input device. However, I’ve seen competing Tablet PCs that operate the other way round, with an active pen and a passive screen. I would prefer this method, as the screen on Tablets with this type of solution looked slightly better to me. 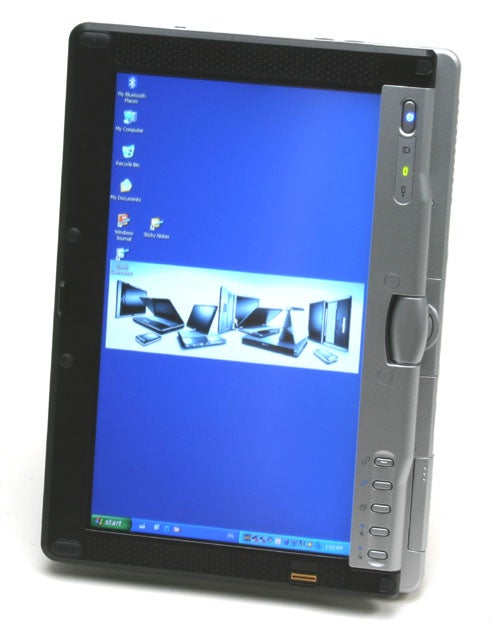 The stylus supplied with the LifeBook has a spring loaded tip, presumably to reduce damage to the screen and also helps lock it in place in its slot.


One of the buttons on one side of the screen enables you to rotate the screen. A software utility lets you set up which directions you want to rotate it in and you can choose between four different options. The other buttons can be programmed in a similar manner using the supplied software.


You don’t get a whole lot of application software with the Lifebook P1510, but a copy of Corel Grafigo is included, which is similar to Microsofts OneNote. For backup and security Fujitsu-Siemens supplies a copy of Norton Ghost 2003 and F-Secure Antivirus with a years worth of updates. 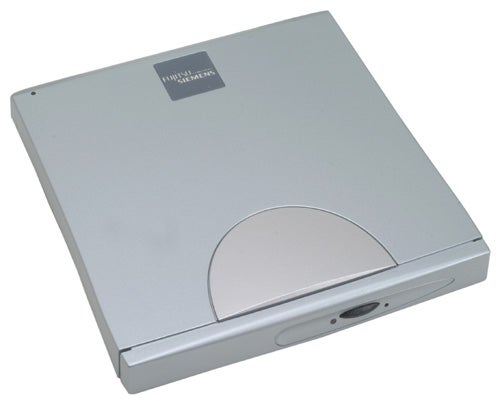 As you might have noticed, the Lifebook P1510 doesn’t have a built in optical drive. Instead, it is shipped with an external drive – this might be optional in some countries – and Fujitsu-Siemens UK have opted for a DVD writer as standard. This has a built in battery, so it won’t tax the Lifebook’s battery when used on the move and connects via USB 2.0. An optional docking slice is also available for around £42, which replicates the Ethernet connector, two USB 2.0 ports, the D-SUB connector and the power connector.

General performance isn’t breathtaking, with a SYSMark 2002 score of 152, but it is more than fast enough for its intended use and never felt sluggish or slow during general usage. There where some problems running PCMark 2005, but this had to do with the odd resolution of the screen rather than the Lifebook P1510 not having the hardware capabilities to perform the tasks, thus the overall score and the graphics scores are missing.


At £1541.60 I think the Lifebook P1510 is pretty good value for money. It does have limitations, but it is a great little machine especially when you consider that it weighs a diminutive 1kg. A touch smaller and it could almost be carried in a pocket.


With the Lifebook P1510, Fujitsu-Siemens breaks new grounds for the Tablet PC format, in terms of size, weight and portability. It’s a great tiny laptop that can do more than your average notebook and it doesn’t cost a fortune either.


”’N.B.”’ Please note that the Lifebook P1510 won’t be available to purchase until the middle of October