Although the Fujitsu-Siemens AMILO M3438G is not the first 17in widescreen laptop we’ve seen here at TrustedReviews, it is one of the better looking ones. It might not be quite up to the standard of the Dell Inspiron XPS Gen 2, but it’s a definite step up from some of the earlier machines we have reviewed. 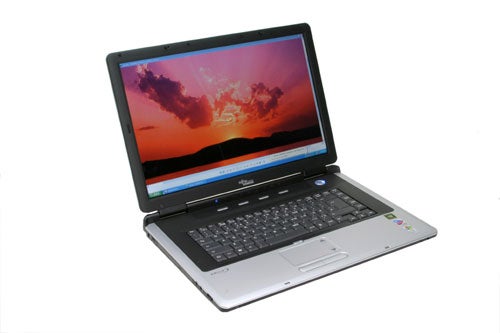 It is also one of only a handful of machines to have a GeForce GO 6800 graphics chipset and this one is paired with 256MB of graphics memory. Not a bad start, especially if you’re after a mobile gaming solution. The high-end features don’t stop here though, as our review sample was fitted with 1GB of DDR2 memory and a 2GHz Pentium M 760 processor.


Fujitsu-Siemens offers a wide range of configurations for the AMILO M3438G – all with a GeForce GO 6800 graphics card and 17in display – so there are models to fit most pockets with the most basic version costing less than £1,000 inc VAT. 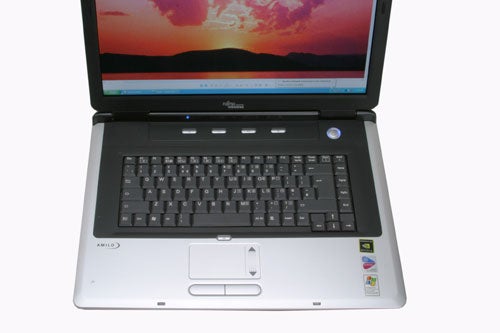 The notebook is based on the i915PM chipset, which is currently the top of the range mobile solution. This, alongside the Intel Pro/Wireless 2200BG 802.11b/g WiFi network card means that the AMILO M3438G is Centrino branded. There’s a switch on the front of the laptop to enable/disable the wireless antenna. Gigabit wired Ethernet is also part of the specification along with a dialup 56k V90 modem.


Our review model came with a single 80GB SATA hard drive, although models with up to 120GB drives are available. More interestingly, Fujitsu-Siemens also has models with RAID configurations available, although so far the only one I have seen on sale has twin 80GB drives. The drive supplied with this machine was from Fujitsu and has an 8MB cache and operates at 5,400rpm – not too shabby for a notebook drive.


There are plenty of features to go yet, so let’s start with the left hand side of the chassis. The first thing here is a volume control wheel – I really like hardware controls like this as it makes it much easier to adjust the volume on the fly. There’s also microphone and headphone sockets – with the headphone socket also doubling up as optical S/PDIF out. The AMILO M3438G features Intel HD audio and although you won’t get more than stereo sound out of it, the quality is far superior to AC97. The built in speakers are helped by a small subwoofer to add that bit of extra bass to the sound, although most gamers would most likely use headphones. 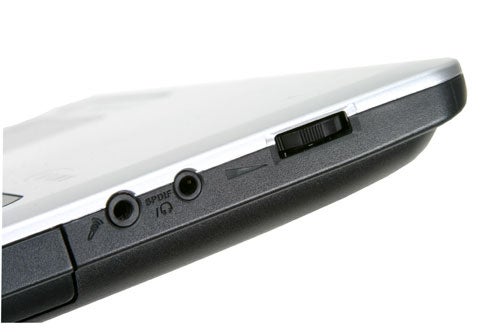 Next up is the optical drive and just behind that are a single USB 2.0 port and the power connector. Around the back is the modem connector along with DVI and S-Video outputs – in case you want to attach your laptop to an external screen, TV or projector.


The right hand side is home to the Ethernet connector, a 4-in-1 card reader for SD, MMC, MemoryStick and MemoryStick Pro cards, a four-pin FireWire connector, three more USB 2.0 ports and an ExpressCard slot. The ExpressCard slot is also the home of the included remote control with which you can control the InstantOn media playback features. Finally the front only has two features worth pointing out, the on/off switch for the wireless antenna and an infrared receiver for the remote control – this is not an IrDA port so it doesn’t work with other IrDA devices. 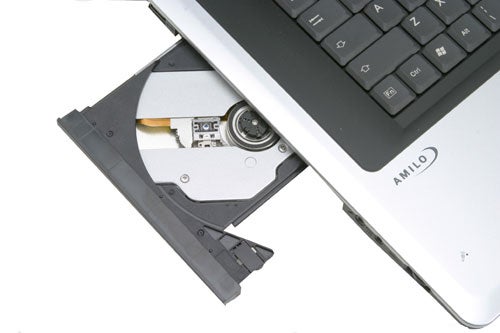 The AMILO M3438G isn’t perfect though as there are a couple of corners that have been cut to keep the price down. First of all the display is limited to 1,440 x 900 which is quite low for a widescreen 17in panel, although a 1,920 x 1,200 model should crop up later this year. Both screens are of the new reflective but high contrast type, which makes the AMILO M3438G great for watching video content and playing games on, but less ideal for working outdoors on.


The memory is also slightly disappointing, as Fujitsu-Siemens has fitted 400MHz modules rather than 533MHz modules – something that has been done to keep the cost down. With the processor running on a 533MHz bus I would have expected to find 533MHz modules. How much of a performance gain you would get is hard to tell, but since this is a gaming laptop it’s a bit of a shame. There are two SO-DIMM slots and both are populated for dual-channel operation. 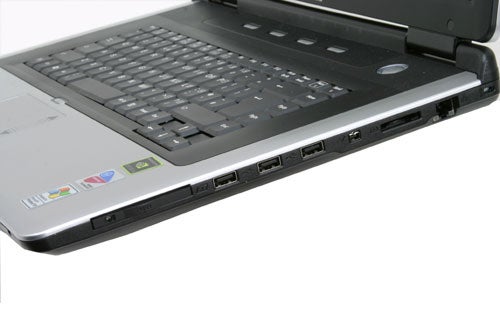 The keyboard is quite comfortable to type on with almost full-size keys all around. I only have one minor complaint here and that is that the Fn key is located where you expect to find the Ctrl key, something that a lot of gamers won’t like – the Ctrl key tends to be used in most first person shooter games. The touchpad is responsive and has a scrolling section to one side – it can also be disabled by pressing a small button above it.


Just below the screen are four quick access buttons. From left to right we have the InstantOn button – for the built in pre-Windows media player – Internet browser, email and finally a button that lowers the fan noise – something that shouldn’t be used while playing games as the 6800 graphics card gets quite hot. 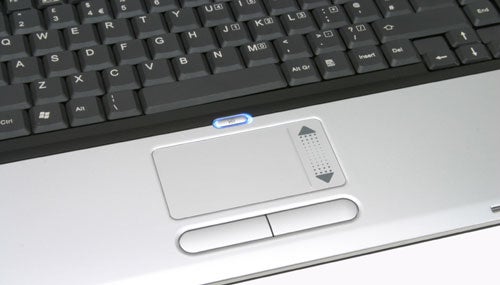 Fujitsu-Siemens also supplies a copy of Microsoft Works Suite 2004 which contains a full copy of Word 2002 alongside a host of other applications – definitely a worthwhile inclusion with any machine.


Looking at the benchmark numbers there is little to complain about with an overall SYSMark 2002 score of 249 and an overall PCMark 2005 score of 3089. That’s neck and neck with the Acer Ferrari 4000. Battery life is not great, but acceptable with 146 minutes in the standard test and 134 minutes in the DVD playback test. 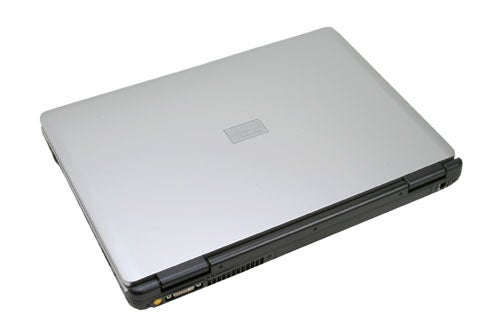 Gaming performance is good, although it doesn’t beat the Dell Inspiron XPS Gen 2 by any means, but it’s really not bad for a laptop almost half its price. You shouldn’t have any problems playing most current games on this machine and even some of the next generation games, as long as you don’t enable too many image quality features.


However, you might want to pause one moment before you rush out and buy one of these as a replacement for your current LAN party rig, as it’s not as nimble as you might first think. At 4.1kg and measuring 408 x 289 x 38.1 mm (WxDxH) it’s still quite chunky and it’s no match for a real PC in terms of performance. That said, it is one of the most affordable alternatives to a full blown PC if you want to play games. 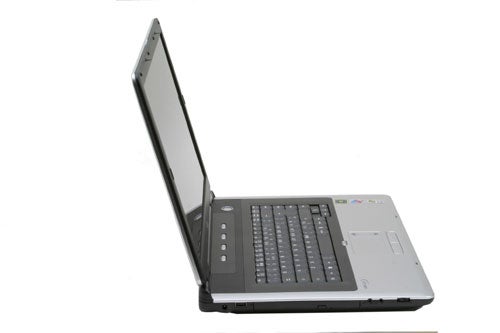 At £1239.99 for the model on review the AMILO M3438G is something of a bargain for anyone looking for a mobile gaming machine that can be used for more than just games. It’s also looks pretty good, while the Fujitsu-Siemens branding will give some nervous buyers peace of mind.


Compared to other 17in gaming notebooks, the Fujitsu-Siemens Amilo M3438G looks very tempting. It may not be as fast or look as cool as the Dell XPS Gen 2, but it is well built and the price makes it a bit of a bargain.