While the adage, “you get what you pay for” has much truth to it it most cases, it’s pleasing to see that you don’t have to spend a fortune to get a decent notebook. With the AMILO L1310G, Fujitsu Siemens has set out to create an affordable notebook with no crippling compromises and by and large, it has succeeded.


The sticker on the front of the chassis is an indicator of the first area of cost saving. The badge says Intel Celeron M inside, rather than Pentium M. The difference between the two is that the former has half the Level 2 cache, 1MB, and does not feature SpeedStep power saving technology, which powers down parts of the processor when it detects that it’s not required. This is probably the biggest drawback of the system as on the move the CPU will be running at full pelt all the time – not great when the battery life isn’t outstanding in the first place. This is also why Intel doesn’t afford the Centrino branding to Celeron M powered machines, even if Wi-Fi is built in, as it is here. 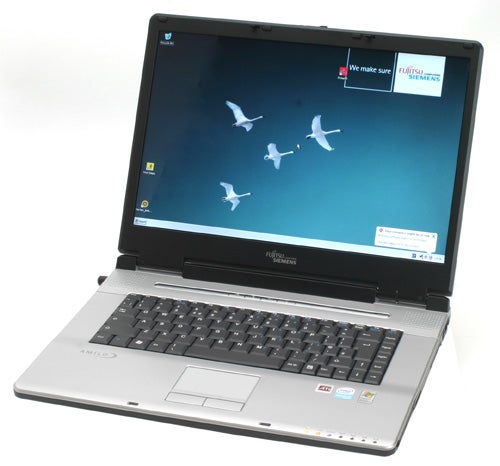 However, I don’t see this being bought for regular use on the move. For one, , at 2.8Kg, it’s a bit too heavy to be comfortable carrying every day and it’s also on the bulky side. At least you’re compensated by the presence of a decent keyboard with keys that are sensibly sized and arranged. The keypad is also very solid with none of the flex that cheap notebooks often have. This makes the AMILO really quite comfortable to type on. The trackpad is a run-of-the-mill affair but I did find that I unintentionally tapped it on several occasions sending my cursor off into uncharted waters. I prefer trackpoints but you’re not going to see that at this price.


Should you place it on your lap you’ll find that the notebook is well balanced and comfortable, at least at first. After extended use, the warm air expelled out of the CPU fan on the underside and on the right will start to hurt your heat up your leg uncomfortably. When CPU temperature gets too high the fan spins up and is noticeable, but it didn’t spin up while watching a DVD. 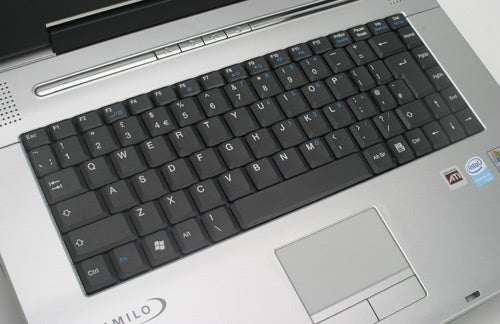 The largish size also means you’re provided with a very decent 15.4in widescreen display. The 1,280 x 800 resolution isn’t the highest at this size, but it’s what you’d expect at this price. There a coating on the screen that boosts colour and contrast at the expense of increased reflectivity but it’s not too bad in this regard, even under lights. The wide screen certainly does no harm when you’re watching DVDs, and delivered a smooth performance when tested with a fast motion film such as House of the Flying Daggers. The combination of CPU and screen also means that there’s enough grunt to watch 720p content without dropped frames, when tested with a H.264 encoded film trailer from www.apple.com/trailers.

Sound wise it’s good news too as the built-in speakers are reasonably loud, with no real unpleasant distortion. If you do want to hook up to a surround sound system then you’ll appreciate that the headphone out doubles up as an S/PDIF output.


Returning to the CPU, the model of Celeron M is a 370, which means that it runs at 1.5GHz. Don’t worry that this doesn’t match up to Pentium 4 clocks, the M designation means that this is an efficient mobile processor and you’ll find it fast and responsive for everyday tasks.

The memory complement might be more of an issue as there’s only 512MB supplied. This has been supplied on two DIMMs, in order to keep the system running in dual-channel mode, but the result is that there are no free slots for upgrading. However, can buy with 1GB of memory and a bigger hard disk, but that’s £137 more, making it not quite as good value as this one. If you’ve going to limit yourself to light tasks then the 512MB will be fine, but if you want to be more adventurous, say video editing or working on multiple images. it might become a limiting factor.


If you’re looking to play games on the notebook then to be honest this isn’t the machine for you. The 3DMark 03 score of just over 800 is all the indicator that you need that the integrated graphics on the Radeon Xpress 200 chipset isn’t up to the task. Video playback is very good however, and you get both VGA and S-Video outputs. 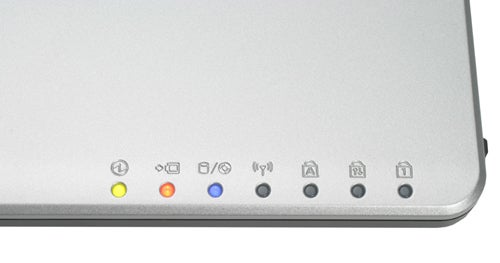 One problem that budget notebooks often have is that they really look it. However, the AMILO looks more expensive than it actually is. When closed the silver finish looks smart and is really set off my the thick stripe that sits in the middle of the lid with the Fujitsu Siemens logo on it. Open it up and the rounded edges soften the look. Perhaps the four shortcut keys in the silver bar at the top would have looked a bit cooler with a blue backlight, but you can’t have everything. The line of lights on the bottom right of the open machine do look neat though.


The machine doesn’t feel quite as solid as more expensive models with some flex and give, but there was nothing loose or rattling. The DVD drive did pop open when brushed rather easily, so care needs to be taken.

Looking round the machine you’ll find a 10/100 (not Gigabit) network port on the right at the rear. Next to this is the aforementioned S-Video port. You’ll then find an SD card reader, a 4-pin FireWire port and a PC Card slot. On the left are headphone/S/PDIF and a microphone port, useful for Skype headsets, and two USB ports and a modem. The DVD-Writer is on the left and will burn dual layer discs though only at a leisurely 2.4x speed. The VGA port is at the rear on the right, along with another two USB ports – making four in total. Permanent storage is handled by a 60GB drive. It spins at 4,200rpm. so it’s never going to be a speed demon, but it’s in keeping with the rest of the system specification.

As you’ll see from the performance scores this machine is not going to break any records and its inevitably going to show its age a lot sooner than a system with a dual-core CPU. Battery life is very average and if you’re watching a movie away from a power socket then you’ll struggle to finish a film much past an hour and half-long. However, if you’re looking to a machine for browsing the web, checking email, editing the odd picture and watching DVDs, that won’t break the proverbial, then this will do nicely.


This machine is not going to make any headlines but succeeds as an inoffensive machine that’s pleasant to use, fine to look at and not too painful on the wallet. It’s not really suitable for regular use on the move or for gaming, but as a household workhorse, it’s a winner.