There’s big, and then there’s Fujitsu’s P63XHA40. This plasma monster measures in with a screen size of 63in, making it one of the biggest flat-screen TVs ever to grace (break?!) UK shop shelves. But as any bloke will tell you, size isn’t everything. So has the P63XHA40 got the quality to match its quantity?


It’s nice to find for starters that Fujitsu has tried to make the P63XHA40 as unobtrusive as anything with a 63in screen can be. The screen’s bezel is exceptionally thin, yet it also feels effortlessly robust, as well as benefiting from a subtle silver finish that sensibly eschews the more aggressive looks favoured by many smaller flat TVs.


The P63XHA40’s slender frame hides a dirty secret, though: the set doesn’t come with any speakers. Fujitsu does an optional detachable pair, but these will set you back a couple of hundred notes more, and attaching them to the screen inevitably ups the TV’s dimensions. Still, we suspect many people seriously considering forking out £9k on a screen will probably have or be thinking of getting a separate surround sound audio system anyway. 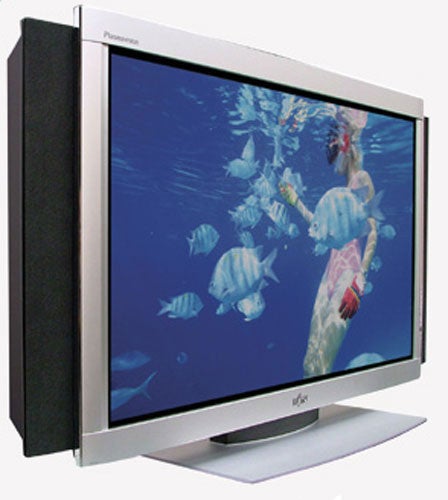 The lack of SCARTs is presumably a reflection of either the screen’s American roots, or the fact that it’s made more for the business than the home market.


Since the P63XHA60 appears under the ‘home cinema’ section of Fujitsu’s website, we guess we’ll go for the former explanation – which also bodes better for other aspects of the Fujitsu’s features and performance.


But we have to say that whatever the explanation, omitting the SCARTs seems rather lazy on Fujitsu’s part. And it means that if you want to get an RGB-quality picture from, say, a current Sky digital receiver into the P63XHA40, you’re going to have to buy an RGB SCART to component video adaptor box from someone like www.keene.co.uk.

While this Fujitsu may not have much time for standard definition connections, however, it’s far keener on its high definition connectivity, with one HDMI and two component video inputs on hand for your HD sources. PC users who fancy World of Warcraft on a 63in screen, meanwhile, will be pleased to spot a D-Sub PC jack, too.


As you’d expect of such a plasma giant, the P63XHA40 is fully HD Ready, with the HD connections we mentioned a moment ago being joined by a sufficiently high native resolution of 1,366 x 768. We have to admit that we’d half hoped for a native 1,920 x 1,080 resolution from such an epic screen – but that would probably have doubled the price tag, so we guess we’ll let it slide. 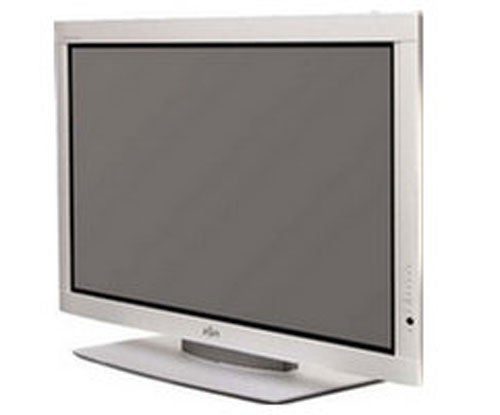 The next significant feature of the P63XHA40 is its AVMII picture processing. This plays host to a whole host of separate picture tweaks, including MPEG noise reduction (for reducing the blockiness sometimes seen from DVDs and digital broadcasts); edge ghosting noise reduction; mosquito noise reduction for suppressing the pixel noise that can occur around digital edges; reducing of the jaggedness that can affect contoured edges; and a motion enhancer for making movement in a picture look clearer and smoother.


The final trick of the P63XHA40 worthy of note is a ‘white-screen’ measure for tackling screen burn. Screen burn, in case you’re not familiar with it, can occur in plasma TVs if you leave a bright picture feature, such as a channel logo, onscreen for too long. The pixels in the bright area get ‘tired’ by their extended exposure, leaving a faint shadow of the bright picture feature permanently etched into the screen. Fujitsu’s white screen feature combats this issue by flooding the screen with pure white, to re-equalise the pixel exposure across the screen.

And so to the moment we’ve been gagging to get to: how the P63XHA40 shapes up with our lovely assortment of HD and standard definition sources. Starting out with HD, the news is for the most part spectacularly good. Especially striking is the staggering sharpness of its HD pictures. If you really want to appreciate the full extent of what an impact the extra detail in a good HD image can make, you won’t find a better showcase than this Fujitsu.


With the outstandingly detailed visuals of Fight Night 3 on our Xbox 360, for instance, every pore and bead of sweat on the boxers’ pummelled faces is gloriously, almost disturbingly clear. And with any of our selection of HD movies, the amount of fine detailing and texture the P63XHA40 delivers turns watching them into an experience akin to looking through a (big!) window at a real world rather than watching a TV.

Of course, this latter statement wouldn’t hold true if a number of other factors didn’t also come out well on the P63XHA40. These include the screen’s impressive suppression of most forms of video noise with HD, and a black level response that gets deep enough to reproduce dark scenes and picture segments free of the greying over and hollowness that afflicts many flat panel TVs. Also key is how natural colours look with high definition sources, combining attractive vibrancy with some generally natural tones.


The problem with the P63XHA40 is that while its HD pictures are first rate, its standard definition efforts are far less rewarding. Step down from HD and the amount of noise in the picture increases exponentially. What’s more, the picture starts to look far less sharp – so much so, in fact, that some SD sources look almost out of focus.

As for the P63XHA40’s speakers, they’re actually pretty good, with plenty of power and frequency range helping them sound clean and punchy. That said, we don’t really think they justify their £200-plus cost.


How desirable the P63XA40 is depends almost totally on what you intend to use it for. If you’re looking for a partner for a planned high definition set up, you simply won’t find anything better – hence our score of 9 for its pictures. But if standard definition sources are your main TV diet, your £9k might be better spent elsewhere.