Ever since they first started appearing, we’ve been convinced of the merits of USB powered portable hard drives. From the tiny capacity earliest attempts that are put to shame by modern flash USB drives, to the latest versions that pack in hundreds of Gigabytes, we’ve always welcomed their combination of portability, reusability, and (relatively) high capacity. Indeed they are one of the few items we would recommend everyone has at least one of.


Even if you don’t regularly transport large files around, they are incredibly useful for storing backup files, or keeping your multimedia collection on, so you can take it with you wherever you go. Also, if you have an ultra portable laptop that has a small hard drive, they’re very useful for providing additional portable storage. 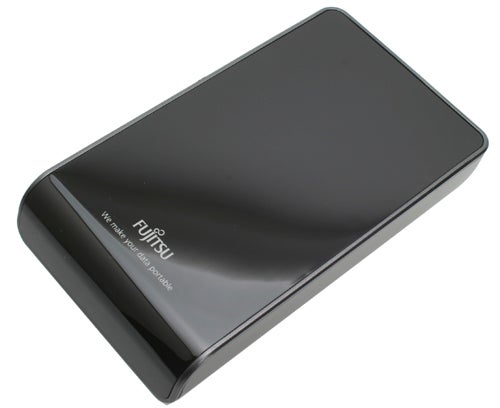 So, if they’re all so amazing, surely you should just go out and buy the biggest one you can afford and be done with it? Well, as we all know, things are never that simple and there’s always a little more to consider before you should make your final decision. That’s why we take a good look over every drive we get a chance to and the one that’s going under the knife today is Fujitsu’s latest HandyDrive.


As we’ve seen recently, some drives, like the Memorex Ultra TravelDrive, pack in a whole host of extra features to make them stand out from the crowd. Conversely, others have gone the other route, opting for style over features. The particular HandyDrive I’m looking at today, though, is somewhere in between these two extremes. 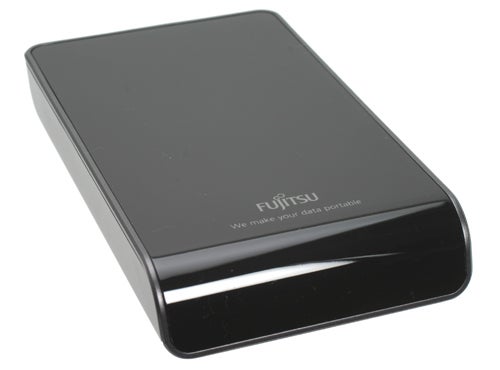 Ostensibly, the drive is just another sleek and stylish but basic portable hard drive, like the Western Digital Passport. At its heart is a 2.5in notebook hard drive that you access simply by plugging it into your computer using the provided USB cable. Power and data are carried over the same cable and Windows will recognise the drive straight away and install it for you, just like any other portable hard drive. However, the HandyDrive does have one rather impressive trick up its slick and that’s its sheer capacity, which at 300GB is the largest we’ve ever seen.


Ok, Buffalo and Western Digital have both just announced 320GB versions of their own portable hard drives but, as of writing this, they aren’t available in the shops so Fujitsu still has the upper hand for now. 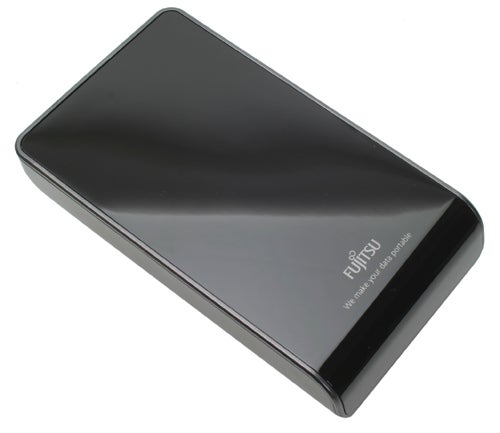 As I’ve already hinted, the latest HandyDrive is a suitably sleek looking affair with a semi-transparent glossy black top performing its usual fingerprint and dust attracting duties with aplomb. A plain painted metallic grey bottom section sets things off nicely and the whole thing simply looks the figure of understated class. However, that’s not to say it’s without its problems.

The first and most obvious ‘feature’ is the drive’s size that, at 22mm thick, is nearly 50 per cent fatter than, arguably, its main sleek-and-black contender the Western Digital Passport. Also, with a weight of 255 grams, it again falls short of the Passport’s relatively featherweight 184 grams. That said, the extra capacity of the drive goes some way to making up for this.


A green LED hidden below the top surface indicates power and drive activity, flashing on and off in accordance with the latter. It’s nice to see a change from the in-vogue blue lights that adorn so many devices nowadays but, as I always say, if you’re going to go with a safe design, surely a more universally appealing white light would be more sensible? I’ll leave that one for you to decide, though.

Four little rubber feet help prevent the drive from slipping and sliding around on your desk but, and this really is being picky, I couldn’t help but notice the feet were all on a bit wonky and they look like they could fall off any minute. A quick bit of vigorous rubbing revealed that they were in fact quite secure but still, wonky is bad!


Moving on from these more esoteric complaints, the HandyDrive has two rubber flaps that cover the power and data ports on the back edge of the case. They operate individually so unused ports aren’t left exposed and when closed they are secure enough not to pop open inadvertently. If your everyday bag is anything like mine, having something to help prevent dust and grime getting into your device is a welcome addition. However, there’s something else that comes with the HandyDrive that could make them rather unnecessary. 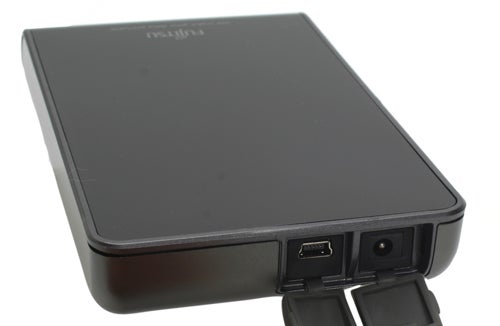 You see, one of my regular complaints about having fancy, shiny devices is that they tend to scratch all too easily and I have no doubt the top surface of the HandyDrive would suffer from this problem as well. Pleasing, so it is then, to find a leatherette carry case included with this disk. With one large pocket for the drive, a small lid with integrated cable holder (oh how I’ve longed for a case that has this), and a large flap that encloses the lot, your drive should be very well protected. 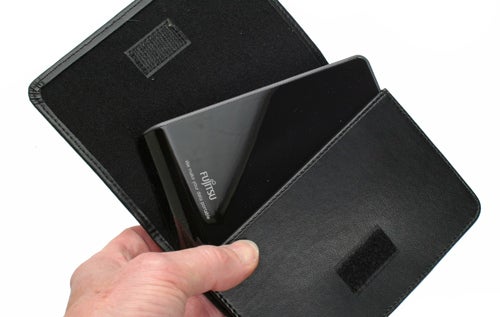 Unfortunately, a major downside to the bump in capacity is a necessary reduction in the spindle speed, which has dropped from 5,400rpm to 4,200rpm, to keep temperatures manageable. Overall transfer rate of the HandyDrive is largely limited by its USB 2.0 connection so you may not notice a difference in speed when simply transferring large files. However, if you regularly access the drive for small files or perform any task that requires multiple read and write operations at once, you may find the increased access time a bit of a nuisance.


The final weapon in the HandyDrive’s arsenal is some basic password protection software that enables you to lock the drive – making it invisible to Windows – until the password is entered. It’s simple and intuitive to use and makes for a useful addition to the overall package. However, it does come in place of the oft included backup software so it’s less a bonus than an alternative.


On the surface the 300GB Fujitsu HandyDrive has a number of problems like its bulky frame and below par performance. However, these minor issues are more than made up for by the sheer capacity, elegant design, and quite simply the fact it ships with a convenient carry case. 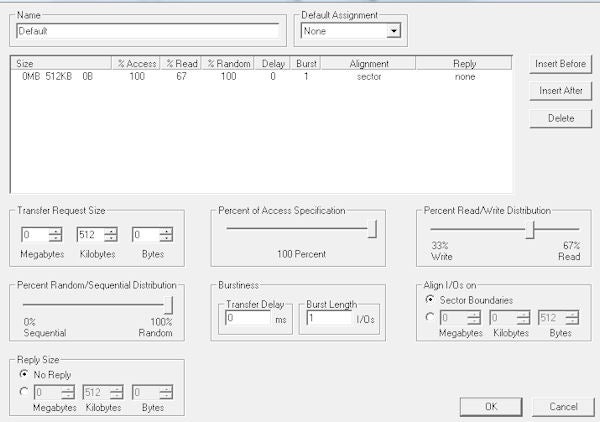 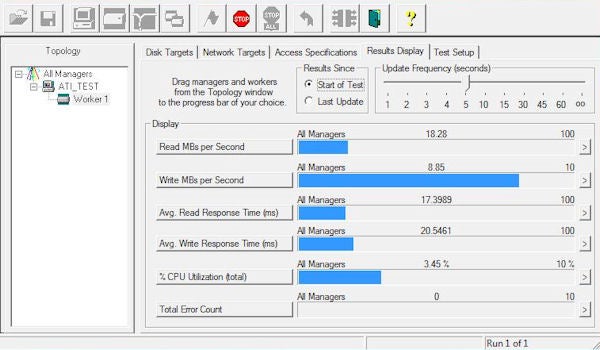 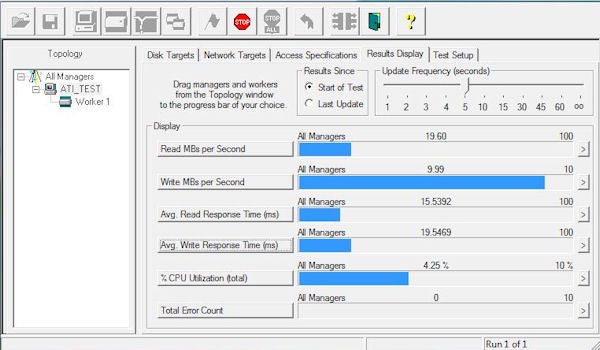 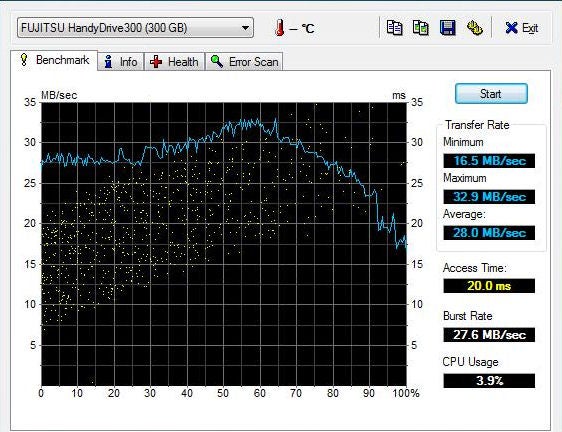 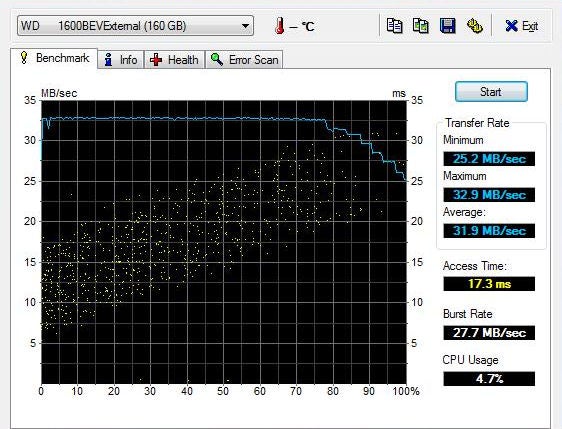