If you’re in the market specifically for waterproof compact to take
to the beach or on holiday then be sure to take a look at our round-up
of the Best Waterproof Cameras.

The Fuji XP150 is the new flagship model within Fuji’s XP range of ruggedised compact digital cameras and sits directly above the cheaper XP100 and XP50 models. As with all XP models it is purpose built for active use outdoors in all weathers, and as such is waterproofed to 10m, freeze-proofed to -10˚C, shock-proofed to 2m and sealed against dust and dirt. 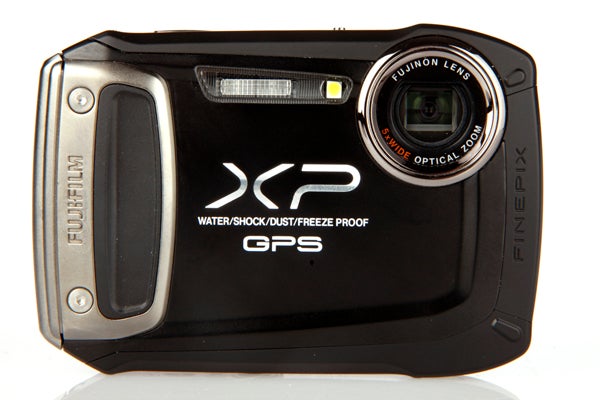 Internally, the XP150 gets a 1/2.3in 14.4MP CMOS sensor and a 5x optical zoom that offers the 35mm focal range equivalent of 28-140mm. There’s also built-in GPS functionality that allows you to geotag your images at source or even to navigate via the electronic compass that can be set to display on the 2.7in, 230k-dot LCD screen. If you’re looking for a camera to take white-water rafting, mountain biking or snowboarding, the XP150 is exactly the kind of camera you should be looking for. Or is it?

About this time last year ago we had a look at the Fujifilm XP30 and while wasn’t a bad camera it wasn’t quite the best in class. Like the XP150 we have here, the XP30 also offered a 14MP sensor, a 5x optical zoom and built-in GPS functionality. While we liked the XP30’s ease-of-use and relatively attractive pricing (now even more so) we did have some issues with image quality, specifically lens sharpness and mid to high ISO performance – something we hoped Fuji might fix with successive XP models. Has the XP150 managed this, or is it just another middle-of-the-field racehorse dressed up in some shiny new livery? 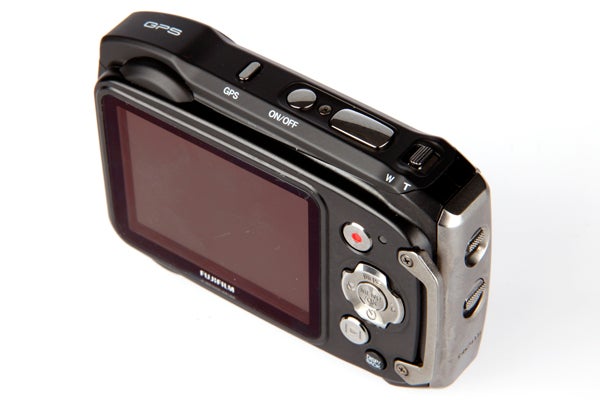 Out of the box, first impressions are actually quite good. The XP150 retains the same basic shape of the XP30 albeit with a couple of subtle design tweaks. The most noticeable of these is the addition of a small metallic plate on the front where your fingers sit, which extends around to the battery/memory card latch. The raised profile of this plate combined with the rubberised finger grip that’s been inset into it gives a little something extra to wrap your fingers around, which in turn results in a slightly more secure hold overall. It’s a shame that the dimpled thumb rest found on the back of the XP30 has been removed though.

Buttons all fall within easy reach and are all quite large and well spaced as well to allow for slightly easier use. There’s no clever Tap Control function though, as seen on the Olympus TG-820 we reviewed last week, so if you can’t operate the camera while wearing thick ski gloves or suchlike you may have to stop what you’re doing and take one off. In terms of button layout the only change over the XP30 is the addition of a dedicated GPS button on the top plate. 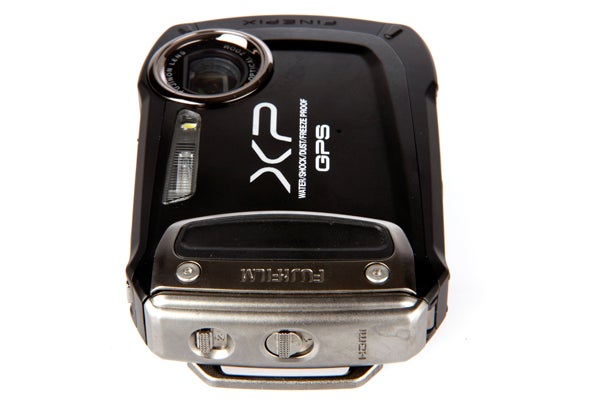 Speaking of GPS, this has been given some added functionality with a new built-in digital compass now able to record which way you were facing as well as the co-ordinates. There are many factors that control how quickly the XP150 can get a lock on passing satellites and in testing we found that it could take as little as 30 seconds or as long as three or four minutes. We were unable to get a single satellite lock while using the camera indoors though, even with the camera propped right up against a (double-glazed) window. Battery performance does take a pretty significant knock when GPS is permanently switched on too, so you may want to consider only turning it on when you need it – or at the very least disabling it when the camera is switched off.

Shooting modes are all of the point-and-shoot variety, although there’s a fairly generous selection of Scene modes to choose from plus a couple of low-light and high dynamic range options that appear to have been ‘borrowed’ from Fuji’s EXR range, both of which rely on the in-camera blending of multiple exposures to improve image quality. Should you want to wrestle back a little bit of control there’s also a Program mode that allows you to choose your own ISO or white balance settings. There are no built-in digital filters although there is an easy-to-use one-touch Panoramic mode. 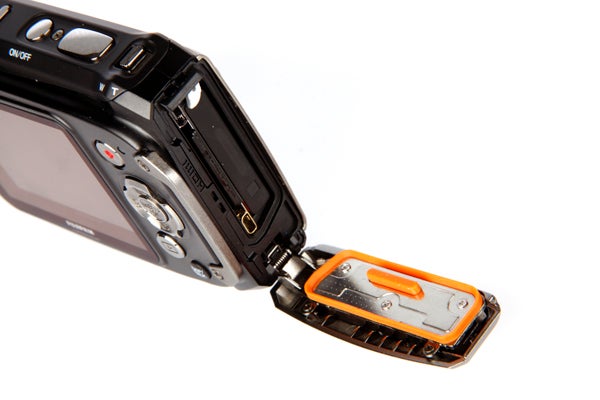 Movie capabilities are catered for with the option to record Full HD movies at 30fps with sound captured in mono. Fallback options include 720/30p HD recording and standard definition 640 x 480. Last but not least are three high-speed options that can capture 640 x 480 at 80fps, or 320 x 240 at either 160fps or 240fps – useful for capturing radical tricks and stunts no doubt.

The Fuji XP150 isn’t the fastest compact out of the blocks, taking around four seconds to fully start-up, after which you can start shooting. While autofocus speed isn’t exactly dazzling, it remains functional in good light and is on a par with other ruggedised cameras – if you’re using it outdoors in good light to shoot stationary subjects with then you’re unlikely to experience any major problems. The AF Tracking function isn’t too bad either – just so long as your subject isn’t moving too fast or erratically. 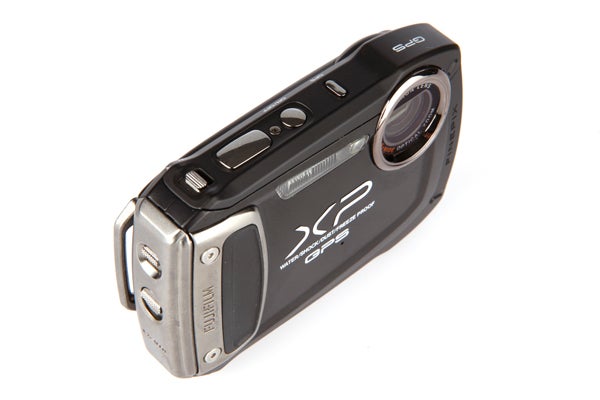 Once light levels drop below optimum, however, the XP150’s AF module soon begins to struggle, which means you can expect to experience some focus hunting, even indoors under anything less than bright artificial light. In addition to the built-on flash there’s also an LED illuminator light on the front that stays on during the recording of still images or video. While it’s not overly powerful it could prove quite useful to illuminate nearby subjects in otherwise murky conditions, or even when the camera is being used underwater in the shade.

Processing times aren’t particularly speedy. While this isn’t likely to be a problem if you’re shooting individual images with the camera set to Single-shot drive mode, if you’re using any of the high-speed Continuous drive modes then you can expect a fairly lengthy processing time after shooting a burst of images. The quality of images shot using the high-speed Continuous drive modes leaves a lot to be desired too, with all images recorded at 3MP and lacking in detail. 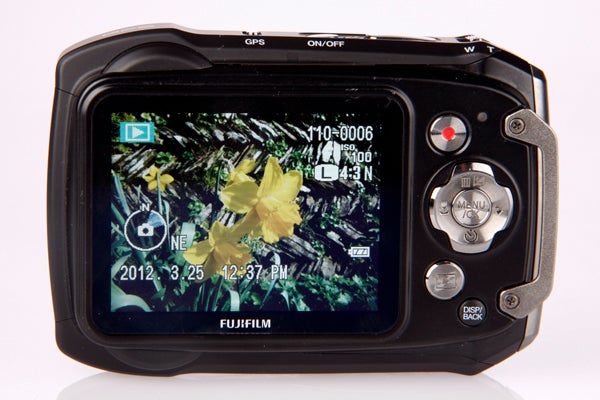 Our biggest bugbear with the XP150, however, is the poor quality LCD monitor on the back of it. With a resolution of just 230k-dots the XP150’s 2.7in screen is firmly in budget compact territory. This would be fine if the XP150 was priced as such, but at around £200 we’d expect to see something a bit better.

By way of contrast, the Olympus TG-820 (c.£230) we reviewed earlier in the week offers a 1.03m-dot 3in screen. The difference between the two cameras when held side by side is really very noticeable – whereas the TG-820’s display is sharp and precise the XP150’s looks blurred and mushy. On the plus side the XP150’s screen is treated to an anti-reflective coating for better visibility in direct sunlight and underwater, however the actual image it displays just isn’t very good.

One further problem is how easily the screen scratches. For a supposedly ‘tough’ camera, it’s ridiculously easy to mark. We managed to do so just by placing it gently on some rocks while shooting the underwater river shots on the Sample Images page.

Image quality is best described as a bit hit and miss. The evidence suggests that the XP150’s 14.4MP sensor is somewhat overpopulated and as
result suffers in low-light and at higher ISOs. We noted exactly the same flaw in our review of the 14MP XP30 last year, which in turn suggests that Fuji would probably be better off reducing effective resolution down to around 10-12MP and focusing on providing a cleaner image at a smaller size rather than just cramming the extra pixels in.

At its lowest sensitivity settings of ISO 100 and 200 image quality isn’t all that bad. However once you’re forced to raise the ISO image quality does go downhill fairly rapidly. As low as ISO 400 and detail starts to visibly soften. By ISO 800 this trait has become even more pronounced with a loss of saturation too – a trend that only accelerates as you hit the top settings of ISO 1600 and 3200 with the latter being all but unusable.

We were also somewhat disappointed to find that the XP150 lacks Fuji’s regular range of Film Simulation types (Provia, Velvia and Astia), instead just getting a Standard colour mode, a slightly muted ‘Chrome’ effect, along with B&W and Sepia options. Image sharpness, so often a bugbear of compacts that use a folded-lens design such as found in the XP150, isn’t too bad on the whole. Images are certainly sharper in the centre than at the corners and edges but this is a trait the XP150 shares with most compacts. 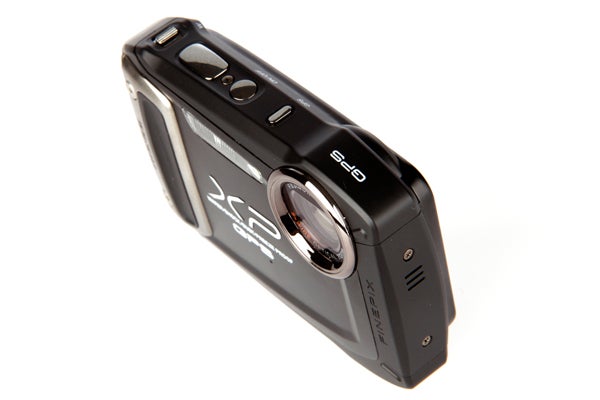 We found that when left to its own devices in Scene Recognition the XP150 tends to produce quite vibrant images although greens and blues can sometimes look a little over-saturated and unnatural. Tonality can be a little flat too, lacking the subtle gradations better cameras would be able to capture. We also found that many images were slightly underexposed – generally by no more than around one-third of a stop, but still enough to keep highlights muted.

Verdict
The Fujifilm XP150 is a waterproof, shockproof, freeze-proof and dust-proof compact digital camera that’s as at home underwater as it is in the snow. Aside from the ruggedised and GPS aspects – all of which could certainly prove useful in the right circumstances – the XP150 is very much a middle-of-the-road compact that doesn’t really stand out from its peers, either in terms of performance or image quality. It’s certainly competent and given the right conditions can produce a pleasing image too, however the low-resolution and far-too-easy-to-scratch LCD screen really let it down. For that reason it just about scrapes a respectable 7 out of 10, but no more. 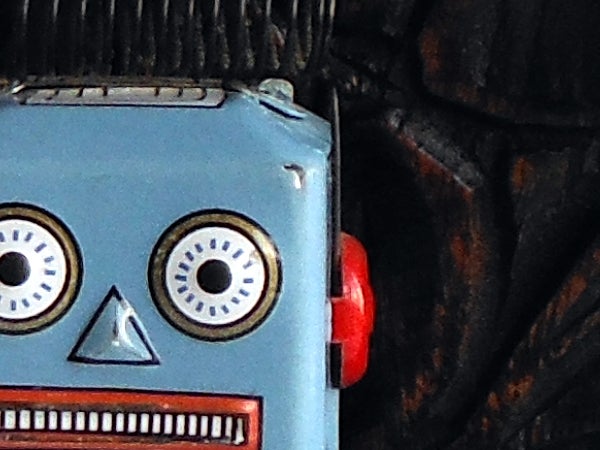 Images shot at ISO 100 are clean and free of noise. 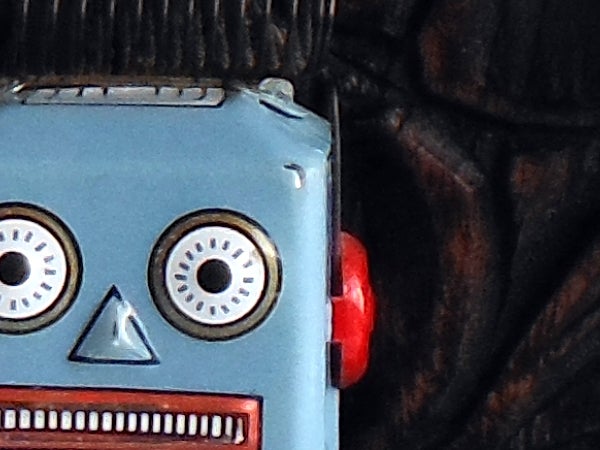 At ISO 200 there’s the merest hint of softening, but it’s nothing to worry about. 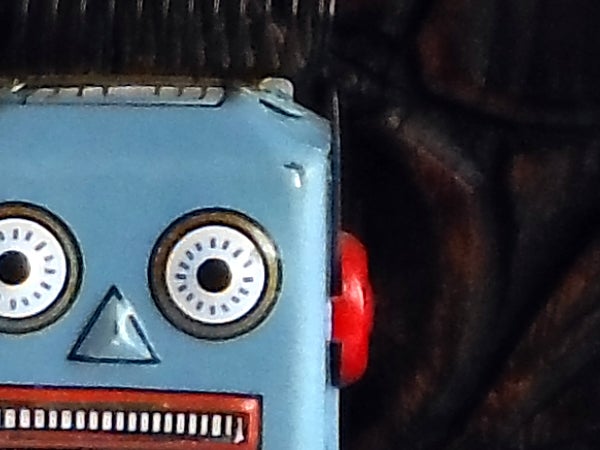 By ISO 400 the softening has become much more noticeable. 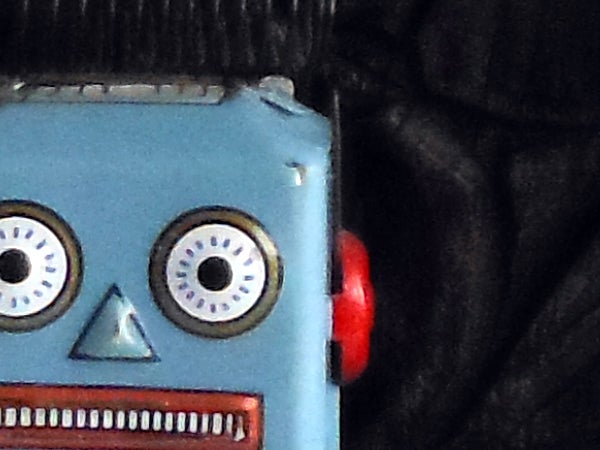 By ISO 800 image quality has really started to unravel, with shadow areas reduced to a near blur. 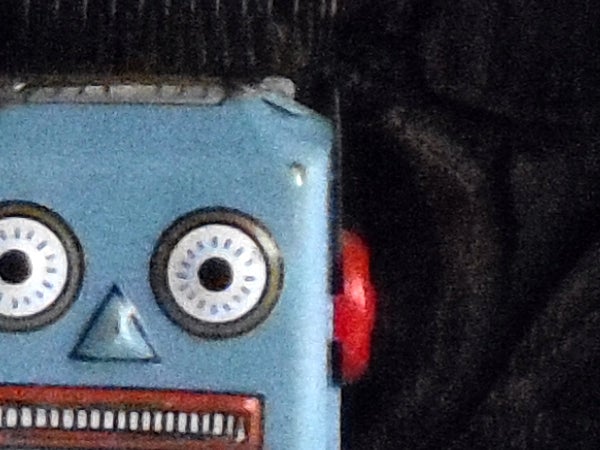 Image quality at ISO 1600 really isn’t all that great. 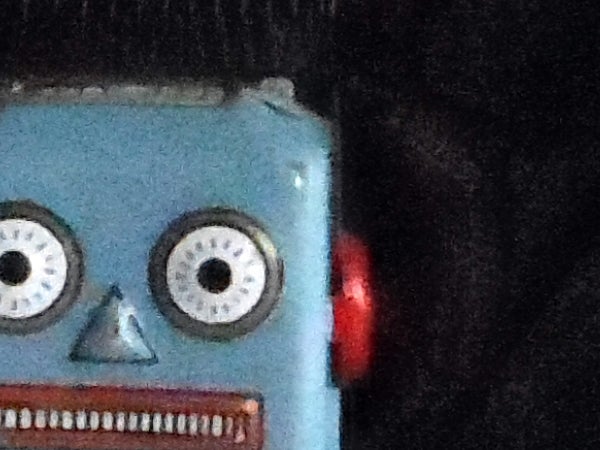 While ISO 3200 is best avoided at all costs. 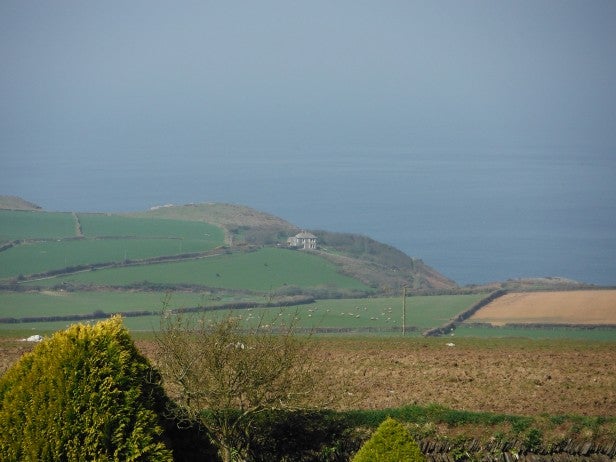 Overall image quality is best summed up as being OK but not particularly outstanding. 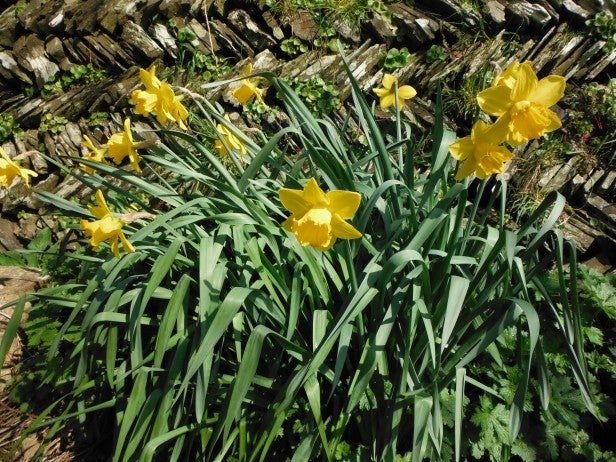 We did find that greens can look a little oversaturated and unlifelike. 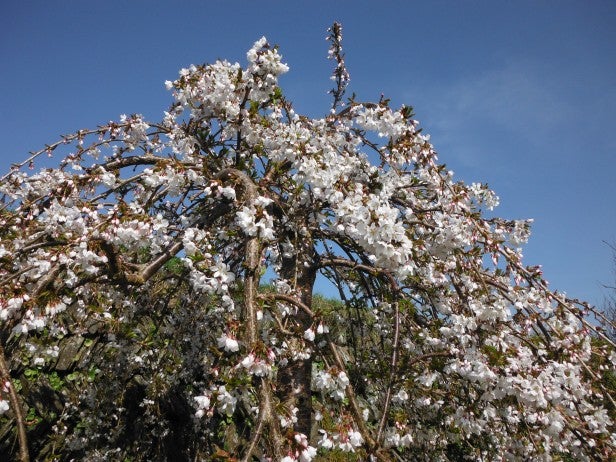 Blue skies also lack the subtle variations in tonality that better cameras would be able to capture. Image sharpness isn’t too bad though – especially given the XP150’s folded-lens design. 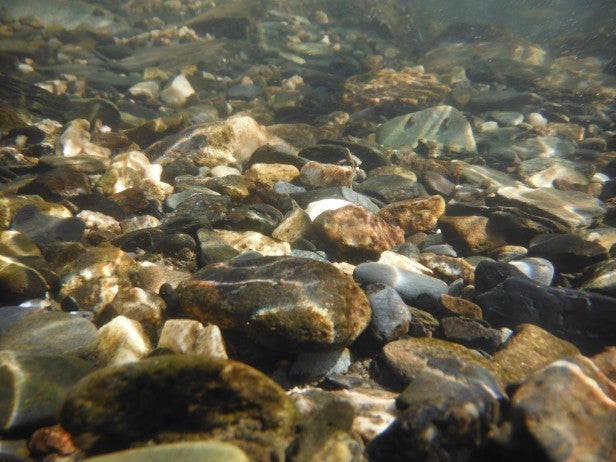 It’s possible to use the XP150 underwater up to a depth of 10 metres.