It was with the original X100 that Fujifilm launched itself back into the serious photography world, after many years languishing in the doldrums of cheap compact cameras and bridge models. With the X100, it got back to what it had built its heritage on.

We’re now five generations on (V taking the place of the roman numeral for five) and Fujifilm has taken all it has learned in the past decade to create what should be, on paper at least, the perfect street camera.

Fujifilm has stuck with a combination of APS-C sensor and 23mm (equivalent to 35mm) throughout its X series range. Over the years, tweaks and revamps have evolved the camera slowly, but steadily, so what we have now isn’t a huge departure from that original model, but rather a refinement.

Let’s discover what makes it so appealing… 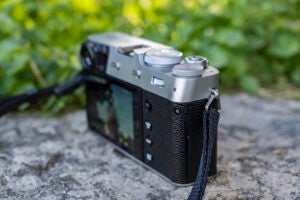 Design – The classic just gets better…

From the outside, it’s hard to spot the difference between the newest X100 model and those that have come before it. Most of the changes have been made to the internals – a sensible choice considering just how much of a classic design the X100 series has always used.

What we do have new here is the addition of tilting touch-sensitive screen. Personally, I’ve always thought that pretty much the only thing stopping previous X100 models from quite reaching perfection is the fact that it didn’t have an adjustable screen. The X100V answers that criticism with aplomb, giving the street shooter the option to shoot from the hip or awkward angles without giving too much away. 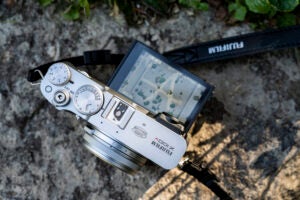 There’s a “hybrid” viewfinder on offer here. You can use either an optic or electronic finder depending on your preference – or perhaps depending on the subject you’re shooting. You can switch between the two by using a lever on the front of the camera – the optical finder is particularly useful for spotting subjects about to walk into (or out. of) the frame.

Although the idea of having a hybrid viewfinder isn’t new for the X100V, it has been improved. The optical finder now offers greater (95%) coverage, while the electronic device has a huge 3.6-million dot resolution. Both are a pleasure to use and it really does come down to what you prefer at the time of each shot.

The button layout of the X100V also sees a few changes when compared to its predecessor. There’s no longer a four-way navigation pad, while the Q button – which leads to a quick menu – has been moved to sit to the right of the thumb rest. These are fairly slight changes that don’t take too much getting used to if you’re moving from an older model, and make more sense to those who are new to the line-up. 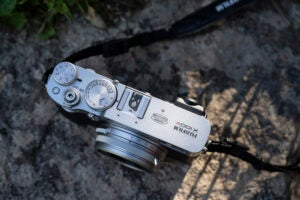 On the top plate, you’ve got all the dials and controls that have made the X100 cameras appealing to enthusiasts. There’s an ISO dial plus an exposure compensation dial, while aperture can be adjusted via a ring around the lens itself. Dials to the front and rear of the camera are used for shutter speed or other functions, and can also be depressed inwards to access user-defined settings.

Another new addition is weather-resistance, something which has to-date otherwise been missing from the X100 series. This is great news for those who like to street shoot in a variety of weather conditions, and only adds to the premium feel of the camera.

The X100V has a tried and tested sensor that we’ve seen in other Fujifilm models, including the X-T4, X-T3, X-Pro3 and the X-T30. While the lens is the same focal length, it has a new design which lends itself well to capturing even sharper images than before.

Overall, images are beautiful, and have a certain “quality” that we’ve come to expect from Fujifilm. The colours are lovely, with pleasing out of focus areas when shooting at a wide aperture. 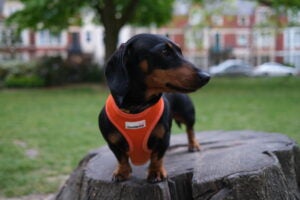 Noise is well-controlled throughout the native ISO range, with images shot even at the upper levels like ISO 6400 producing pleasing results.

One of our favourite things about Fujifilm cameras is the “film simulation” modes which can be used to recreate the look of classic film stock. Although these have been around for a long time, every so often, Fujifilm adds a new one into the mix. For the X100V, we have Classic Negative, which has an old fashioned type of look and should give your shots a timeless feel. 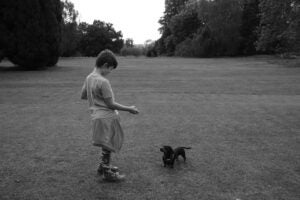 There’s also been improvements to other areas too, including AF acquisition speed, which is especially evident when shooting in dimmer conditions. It also has face and eye detection, which comes in handy when shooting street-type portraits.

Connections and Battery – Charge on the go for best results

The official battery rating of the Fujifilm X100V is 350 shots, with it being likely that you’d get more from it than that in real-world scenarios.

Either way, it should generally last a whole day of normal stills use. If you shoot 4K, or spend a lot of time transferring pictures to your smartphone, then it’s likely you’ll see the battery level drop. In which case, being able to charge via USB with a portable battery pack is a good idea – it might also be worth investing in a second battery for those who like to spend a day pounding the pavements in search of the perfect street shot. 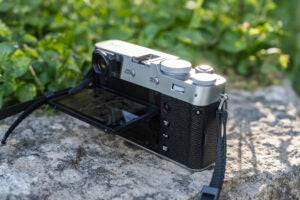 As well as the USB-C connector for charging the camera, other connections include an HDMI micro connector, plus a microphone input, which might appeal to videographers and vloggers – though it’s unlikely to be a camera which is particularly high on the shopping list of that type of user.

The camera also has Wi-Fi and Bluetooth connectivity for transferring your shots to your smartphone, which can be done quickly and reliably using the free app available for Android and iOS.

Should you buy the Fujifilm X100V?

Whether or not you need a camera like the Fujifilm X100V is almost an irrelevant question. It’s not a camera you need, but rather a camera you want.

Over the years, Fujifilm has built up quite a following for this camera. The X100V brings together all of the company’s nous over the past decade to produce a refined camera that is not far off being perfect.

If you’re into street photography, or just want a high-performing compact camera, then it’s almost definitely worth looking at, since it matches that criteria extremely well.

The price of perfection isn’t cheap though. For a camera that doesn’t give you the flexibility of being able to change the lens, or zoom in and out, then you do pay quite a high price – whether you think it’s worth it will be entirely down to personal preference.

In short, the X100V is a very desirable camera, with very little to dislike about it.