The superb image quality offered by a medium-format model often comes at a cost – and not just a monetary one. While the GFX100S remains expensive, it’s smaller, lighter and easier to use than most cameras of its type, and on the price front it’s over £4000/$4000 cheaper than Fujifilm’s only other 102-megapixel camera. Enthusiasts and professionals may be the target market, but this is a camera anyone can use – provided they can afford it.

The Fujifilm GFX100S is the company’s fourth digital medium-format body and its second to come with a 102-megapixel sensor.

Traditionally, digital medium-format cameras have been the preserve of the professional, or at the very least the well-heeled ultra-enthusiastic amateur.

It isn’t just their expense that’s been the problem; they’ve generally been more demanding to operate, too, lacking many of the user-friendly features we’ve come to expect on the best cameras. Sluggish, inaccurate autofocus, no image stabilisation and underwhelming video performance (or no video recording at all) have frequently been the trade-offs for all the extra detail and colour depth you get with such models.

That’s not the case with the Fujifilm GFX100S, the company’s fourth digital medium-format body and its second to come with a 102-megapixel sensor.

The Fujifilm GFX100S weighs just 900g without a lens, making it a full 500g lighter than the GFX100. The body itself is trimmer, too, thanks to the removal of the GFX100’s built-in vertical battery grip.

While this means the GFX100S can only hold just one battery at a time (to the GFX100’s two), and isn’t as comfortable to hold in portrait orientation, the major size and weight reduction – it’s a full 30% smaller by volume – makes it much easier to use on the move. Both with and without the included neck strap, I have carried the camera for photo walks of several miles without feeling like my wrist ever needed a rest. 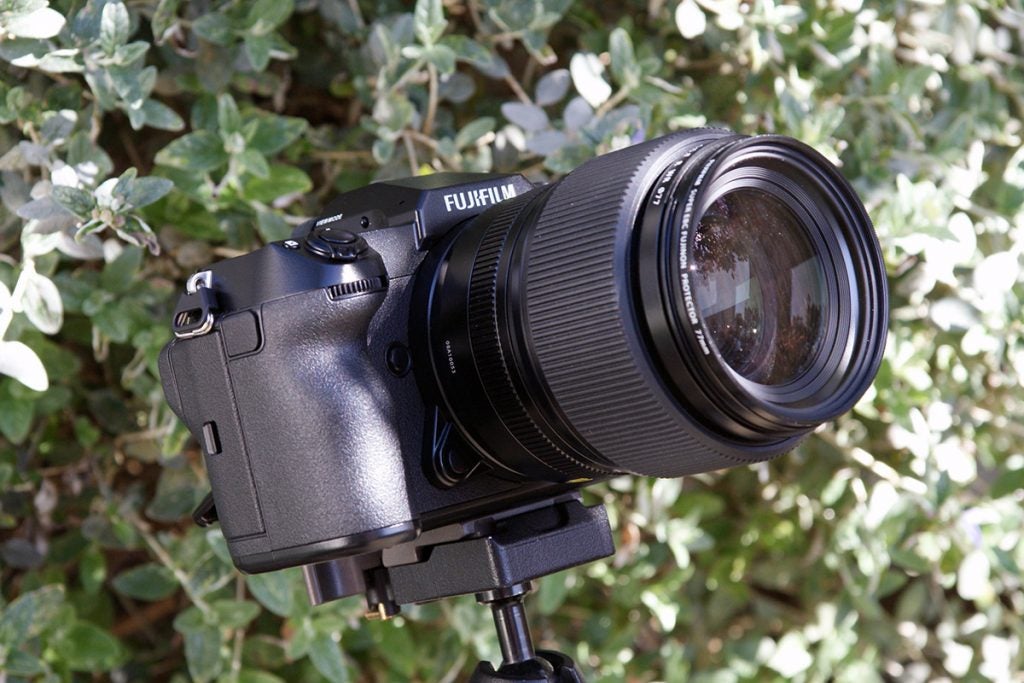 That’s not to say this is a small camera. By mirrorless standards, it’s large – bulkier even than Sony’s full-frame E-mount models and much heftier than anything in Fujifilm’s own APS-C X-series range. It’s worth noting that Fujifilm’s G-mount lenses, which are the only lenses fully compatible with this camera, are all big and heavy too.

Still, it does feel like an achievement that Fujifilm has squeezed a 102-megapixel medium-format sensor and in-body image stabilisation into a camera of this size.

Handling-wise, the traditional DSLR-style shape makes this a pleasingly chunky camera to hold. The huge, rubber-clad grip for the user’s right hand comes with a prominent thumb-nub, which means you can get a firm hold on the unit even one-handed, while the button and dial placement feels beyond reproach.

Interestingly, Fuji has foregone its traditional shutter speed, exposure compensation and ISO dials for a standard mode dial with Shutter, Aperture, Program and Manual priority options – an apparent attempt to appeal to photographers more accustomed to other manufacturers’ cameras. There are six customisable settings on the same dial, while a sliding selector just in front toggles between stills and video shooting. 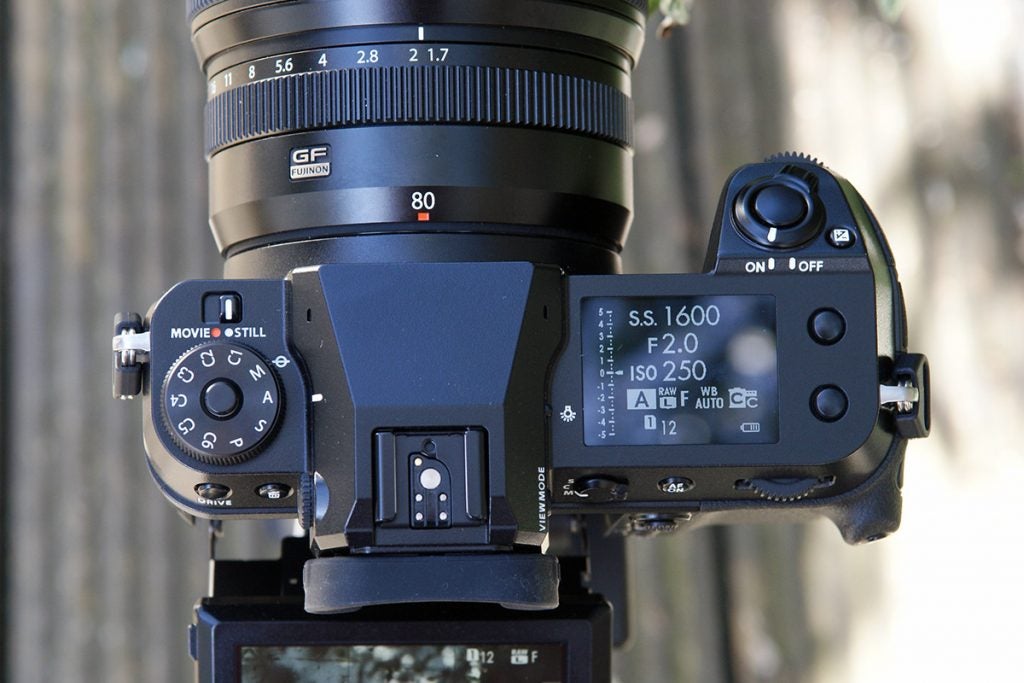 Adjustment dials for the forefinger and thumb plus dedicated drive, autofocus, exposure compensation shortcut buttons, and a Q button for the bulk of the other settings, make changing shooting criteria super-easy and quick. Helpfully, an always-on LCD panel on the top plate gives the user an at-a-glance rundown of all the main current settings.

Finally, as you’d expect from a camera pitched at professionals, the GFX100S is rugged and weatherproof, with seals to keep dust and moisture out of the vital innards.

A 3.2-inch rear touchscreen gives users another way to control the camera, although I found touch focus (you tap a point on the screen to set the autofocus area) the only really compelling reason to veer away from the physical controls.

As a display, the screen does its job well: it’s fairly bright, detailed and can be tilted upwards (about 90 degrees), downwards (about 45 degrees) and to the right (again, about 45 degrees) to make it easier to see. It’s particularly useful when holding the camera above or below your head, or when it’s mounted on a tripod. 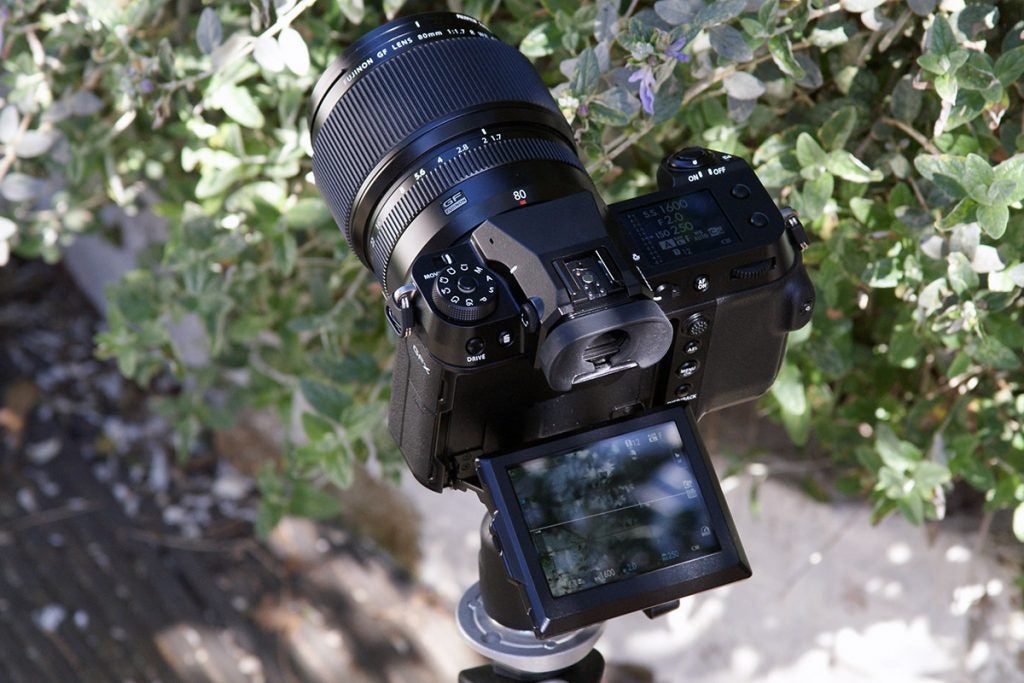 The electronic viewfinder is OLED-based and pretty great, although it’s worth noting that it’s less detailed than the removable viewfinder on the GFX100.

Still, I found it large and more than sharp enough for shot composition and a godsend on a sunny day when glare makes the screen trickier to see.

The GFX100S may only be able to carry one battery at a time, but it’s good for more than 450 shots, or around an hour of 4K video recording per charge – which seems more than acceptable. Charging is performed internally via the camera’s USB-C port, and can be achieved via a supplied AC adapter or from a computer.

Other connections include a 3.5mm headphone jack, a 3.5mm external mic input, a 2.5mm remote shutter-release port and a micro-HDMI output. There are also two SD card slots, so storage shouldn’t be too much of an issue, regardless of the huge file sizes that result from that 102-megapixel sensor.

Yes, that sensor resolves a lot of detail, turning out massive images that can be severely cropped while remaining clean and sharp-looking. I took the below sample shots using Fujifilm’s newest G-mount lens, an 80mm F1.7 prime, and found it a joy to use. It’s a large and heavy lens for a prime, perhaps, but sharp through most of its range, and quick and quiet when it comes to autofocus. 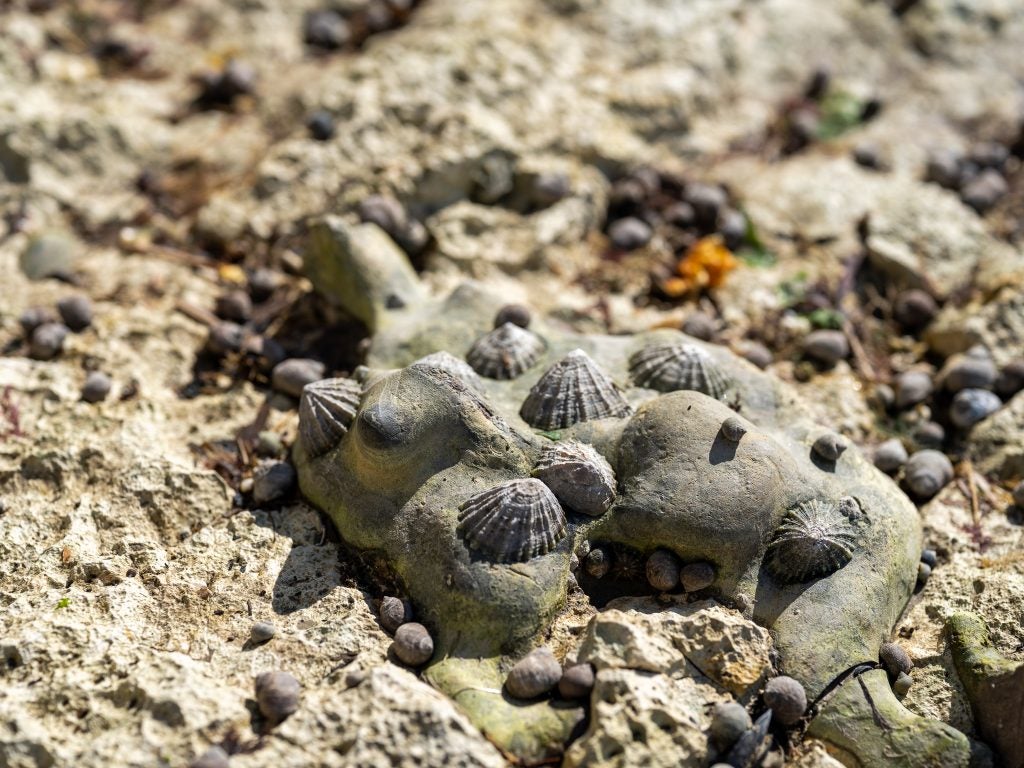 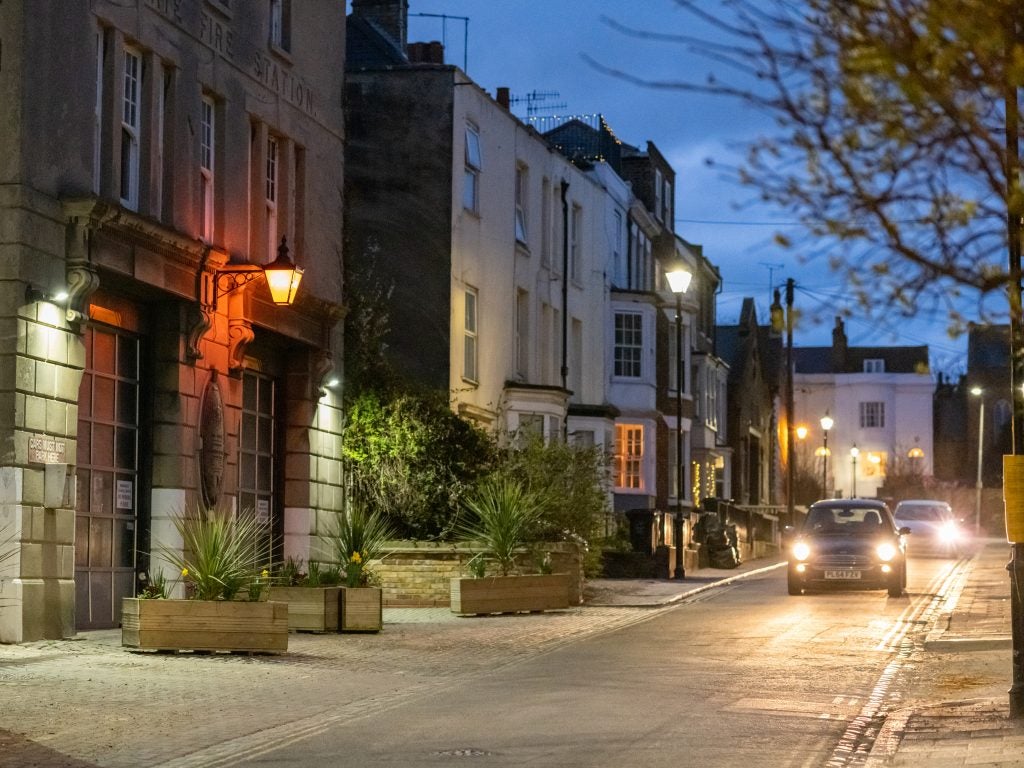 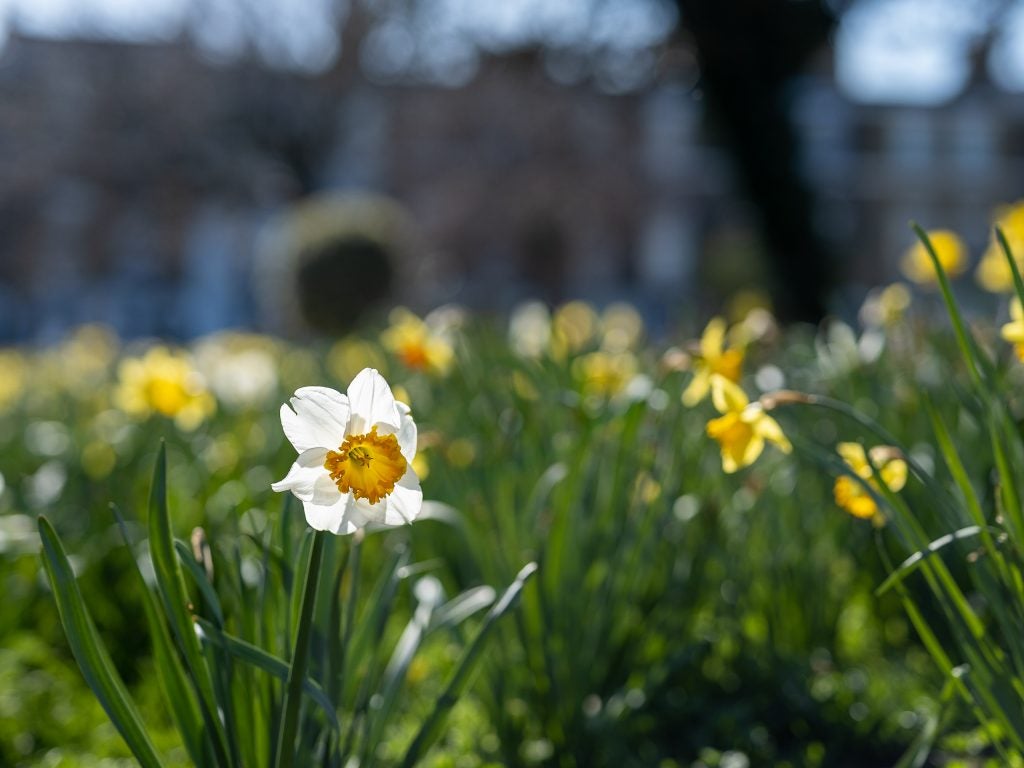 It’s a little slower, I suspect, but still fast and accurate enough to capture on-the-move subjects, with effective tracking and face/eye detection helping you to nail snapshots time and again. Coupled with the camera’s portability and the built-in image stabilisation (which Fujifilm says adds about 6 stops of compensation to the camera), it turns the GFX100S into almost a point-and-shoot medium-format – which feels faintly ludicrous and utterly brilliant. Of course, if you want the absolute crispest, crunchiest detail, you can still mount the camera on a – but it works really well handheld.

All the images here were taken as RAW files and processed in Adobe Lightroom afterwards, but Fujifilm includes 19 of its famous Film Simulation modes in the GFX100S for users who prefer the immediacy of in-camera JPEGs. Presets that essentially ape the look of classic analogue film types, these can give some beautiful and eye-catching results. There’s even a brand-new one among them in the form of Nostalgic Negative.

The GFX100S is a strong video performer as well, with the ability to record 4K videos at up to 30fps and 1080p videos at up to 60fps, and record in Hybrid Log Gamma and Flog colour profiles for more colour-grading scope in post-processing. The image stabilisation and autofocus tracking will work while recording video, and clips length can run as long as 120 minutes – twice the length offered by the GFX100.

All in all, video recording is a surprisingly painless experience on this camera and yields some great-looking results.

If you’re someone who needs the detail, colour depth and depth-of-field that only a medium-format camera can muster, the GFX100S deserves a spot on your list.

It’s packed with features that make it easy to use, it’s relatively compact and lightweight, its controls are well laid-out, its battery life is solid and it produces stunning 102-megapixel images and lovely videos.

You should buy the Fujifilm GFX100S if…

This is one of the easiest medium-format cameras to live with, all without compromising its image quality.

You shouldn’t buy the Fujifilm GFX1000S if…

With G-mount lens prices starting at £949, you’re looking at shelling out at least £6450 as a first-time buyer. For the same sum, you could buy a 61-megapixel Sony A7R IV full-frame camera (which is less bulky and offers faster autofocus than the GFX100S) and have almost £3000 left to spend on lenses and accessories. For most people, 61 megapixels is more than enough.