Having reviewed Fujifilm’s latest EXR-sensor compact the FinePix Z700 earlier this week, I thought I’d take a look at it’s little brother the FinePix Z70 today. While the Z700 is stuffed with the latest technology, including its advanced sensor, image stabilisation and a big high-resolution touch-screen monitor, the Z70 is a much more modest affair, although it does share a few features with its higher-spec sibling. It too is a sliding-front ultra-compact featuring a 5x zoom lens, but it has a normal 12-megapixel CCD sensor, a 2.7-inch 4:3 ratio monitor with 230k dot resolution, and has only digital image stabilisation. 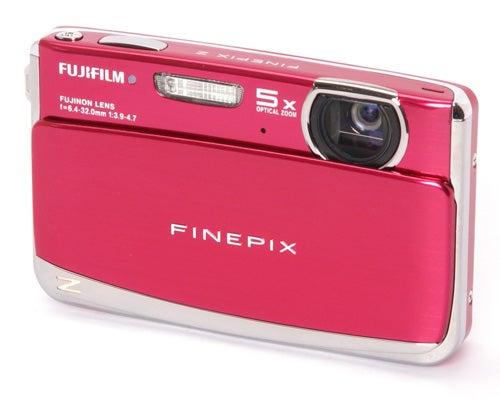 The Z70 is a budget-priced camera, currently selling for less than £80 from most retailers. It is unashamedly designed to appeal to the younger generation, as its extremely noisy and “in your face” page on Fuji’s website will attest. It is quite well put together for a cheap camera though, with a sleek and well finished aluminium body. It’s a very compact and lightweight camera ideal for slipping into a pocket or handbag for a night out, measuring 91 x 57.1 x 20.1mm and weighing only 145g including battery and card. It is available in a wide range of colours, including black, silver, metallic blue, metallic purple and the bright metallic pink seen here. 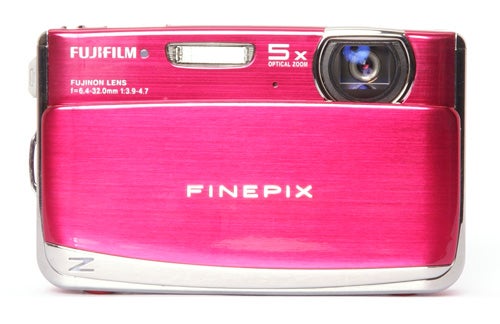 The Z70 is designed to be a blogging tool for those who live their lives online, and has a dedicated button that tags images and video clips for upload to Facebook or YouTube. The included My FinePix Studio software will automatically upload any tagged picture to the appropriate site as soon as the camera or memory card is connected to a computer. It’s kind of a handy feature I guess, although uploading files to either site isn’t exactly difficult to begin with.

The rear controls of the Z70 are all mounted in a panel on the right hand side. They are obviously designed as much for their appearance as their function, but I’ve seen a lot worse. Because they’re all in a single panel they’re difficult to locate by touch, but they do light up which makes them a bit easier to find in the dark. They have a decent travel and operate with a nice positive click, and are clearly labelled. The rocker switch for the zoom control is a bit fiddly, but at least there is a textured thumbgrip area just below it. On the top panel of the camera is a dedicated button to instantly start video recording, so you’re not going to miss any embarrassing skateboarding accidents.


The camera’s other external features are unfortunately less useful. The monitor is not terribly bright, has a reflective surface and a fairly poor viewing angle, making it difficult to see in bright sunlight and impossible to see when raised above head height. It also has a slow refresh rate and a slight delay. The built-in flash too is a bit on the weak side, barely meeting its claimed 3.1m range at wide angle, and leaving the corners of the frame noticeably dimmer than the middle.


The Z70 has only a basic range of features, but does offer HD video recording at 1280 x 720 resolution and 30 frames a second with mono audio. The video and audio quality are actually quite good, and surprisingly it does include full optical zoom while recording, although the zoom motor can be heard on the soundtrack, and the autofocus does take a couple of seconds to re-adjust after zooming. 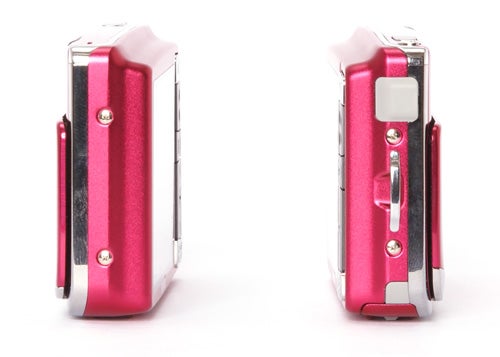 Other features include face detection and tracking autofocus, although neither are particularly effective. Shooting modes include Program auto, Fuji’s usual natural Light and Natural Light with Flash modes, 12 scene programs and a Scene Recognition Auto mode. It also has a Successive Movie mode, which allows you to join a series of clips into a single movie. There are also some limited movie editing functions in playback mode.

The Z70’s overall performance has good points and bad. It takes approximately four seconds to start up and be ready to take a picture, which is a bit on the slow side, but the shot-to-shot time of approximately two seconds is isn’t too embarrassing. It doesn’t have a continuous shooting mode as such, but it does offer a three-shot burst mode shooting one frame a second.

Unfortunately the autofocus system is painfully slow, taking over a second to focus even in decent light, and also not terribly reliable. It often fails to focus unless there is a lot of high-contrast detail in the focus area, in situations where most other cameras would have no problem. It is even slower and more unreliable in low light, and frequently fails completely once the light drops to the sort of levels often found in pubs and clubs, surely a major problem for a camera aimed at a younger demographic. It has no AF assist lamp, so it’s virtually useless in very low light.


Fortunately the overall image quality is quite good, although even here it does have a couple of problems. Exposure is generally accurate and reliable, and colour rendition is bright and well saturated. Dynamic range is very poor, with almost no shadow detail on my usual test shot, and the Z70 has no contrast-boosting feature. The overall level of detail is good, and the compression in fine mode is low enough to preserve most of it, but the lens does suffer from pronounced barrel distortion at wide angle, as well as visible chromatic aberration at the edges of the frame. 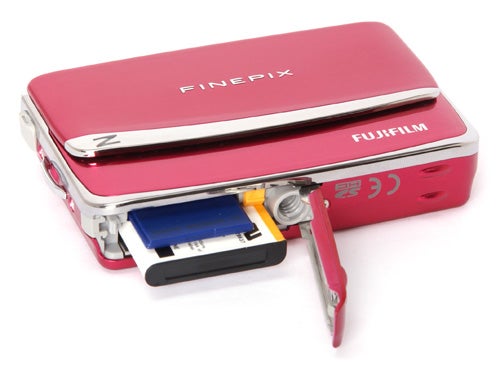 Noise control on the other hand is better than average, with good picture quality at 400 ISO and light grain-like noise at 800 ISO. The maximum 1600 ISO is not so good, but I’ve seen a lot worse from ore expensive cameras.

Considering its low price the Fujifilm FinePix Z70 offers good build quality, ease of use and plenty of style, along with acceptable picture and video quality and some useful and unusual features for online photo and movie sharing. Performance is adequate, although the poor low light focusing is a handicap. If you’re looking for a fashion camera on a budget you could do a lot worse. 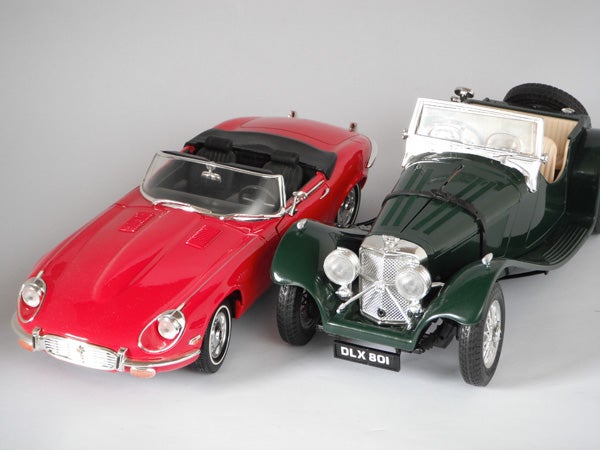 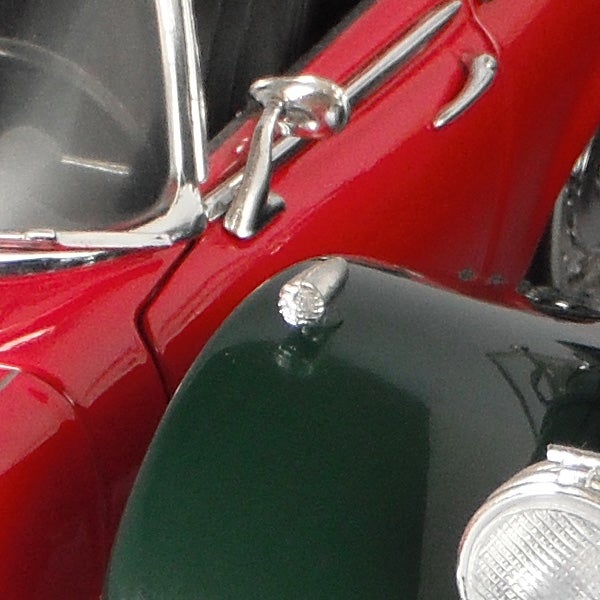 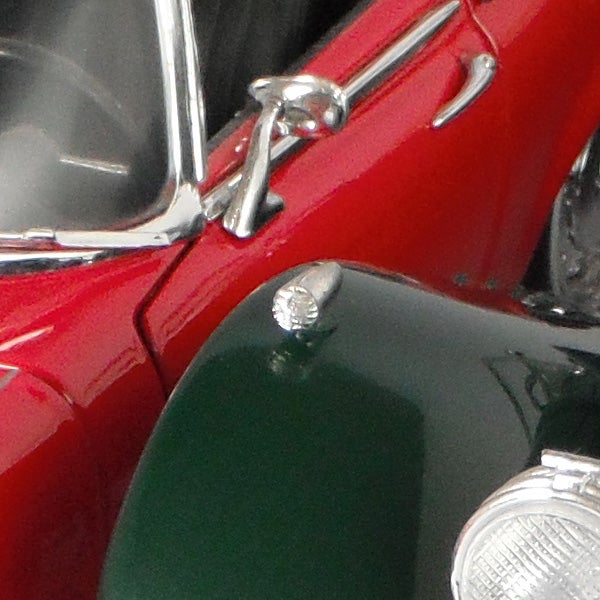 Some slight colour mottling at 200 ISO, but nothing serious. 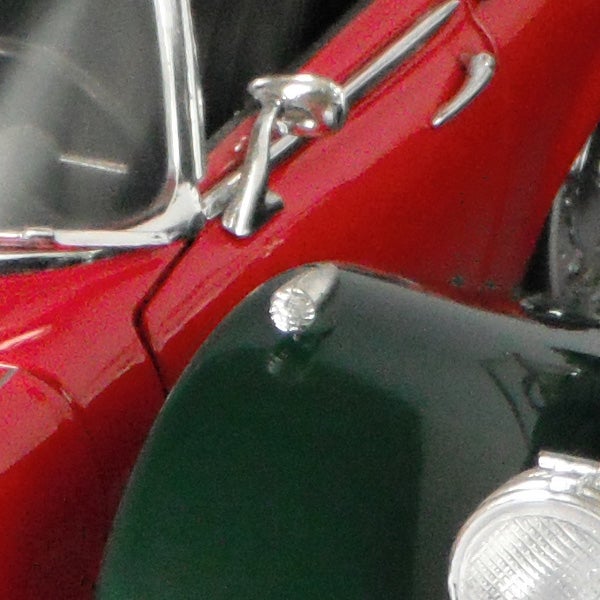 Still no major problems at 400 ISO. 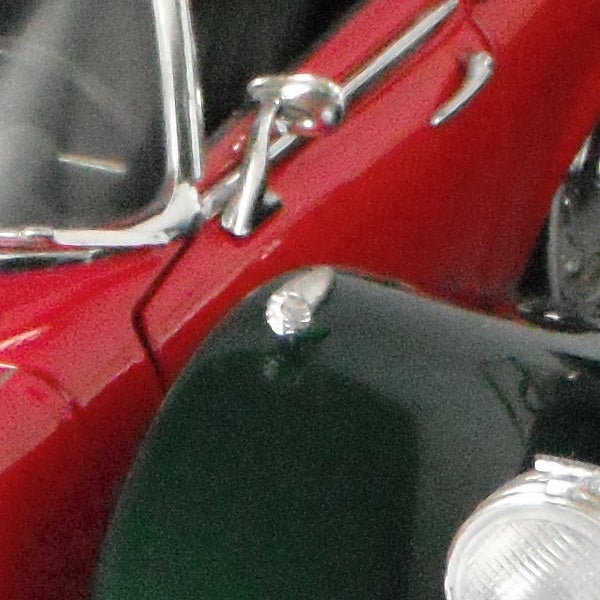 There’s a lot more noise at 800 ISO, but the colour is still good. 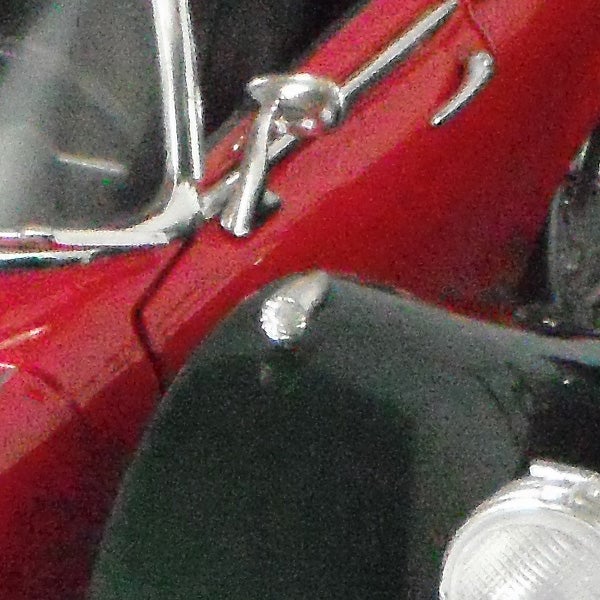 1600 ISO is very noisy, and colour has broken down in some areas. 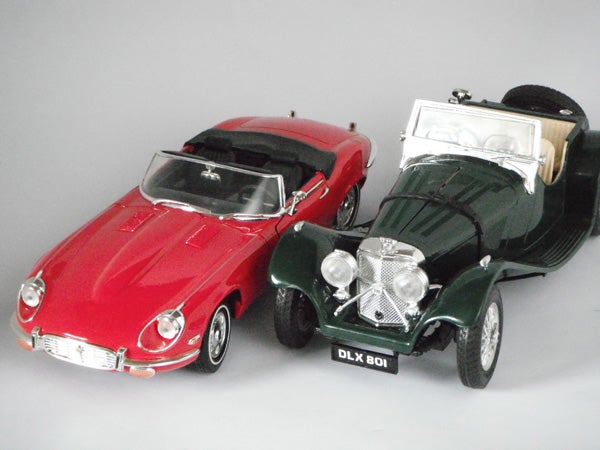 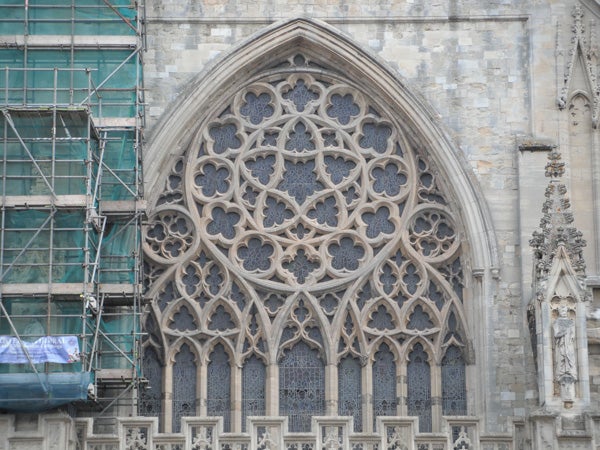 Here’s the usual detail test shot of the West Window of Exeter Cathedral, for you to compare with other cameras. See below for a full res crop, or click to see the whole picture. File size 5.9MB. 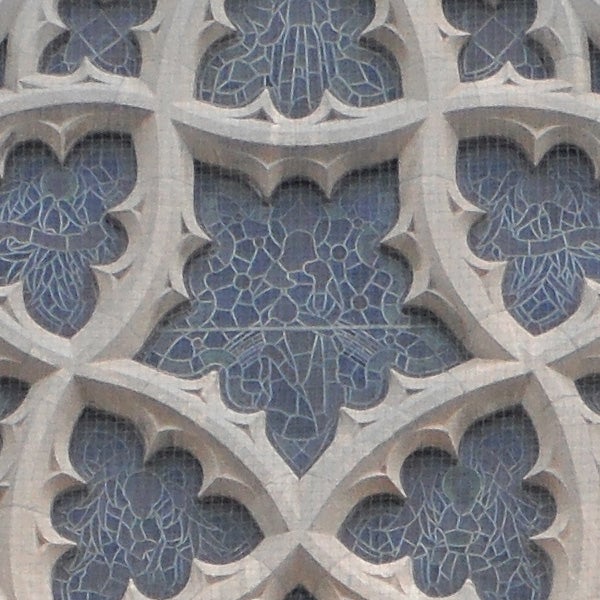 The level of fine detail is very good, and the low compression helps preserve quality. 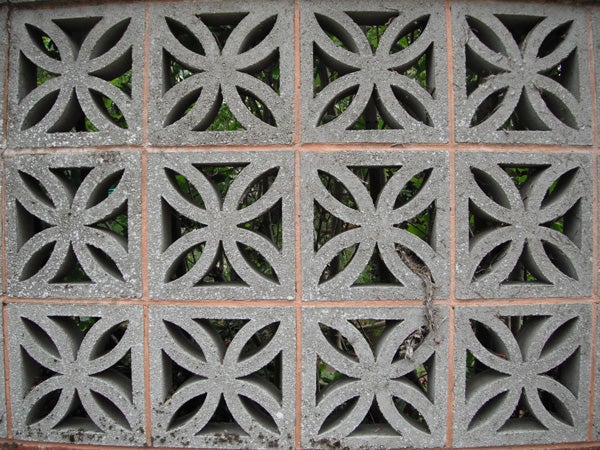 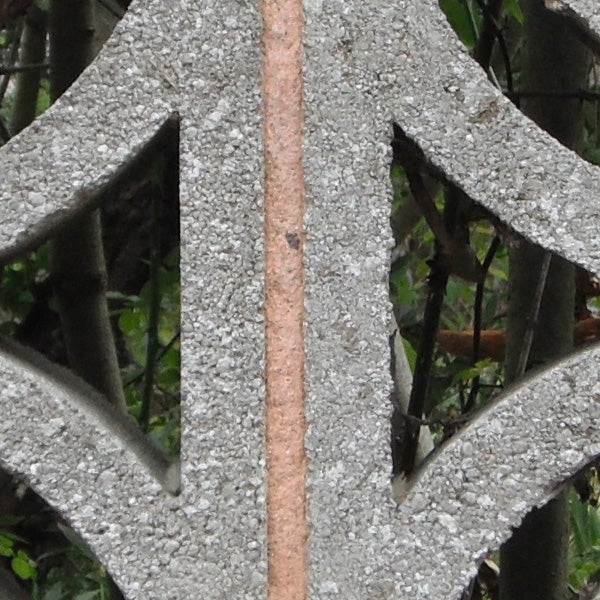 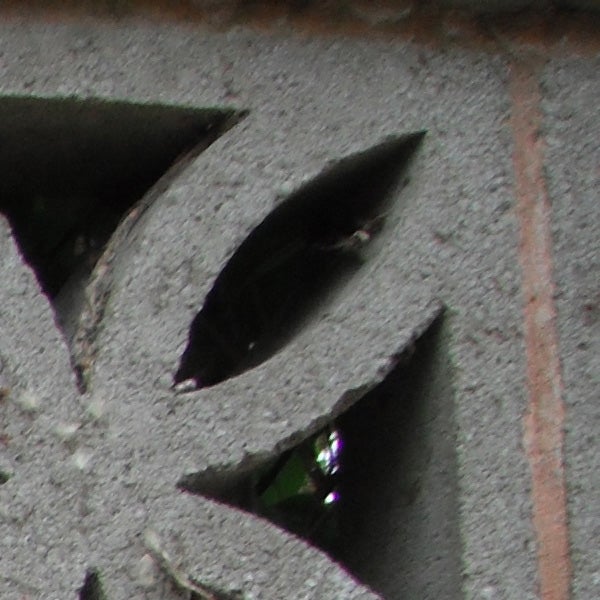 There is some blurring at the corners, and a bit of chromatic aberration. 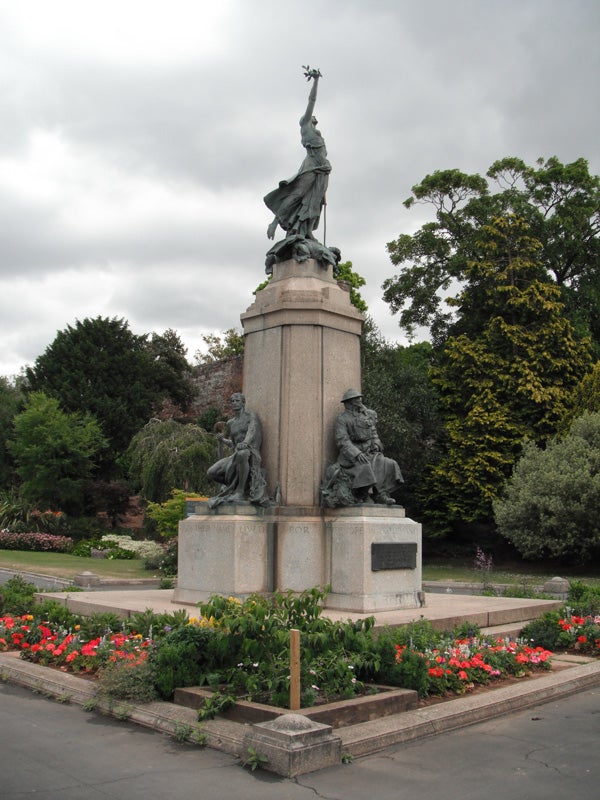 The wide angle end of the zoom is equivalent to 36mm. 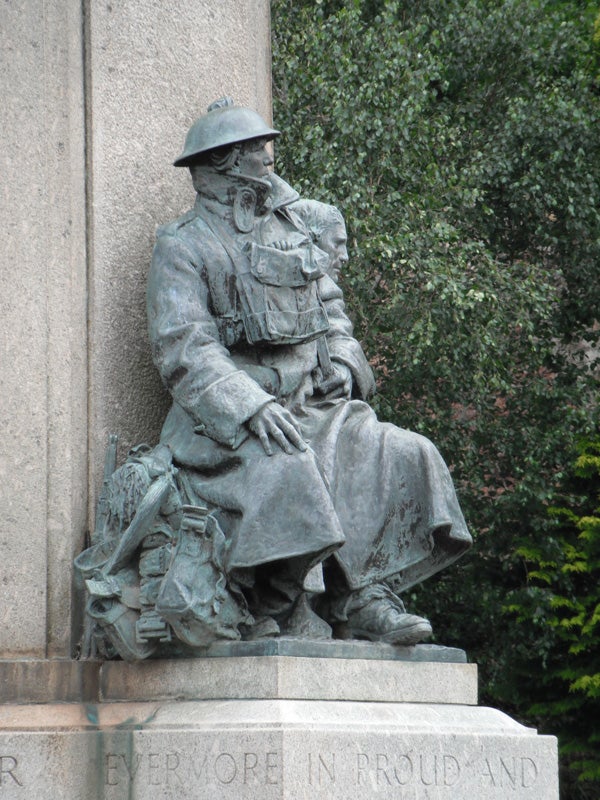 The telephoto end is equivalent to 180mm. 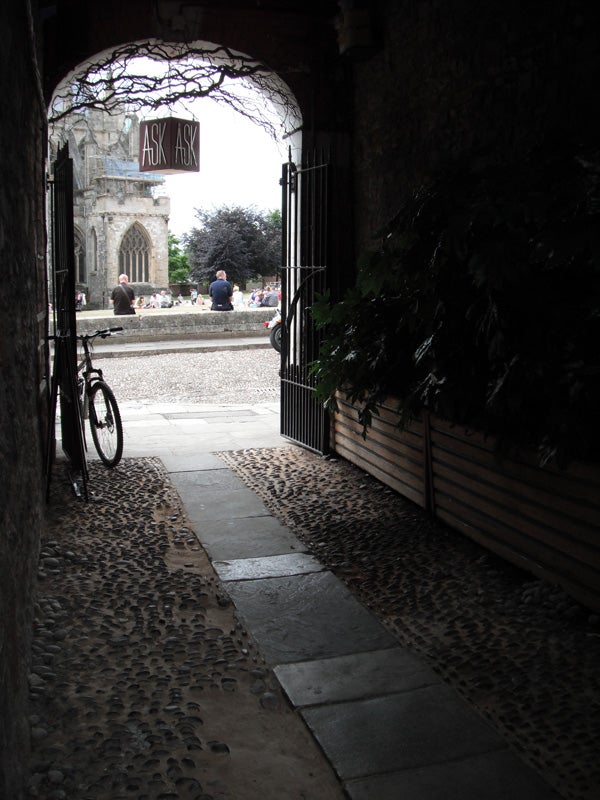 The exposure meter has selected for the highlights here, but even so dynamic range is pretty awful, with little shadow detail. 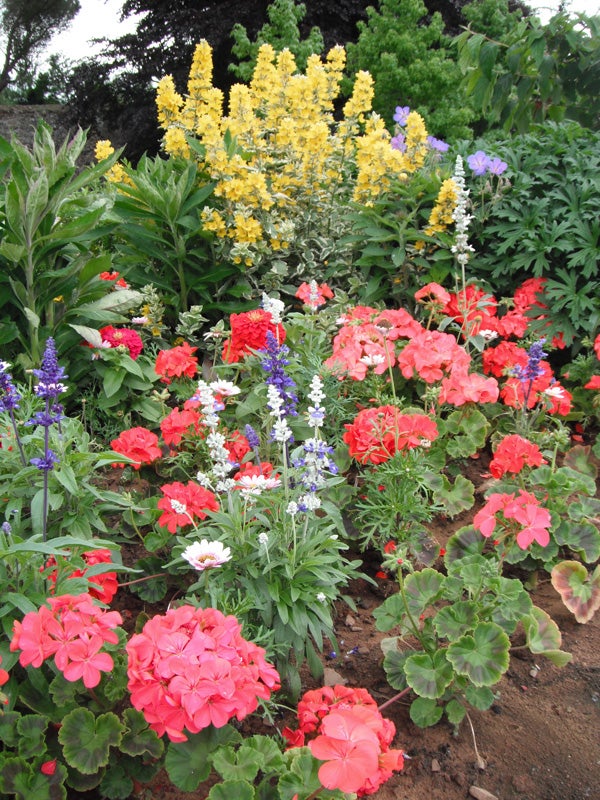 Colour rendition is good, well saturated but with plenty of detail.