This is a camera for which I have been waiting with some interest for several months, ever since a marketing executive from Fujifilm told me that the company was working on a camera which eliminated image noise at all sensitivity settings right up to 1600 ISO – that’s like hearing about a car that goes at 200mph and gets 200mpg. Image noise is the bane of digital photography, so fame, fortune and glory awaits for the company that can conquer it first. The official press release that accompanied the review sample was a little less boastful, but still mentioned a “low noise” ISO 64-1600 sensitivity range, so I was keen to see what it could do. 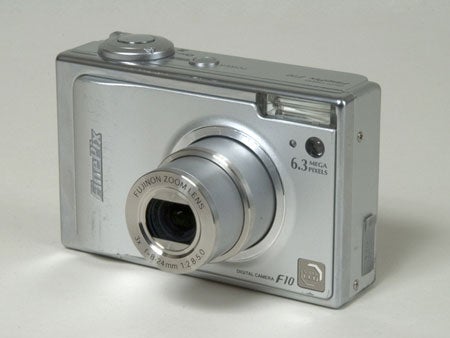 Pitched at the higher end of the snapshot market with a price tag of £225, the FinePix F10 is a decent-looking and well-made camera with conventional and even rather pedestrian styling. Measuring 92 x 58.2 x 27.3mm it sits toward the larger end of the scale for modern zoom compacts, and at 155g it’s also surprisingly heavy for its size. It features a 2x optical zoom F2.8-5.0 lens, a 6.3 megapixel SuperCCD HR and a big 2.5in LCD monitor screen.


The screen is specially toughened to resist scratches, and I can attest that it definitely works. The review sample that I was loaned by Fuji had already been used by one of the camera magazines, and it looked like part of their testing procedure involved kicking the camera down a flight of concrete steps. The corners of the case, the lens surround, the handgrip and the top panel were covered in scratches and scuff marks, but despite this the monitor screen was completely undamaged. Perhaps Fuji should have made the rest of the camera out of the same stuff it uses to coat the LCD. 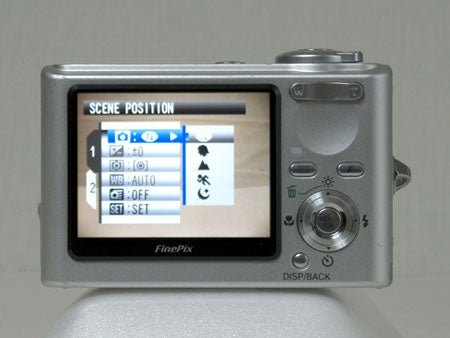 Despite my love of photography, there are few cameras that I would describe as a real pleasure to use, but the F10 is one of them. It feels solid and comfortable in the hand, the controls fall neatly under the fingers and thumb, and respond quickly and positively. The camera’s performance is also exemplary. It starts up in 1.3 seconds, which is respectably quick for a camera in this class. It has minimal shutter lag, and a consistent shot-to-shot time of just over a second in High-Speed Shooting mode. The AF system is particularly good. I was testing this camera alongside a similarly-specified model from another manufacturer, and in every situation the Fuji focused and shot faster. 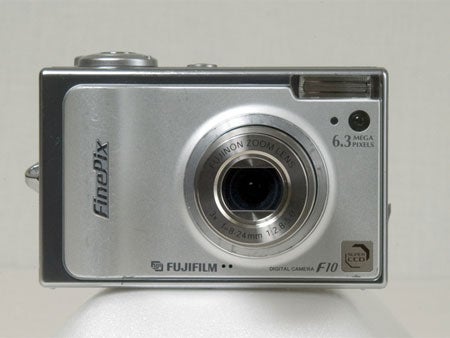 Also worthy of note is Fuji’s claim that the battery in the F10 will last for 500 shots. Unfortunately I didn’t have time to test this empirically, but using the camera over two days and taking around 100 shots didn’t budge the battery condition indicator from its highest level. The camera is recharged via the same socket as the USB and A/V connection, and has a special plug with a three-way adaptor for this purpose.


In common with the FinePix Z1, the F10 has Fuji’s new-look menu system, which is a dramatic improvement over the old one. It is quick, clear and concise, and you can tell at a glance what options are available in each different shooting mode. 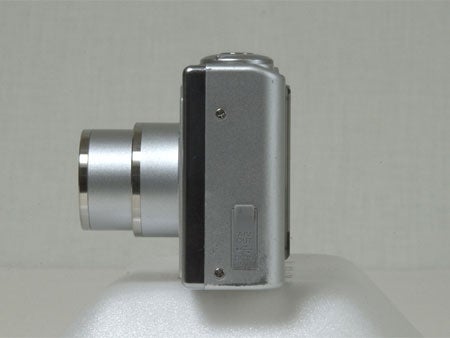 The main control is the big chunky mode dial surrounding the shutter button on the top panel. It has only four positions. SP mode is an automatic mode that offers five scene settings; natural light, portrait, landscape, sport and night scene. Automatic mode disables and greys out the manual exposure compensation, white balance, metering mode and AF mode options in the menu, leaving only the choice of high speed shooting and drive mode.


Manual mode is the setting that most keen photographers will favour, since it offers the greatest degree of creative control, including EV compensation, seven white balance pre-sets including a manual setting, the choice of multi-zone, average or spot metering, and three AF settings including centre, multi-point and continuous AF. Although it isn’t strictly speaking full manual control – there is no manual exposure of focus setting – it does allow enough control for some artistic shots. 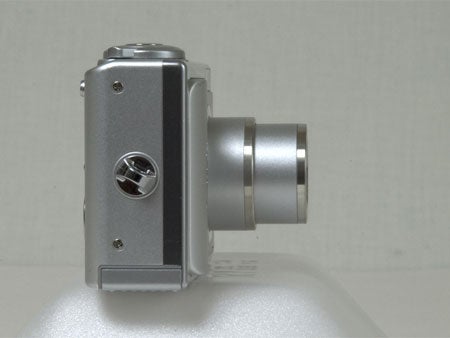 In common with most of Fuji’s range, the F10 also has a Function button that provides quick access to image size/quality, ISO sensitivity and colour mode, with a choice of standard, high saturation or monochrome. The F button functions are available in all shooting modes.


So, on to the big news, and that rather extravagant claim by Fujifilm that it has finally conquered high-ISO image noise. Well, to cut a long story short, it’s pretty much true. As usual with these reviews I took similar shots at all ISO settings, and when I got the camera home and uploaded the images to my PC I was stunned by the results.

Shots taken at 1600 ISO with the F10 were, in my estimation, about as good as shots taken at 200 ISO on virtually any other camera. My first test shots were taken in bright sunlight, but high ISO settings are typically used in low light conditions, so I went out later and took another set of test shots in the evening just to confirm my findings. In fact, although there is some loss of fine detail at 800 and 1600 ISO when compared to 80 or 100 ISO, there is virtually no image noise, which makes the F10 unique in this respect. Finally using a high ISO setting is a real alternative to using the flash in low light conditions. The technology behind this breakthrough is Fujifilm’s new “Real Photo Processor”, of which I suspect we will be seeing a great deal in future models. 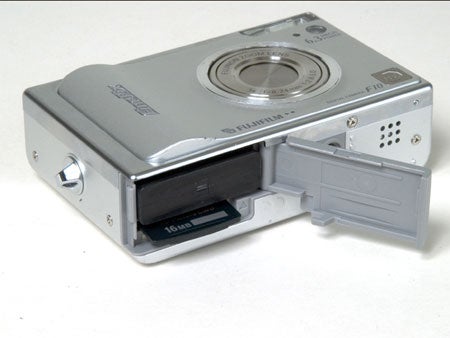 Unfortunately, the F10 does have some image quality faults that rather undermine this unique performance. The exposure system has a tendency to over-expose and burn out highlights, and also suffers egregiously from purple fringes along the top left edges of highlights. This is a fairly common problem with a lot of high-resolution digital cameras, but the F10 does have it worse that most.


Despite these problems, overall image quality is very good. In contrast to the 5.1MP FinePix Z1, which also has a SuperCCD HR sensor, colour reproduction, fine detail and edge definition are all excellent. Combined with the fast AF system this means that the F10 is capable of turning in superb snapshots in a very wide range of lighting conditions, although it is definitely at its best in low natural light. With 6.3 megapixels, images can be printed out at A4 with virtually photographic quality. I can only hope that we will soon see the Real Photo Processor technology in a camera with a higher specification. 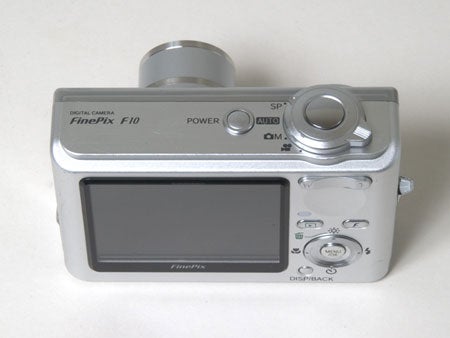 
Slick performance, good build quality and excellent handling, but the biggest bonus is the remarkable high-ISO performance, which produces virtually noise-free pictures in all lighting conditions. It is a real breakthrough, and makes the FinePix F10 a unique camera. Although it is not without its faults, there isn’t another camera on the market that can match its low-light performance. 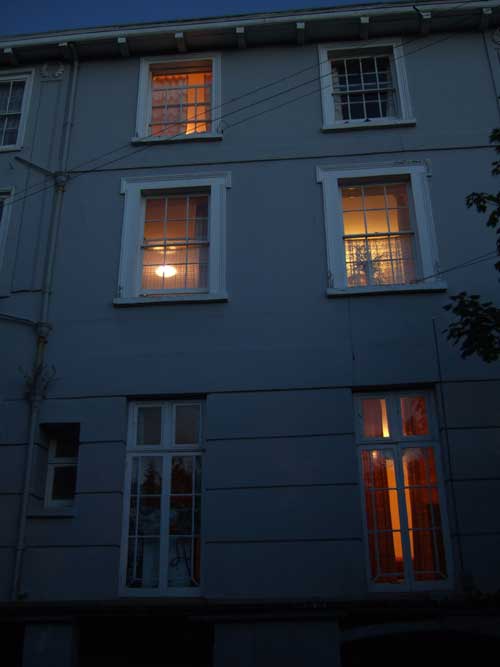 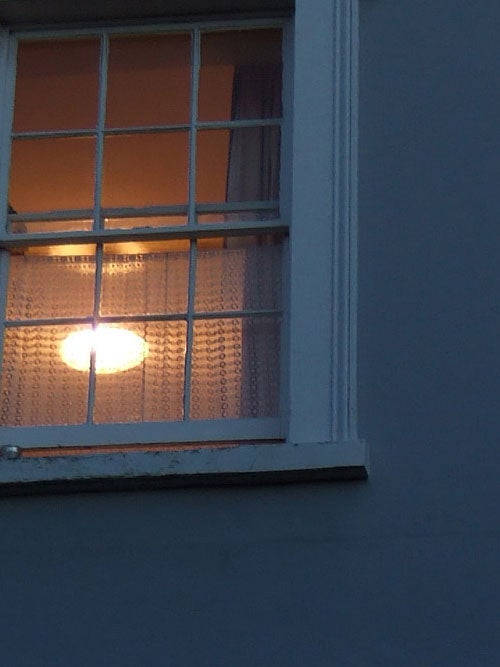 Although the automatic exposure has produced a rather dark shot, the lack of noise at 80 ISO even with a ¼ second exposure is an encouraging sign. 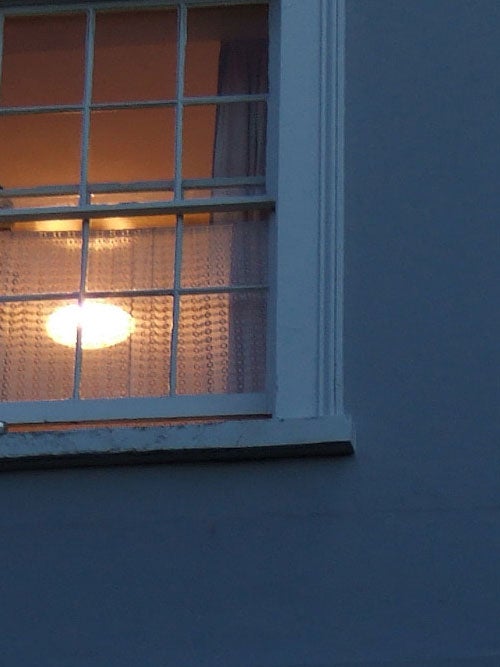 The results at 100 ISO are virtually identical to the previous setting, with this shot also requiring ¼ of a second at f2.8. 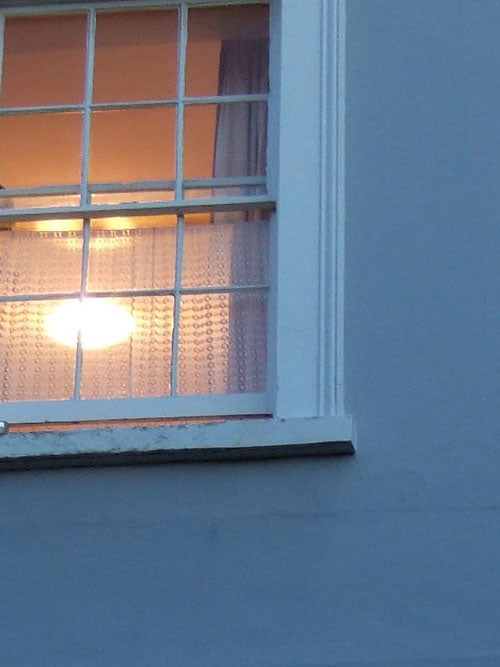 The exposure meter must like f2.8 and ¼ of a second, made lighter in this shot by the 200 ISO sensitivity. Still no visible noise. 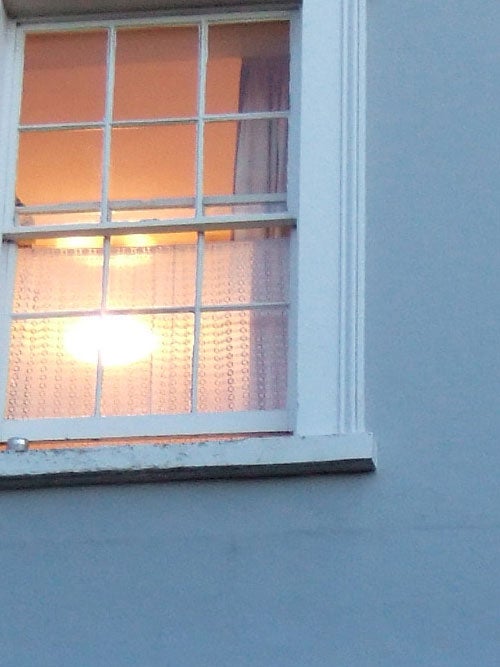 This time 1/5 of a second at f2.8, but at 400 ISO there is still no visible image noise, and enough detail to make out shadows on the wall. Remarkable. 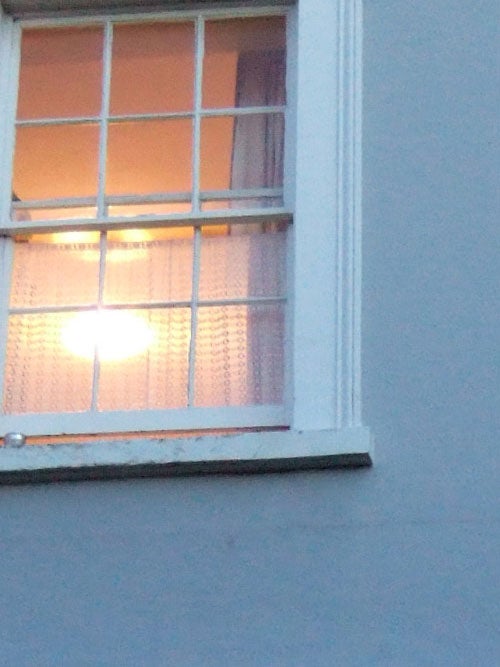 At 1/10th of a second at f2.8 and 800 ISO some noise reduction artifacts are beginning to appear, but even in darker areas there is very little real noise. Astounding. 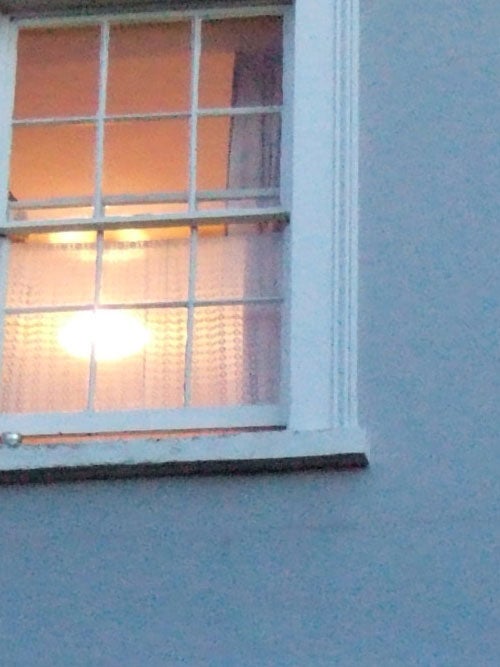 1/20th of a second at f2.8 is virtually hand-holdable, thanks to the 1600 ISO speed setting. There is some visible noise in the darker areas, but little colour distortion, and the image is quite usable. Brilliant! 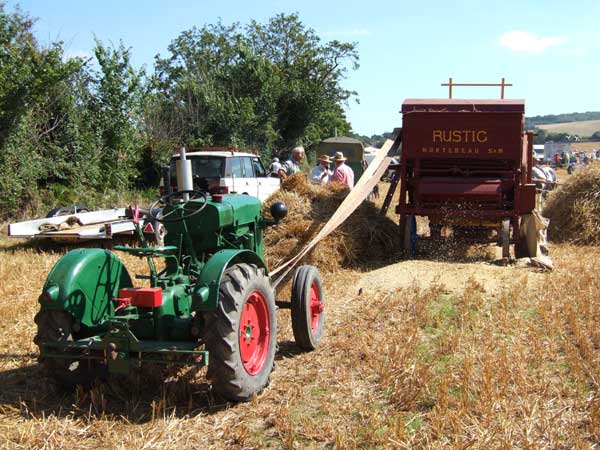 In standard colour mode, the F10 produces a nice natural colour, although I’m pretty sure the sky wasn’t turquoise when I took the shot. 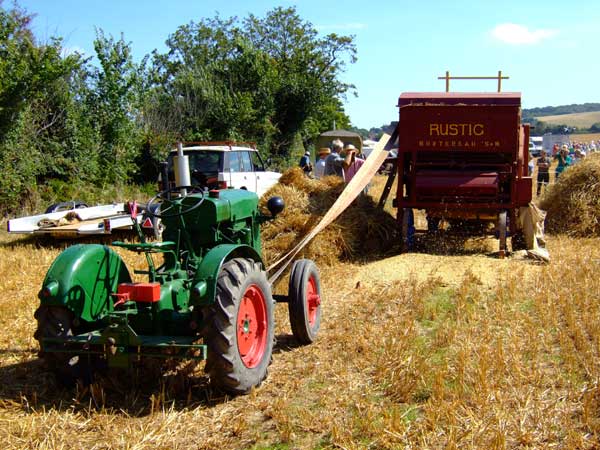 In Chrome colour mode the image is more highly saturated, which for some reason makes it look like it was taken in 1975. 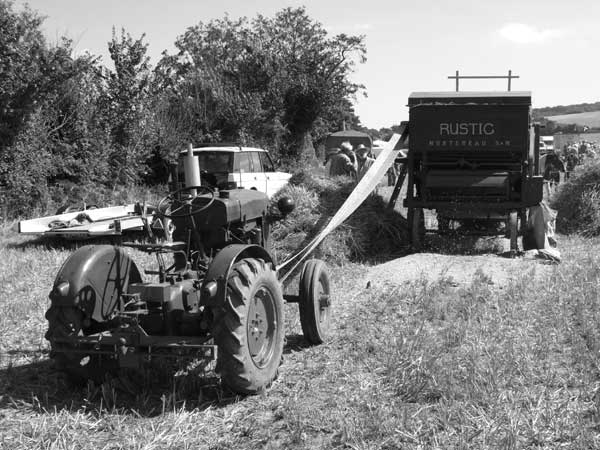 In the black and white mode this rural scene could have been taken 80 years ago, if it wasn’t for the Range Rover in the background. 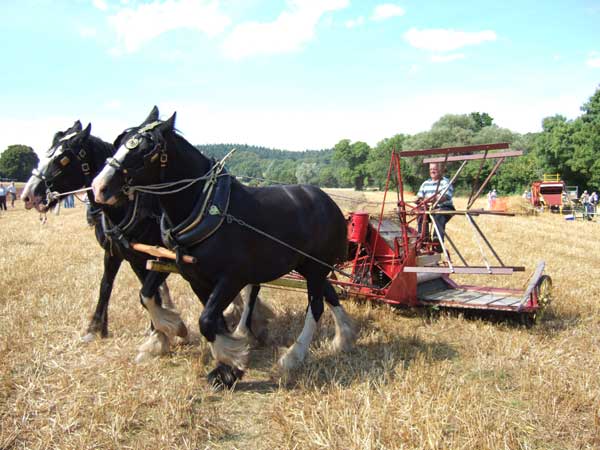 The F10’s fast AF and minimal shutter lag mean that you can capture things on the spur of the moment. Oh, and try counting the legs. I swear there are 10… 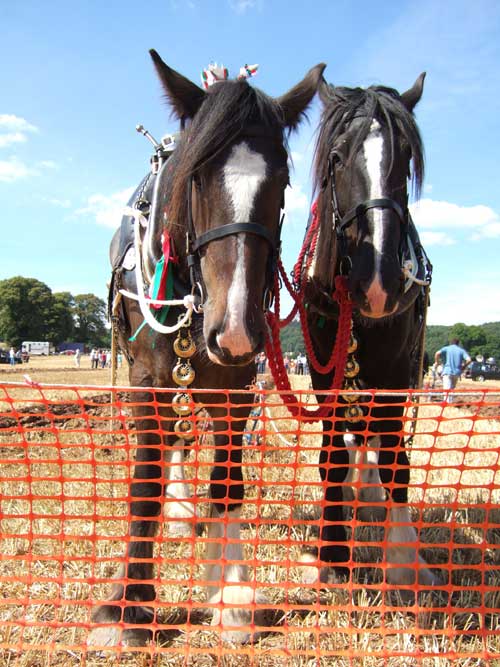 On a bright sunny day, the F10 doesn’t cope well with the high contrast in this shot. However despite the wide angle setting there is no lens distortion. 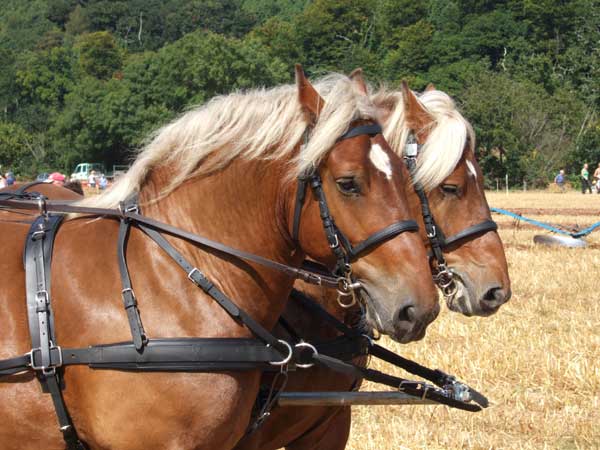 Colour rendition and detail are superb in this telephoto shot, but the exposure system has burned out the brightest highlights.