The funny thing about From Dust is that it leaves you feeling that life as a god wouldn’t necessarily be a bowl of cherries. There you are, creating mighty works for your people to behold, doing your stuff in mysterious ways. You’re creating fertile plains from desert, halting fire, flood and death by molten lava, and it’s all looking pretty damn epic. And what are your worshippers up to? Can they obey simple instructions? Help you out by jollying along from A to B? Not one bit. They’re meandering along as if there’s all the time in the world, picking the route that leads through threat and danger instead of the safe path you’ve prepared. It’s enough to make you throw up your hands and leave the little morons to their fate.

In From Dust, you’re ‘the breath’. The descendants of an ancient tribe have returned to their old homelands, and they need your help to settle, thrive and progress towards their destiny. Age-old totems provide the focal points to found new settlements. Get five tribesmen to congregate around one and a village will be formed. Earth can be gathered in a mighty ball, and deposited to raise land above water and create safe places to live and places to walk. Rivers can be diverted or dammed, and water can be scooped up from one place and dumped in another. Found all the settlements on the map and you can open a gateway to the next one. What could be easier than that? 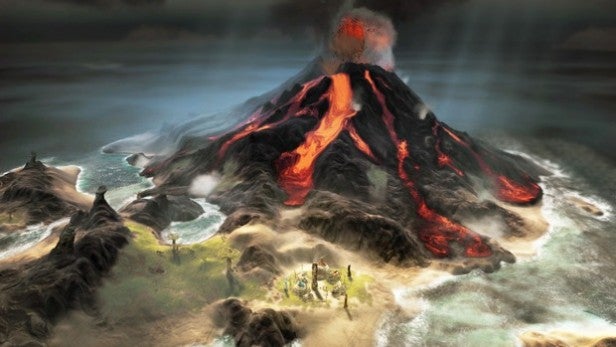 Actually, plenty. In some maps tsunamis strike up every few minutes, drowning the land and whisking your poor villagers away. On others, fire trees set the local vegetation burning, the flames reaching your villages and wiping them out. Volcanoes threaten to spew lava on your people, springs and waterfalls might flood the plains, or the earth moves in weird cycles, raising one area while dropping another under water. Getting new totems settled while keeping your existing villages going is no simple task. 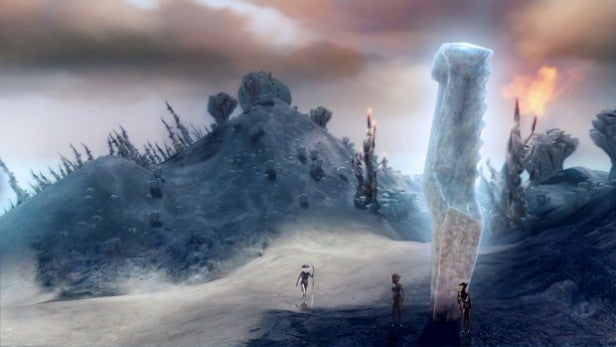 Luckily, there are powers you can use. Tribesmen can learn chants to repel water. Firetrees can be uprooted, or you can move water plants nearby that release a flood when they kick off. You can use blanket powers to dry the land or reduce the spread of fire, and even use a nifty power to jelllify water, creating dams out of the river, or literally parting seas.

Most of all, From Dust is a game about balance. Fire trees might be a continual source of disaster, but they can also keep waters at bay, so in the right situation they’re useful – even crucial. Lava can be a killer, but if cooled it will make walls to protect a village. And while water is a constant nuisance, you need it to fertilise your plains. All the time, the various elements, plants and creatures in the world are interacting and learning how these interactions can benefit you is the essence of the game. 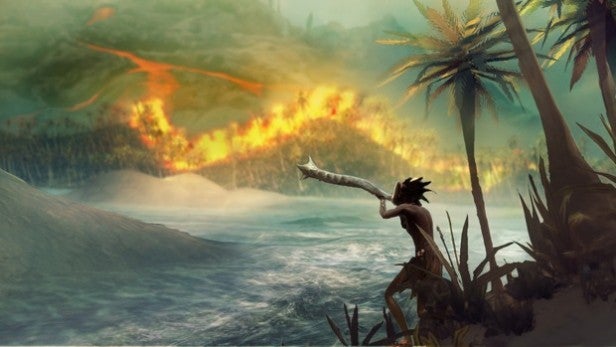 Now, while you’ll encounter naysayers stating that From Dust is boring, mechanical or too aggravating for words, the truth is that it’s nearly wonderful. Despite running at a sub-HD resolution, the graphics are stunning – particularly when you remember that this isn’t a triple A title but a budget-priced download game. There’s a sense of awe when you encounter the game’s natural calamities, and the feeling as you mould earth, lava and water, watching flood spill or rage across the landscape, is that this is a truly epic strategy game. In fact, this is what we’d like Populous to look like if it were to be re-released this year.

Unfortunately, From Dust doesn’t always play quite as well. Sometimes it’s because the instructions aren’t quite clear enough, or because the objectives, especially those with time limits attached, are just on the wrong side of the challenging/infuriating line. Mostly, though, it’s because your tribesmen are so stupid. Let’s not get carried away here; these are complex landscapes, constantly shifting, and it must have been a struggle for the developers to get these chaps from A to B at all. All the same, the fact that you find yourself failing so much in later stages just because you can’t trust your guys and girls to take the fastest or most obvious route is a real irritant. You want them to use the bridge you’ve dragged up from the ground, but instead they’re blundering around on the shore. You give them an easy path from place to place, but they’d rather try to climb up a steep-sided mountain. 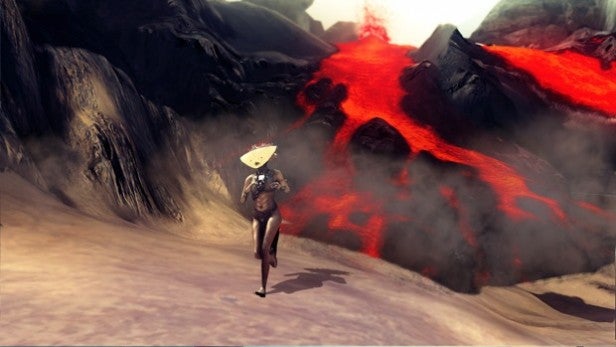 Annoying? Yes, but not a deal-breaker. While From Dust can be a mix of the sublime and the ridiculous, there’s enough of the former to make it worth playing. It’s reasonably lengthy, with a nice selection of short challenge missions to complete, and the biggest regret is that, at times, the action is a bit too frantic to let you have the chance to play with the landscape and let your god-like powers loose. It’s not perfect, and it’s not the heir to Populous that some of us will wish it might have been, but the experience as a whole is fascinating and – in today’s world of endless shooters and clones  – almost unique