It’s taken over a year but Freecom has finally added wireless capabilities to its neat little FSG-3 Storage Gateway desktop NAS appliance. We first looked at the Storage Gateway back in 2005 and were mightily impressed with the range of features it offered. The WLAN model delivers pretty much the same facilities but now includes an 802.11g wireless access point. 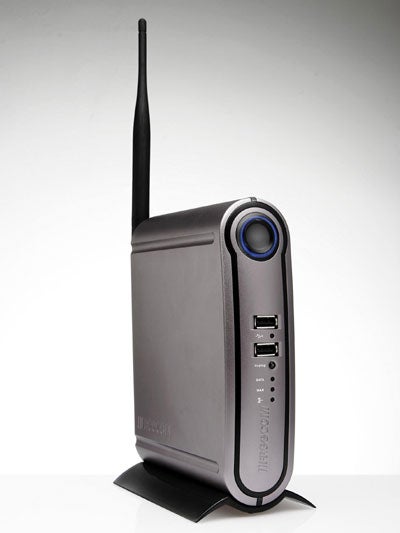 The Gateway uses a standard ATA drive with four models available ranging from 160GB to 500GB. It provides shared network storage over CIFS/SMB or FTP so Linux or Macintosh systems will need to access it over either of these protocols as it doesn’t support NFS or AFP. Four USB 2.0 ports are up for grabs and can be used to connect other external storage devices or printers for sharing. Alas, Gigabit Ethernet isn’t on the menu as the Gateway still provides only four switched Fast Ethernet ports, one of which is designated for WAN duties.


Internet access can be dished out to all users simply by connecting an ADSL or cable modem and the Gateway provides firewall protection. Four connection modes are available with PPPoE and PPTP supported along with dynamic and fixed IP addresses. Using dynamic addressing we connected a simple intelligent ActionTec ADSL modem and had Internet access up and running in seconds. Along with the USB variety the Gateway also provides an eSATA port for connecting external hard disks over a high-speed 3Gbps link. 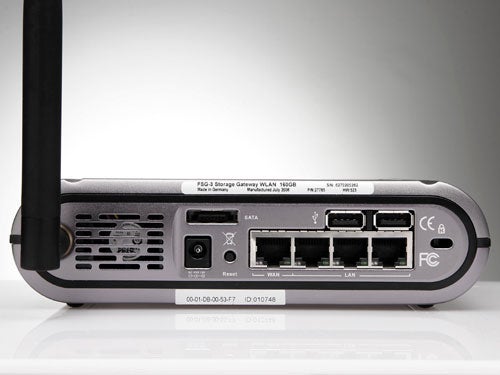 When we looked at the standard Gateway, eSATA devices were very thin on the ground but the situation has improved since then. Freecom offers its own Hard Drive Pro models with eSATA interfaces and Seagate also has a range of external drives as well. The Gateway needs to be powered down before adding an eSATA drive which must also be preformatted as FAT32 if you want read and write access. A great idea but if you’re sharing an eSATA drive over the network then all its speed benefits will be lost as the Fast Ethernet switch will simply smother its performance potential. In fact, Seagate’s drives are aimed primarily at a direct connection with a PC as they come with a PCI eSATA card included (see our review of the Seagate eSATA drive).


Appliance installation won’t take long as the bundled FSG Assistant locates the Gateway on the network for you. The web management interface has been redesigned and although it’s still somewhat basic it does provide easy access to all the functions. Shared folders are simple enough to set up and security options have improved as you can create users and groups and determine whether each has read only or read/write access. Storage usage can be controlled by assigning quotas in MB or GB to selected users.

Performance over CIFS hasn’t improved over its predecessor with a 690MB video file written to the Gateway from a Supermicro 3.2GHz Pentium D system on the LAN in 130 seconds for an average of 5.3MB/sec. As expected, read performance was slightly better with the file copied from the Gateway at a rate of 6.5MB/sec. These speeds are roughly par for the course for the majority of single drive desktop NAS appliances using Fast Ethernet ports. Wireless performance for file copies was uninspiring with the same test file copied from a Fujitsu Siemens LifeBook equipped with a Proxim 802.11g wireless PC Card in 356 seconds for an average of 15.5Mbps.


A big bonus of the Gateway is the sheer range of features to play with. It offers an email server which lets you set up your own internal mail addresses without the need for an ISP. The FetchMail utility can be used to pull mail from an external server and allocate it to selected local accounts on the Gateway. The main point to be aware of is the appliance uses DDNS and, as the manual observes, you may find that a lot of mail servers consider mail from these types of addresses to be spam. You don’t get much help in setting it up but the appliance uses the TwonkyVision MediaServer v3.1 for dishing up multimedia content to UPnP devices. 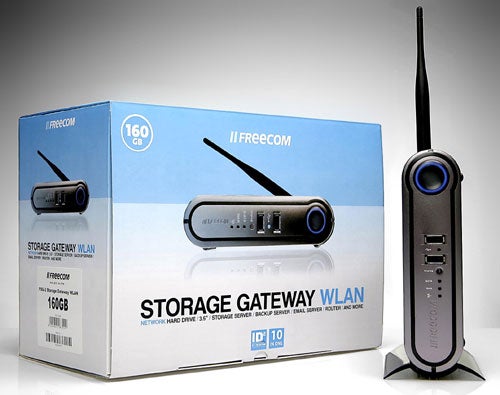 The bundled Acronis True Image software lets you secure hard disk images to the appliance although this is the OEM version which only allows whole hard disks to be imaged and restored. For around £20 you can upgrade to the full version which adds features such as scheduled and incremental backups. The appliance runs MySQL so it can manage a database while the Apache web server can serve up your own web pages to the Internet over HTTPS. The same applies to FTP services while port forwarding can be used to open up access from the Internet to specific PCs. Wireless security extends to WEP and WPA/WPA2 encryption and an access control list uses client’s MAC addresses to block or allow access to specific systems.


A compact NAS appliance offering a whole heap of features at a reasonable price. Performance is on a par with similar appliances in this price range and security has been improved over the previous model although the documentation could be a bit more helpful with many of the services.

Security has been improved to allow read and read/write access privileges to be applied.

The appliance had no problem identifying USB storage devices and printers during testing.

The integral mail server allows you to grab mail from an external server and hand it over to Gateway user accounts.

Noise levels are unobtrusive but don’t choose ‘hot and silent’ if you value your hard disk.