We’ve seen a fair few NAS appliances over the past year but Freecom’s latest FSG-3 Storage Gateway takes the accolades for offering more features than you can shake a stick at. On the storage front you get an internal hard disk with a choice of capacities and the appliance offers this to the network as shared storage for Windows, Macintosh and Linux users. Four USB 2.0 ports are provided for adding more external devices and these accept any combination of flash disk, external hard drive or optical drive. You can also add USB printers for sharing over the network as well.


The appliance also has an eSATA (external SATA) port for attaching high-speed external hard disks. This is a relatively new standard that’s designed to get SATA (serial ATA) ‘out of the box’ and supports 3GB/sec interface speeds so it’s up to six times faster than USB 2.0. Note that the external interface is different to the standard SATA plug as it’s a shielded version and doesn’t have an ‘L’ shaped key. At the moment eSATA external drives are very thin on the ground and Freecom advised us that it plans to launch eSATA external drives early in 2006 which will use the same enclosure as the FSG-3 so will be stackable. 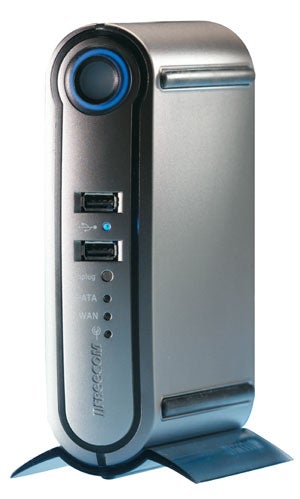 The FSG-3 incorporates four Fast Ethernet ports with one acting as a WAN port for connecting an external ADSL modem. An internal DHCP server dishes out IP addresses and DNS details so LAN clients can have Internet access and this is protected by an SPI firewall. It’s a well built little unit that’s much smaller than the Shared Storage Drive and Netcenter drives from Maxtor and Western Digital. Status indicators are plentiful as the large blue button at the top of the unit shows the status of the OS and whether the unit is booting whilst a ring round the outside reveals hard disk status and activity. Separate LEDs are provided for the eSATA and WAN ports and a button below the USB ports is used to shut devices down ready to be safely unplugged.


The amount of electronics packed into the appliance means heat output is high and the cooling fan is a little intrusive. However, you can opt for three different cooling modes where the standard mode switches the fan on as required while maximum cooling mode leaves it on permanently. There’s also a ‘hot and silent’ mode which conjures up all kinds of connotations but is not worth using. The manual specifically advises against selecting this as it’ll probably reduce the longevity of the appliance and internal drive.

Installation is simply a case of connecting a PC, leaving DHCP to handle address assignments and pointing a web browser at the appliance’s default IP address. Alternatively, you can use the bundled FSG Assistant software to discover it automatically. The home page opens with options to view shared folders or go into the main configuration page. Only one default user has administrative privileges and is allowed to view all available shares and manage the appliance. For Internet testing we connected an intelligent ActionTec ADSL modem which the appliance accepted without any problems.


Users and groups are set up from the security page and after creating shared folders you can determine access based on username and group membership. There are no controls to enforce read only access but the latest firmware version does add quotas for managing space allowed for each user. General file sharing performance was good as copying a single 690MB video file from a workstation to the FSG-3 took 130 seconds for an average speed of 5.3MB/sec – virtually the same as for the Maxtor and Western Digital appliances. 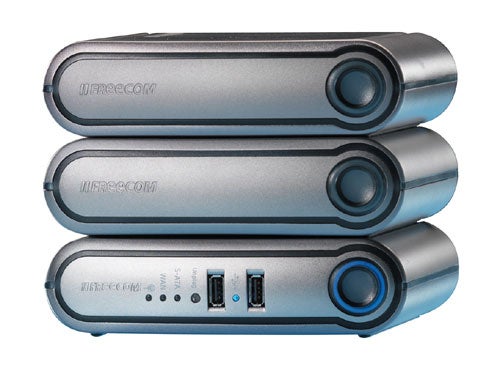 The FSG-3 runs an Apache web server, supports SSL encrypted access and allows the server to be accessed from the WAN. An FTP server is also provided which uses the same user access settings for the shared folders. As with the web server you can open it up to the Internet and use SSL encryption as well. Port forwarding allows you to open up access from the WAN to specific PCs and usefully this supports multiple IP entries and port ranges.


Printers are easy enough to share and we had no problems with an Epson Stylus Photo 950 which was added using the Windows wizards. As always, if you use a local printer and ink level monitoring utility it’s unlikely it’ll work with the printer attached to the appliance – it certainly didn’t for our Epson printer. The bundled Acronis True Image software could prove valuable as it allows you to take hard disk images and store them on the appliance. However, the version provided only allows whole hard disks to be imaged and restored and if you want features such as scheduled and incremental backups you’ll need to upgrade which will cost around an extra £20.


The FSG-3 certainly wins out for storage options and looks a great all-in-one small office appliance for storage and general Internet access. However, the gains in connectivity features are offset by the current lack of eSATA drives and limited access controls for shared folders.

USB storage can be plugged in and shared and the appliance can also allow USB printers to be networked.

Updating the firmware gives you quotas so storage usage can be controlled on a per user basis.

You can keep an eye on internal temperatures and choose from three cooling modes.

The appliance can act as a VPN server but help for this topic is thin on the ground. 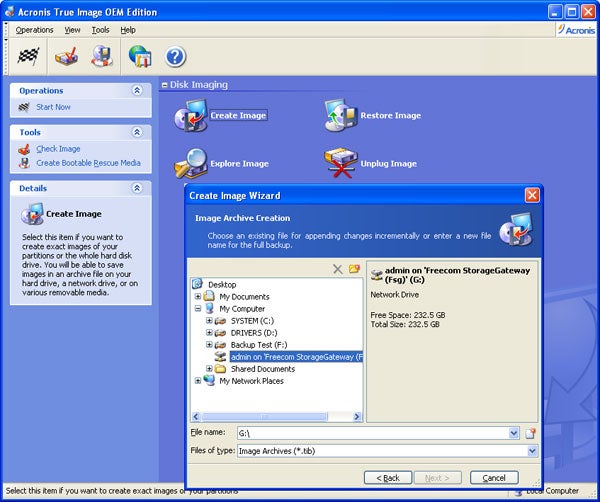 The bundled Acronis software can create and store hard disk images over the network to the appliance.