Foxconn might not be a familiar name to you, but chances are that its technology is already in your current PC as it makes the I/O connectors and cables for many motherboard manufacturers. Recently, it decided to move into the motherboard market as a brand in itself and the 955X7AA, based on Intel’s 955 chipset for Socket 755 processors, is the first of its products to arrive at TrustedReviews for review.


For its AMD chipset boards, Foxconn is using the Winfast brand, which confusingly is used by Leadtek for its graphics cards. The Intel chipset boards are simply labelled Foxconn. I was really impressed with the box that this motherboard came in. It’s made out of very thick cardboard with a magnetic lock, which is fairly pointless, but pretty cool. 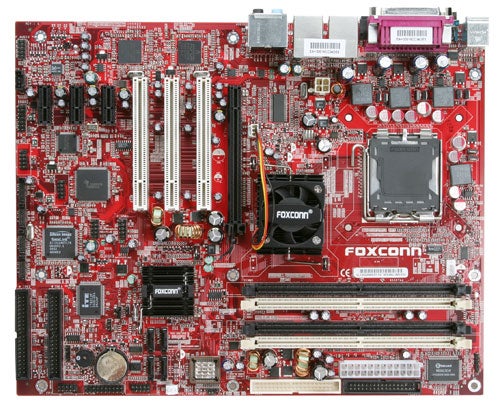 The board itself is rather dull looking with a red and black colour scheme with a few white slots. This doesn’t really matter unless you’ve got a case with a window and loads of fancy lights, but aesthetics has become an important factor these days. Personally, I think features are more important and Foxconn doesn’t disappoint here as the board is crammed full with the latest technology. As the name suggests the 955X7AA is based on the Intel 955X chipset and supports all the latest Intel Pentium 4 and Pentium D processors – as well as the 1066MHz bus Extreme Edition parts. As the current Intel chipsets have a limitation of a single IDE connector for up to two devices, Foxconn have added an ITE IDE RAID controller which adds support for another four devices.


If you’re building a new system and are planning to use SATA drives then the 955X7AA has plenty on offer. On top of the four SATA devices that the Intel chipset offer there’s an additional Silicon Image controller that adds support for another four devices. In addition there’s dual Broadcom Gigabit Ethernet contollers – one on the PCI Express bus and one PCI bus – as well as FireWire 400 and FireWire 800 support. That’s not a bad set of features and the latest FireWire technology could be particularly useful if you need to shift a lot of large chunks of data using something like this external Maxtor FireWire 800 drive. 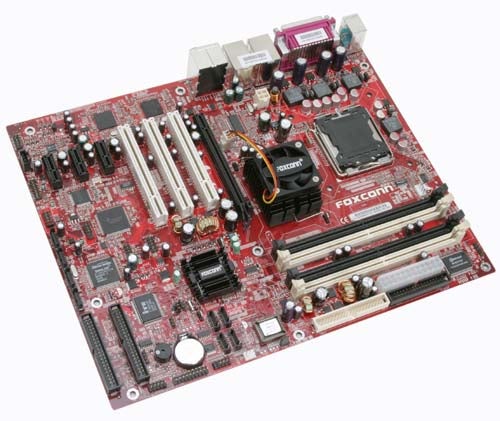 The features don’t stop there though , with USB 2.0 and 7.1-channel Intel High Definition Audio to add to the list. Looking at the I/O connectors on the back you’ll find two PS/2 ports, a single serial and parallel port, four USB 2.0 ports – with a further two on a supplied bracket – the two Ethernet connectors, optical and coaxial S/PDIF output and six 3.5mm audio jacks for the 7.1-channel audio as well as line in and microphone inputs.

In terms of expansion slots you get a single x16 PCI Express slot followed by three PCI slots and three x1 PCI Express slots, so there is plenty of expandability options available. This is also the first motherboard I have come across that features a TPM (Trusted Platform Module) connector, although no module was provided with the board.


Looking at the board design I’m sorry to say that this is one of the messiest boards I have seen in a long time with connectors and headers scattered all over the board. It’s also quite disappointing to find only a single spare fan header, as the second one is taken up by a fan used to cool the chipset heatsink. Again, this is a slight letdown, as passive cooling would’ve been preferred. On the other hand the ICH7R is passively cooled by a small heatsink. 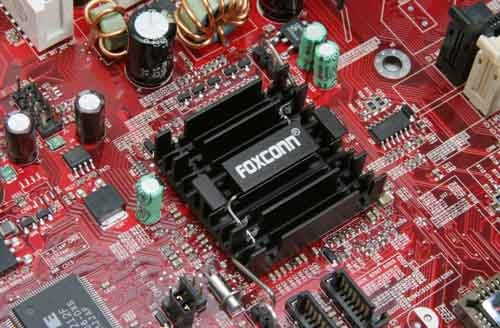 Moving on to the accessories in the box you get two rounded IDE cables, a rounded floppy cable, a FireWire 800 and a four and six-pin FireWire 400 brackets, eight SATA data cables (only two pictured as six were missing) and two SATA power splitters – each with support for two drives.


The manual isn’t bad, but if you follow it to the letter you’d be stuck with some outdated hardware as it suggests that you can only use certain certified memory, graphics and CPUs with the board, which is somewhat restrictive. There’s also a multi-lingual quick setup sheet which covers the basics and gives you a large colour overview of the board and its connectors. 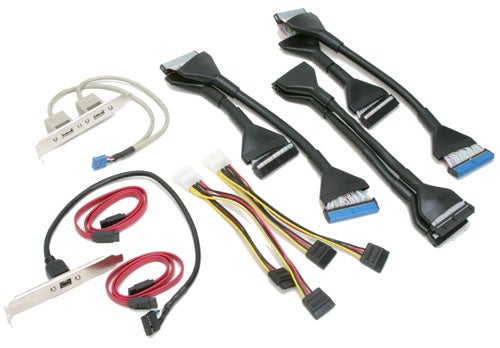 So on to the test results. We’ve moved onot a new test platform for Intel motherboards to aid future comparisons but for now these are stand alone results. The 955X7AA scored an acceptable 203 points overall in SYSMark 2004. Moving on to PCMark 05, the Foxconn turned in a score of 5025, while in 3DMark 05 it hit 4918. This is lower than previous 955X results, but then the 3.8GHz Pentium 4 670 is a slower performer than the 3.73GHz Extreme Edition we were using.


At £135.11 the 955X7AA is reasonably priced for a 955X based board but there’s nothing exceptional about the features or performance and Foxconn needs to improve the board layout before it can compete with the long time established brands.


The Foxconn 955X7AA is a feature laden board at a reasonable price; however the board layout could do with some work.