What is the Formlabs Form 1+?

The Formlabs Form 1+ isn’t like most 3D printers you will have seen. Most consumer 3D printers are of the FDM (fused deposition modelling) variety, which means they squirt molten plastic through a nozzle in layers to build up a print. The Form 1+, however, is an SLA (stereolithography) model, which prints using resin and lasers. Sounds awesome, right?

The build platform, onto which the print is built, is upside down and dips into a pool of resin below, where lasers are used to harden a layer of resin to the correct outline. The platform raises a fraction for the next layer to be hardened, and so on and so on until the complete model is printed, rising wholly from the resin tank like a T-1000 forming from a pool of molten metal. But much, much slower.

The Form 1+, now available in the UK from RS Components for just under £2,000, is capable of outstandingly detailed prints, but it’s not without its drawbacks… 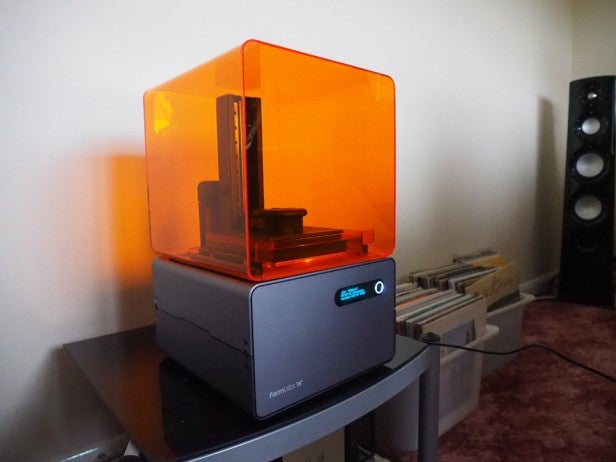 The Formlabs Form 1+ is a beautiful object – the most nicely designed and built 3D printer we’ve seen. If Apple made a 3D printer, it’d probably look like this.

The base, which houses the lasers and motors, is classily encased in metal. It has a simple three-line display on the front, as well as a button that’s used to confirm that you’re ready to start the print, and to cancel it if need be. The power button is a simple switch around the back, next to the USB socket.

The striking upper is dominated by an orange Perspex box that hinges backwards to allow access to the resin tank and build platform. The reason for the orange tint is that the resin is light-sensitive – hence why lasers are used to harden it – and shouldn’t be subjected to direct sunlight for any length of time.

The build platform is easily removed by pulling a handle on the top, which releases it so you can slide it off. The resin tank is similarly simple to slide out, meaning you can buy multiple tanks and have them each filled with a different colour of resin. 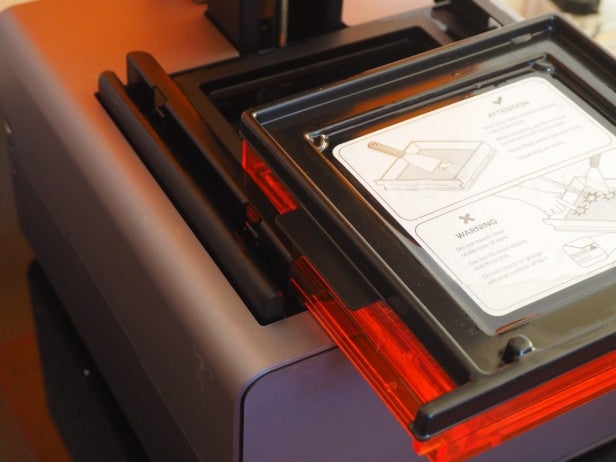 The resin tank slides out for cleaning or replacing

This is all proper future desktop stuff, not just because of the styling and build, but also its size. The relatively compact footprint means it’ll sit nicely alongside your iMac or similarly chic PC.

However, with that compact form comes a build platform that’s just 125mm square by 165mm tall. In 3D printing terms, that ain’t big.

The first step in setting up the Form 1+ is to download Formlabs’ PreForm software. This is where you’ll load your 3D print file, move or resize it as necessary, add any support structures that may be needed to print the model without it all collapsing, and choose the resolution of the print.

PreForm is clear and simple, covering all those basics nicely, although it took us a while to work out how to get full control over the viewing angle of the 3D preview. A few of the options are too well hidden and it takes a fair amount of investigation to discover features such as the layer-by-layer preview which lets you see a cross section of your model at any point in its height to check for thin walls or enclosed voids. 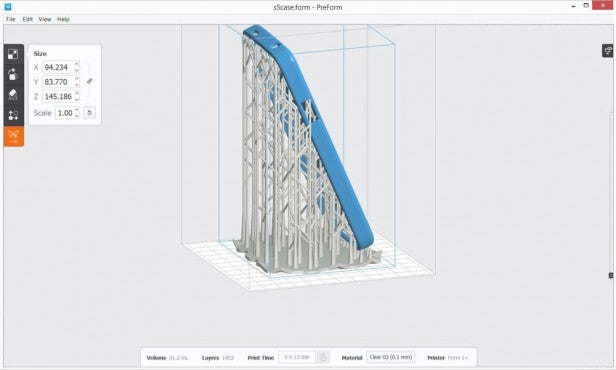 A nice touch is that it can offer you an estimate of how long the printing will take, before you even commit to the print. We found it to be accurate to within a few minutes, which isn’t bad considering how long the Form 1+ takes to build things. But we’ll come to that later.

Before you can start the print, though, you’ll need to prepare the printer. The resin tank has indicator lines showing roughly up to what level to fill it with the thick, gloopy resin. Formlabs then advises to drag a scraper (supplied) across the bottom of the tank, and then sift the resin with a comb (not supplied) to remove any solid residue.

This is the point where you realise what a sticky business this is. It’s a good idea to have something handy to place the scraper and comb on until you can clean them. Again, we’ll come to the cleaning later. 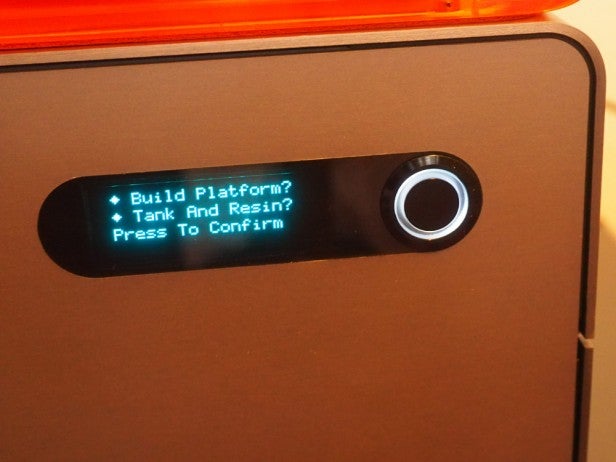 Sadly the Form 1+ doesn’t have an SD card slot, so it has to be USB tethered to your computer while the print uploads to it. Once the upload has finished, though, you can disconnect – so you’re not too restricted in where you keep the Form 1+ unless you use a desktop computer rather than a laptop.

The solitary button on the front of the Form 1+ then lights up and a message on the display asks you to press the button to confirm you wish to print. And you’re off… 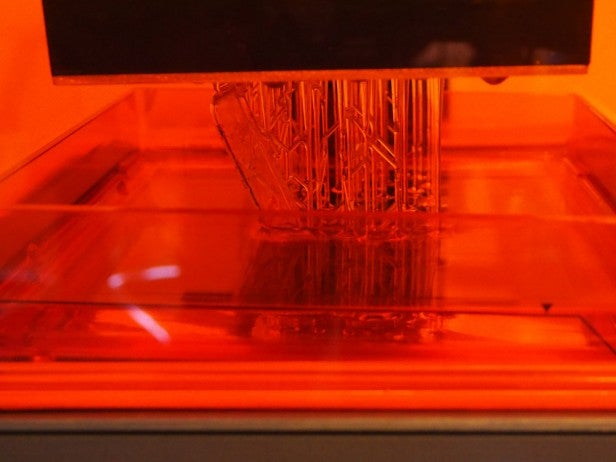 For our first print, we went straight in at the deep end with a file we’ve tried a few times before with quite variable results – a case for a Samsung Galaxy S5. The Form 1+’s build platform was too small to print it flat, so the model had to be tilted heavily and then a support structure was added. It ended up looking like a crazy cyberpunk skyscraper.

Set at a 0.1mm resolution, it took the best part of five hours to finish printing. Even set to the lower 0.2mm resolution, the Form 1+ is a bit of a slowcoach. One of our test prints took 2 hours 10 minutes, compared to 2 hours 1 minute on the SeeMeCNC Orion Delta and 1 hour 35 minutes on the MakerBot Replicator 2X.

It does sort of makes up for the lack of pace by being rather quieter than most, though. It starts almost silently, then there are intermittent motor noises up to 69dB (from 1m away) as the resin tank and platform move. 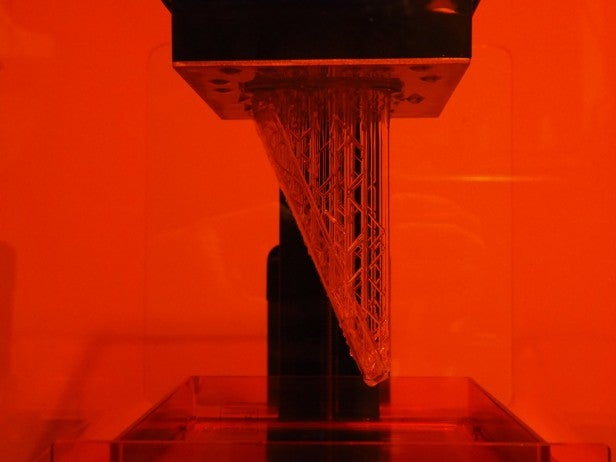 You may have guessed one of the major drawbacks of having a print rise out of a pool of sticky resin. Yep, your model is still dripping like Winnie the Pooh’s paw popping out of the honey jar. This is where the supplied finishing kit comes in.

Having removed the build platform, being careful not to drip anywhere, you’ll need the scraper to get the print off the platform. There are a couple of sealable tubs supplied, one of which you’ll need to fill with isopropyl alcohol, which you’ll have to buy separately – it costs about £15 per litre from electrical goods shops. Dunk your print in the alcohol, give it a good shake to agitate it, and leave for a while until the alcohol’s washed most of the resin off. 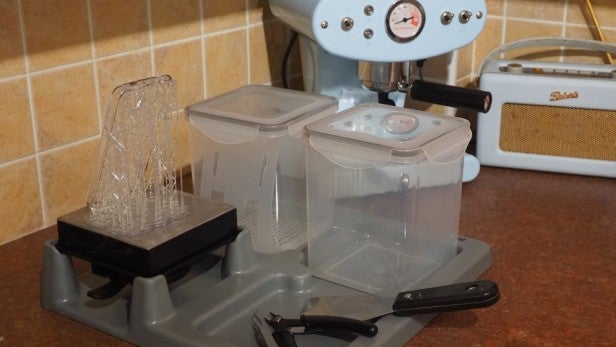 In our experience, it took a few repetitions of this process before the surface stopped feeling rather tacky. And the fumes from that isopropyl alcohol are potent – took us right back to school chemistry lessons. Once you’re happy that it’s clean, it’s time to remove any support structures using the supplied pair of snips and tweezers. 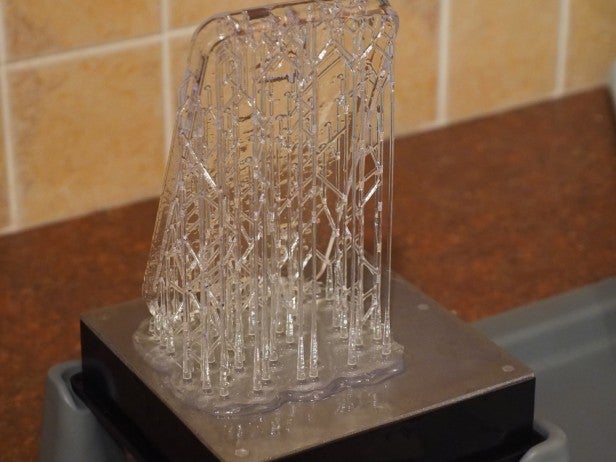 The good news is that, after all this, the print quality is extremely impressive. Even at a fairly coarse 0.2mm layer resolution, the print detail was finer than we’ve seen from any other consumer 3D printer. It was particularly good at handling complex shapes, probably because there’s no print nozzle getting in the way. And at 0.1mm resolution it was just stunning.

Yay, SLA printers are the future! Well, hang on. There are again downsides to go with the upsides…

Because of the way the Form 1+ prints, you can’t see whether there have been any initial problems until well into the print process. With smaller prints, you won’t know whether they’ve been successful until they’re finished. And due to the high cost of the resin – €135 per litre – we’d really like to have been able to spot and cancel a failed print before too much precious resin’s been wasted.

Talking of wasted resin, you’ll find a certain amount of the resin cures on the bottom of the tank, leaving a layer that needs removing with the supplied scraper. Not removing it results in failed prints. You need to be extra careful if, like us, you use clear resin, as it’s extremely difficult to tell whether any has cured on the tank bottom – if the scraper encounters a little friction as it’s dragged through the tank, you probably need to get scraping.

It also struggles with large flat surfaces if they’re positioned parallel to the built platform. Part of the learning process of using the Form 1+ was finding we had to tilt flat surfaces to around 45 degrees to avoid them coming out with a rough, blistered finish. It’s another example of the differences between an SLA printer and the more common FDM models.

One last drawback of the SLA process is that a print that includes a large enclosed object will end up with uncured resin sealed inside them, so the 3D file has to be adapted beforehand with an added hole or two. Or you’ll have to get your power drill out afterwards. 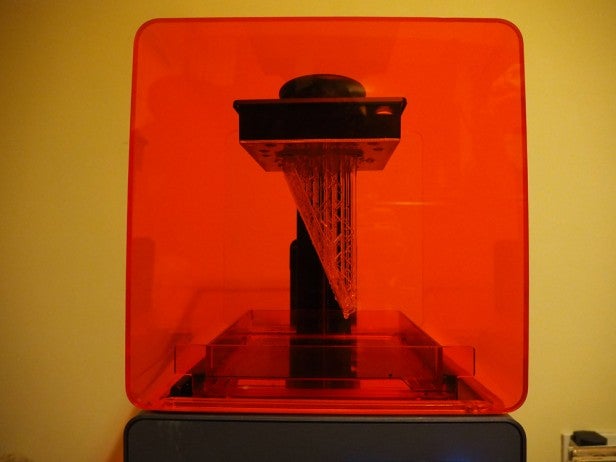 Should I buy the Formlabs Form 1+?

If you want the absolute best-quality prints from a desktop 3D printer, and don’t need to make anything big, this is the one. While most FDM 3D printers turn out objects best described as prototypes, the Form 1+ gets very close to the finished product.

However, the long-term pricing places it firmly in the category of working tool rather than an enthusiast’s machine. Not only is there a hefty upfront cost, but the consumables are prohibitively expensive for most.

A 1-litre bottle of resin is €135 (around £100), and doesn’t last as long as a £30-ish 1kg spool of ABS filament for an FDM printer such as the MakerBot Replicator 2X. The resin tank also needs replacing regularly – after every two litres or so of resin – and costs another €55. Then there’s the isopropyl alcohol required for cleaning prints, which is about £15 per litre.

You have to really need this 3D printer, rather than simply yearn for it.

Capable of stunningly high-resolution prints, but the small build platform and enormous long-term costs place the Form 1+ in a rather tight niche.