Towards the end of 2004 two games were released, both with the same intention: to reinvigorate the moribund horror genre. The first, Resident Evil 4, took the existing elements and upped the ante with an almost lunatic zeal, revamping the controls, speeding up the pace and creating an awesome, breathless, stress machine of a game that hit you with wave after wave of feral yokels and crazed monks. Radical? Yes, but the second game arguably went further. Where survival horror had often settled on Western settings, Forbidden Siren took the Project Zero approach and explored the more unsettling vistas of Asian horror. Out went the central hero and linear storyline, in came multiple protagonists and a narrative shattered into numerous, inter-related segments. 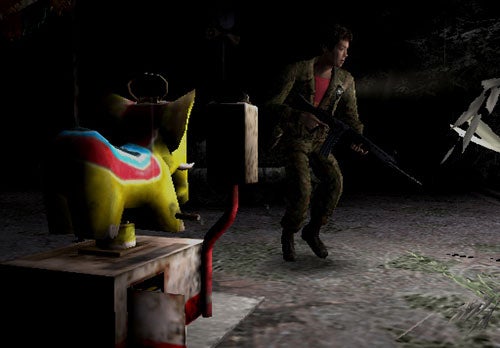 Out too went tooled-up, tough-guy heroes and combat-driven gameplay, in favour of tense situations that put you at the mercy of a horde of murderous, surprisingly intelligent zombies – called shibuto – most of whom couldn’t be permanently disposed of no matter how hard you tried. In fact, your main weapon in the fight for survival was an ESP facility, dubbed ‘sightjacking’, which enabled you to see through the eyes of your would-be killers. By watching their behaviour and looking for signs of your character – blue and green indicators revealing their current location – you could creep past them while they were looking in the wrong direction, and so get where you needed to go undetected.


However, while Resident Evil 4 was an unalloyed triumph, Forbidden Siren bore rather more mixed results. Yes it was unique. Yes it was atmospheric, free from cliché, frightening and mysterious. But was it actually enjoyable? Maybe not. Its horrendous difficulty level, made worse by a lack of in-game assistance and sensible checkpoints, crippled the game for many players. Moreover, the whole experience was utterly bewildering. What’s going on? What am I meant to do? How can I avoid that guy killing me? It was the game www.gamefaqs.com was made for. 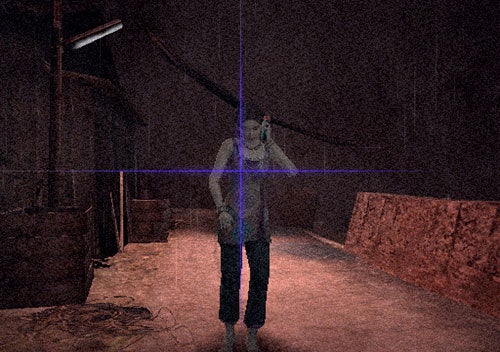 Well, the good news is that the path into Forbidden Siren 2 is an easier one. Early missions take you through the basics of movement, combat and sightjacking, while pre-mission hint screens give you useful tips that apply to the segment. What’s more, the objectives listed on the status screen are now fairly specific on tasks and locations, and the game has implemented checkpoints after each sub-objective, which cuts down dramatically on a) the aimless wandering and b) the tedious or frustrating repetition of huge chunks of mission that marred the first game. Best of all, Forbidden Siren 2 even features an easy mode, which ups your protagonists’ health and means that not every encounter with the walking dead is likely to be fatal.

All good stuff, but while the learning curve is no longer so steep, Forbidden Siren 2 still isn’t a game that you immediately warm to – and the reasons remain primarily structural. Load a game, and you’ll see the game’s twisting, interlocking multiple plots have been broken down into a range of shortish missions arranged on a grid by protagonist and by time. Completing a mission may open up a video sequence that furthers the story, a new mission for another character or a new mission for the same character further on down the timeline. With me so far? Well, now things get complicated. First, the missions and clips aren’t always presented in sequential order, which frequently makes it difficult to make head or tail of why character a and character b are in location x trying to find object y and escape to area z. Secondly, just completing missions in order will eventually lead you to a dead end where one protagonist meets an untimely demise and everything grinds to a halt. Ouch. 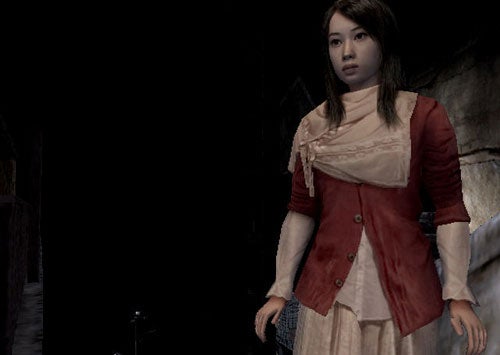 The Siren’s secret is that many of the blocks on the mission grid also contain a secondary mission; essentially a reworking of the first but with different objectives, the completion of which will open up new secondary missions, new missions, or even new protagonists. Completing these secondary missions isn’t – as would be the case in any other game – an option, but a necessity. Finding an item, taking a different exit or even opening a door can set in place a whole chain of events that prevent, for instance, Mamoru Itsuki from facing his original cruel fate. 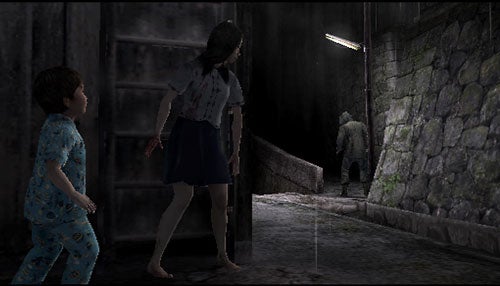 There are a lot of things to like about this non-linear approach. First it turns the game into the equivalent of a vast, narrative jigsaw puzzle where you accumulate the pieces through completing the missions, then try to put the thing together in your head. To this end, the game even throws in plentiful archive material that you can use to fill in the gaps between pieces. Secondly, the use of multiple protagonists encourages a variety of approaches to the missions – you’re a defenceless schoolgirl one minute, a nervous military recruit the next, a careworn cop the one after. You may be skilled and equipped with weapons, or you may be easy meat for the local zombie population, and you always need to adjust your methods accordingly. Certain characters even have their own unique powers. A young clairvoyant can sightjack in the past to gain flashbacks that reveal the locations of key items, while a partially-sighted novelist has to sightjack into the mind of his guide dog then control himself from that viewpoint. All neat stuff.

And at its best, this is an extremely compelling game. The survival-horror meets stealth action makes for one of the tensest games of hide and seek imaginable. Your fragile heroine switches off the torch and ducks behind a counter, sightjacks into the mind of a patrolling shibuto, and all you can do is watch nervously as its vision sweeps your location. Or your feeble clairvoyant, armed only with a tatty umbrella, cowers in the bathroom of a small apartment then sightjacks between the viewpoints of several shibuto scouring the rooms and corridors, hoping that the next door they approach won’t be the one in front of her. At this point, the game delivers that gut-knotting, lip-biting experience that should be at the core of any decent horror game – and it delivers it in spades. And when that red flash kicks and the view abruptly shifts to tell you that your presence has been noted, there’s a genuine rush of fear; there’s a good chance your number may be up. 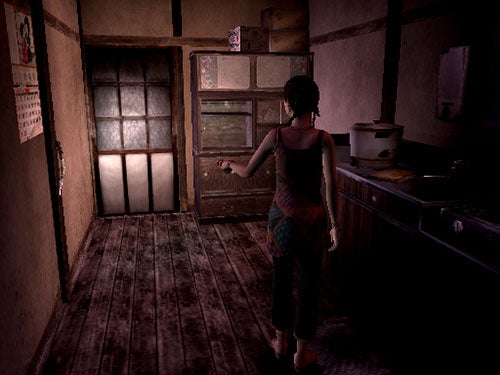 What’s more, there’s no doubting the atmosphere. The visuals can look slightly basic at times, without the same rich detail in the settings that characterised Resident Evil 4 or Project Zero 3, but the characters are superbly rendered and animated, with realistic features and excellent facial animation that conveys a surprising amount of emotion during cut-scenes.


Like Silent Hill, the game transforms mundane locations – the apartment block, the fairground – into authentic nightmare landscapes, filled with the stench of decay. The lighting and weather effects are also surprisingly potent, and the low-key score and sound effects also help establish the gloomy mood. And at least this time you have the option of Japanese dialogue with English subtitles, which means you can avoid the still rather stilted English renderings. 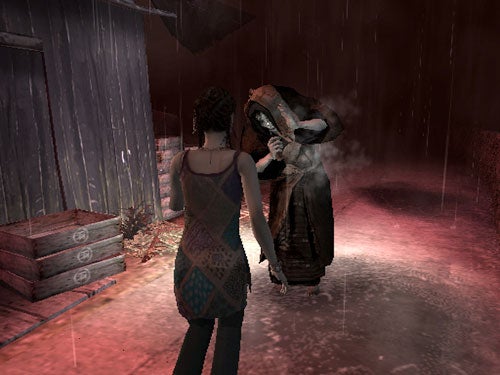 Yet Forbidden Siren 2 can also fall strangely flat. Too many missions feel like dull variations on the theme of ‘get to point X, grab object Y, then leave by exit Z’ and while the clearly set out sub-objectives mean you don’t spend too much time wandering around, they also take much of the element of exploration from the game. Yet they’re necessary, because some objectives seem wilfully obscure.

Certainly, the structure is at fault as well; it makes for a fascinating puzzle, but – combined with the brutality with which Forbidden Siren 2 dispenses with its cast – makes it hard to empathise with the characters. I remember being more scared playing Project Zero 3 or Silent Hill 2 for the simple reason that I’d had more time to engage with the protagonists, and because I had more idea who I was, where I had been and what I was trying to accomplish. The problem with a narrative that you slot together, piece by piece, is that you don’t really know what’s going on until you’re putting the last pieces into place. Basically, you have to put time into Forbidden Siren 2 before you really get much out of it. 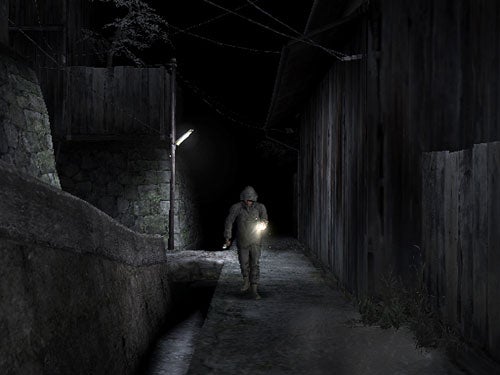 And during that time you will find plenty to annoy you. Using the first-person sniper view to aim is a necessity in the more action-focused missions, so why does the game pop you out of it every time you’re hurt? Also, why can’t you do something to make the murderous shibuto less of a menace. After all, if I was constantly hunted by an axe-wielding zombie who came back for more five minutes after being gunned down, I wouldn’t be above a) hacking vital appendages off or b) at least throwing away the axe. 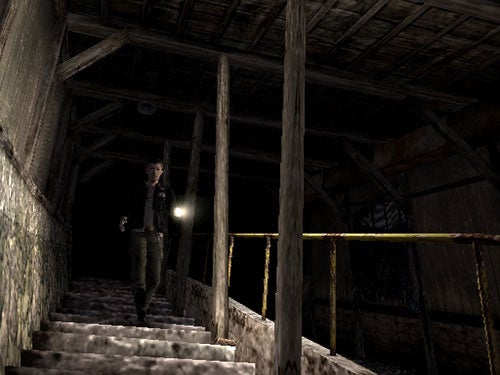 That said, after the first four or so hours, the game exudes a weird charm that keeps you locked in despite its frustrations. As the pieces of the jigsaw start falling into place, you begin to take each clue with a certain degree of satisfaction; to admire the way in which events chain together and new potential outcomes come into being. Last year’s Fahrenheit did similar things in a more organic, less forced way, but that was a fairly short, intense experience that went a bit wild towards the end. This is a more cerebral adventure, and it’s one you could easily puzzle over for weeks. Make no mistake, this is a love it or hate it horror game – and still not up the standards of the best of Silent Hill or Project Zero – but if you love intelligent, otherworldly scares, it’s one you really ought to try.


A unique, genuinely scary Japanese horror experience, but one that still takes a real time investment to get into. You’ll either grow to love it or hate it, but it’s hard to imagine an in-between response.