If you want to make a games journalist squirm, charge them with writing about Team 17 without mentioning Worms. The vast majority simply won’t be able to manage it and, for the few who do, you’ll likely find your eyes glazing over as you read an article devoid of the one fact the should plainly be on the page: Team 17 made Worms.

So, this humble writer isn’t even going to try: Team 17 made Worms and, if that wasn’t enough,  the studio has now released Flockers – a game that, unashamedly, feels like it’s been made by the studio that made Worms. Do you know why that’s so blindingly obvious? Because, if you strip back Worms to the bare essentials and play around with the graphical style and, indeed, the animal that stars as the game’s host, what you have is Worms reborn.

Indeed, you could argue that, so conscious of the fact that Team 17 is so associated Worms – a much celebrated franchise, no less – it’s decided to embrace that fact by pushing out a new franchise that tread much the same path. You might even go as far as to bill Flockers as something of a ‘Worms trainer’, if that didn’t sound like something a vet might prescribe for your dog. 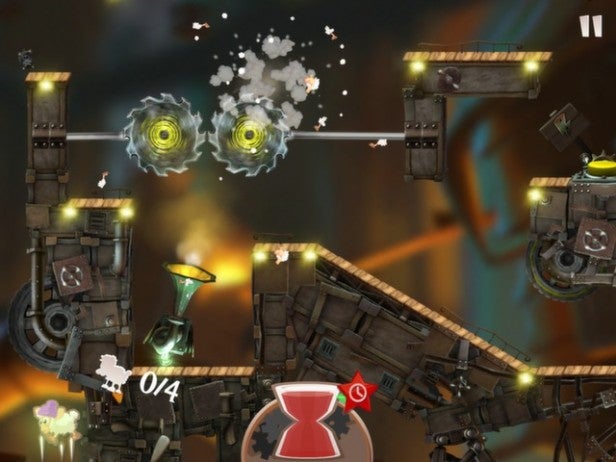 The principles of Flockers are much the same. Played out within a series of 2D stages, you don’t control the game’s stars – a flock of sheep, if the name hadn’t already given that away – but rather the environment they wander about in. And wander about they most definitely do; their base response to everything is simply to plod along quite happily in whatever direction they’re facing. If they hit a wall, they’ll stop and head the other direction, or if they reach the end of a ledge they’ll merrily jump off it – even if it leads them directly to their death.

Your job, therefore, is to manipulate the world around them to guide them to safety – and, as the levels pass, the amount of tools in your arsenal to do so really ramps up. Dropped into the stage via one shoot, the challenge is to get a set number of sheep into a shoot usually on the other side of the screen, with Flockers tolerating the odd loss along the way. Initially your only input is to deploy one or two of the objects in your itinerary at a time – whether that’s giving your sheep wings so they can fly over giant chasms in their path or blocking them so they don’t wander into danger. 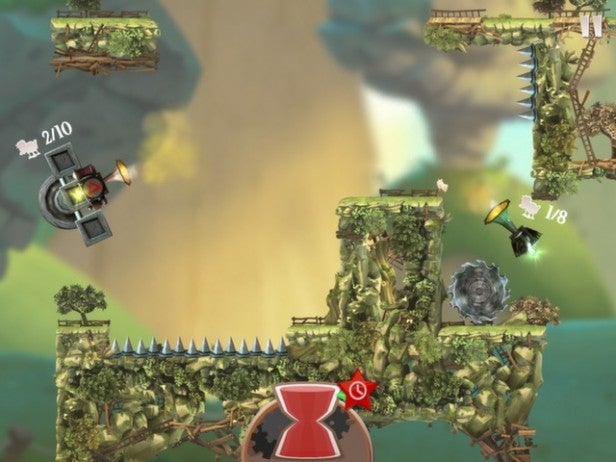 Things soon become more complicated the bigger the levels get and the more weapons you have at your disposal, however, and Flockers becomes a game of trial and error – for example, guiding the sheep over an early gap in the track when, in reality, you need to let them fall down a level first so they don’t end up sliced to smithereens is something you may not grasp on first glance. The design of some of the stages in Flockers often relies on you being able to fight your instincts, though for those who need to see disaster play out before they can rustle up a remedy, the number of problems to overcome in some of the latter stages means there’s plenty of room for trial and error.

It’s fair to say, Flockers is no pushover, and what separates it from Lemmings – where you could quite literally blast your own way to victory – is that there tends to be only one set way to make it through each stage and it’s simply your job to find it. Where Flockers tends to push this model a little too far is when it comes to springing just one too many surprises on you: teleports, for instance, often drop your sheep onto the other side of map almost without warning, while switches triggered by contact with said sheep can set off a whole motion of activities you can’t necessarily predict beforehand. 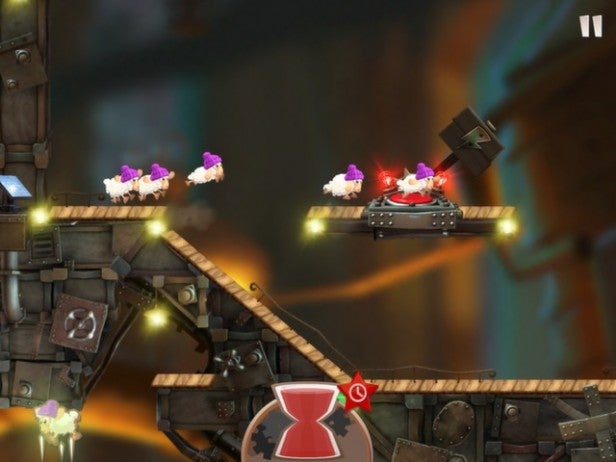 It’s almost as if, in a bid to ramp up the challenge, on occasion Team 17 has made Flockers a touch unfair at times. It’s also visually something of a mess; part steampunk, part warehouse, part I’m not entirely sure what, Flockers feels a bit ramshackle in terms of an overall vision and, despite some sharp effects during play, is not always the most visually appealing of games.

Nevertheless, as an action platformer that’s already made its mark on console, it’s not hard to see why Team 17 has decided to bring it across to Android and iOS. Firmly embracing its heritage, the studio has delivered a more palatable follow up for newcomers that fits perfectly on touchscreen devices and, despite the odd problem, serves as a legitimate welcome to the world created by Worms.

Verdict
Like a stripped back version of Worms, Flockers makes the most of its connections to Team 17’s beloved series to deliver a complicated and occasionally messy action puzzler that sits perfectly on smartphones and tablets.