Cisco’s Flip isn’t the only pocket Internet camcorder around, but its name is virtually synonymous with the concept. Nevertheless, the company isn’t sitting on its laurels. Almost exactly a year since the launch of the first MinoHD, we now have the second incarnation. Aside from being silver, rather than white or black, there are a number of notable enhancements.

The new MinoHD is virtually the same size as the predecessor, although the brushed metal front and marginally more curvy edges make it feel smaller. The infamous flip-out USB plug, which gives all the Flip devices their name, has been redesigned as well. It’s construction is now less fussy and it sits flush with the body. The 2.5mm jack, which provided analogue video and audio connectivity in the original version, has been removed, to be replaced by a mini HDMI port. This will allow you to watch your movies in all their HD digital glory on an HDTV. But no adapter cable is supplied in the box, so you will need to buy one to use this feature. 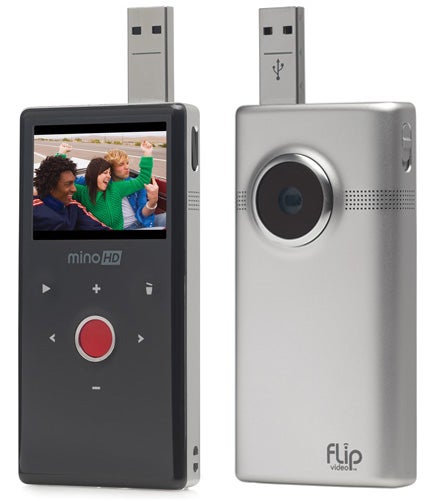 Another change is to the LCD. The original MinoHD had a particularly pokey 1.5in display with a resolution of just 176 x 132 pixels. The second generation ups this considerably to 2in and 320 x 240 pixels respectively, which may not sound like much but makes all the difference. It’s now a lot easier to see the details in your subject matter, making accurate framing easier too. The sound recording abilities have also been upgraded to stereo, where the original MinoHD only offered mono audio.

There are some internal differences, too. The sensor is the same 2.2-megapixel, 1/4.5in CMOS one found in the previous MinoHD, but the image processing that goes with it has been updated to the 3.5 version of the Flip Video Engine. This is the same as is used in the larger UltraHD model, which offered marginally better performance than the first-generation MinoHD in our testing.


The amount of onboard storage has been doubled as well, from 4GB to 8GB. Footage is still recorded at 720p resolution and 30 frames per second, with no other options, so this doubles the duration available to two hours. For most activities, this will be more than adequate, since the battery is rated to last two hours as well. 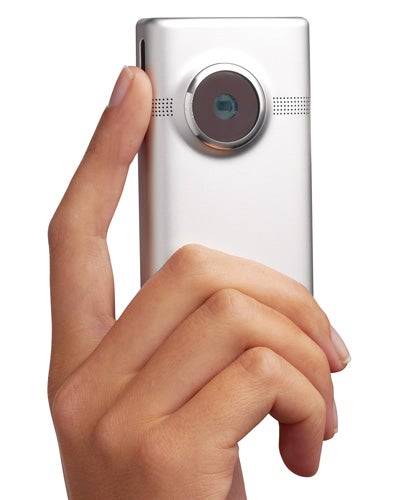 One area that hasn’t changed is the range of camcorder features, or lack thereof. About the only configuration worth mentioning is the digital zoom, and being digital it’s hardly worth mentioning either. However, the minimum focal distance of the fixed lens now goes down to 80cm, so you can record things from a closer proximity than before.


Pocket internet camcorders have regularly surprised us with their low-light shooting abilities, and the MinoHD’s large 1/4.5in CMOS sensor promises similar results. It can still pick up a decent picture in quite poor illumination, and actually outperforms the lower-end of the mainstream HD camcorder market, where models typically use smaller sensors despite offering more features.


Performance in more brightly lit conditions is less of a revelation, however, and here the lack of features is a little more telling. For example, high contrast is not dealt with well, particularly brightly backlit subjects. With no compensation option, a subject shot against a bright background will come out dark, and there will be nothing you can do about it. Similarly, there’s no way of dealing with scenes with an abnormal level of light or dark areas, such as beaches or landscapes.

Of course, shooting video is not the only trick for pocket internet camcorders. They also provide everything you need to put your footage online within the same package. This has traditionally been an area of particular strength for the Flip devices, as they include more than just a basic utility for uploading video to the Web.


The MinoHD second generation hasn’t changed much in this area. The FlipShare application offers almost the same features as before. You can trim the beginning and end points of clips, and then arrange them in order for a simple edit; there are options for adding title and end credits, as well as putting the Flip logo as the finale; and you can add music from either Flip’s small selection or a separate MP3. However, the Muvee-based automatic editing tools found in previous versions of FlipShare have been temporarily removed, but you can reinstate them by installing the free, online version 5 update. 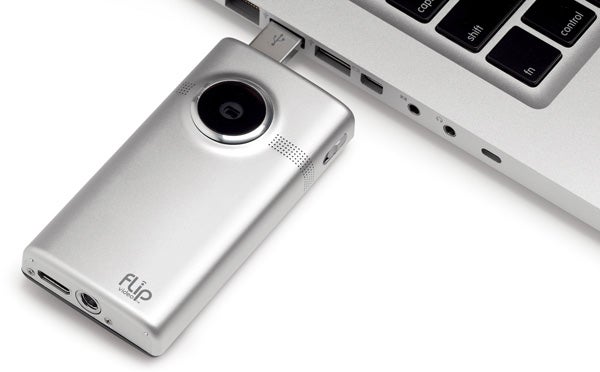 Raw clips or edited movies can be shared in a number of ways. You can email them out, which doesn’t drop a huge video file in your recipients’ inbox, but uploads it to the Web and then sends out a link to the location. Similarly, you can create online video greetings cards and email these out. The video will be embedded in a frame of your choice, with a fairly extensive range of categories available such as Birthdays, Weddings, and Get Well. As with the video email, the card is delivered via the Web, with just a link included in the email notification.


Uploading options include YouTube and MySpace, plus outputting a raw file for uploading to other sites manually. The only new feature here is the Flip My Channel section, which is the company’s own video sharing site. Once you’ve registered your email and created a password, dragging videos to this section converts them and uploads them to the site. You’re then given more sharing options online than via the software, including Twitter and Facebook. You can also email a link, or download the video to a local drive.


So the second outing for the MinoHD is a significant upgrade over the original, even if the core functionality remains the same. Video quality is very slightly better, there’s twice as much storage, it looks more stylish, and the LCD is a big improvement. However, the new model is also currently being sold alongside the old, and the latter can now be found for £50 less. If all you want is something pocket-friendly to capture a few moments, the older model works out much better value.