Obviously it might not be doing the Finlux any favours that it’s hitting our eyeballs so recently after Sony’s ultra high resolution groundbreaker. But fortunately we’ve been doing this TV reviewing malarkey long enough to be able to put our ‘budget goggles’ on whenever required. And actually, in some ways at least, the Finlux 42S7080 isn’t as much of a shock to the system as you might imagine.

The Finlux 42S7080 is no great looker. At a good inch wide its bezel is
chunkier than is fashionable these days, and its colour scheme is a
straightforward black. The only things adding a dash of style are the
glossiness of its finish, and a slight bulge over the inner half of the
bezel. 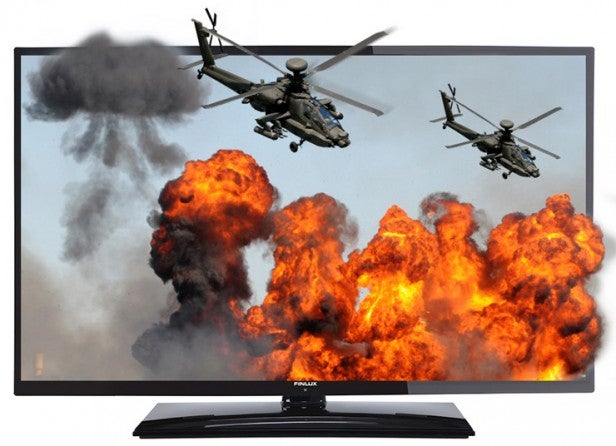 This latter feature is of the passive variety – a fact which has lead to Finlux very generously include no less than eight pairs of 3D glasses free with the TV. In this respect at least, the Finlux 42S7080 actually outguns the Sony KD-84X9005, which rather stingily only provides two pairs.

There is one bit of bad feature news though, namely that the Finlux 42S7080 only has a standard definition Freeview tuner. This does stick in our craw these days, however cheap the 42S7080 might be. Though we guess there will be some people out there willing to sacrifice a Freeview HD tuner in return for being able to get 3D so affordably.

Connections are surprisingly strong, though. Its four HDMIs puts it on a par with 42-inch TVs costing three times as much, while its two USBs are enough to let you record to USB PVR and playback video, and photo files from USB storage devices without having to swap out USBs.

The one significant connection you don’t get is a LAN port (or any built-in Wi-Fi). Which isn’t surprising, really, given that the Finlux 42S7080 doesn’t support either DLNA PC connectivity or any online streaming features.

Accompanying the Finlux 42S7080 is a startlingly large and attractive remote control, complete with a glossy finish and a very pronounced hump in the middle on which are mounted the main navigation arrows and ‘OK’ select button. Despite the size of this remote, though, it’s not especially great to use thanks to a combination of a rather thoughtless layout and the fact that the hump is too severe, making pressing the navigation arrows a bit uncomfortable.

Finlux 42S7080 Features
Heading into the Finlux 42S7080’s amusingly gold-tinted onscreen menus, there are one or two more features than might have been expected at this price point. For instance, there’s a 2D-to-3D conversion system, and a sliding bar for adjusting the perceived depth of the 3D image.

You can also adjust the backlight output between Eco, high and Auto; activate optional noise reduction systems; adjust the aggressiveness of the dynamic contrast system; tweak skin tones in isolation from the rest of the picture’s colours; shift the red/green colour balance; and even adjust the gain of the RGB elements. 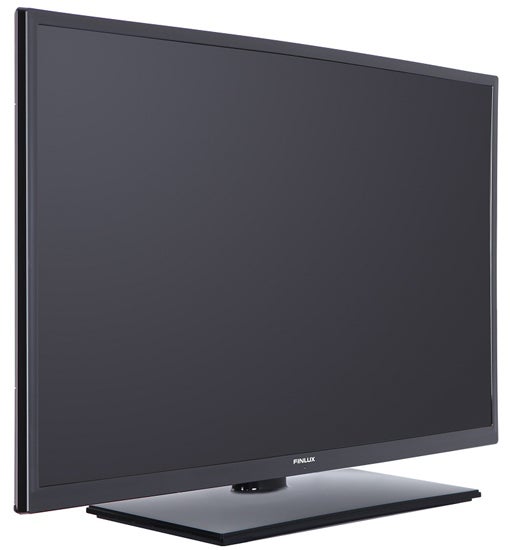 The best images all appear when you’re watching predominantly bright HD material. For instance, the studio footage of Sky News HD, animated classics like Beauty and The Beast or Shrek and any bright scenes in non-animated blockbuster movies all look bright, punchy, richly coloured and really, unexpectedly sharp.

Detail levels are so high with HD, in fact, that they humble those of some considerably more expensive TVs from much bigger brands than Finlux. What’s more, the Finlux 4S7080’s sharpness isn’t blighted nearly as severely as we would have expected by LCD’s blurring issue when dealing with horizontal motion. 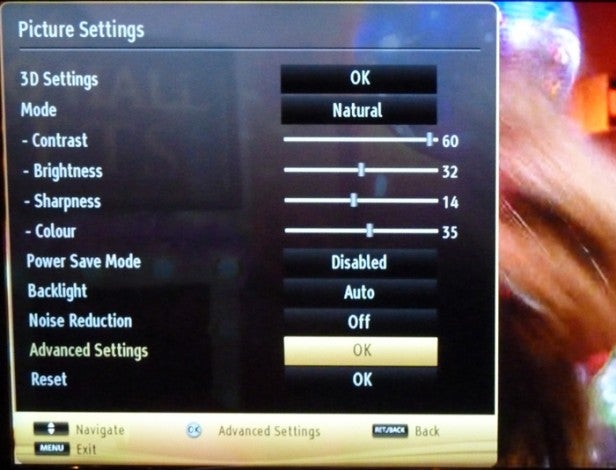 The Finlux 42S7080’s budget nature isn’t completely absent from its handling of bright scenes. Colours, for instance, lack a little subtlety, which can occasionally leave video sources looking a touch cartoonish. Extremely bright areas can ‘white out’ too, resulting in a noticeable loss of image detail. Overall, though, it’s hard to imagine anyone who’s paid so little for a 42-inch 3D TV feeling in any way unhappy while watching the sort of bright material that makes up most of a typical user’s viewing time.

Where the Finlux 42S7080 falls down is with dark scenes. For instance, even with the set’s backlight, brightness, contrast and dynamic contrast settings all tweaked to deliver the best all-round results, many dark scenes wear a distinct grey overtone where the image should look black. As well as looking quite unnatural in itself, this greyness can hide shadow detail in dark parts of the picture, and make some colour tones during dark scenes appear slightly unnatural.

The Finlux 42S7080‘s dynamic contrast system is problematic too, as it’s just too slow and over-aggressive. This means that you’re regularly distracted by the brightness adjustments it makes in its bid to deliver the best black levels it can, based on an ongoing assessment of the incoming images.

This isn’t to say that the Finlux 42S7080 is by any means an unmitigated disaster with dark footage, though. For instance, its backlighting does at least look pretty even, without the ugly patches of extra-brightness clouding still common with cheap – and actually a few not so cheap – edge LED TVs. Also, the greyness is much less pronounced if there’s a bit of ambient light in your room, so it might only prove seriously troubling to dedicated movie fans who like to turn the lights off before tucking into a good film. 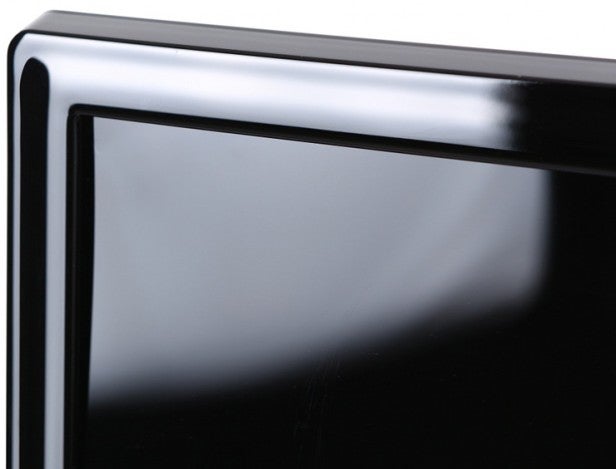 Finlux 42S7080 3D
Shifting our focus to the Finlux 42S7080’s passive 3D capabilities, they’re far more enjoyable than expected. Some budget passive 3D TVs have ended up looking pretty darned ugly thanks to their problems with colour tones, motion and even crosstalk (despite this not generally being associated with the passive system). But the 42S7080 generally delivers all the strengths of passive tech without over-stressing the flaws.

This means, in essence, that you get to enjoy a flicker- and largely crosstalk-free 3D image with a natural sense of depth and more brightness and colour saturation than you get with the vast majority of active 3D sets. We were also impressed by how well the set handles motion in 3D mode, avoiding the overt juddering often seen with 3D footage even on some much more expensive TVs.

On the downside, you can make out a little horizontal line structure over bright areas and small bright objects, and contoured edges look jagged. Plus there’s less fine detail in the Finlux 42S7080‘s 3D images than you would see with an active 3D TV, and crosstalk goes from zero to massive if you sit more than 13 degrees above or below the screen.

These are all flaws of the passive 3D technology generally, though, and so can’t be laid at the door specifically of the Finlux 42S7080. The only 3D issue that you can blame Finlux TV for, in fact, is the way the image’s lack of contrast can reduce the sense of depth during dark scenes. 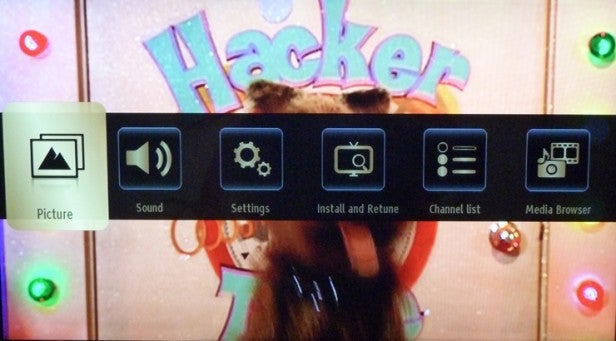 One much more aggravating issue with the Finlux 42S7080’s performance that it can’t escape responsibility for, though, is the amount of input lag it suffers. Even using its Game preset and turning off every bit of video processing we could find, we still couldn’t get input lag lower than 100ms. This is plenty high enough to significantly reduce your gaming performance.

The audio the Finlux 42S7080 provides with its more than presentable pictures is more in line with the budget TV world. The mid-range is quite compressed, with minimal bass or treble extension and a tendency to sound thin and muffled when there’s anything more dramatic going on than your typical daytime TV chat show.

Finlux 42S7080 Verdict
Although its audio and black level deficiencies don’t make the Finlux 42S7080 a particularly great option for serious movie fans, for more casual users it’s much better than most budget 40 and 42-inch TVs. Even the 42S7080’s 3D efforts are more than respectable, making the fact that as many as eight people can enjoy them right out of the box a real bonus.

In the end the lack of a Freeview HD tuner, large input lag figure and weedy sound have persuaded us to go for a final mark of seven rather than anything higher. But if you can easily get an external HD source into the TV, you aren’t a serious gamer and money’s tight, then the Finlux 42S7080 definitely merits consideration.