As we’ve espoused many times before, performance keyboards aren’t just for gaming nuts and they don’t have to be covered in silly gimmicks like flashing lights, and LCD screens. If you just want a hard-working tool that will make you type faster and more accurately and will stand the test of time then you’ll be wanting something like the Filco Majestouch keyboard.

Like the Steel Series 7G gaming keyboard we looked at recently, the Majestouch range is all about having a simple functional design but building it from the best quality components. So instead of the flimsy rubber membrane switches (that wear out quickly and offer poor responsiveness and feedback) used on most conventional keyboards, the Majestouch range use individual mechanical switches for each key. In particular, they’re the renowned MX switches made by Cherry. 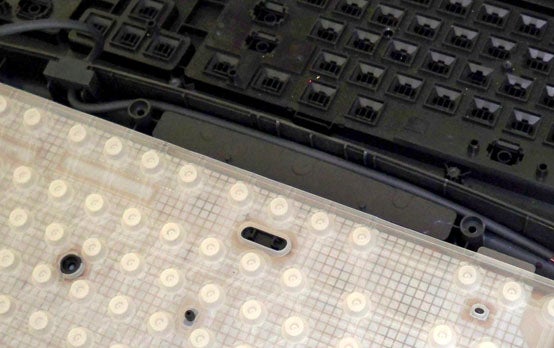 ”’(centre)Most keyboards use conductive contacts mounted on rubber membranes for their switch mechanism.(/centre)”’

These switches are rated to last up to 50 million keystrokes and thanks to sturdy slide mechanisms they will operate even if you approach the key at an acute angle – many normal keys jam if you don’t press them directly down. They’re available in three different types; linear (black), soft tactile (brown), and click tactile (blue). As you’d expect the click tactile gives a response just like your classic clicky keyboards of old, while the soft tactile has a similar feeling whereby the key has a light initial resistance but then ‘breaks’ after you’ve pressed it a couple of millimetres. The linear, meanwhile, is the key used on the Steel Series 7G and it has a firmer overall action but without the break, for it’s full 4mm of travel you get the same resistance. The switch triggers when you’ve pressed the key about half way down.


To correspond with this choice of key switches, Filco/Diatec, the Japanese keyboard manufacturer has created three otherwise identical keyboards all under the same general banner of Majestouch. The FKBN105M/UKB we’re looking at today uses the soft tactile switch while the FKBN105MC/UKB uses the click tactile switch, and the FKBN105ML/UKB uses the linear switch. Other variations are available including ‘tenkeyless’ designs (referring to the lack of a number pad) and ones with non-UK layouts, all of which are available at the Keyboard Company, who has exclusive distribution rights here in the UK.

Getting onto the keyboard itself then, it’s based on a completely conventional UK keyboard layout. So you get a full-size Enter key, large Right Shift key, and everything else where you’d expect. What you don’t get, however, is any sort of multimedia shortcuts – even as secondary functions of the F keys – or even a simple volume control. Neither do you get audio pass-through cables or USB extension ports. This is a keyboard only.


Simple it may be, but the Majestouch makes up for this with incredible build quality. It’s built entirely on a steel chassis and finished in thick layers of textured plastic. The result is a keyboard that could probably stop bullets and certainly doesn’t know the meaning of the word ‘flex’. One consequence of this is it weighs a hefty 1.2kg but, along with four sizeable rubber pads on the bottom, it means the keyboard certainly won’t start shifting around your desk as you type.

Three blue LEDs sit above the numpad section to indicate Num, Caps, and Scroll lock status and for some reason Filco has chosen to use incredibly bright ones. It’s not a problem when sat normally – unless you’re sitting watching a movie, in which case it’s distracting – but if you happen to glance at it when viewed straight on you can look forward to a nice yellow dot in your vision for the next few minutes. 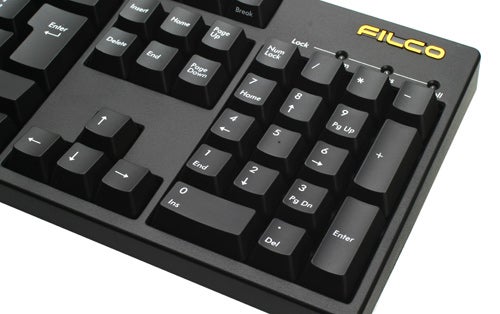 Snubbing the current trend to have braided cables on keyboards and mice – apparently to prevent tangling – the Majestouch range have as plain plastic coated cable that’s 1.5m in length and terminates in a USB connector. A USB-to-PS2 converter is included in the box.


As well as offering a high-quality typing action the FKBN105M/UKB should satisfy gamers to some degree thanks to its N-key rollover function. This lets you press any number of keys on the keyboard at once. So, if you want to jump, dock, strafe, move forward, roll, and fire all at the same time, you shouldn’t have any problems with this keyboard. It’s also useful for fast typers as you can always guarantee accurate response, no matter how fast you go.

In use the Filco Majestouch FKBN105M/UKB certainly makes for a stellar typing tool. Its light yet positive keys mean you can type with a nice light action, which is easier on the fingers, yet lose none of your speed and accuracy. In comparison, most conventional rubber membrane keyboards feel slow, stiff and stodgy. You probably won’t see any benefit when gaming but if you spend most of your working day bashing out words then you’ll immediately appreciate it.


The only downside is the lack of ergonomic shaping like that on Microsoft Natural keyboards or the Logitech Wave. This means your hands are held in a more constrained position, which could lead to earlier onset of RSI problems. Neither is there a palm rest of any description. On the flip side to this argument, the lighter action on the Filco arguably has more benefit in reducing RSI, since it puts so much less strain on your fingers.

So, it’s clear the Filco Majestouch performs, but it does have one Achilles heel: its price. At £95 excluding VAT and £111.63 including, it’s a seriously expensive keyboard. More so even than the Steel Series 7G, which offers essentially identical quality and adds in a few multimedia keys, audio pass-through, and a USB hub. The 7G, however, did suffer from having a peculiar key arrangement so certainly wasn’t perfect. In this regard, the Filco is the clear choice for a pure typing-performance keyboard.


The Filco Majestouch FKBN105M/UKB certainly isn’t going to replace the feature-rich gaming keyboards out there and its high price will put off many others. However, it you’re looking for a superbly well-built, hard-wearing keyboard that provides an excellent typing experience then look no further.