Easily the most enduring rivalry in video games is that between EA’s FIFA series and the much-loved underdog, Pro Evolution Soccer (PES) from Konami. FIFA, the Chelsea or Man City of our story, has always boasted all the things that ought to deliver the authentic experience: the real names, the stadia, the competitions and so forth. Yet, throughout the PS1 and PS2 years, the likes of Ryan Greggs, Ruud Von Mesteroum and Merseyside Red ran rings round FIFA’s licensed gimmick-fest. 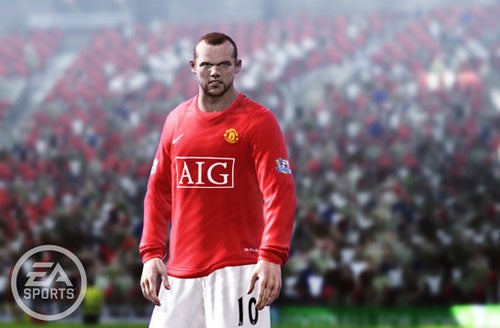 When the current generation of consoles arrived, however, the worm began to turn. After the truly, utterly, terrible FIFA 06: Road to FIFA World World Cup, EA got its act together. FIFA 08 was probably the beginning of things to come. Though it didn’t quite best PES 2008, it showed that EA was going in the right direction and had finally produced a brand of football game purists could enjoy. FIFA 09 built on this success quite dramatically, adding speed and fluency and ultimately usurping the good football crown so beloved of PES. FIFA has always been slicker, more polished and (recently at least) less buggy, so the transformation was complete. The king is dead, long live the new king.


Now we have FIFA 10, which aims to ram home its advantage over PES. I’ll save you any further preamble and tell you now: it does, quite emphatically in fact. While there are numerous reasons why this particular FIFA is better than the last, its strength lies in the physics engine that was introduced in FIFA 08. Back when PES was dominant it was the excellent physics that made it great, everything else flowed from that. So it is with FIFA 10. 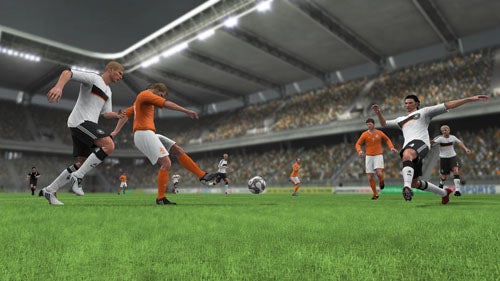 Where, comparatively, PES has become increasingly pinball-like, FIFA has weight and substance. Players grapple with each other realistically, running aside each other, manoeuvring their weight to try and dispossess or maintain possession. And, while the stronger typically prevail eventually, smaller, lighter players aren’t brushed away quite so unceremoniously. Indeed, Wayne Rooney, a powerful but not especially large player, often uses his lower centre of gravity to his advantage. Only the real heavyweights can brush aside opponents with unerring ease. Ball dynamics, meanwhile, are uncanny in their realism.


All of these qualities have been fine tuned and improved in FIFA 10, but it’s the introduction of 360-degree dribbling – a first according to EA – that sets it apart from last year’s release. It’s a fairly self-explanatory addition and its effects are subtle, but then the best things often are. Despite having analogue controls for eons, movement in football games has still been diagonal in nature. In FIFA 10 the degrees are much finer, giving you the precise control people have craved for years. This is best illustrated when playing on the wings, where it’s now a lot easier to run very close to the line rather than hopelessly sprint into touch. 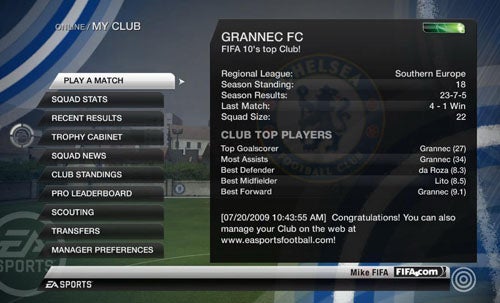 Elsewhere on the pitch this newfound precision simply makes playing the game more enjoyable. You can sneak through gaps and find angles you have wouldn’t previously, while skill moves and dribbling past opponents is given a new lease of life with the Skilled Dribbling trait. Only available with the most skilful players, pulling on both left and right triggers activates extremely fast, accurate dribbling to pass your opponents more easily and without resorting to sometimes unreliable skill moves.

Naturally, being FIFA, this is one stunning looking game, too. It starts with the prosaic things like the menus, which are presented beautifully. Navigating the multitude of new game mode is exceptionally easy, with new features and modes helpfully labelled as such, just in case you thought EA just updated the data and kicked it out of the door. If one were being hyper-critical then this year’s library of licensed music isn’t as good as last year’s, but that’s a matter of taste anyway. 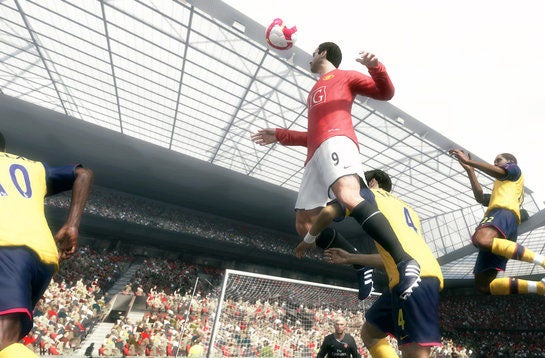 As for the in-game engine, it’s as slick, smooth and detailed as ever – just a little bit better. Player likelinesses are excellent, while player animations continue to improve, particularly where ball control and general agility is concerned. Some excellent lighting effects give night and evening games a great sense of realism, as do the stadiums. Add in a smooth as silk frame rate and it becomes very hard to fault the presentation on any level.


FIFA puts in a fine sonic performance, too. I thoroughly enjoyed the surround sound presentation using the Sharkoon X-Tatic Digital headset, particularly the occasional shout of “man on” emanating from the sidelines. Martin Tyler and Andy Gray return for the commentary, which for the most part is very good indeed. Very rarely does it fall behind the action and every now and again, when Tyler makes a mistake, he’ll correct himself. Sooner or later you will have heard their whole repertoire, but it’s about as good as commentary on a football game has even been. 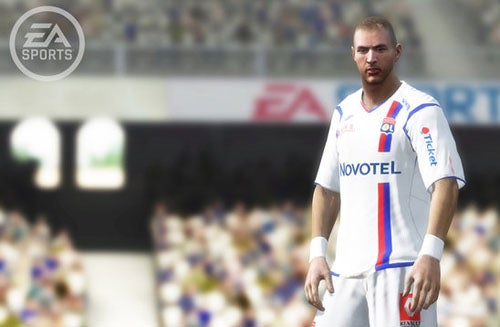 It’s not all great, though, since this time around Tyler and Gray have been given licence to ad lib a little. Sometimes these off-the-cuff discussions work quite well, particularly when in reference to specific players. But there are some real clangers, such as how people in Manchester “really value clichés” (or something to that effect), which are just bemusing. Oh, one other weird thing: Tyler pronounces “Phil Neville” with a sort of reverence totally unbecoming Neville’s stature. It’s very creepy.


When you’re not in a match, enjoying or not enjoying (as the case may be) Tyler and Gray’s wittering, there’s a good chance you’ll be in the Arena, practicing your skill moves and generally larking about. It’s one of the areas that’s seen new additions, in particular a new set-piece creation tool. This is an interesting idea, allowing you to create intricate routines for free-kicks and corners. Unfortunately you have to create routines for specific areas of the pitch, so unless you’re patient enough to create something for all the likely places on the pitch you could have a free-kick, its use will be somewhat sporadic. Hardcore devotees might find some mileage here, particularly if they’ve exhausted all other options available to them, but ultimately there are far more interesting developments elsewhere.

Those more interesting developments include the new Virtual Pro feature. This is, in essence, Be A Pro (which still exists), but released beyond the confines of Be A Pro: Seasons and given far more depth. Your Pro, who can also have your own likeness through a neat picture Game Face upload system on FIFA 10’s website, can feature in any match in any part of the game, including online. And, though you assign your player to a club when you create him, you can take him to whichever club you’re playing with in each game mode. 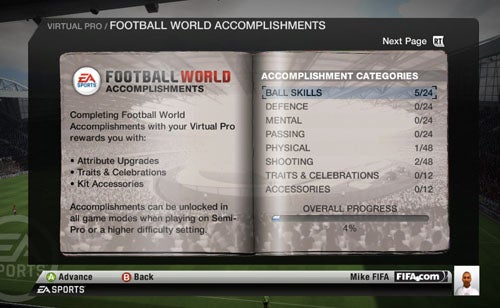 EA has also done away with the old collect and distribute points approach to player development, introducing Accomplishments instead. Accomplishments comprise numerous small deeds, such as scoring with your weak foot, scoring in consecutive games or keeping clean sheets, each of which have a reward for the corresponding skill. Accomplishments are split into categories in the same manner as player stats and the variety is quite impressive.


Initially I wondered whether this system would develop attributes fast enough, but in fact it’s perfectly balanced. It’s particularly effective because a player’s physical development is governed first by the physical attributes of your player – a tall player will be slower and better at jumping, a small one faster and more skilful – but also on how many games you’ve played and the number of man of the match awards. As such, unlike before, you can’t just pour points into the acceleration and sprint speed attributes for an easy advantage. It forces you to seriously develop your player and also encourages experimentation, since many of the accomplishments can be tricky and some are even secret. 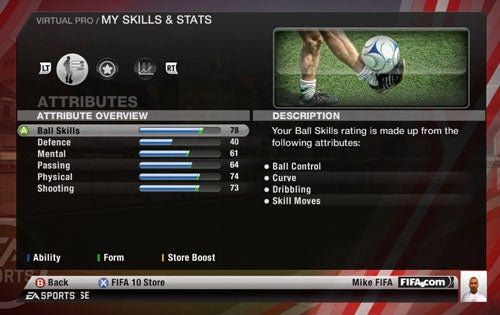 This new system helps enhance the Be A Pro: Seasons mode, as well, which despite being very fun still feels as though it has potential to be unlocked. Hopefully in FIFA 11 it will receive a little more attention.


Instead it’s the Manager Mode that has seen most of the development. EA has improved the transfer system, making it more realistic and essentially more difficult, while also eliminating some of the more ridiculous transfers that used to occur. Player fatigue is also better managed, while an Assistant Manager mode can take over the intricacies if you just want to get on and play. It’s still no Football Manager, it shouldn’t be anyway, but if you’re intent on taking your team from the depths of the league to the Premiership, the Manager Mode does the job well. 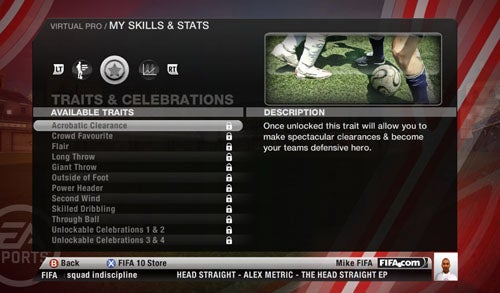 This improved Manager Mode is joined by the well tested and unchanged online modes and Live Season (no longer sponsored by Adidas) to complete a truly daunting package. There are still plenty of little things that could be improved, but FIFA 10 sets a standard as peerless as PS2-era PES, making it comfortably the best FIFA ever and more than likely the best football game ever made, too.


FIFA 09 already had a very robust game engine and a great selection of game modes and FIFA 10 builds very well on its success. 360-dribbling is the standout new feature, but Virtual Pro runs it very close and the improved Manager Mode is no less welcome. Konami has some work to do, because FIFA just got even better.