In a world where so many games are predictable, one of the great pleasures of playing Fez is that – much of the time – you won’t have a clue what’s going on. Sure, we can describe it as a 2D puzzle platformer with a clever 3D twist, or we can talk about its 8-bit bitmap art style and its retro appeal, but none of it will really prepare you for how strange, wonderful and exciting it is to actually play. In a way, it’s Xbox Live’s answer to PSN’s Journey: an inspired slice of arthouse gaming that’s like nothing else you’ve played before. 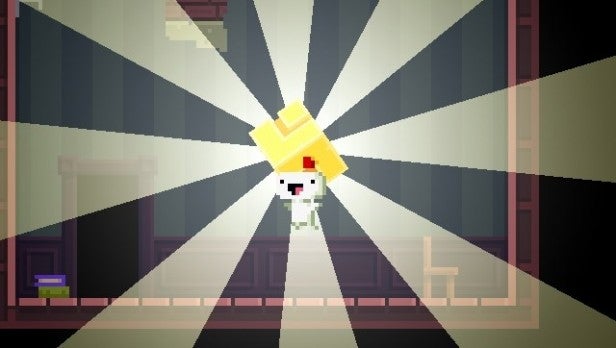 2D retro, 3D spin
Imagine the sort of weird 2D platform world we used to see in games on the ZX Spectrum or Commodore 64. This particular example is the home of a cute bear-like creature, who goes by the name of Gomez. One day, Gomez’s world is shaken by the arrival of a strange 3D cube, which gives his peaceful 2D home a sinister third dimension.

Luckily, fate is at hand, with a strange force delivering Gomez the titular red hat plus the power to manipulate dimensions. With such power, of course, comes a quest. In this case Gomez must collect 32 cubes from across the game’s different levels, so that he can unlock doors and open new areas. 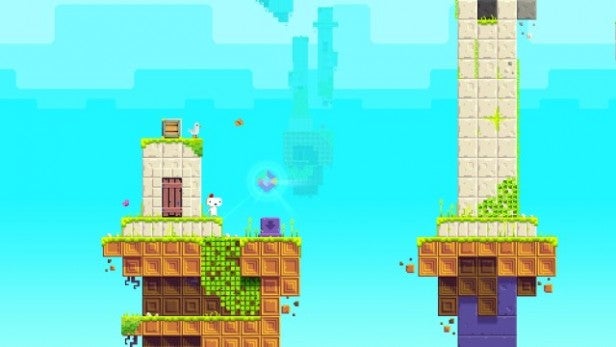 As an old-school platform hero, Gomez has a fairly limited range of skills. He can jump, grab onto ledges and climb up and down specific surfaces, but that’s pretty much it. With his new fez in place, however, he can switch from one dimension to another.

It’s hard to explain, but imagine an old-fashioned 2D level  transformed from a 2D screen into a 3D cube. As a 2D hero, Gomez can only navigate in two dimensions, but by clicking the left and right bumpers or triggers, you can spin the cube through 360 degrees while Gomez stands in place. Suddenly, platforms that seemed miles apart turn out to be contiguous, and doors which appeared out of reach are only a footstep away. The concept takes a little getting used to, but it’s the basis of an exceptional game. 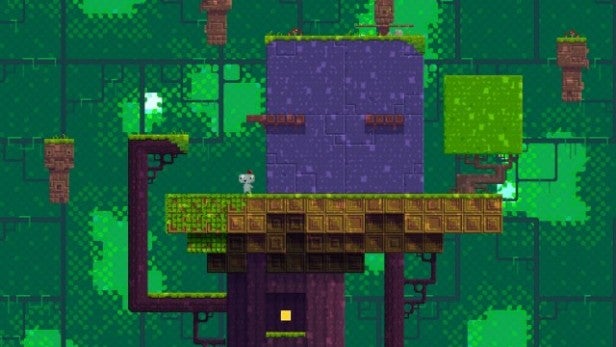 Stretching your brain
Fez isn’t out to challenge your platforming skills or your reactions. There are no monsters to battle, and even falling to your doom is just a temporary setback. Instead, it’s all about the puzzles. How do you get from A to B? How can you find the way upwards? And as the game goes on, it throws in new wrinkles and mechanics to keep those brain cells busy.

First you’re working with bombs and fragile chunks of scenery, then you’re using wheels to rotate specific portions or nuts and bolts to move onwards and upwards. Fez can be challenging, but only because your ideas are heading in the wrong direction. For every ten minutes spent struggling with an objective, there’s a quick forehead-slapping as you realise the solution was so much more obvious than you might have thought.

Vintage Style
Fez’s whip-smart game mechanics count for a lot, but its other great strength is its sheer retro charm. During the game’s prolonged five-year development, 2D bitmap graphics have become an indie-gaming cliché, but here they’re not used to look cool or jump on a trendy bandwagon, but because this is a game informed and inspired by a love of vintage classics.

The regular references to Mario and Zelda aren’t there to earn cheap points with thirty/forty-something nostalgia addicts, but because Fez has its roots planted in the same creative soil. It’s also worth mentioning the awesome electronica and post-rock score, which gives Fez a strange emotional resonance that it otherwise wouldn’t have. 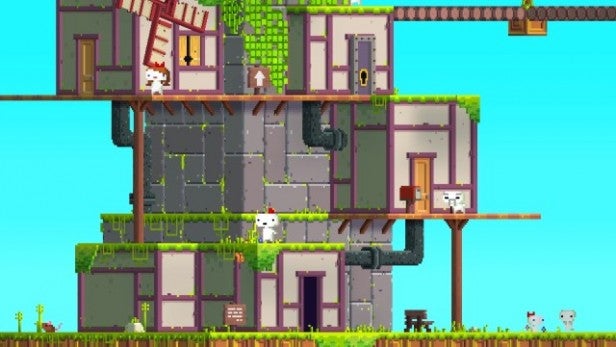 And there’s more going on here than meets the eye. Fez is not linear, giving you a degree of freedom to explore every doorway and move from area to area at will. For a while you can simply explore, but as the game moves on you’ll need to carefully consult the game’s world map to work out where you’ve collected every cube, and where there are still secrets remaining to uncover.

At this point, Fez gets really clever, with hidden areas and new mechanisms that have you working that much harder than before. It’s also not long before you’re introduced to anti-cubes, the more sneakily hidden collectibles that you’ll need to unlock the true ending of the game.

In the meantime, the game is richer than it might appear in background detail. Who are these weird critters? What language are they speaking? Where do the owls come in? Fez turns out to be a whole lot of mysteries wrapped in one giant enigma, and it’s one that will take you many hours to properly unravel.

Out of the Arthouse
Of course, it’s not without precursors. Jonathan Blow’s Braid is the obvious touchstone, and it’s not hard to see parallels with Superbrother’s Sword and Sworcery EP in the visual style and retro ambiance. Fez isn’t quite as intellectual or as brilliant as Braid, but it’s also less aggressive in its artiness, less inclined to clobber you over the head with its would-be genius.

And while Fez comes from the same place as Sword and Sworcery, it trades smug self-awareness for richer gameplay and a lot more fun. Even if you have never played an 8-bit classic in your life, even if the Zelda-esque tones that arise when you find a key in a treasure chest means nothing to you, you will still find Fez a fantastic piece of work. 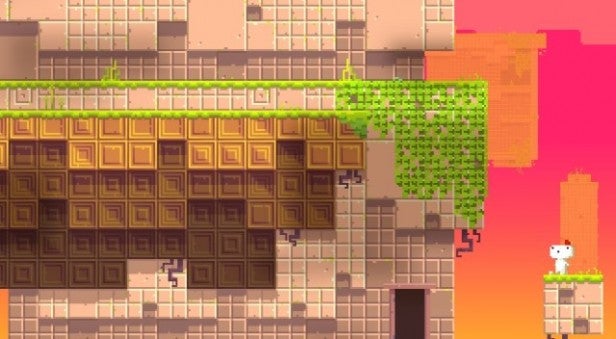 That doesn’t mean it’s beyond criticism altogether. The downside of Fez’s work-it-out-for-yourself dynamic is that there are times when you’ll lose focus and struggle to work out where to go next. The world-map helps, but it’s not always easy to navigate and comprehend.

There were also a few occasions when we entered an area once but didn’t explore it, and when we returned fatal ‘black holes’ had appeared to block our way to an objective. Presumably these should only have appeared after we’d collected the necessary blocks, and the only way to remove them was to exit the game and restart it. It’s not a major issue, but the game’s puzzles are challenging enough without such unwanted complications. Still, these are relatively minor issues. Fez is every bit a must-have game.

Verdict
A lovable chunk of arthouse gaming that puts the game before the art. While Fez is hardly alone in taking inspiration from an 8-bit golden age, it’s one of the few titles to match the titles it pays homage to, with a brilliant mix of vintage style, intelligent gameplay and some slick modern twists. An essential Xbox Live Arcade download for anyone with a passion for games.