What is Exploding Kittens?

Aficionados of the internet’s weirder side are likely to already be familiar with the long-running Oatmeal webcomic. Exploding Kittens is the new card game from the comic’s masterminds, featuring the same distinctive artwork and warped humour that its fans have come to expect.

Having successfully raised $8.7 million on Kickstarter during its development, expectations were definitely high for this game. But does the end result actually justify all that anticipation?

You’re probably already thinking that this is just a Cards Against Humanity clone, but fortunately Exploding Kittens offers a totally different experience to that perennial ‘grown up’ party favourite.

While fast gameplay, sick jokes, and easy-to-learn rules are definitely the order of the day, there’s a surprising element of skill required here that should appeal to both serious and casual gamers.

Rather than attempting to prove themselves the superior edgelord, players take turns drawing cards from the deck. Whenever a player draws one of the titular exploding kittens, they are eliminated. Players are able to stall for time via the various effects of the other cards in the deck, allowing them to take cards from other players’ hands, check the next cards in the deck, or hold off an explosion.

Victory therefore depends on skillful application of each card’s capabilities, and successfully out-bluffing the other players, in order to force them to explode first. 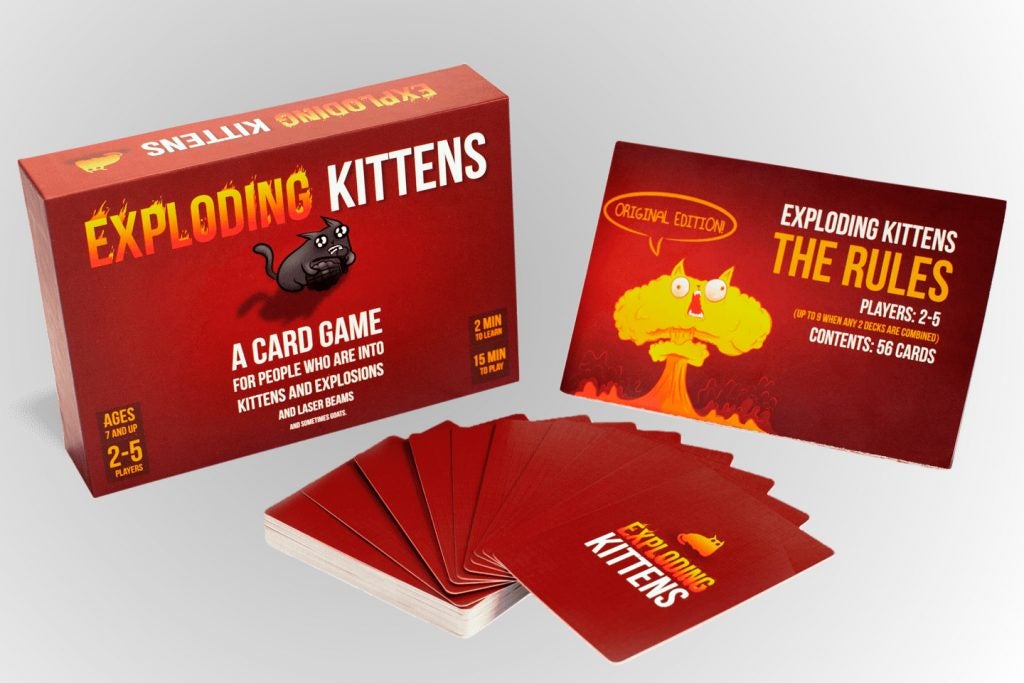 Exploding Kittens – What do you get?

If you opt for the original box, you get everything you need to play straight away, in a neat and tidy 2.5”x3.5” box: 56 cards and the instruction sheet (hey, it’s a card game, not Arkham Horror!).

On the other hand, the ‘First Edition’ offers the same core components in a slightly more luxurious box that meows when it opens (seriously) and offers space for additional cards and sleeved decks. Whether that’s worth an extra £10 is your call.

However, for the same price, you can get the NSFW edition, with cards allegedly too horrible for the core game. This costs the same as the original game (£19.99), and can be played either on its own, or combined to allow more players to join in.

The £14.99 Imploding Kittens expansion is available for this purpose, and adds 20 new cards, although speaking from a purely personal point of view, paying for a card expansion that costs almost as much as the core game leaves a slightly bad taste in the mouth.

The cards themselves are made of sturdy-feeling glossy material, and the artwork is bright and detailed. They shuffled smoothly right out of the box, although if you’re planning on playing regularly, sleeves may be a good investment to protect the cards in the long term.

That’s no criticism of the product, just something that needs to be considered for any card-based game that’s likely to see regular use.

Exploding Kittens – How fun is it?

In my personal experience, the best party games are the ones that are quick to learn (essential at any occasion where games and booze are both going to be involved!), but still offer plenty of challenges to keep both new and experienced players entertained.

In keeping with that spirit, the basic mechanics for Exploding Kittens are extremely simple to learn. In fact, the instructions only take up two sides of paper!

The turn sequence and the effects of the various cards are explained clearly, so getting the hang of the turn sequence won’t take too long. Testing it out with three players, it only took one pass round the table before we were all comfortable with the mechanics and could concentrate on winning.

So that’s the easy part. The most enjoyable part of Exploding Kittens is how involved the gameplay becomes once players get the hang of utilising each card’s special effect to its fullest effect and successfully bluffing their way towards getting the other players to explode.

This is definitely a game that rewards patience, concentration, and a good poker face. In fact, as different as the two games may appear at first glance, fans of The Resistance will find much to enjoy here, as many of the same skills will be required to achieve victory.

Some of the names and artwork for the cards also generated multiple laugh-out-loud moments during our test rounds. While the game’s makers insist the original game is suitable for players aged 7+, more sensitive souls may find this sort of gross-out humour slightly off-putting (this probably isn’t one to break out with the grandparents at Xmas, for example).

Nonetheless, fans of The Oatmeal and those of a more twisted disposition are sure to love it. Zombie Cat and Spay Neuter are both especially adorable…

One slight complaint is that the five-player limit may be an issue for some who like to host games at the larger social gatherings where party games like this tend to be best received. While the game’s player limit can be increased via the various expansions (as touched on above) this will mean additional purchases. 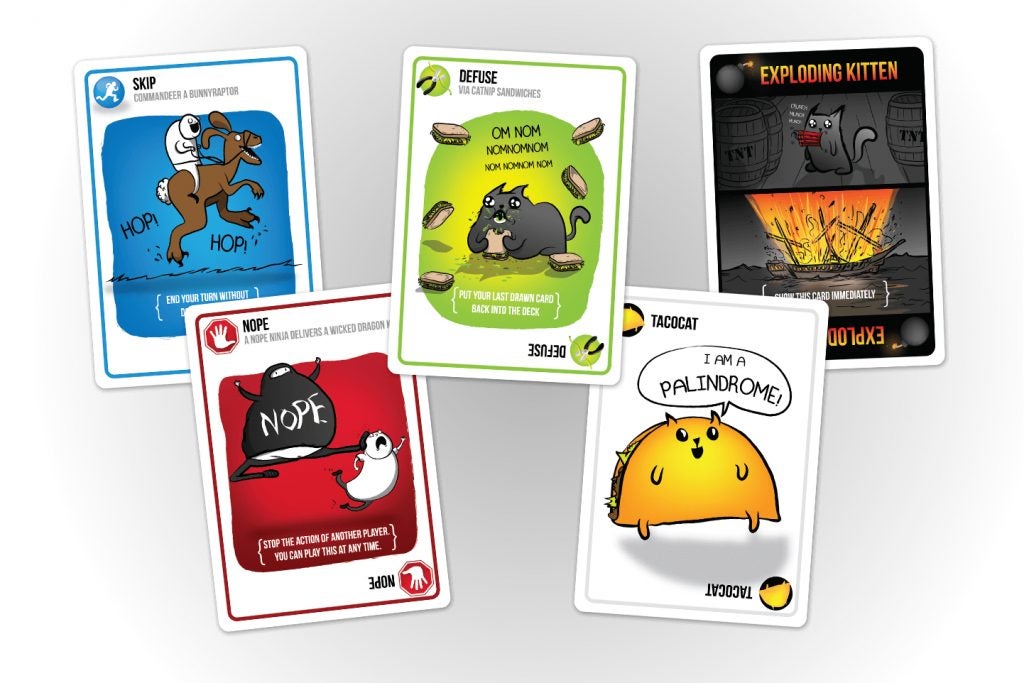 Exploding Kittens is a fine addition to the growing selection of party-style games for (ahem) grown ups. The original game alone offers a lot of replay value, especially after a few passes through it so all the players get a feel for the flow of play.

The styling may not be for everyone, but if you’re looking for a quick, fun game, this one comes highly recommended.

A quirky, fun party game that offers surprising depth and replay value once you get the hang of it.