Windows Vista is finally here and, whichever way you look at it, it’s going to become the standard operating system for the majority of the computer buying public over the next few years, whether they like it or not. Why? Because most people don’t buy computers in dribs and drabs, they get the whole lot all at once with an operating system included and, soon enough, most systems will come with Vista preinstalled. And, right on time, Evesham has provided us with a sample of its first Vista system. 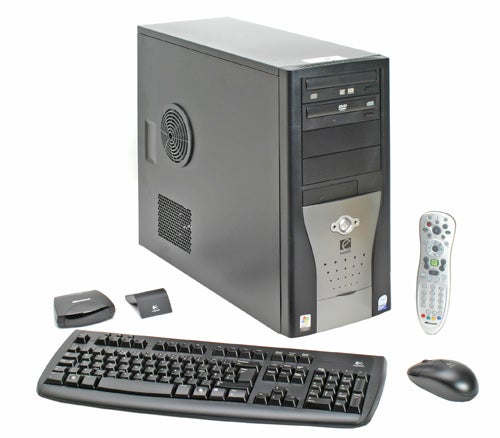 The Solar Storm 731 is a mid-range desktop PC that looks to be a jack of all trades but master of none. Equipped with a 2.3GHz Core 2 Duo, a 320GB hard drive, dual DVB TV tuner card, nVidia GeForce 7900 GS and monitor, keyboard, mouse and speakers, this is a perfect system for a student or an all-in-one PC for the family. Coming in at £999 it won’t break the bank either.


It ships with Vista Home Premium which, as you may have guessed from the inclusion of a TV card, includes Media Center as well as the new Aero interface and all the other goodies that Jon talks about in his full Vista review.


Will this modest system choke on Vista’s bloat or will they be a multimedia match made in heaven? Let’s find out…


The PC case itself is nothing outstanding and if anything looks a little dated, but it is quite sturdy and is bland enough to not cause offence. However, compared to the sleek look of the Aero interface it is a little disappointing.


On the front of the case there are two USB ports, a Firewire port, and microphone and headphone sockets all hidden behind a flap at the bottom. As always, whether you have your PC on your desk or under your desk will determine whether these ports are convenient for you. Personally, I keep my computer tucked away under my desk so would prefer to see these ports near the top of the case. 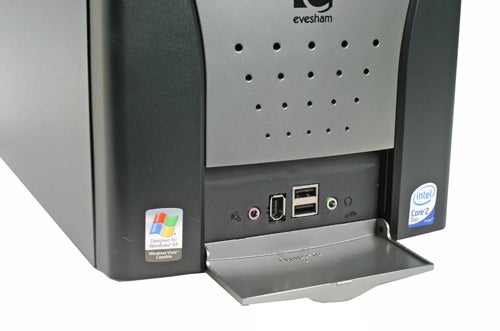 As Vista now natively supports USB memory sticks for installing drivers the sole remaining use of the floppy disk has been eliminated so, accordingly, Evesham has opted not to include a floppy drive. Unfortunately it hasn’t added a multi-card reader to occupy that spare external 3.5in bay, but you can’t have everything.


Both a DVD-/+RW drive and a DVD-ROM drive are included with this setup. I’ve never really seen the point of having two drives since you can get single drives that can read and write all formats – who really does disk to disk copies these days? Even so, with two spare 5.25in drive bays there’s still plenty of room for any additional expansion you may require.


On the left panel there is some ducting that provides a direct path for cold air to reach the CPU. There’s also a meshed section above the expansion cards to provide some additional airflow to this area. It’s also very welcome to see a 120 mm exhaust fan on the rear, this will provide maximum airflow with minimal noise.

Moving inside the case, everything is well laid out and there is plenty of room to spare. There are no sharp edges and there are even a few little extras like screw-less 5.25in drive mounts (with a holder for spare mounts in the bottom of the case), a removable hard disk rack and an easy open front panel. Cable routing is adequate and while its done tidily enough to help with airflow throughout the case, it’s by no means a masterpiece of organisation.


One hard disk is included with the system and there is room for three more (one in the hard disk rack and two just below the 5.25in bays) so your upgrade path is clear all the way up to a RAID 5, if you felt so inclined. 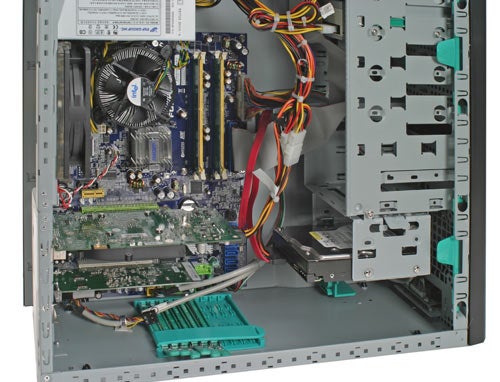 Speaking of which, the motherboard is capable of supporting RAID 0, 1, 5, and, 0+1 and includes six SATA ports to choose from. The motherboard is the Foxconn P9657AA-8EKRS2H, which is a very capable board based on the P965+ICH8R chipset. It also includes one eSATA port, onboard HD audio, Gigabit Ethernet, and, Firewire. Memory comes via two 512 MB DIMMs, which leaves two slots free to add more memory at a later date.


The included Logitech Deluxe 650 Cordless Desktop mouse and keyboard are wireless. However, they don’t come with a charger so you’ll need to keep a supply of spare batteries ready for when they randomly cut-out – and it will be random as there’s no software installed that would give any indication of battery level. They are both responsive and perfectly usable but are definitely towards the budget end of the spectrum and I would’ve preferred to see the extra few pounds spent on better quality wired input devices. I also feel I must point out the ugliness of the Vista start logo on the windows key of the keyboard, though, it really is awful. 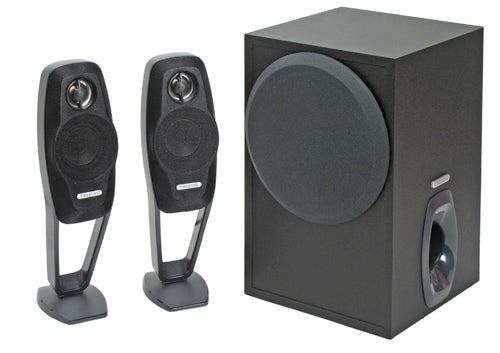 Unfortunately the Creative iTrigue 3220 speakers don’t improve the peripheral situation as they also suffer from being generally poor quality. They certainly look the part but unfortunately don’t play the part. On their own, the satellite speakers are completely devoid of any midrange. Try and balance them by turning up the sub-woofer and you just add distorted thudding bass to the mix. They would be adequate for casual gaming or listening to low quality mp3s but anything more demanding really shows their weaknesses.


Thankfully, the monitor goes a long way towards making up for the system’s other misgivings. It’s a 20inch widescreen from Viewsonic that has a native resolution of 1,680 x 1,050 and, in terms of features, is identical to it’s bigger 22inch brother the VG2230WM. Performance was good with sharp text and full and even colours. 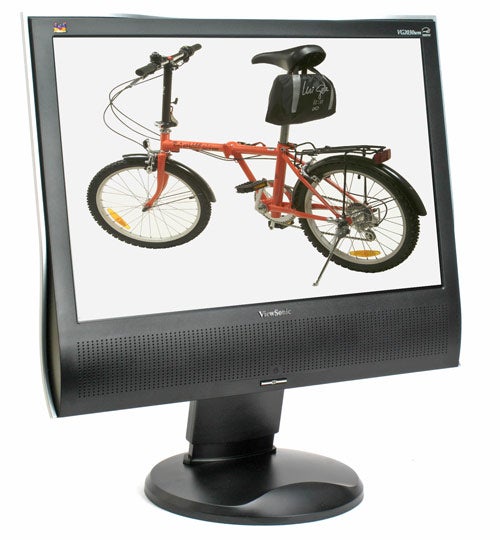 Finishing off the hardware side of things, a Media Center remote and IR receiver are included. So, you’re only a decent TV signal away from Media Center heaven – yes I am a fan of the whole Media Center concept.

The software bundle consists of Microsoft Works 8.5, Roxio Easy Media Creator 9, and, a seven-day trial of BullGuard anti-virus software. This is in line with what you would expect from systems at this price range.


To test the system we ran our usual set of benchmarks consisting of Spodemark 2D and 3D, Sysmark 2004 SE, and, PCMark06. Unfortunately, as this is the first Vista PC on which we’ve run any of these benchmarks, we did come across a few compatibility issues. Some of these issues we were able to iron out, others we simply didn’t have time to investigate fully due to the limited amount of time we had with the evaluation system. 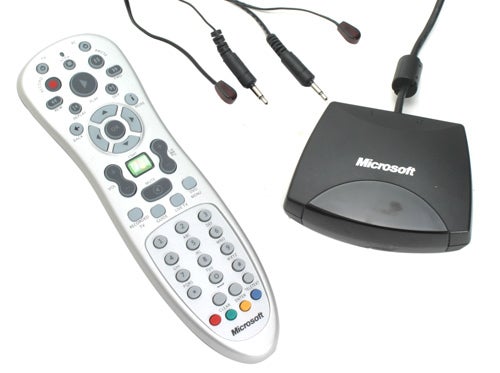 VirtualDub, which we use in SpodeMark2D, was the first casualty and it didn’t work at all. This meant that the multi-tasking results for all our tests couldn’t be completed. The second to fall was SYSmark 2004, which doesn’t support Vista. Thankfully all our 3D game tests ran without any problems, which bodes well for gamers. For comparison i used our reference Core 2 Duo E6400 system.


The single most overwhelmingly obvious thing about our testing was how woefully inadequate 1GB of RAM is when running Vista. The constant whirring and grinding of the hard disk as it struggled to keep up with virtual memory transactions was enough to test the patience of a saint. Adding in a 1GB USB memory stick – to utilise Vista’s ReadyBoost technology – didn’t help our benchmark results however subjectively it did seem to reduce the constant hard disk access. 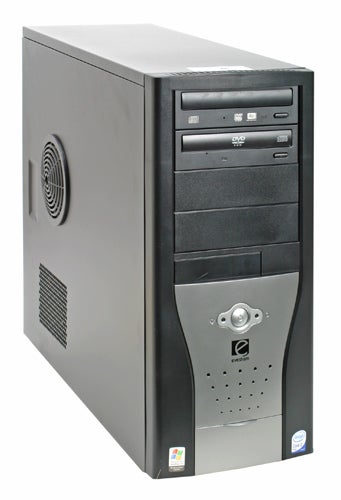 Memory issues aside, performance was on a par with what you would expect for a system of this specification. Unfortunately, the ability of these components to keep up with the latest games – particularly the graphics card , which isn’t DirectX 10 compatible, may be questionable. However, if you want a better gaming experience you’re going to have to fork out the extra money for a fully fledged gaming system.


On the surface, Evesham has produced a good all-round system that does a fine job of showing off Vista’s multimedia capabilities. However, it’s partially let down by average peripherals and simply not enough RAM.