Evesham Technology is one of the oldest PC manufacturers in the UK and has a reputation for both well-built products and good after-sales service. It may not be the cheapest source for a business PCs, but over the years many customers have returned to Evesham to renew their aging systems.


The model supplied for review is built into a low-profile desktop case, narrower than a typical desktop but about the same depth. There’s room in the front panel for a 5.25in and a 3.5in device, as well as internal space for a 3.5in drive. The microATX motherboard has all the essentials for a medium performance business PC, but don’t expect the graphics potential of a gaming or home entertainment machine.


Evesham supplies a 17-inch Cibox LCD monitor with a native resolution of 1,280 by 1,024. It has a sharply-focused screen with more than adequate colour reproduction and simple controls under the lower lip of its bezel. There’s tilt adjustment but nothing for height or rotation. The keyboard and mouse are both from Logitech. 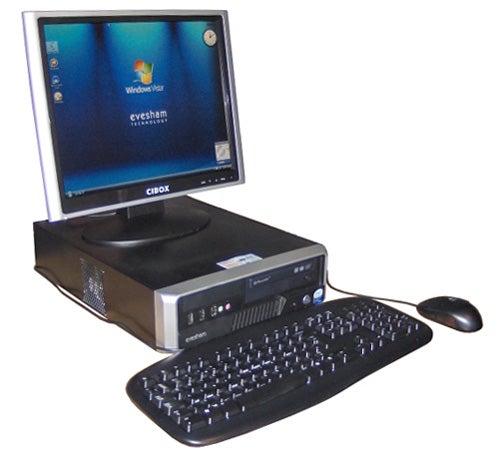 As far as ports go there are seven USB2.0 ones – two at the front and five at the rear – as well as three FireWire ports (one front and two rear). Front-mounted line-out and microphone sockets and a legacy parallel port complete what is otherwise a pretty unremarkable array by today’s standards.


The Prestige VP Plus model name covers a range of PCs, as this is a customisable marque which can be tailored to your own specification on the Evesham site. The review version is based on an Intel Core 2 Duo E6400 processor, which runs its twin cores at 2.13GHz and shares 2MB of level 2 cache between them.


This restriction in the cache level will cost the processor up to 10 per cent in flat-out performance, compared with its 4MB-cache siblings. With typical business applications, though, you won’t notice this kind of performance difference and the E6400 processor is considerably cheaper than its better-endowed companion. It produced a PCMark05 score of 4,369, a very respectable result for a business PC.


The processor is coupled to a full gigabyte of main memory – plenty to run Vista Business and typical applications such as the supplied copy of Works 8.5. Likewise, Intel’s GMA3000 on-board graphics chip is good enough for the majority of business applications but it’ll struggle with the latest 3D games.

Both the 160GB hard drive and the 18-speed DVD rewriter are SATA devices, ensuring good data throughput when storing and backing up your files. There are three fans in the case; one in the power supply, another over the processor and a third on the case side. The processor fan developed an intermittent rattle during testing; a shame as the machine is otherwise very quiet.


Even though the system board is a microATX design, all four expansion slots, comprising 16x and 1x PCI Express slots as well as two PCI ones, are available. This gives the option of installing a faster graphics adapter at a later date. 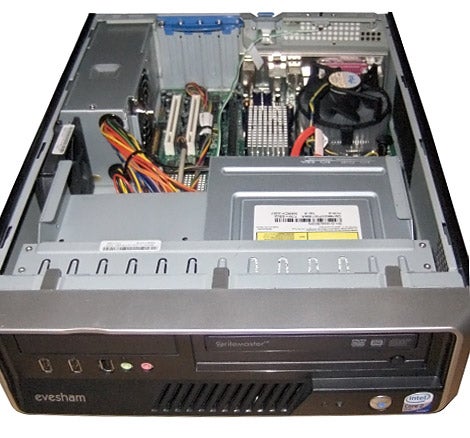 The Intel system board also includes Intel’s Active Management Technology (AMT). This is ideal if the VP Plus is going into a business environment where remote monitoring from a centralised IT department is required. AMT can be used for checking the status of networked machines, updating their PC and anti-spyware protection and generally ‘healing’ them as Intel likes to say.


To do this, AMT doesn’t use software agents but can gain access to diagnostic data held in non-volatile memory on the PC, which is available even if the operating system has crashed. Vista crash? Unthinkable, we know, but it’s still handy to have a remote way in when you can’t boot to Windows. It seems a bit odd to pair the obviously corporate AMT with Works rather than Office, but you can always try before you buy the heavyweight integrated suite. Or you could run OpenOffice for next to nothing.


If you’re after a PC for general SOHO duties you won’t go far wrong with the Prestige VP Plus. It’s not the cheapest, but it’s neatly put together in an all-Intel design, has plenty of expansion potential and enough processor and storage muscle to handle most business and some leisure applications.