The Evesham eMedia is the first full production Media Center PC to arrive in the TruestedReviews offices and I was obviously excited at the prospect prising it out of its large box. It has to be said however, that after releasing the eMedia from the constraints of its packaging I was a little disappointed with what greeted me.


Evesham has chosen to build the eMedia in a very large chassis resembling a full ATX desktop case. Obviously Evesham has tried to make the eMedia look more “lifestyle” by making the case black and silver. There’s even the obligatory blue indicator lights on the fascia, adopted by almost every consumer electronics device since the PlayStation 2 started the trend.


I tried placing the eMedia under my TV on a standard TV/VCR stand but the unit was too deep and ended up hanging off the edge at the front. Although even if the depth wasn’t a problem, the height makes it a little too conspicuous to sit unobtrusively underneath your TV.


The silver fascia sports a single optical drive which is curiously labelled “Compact Disc” even though it’s actually a DVD drive. Next to this is a media card reader that will accept just about every flavour you can think of.. The card reader means that you can transfer all of your digital photos to the eMedia without the need to connect your digital camera. It’s also handy for transporting data between the eMedia and a PDA or notebook.


If however you do need to physically connect a device to the eMedia you’ll find two USB 2.0 ports hidden behind the flap in the front fascia. There are also headphone and mic sockets. There is a cut-out for a FireWire port but unfortunately Evesham hasn’t included the connector. This is a real shame considering the home entertainment angle of the eMedia. So, anyone who wants to download movies from a DV camcorder will be disappointed.


At the rear you’ve got some more connection options. There’s a backing plate with both coaxial and optical SP/DIF ports. There’s a standard 56k modem and a 10/100 Ethernet port. Unfortunately there’s no wireless LAN built-in, and there’s also no free PCI slot. Of course you could add a USB WiFi adapter if you needed wireless functionality, but that would be a less elegant solution.


The DVD drive is a high-quality Sony solution that will write DVD+R/RW, DVD-R/RW and CD-R/RW. This means that it will be simple to burn your movies, or even any recorded TV shows you might have stored on the hard drive.


So, the eMedia isn’t going to win any design awards, but does it work? The simple answer is yes, and to be fair, it works very well indeed. A certain amount of respect must be given to Evesham for having production Media Center PCs available at the day of launch, complete with proper packaging and documentation. Many other manufacturers are still working on their systems and won’t be able to deliver for a couple of weeks yet.


In use, the eMedia was incredibly simple to setup and use. The version I received from Evesham was fitted with a digital TV tuner, so it needed to be in an area with a strong digital TV signal, and used with a high-quality aerial. Luckily I had a powerful TV aerial installed in order to use the now defunct On-Digital service a few years back, so I hooked up and eMedia and waited for it to locate some channels.


It didn’t take long before the eMedia had locked onto 32 free-view digital channels, and the resulting image was of surprisingly high quality. There were a couple of instances when it dropped the signal and the screen turned black, but no more so than with a dedicated set top box.


Controlling the TV functions from the Media Center remote is simple and intuitive. Pressing the pause button while you’re watching TV will pause the image while the rest of the programme is transparently recorded. Pressing pause again will resume your viewing from where you paused it, even though the live broadcast may be seconds or minutes ahead.


With a 120GB hard disk inside, the eMedia should be able to record a lot of TV before you have to start copying to DVD discs. That said, most people will erase a programme once they’ve watched it anyway.


Unfortunately the infrared receiver for the eMedia is not integral to the system case, and a bulky infrared receiver has to be connected to a USB port. Evesham has tried to make this solution less cumbersome by supplying a mini IR receiver that plugs into the big one. This way, the large receiver can be hidden out of sight, while the small one is stuck to the front of the case. Unfortunately the cable for the small receiver still has to be routed to the large one. Hopefully future models will have the receiver built into the chassis.


The eMedia also ships with a wireless Microsoft keyboard and mouse. Unlike the Media Center remote, these items use radio signals to communicate. Again however, the receiver is not integrated into the case, and a large flat RF receiver has to plug into one of the USB ports. The range of the keyboard and mouse is impressive, and there’s no need for line of sight, as with the remote.


Evesham has put a lot of effort into making the eMedia quiet, and it has to be said that you can hardly hear the unit under normal operation. The hard disk is a little noisy however, although you only really notice this at startup. Taking the top panel off the case reveals a thick strip of Akasa soundproofing foam, which seems to be doing a very good job. The system fans are also running at a fairly low RPM to keep the ambient noise to a minimum.


The eMedia we received was a bare system, so there was no screen or speakers included. This isn’t a terrible oversight since many users will want to connect their Media Center PC to their TV rather than a PC monitor. The eMedia can connect this way via either S-Video or Composite video. However, most TVs tend to have SCART sockets at the rear and S-Video and Composite video connectors at the front, so you’ll most likely have to trail cables around to the front of your TV to connect it. I wasn’t expecting a SCART connecter at the back of the eMedia, but a composite or S-Video to SCART converter in the box wouldn’t go amiss.


Evesham does ship the eMedia with a 17in widescreen TFT flat panel, and this option will set you back £1,649 with speakers as well. The bare system comes in at £999, with both prices including VAT.


As a machine that runs Microsoft Windows XP Media Center Edition, the eMedia does a very good job. It’s easy to setup and easy to use, while it’s quiet enough not to be intrusive in your living room. Unfortunately the unit itself is just too big and ugly to be a consumer item. The system case needs to be slimmer and look more like a DVD player than a PC. It also needs all its connectivity integrated into the box instead of connected via USB.


I know that Evesham is planning more machines that will run Media Center and I hope very much that they will look the part. If we’re really going to see a Media Center PC in every living room, it will have to fit in with the ever more stylish décor of the modern home.


Evesham should be congratulated for getting its Media Center Product out so quickly, but the eMedia doesn’t really bridge the gap between the IT and consumer electronics worlds.


Evesham has informed us that future production versions of the eMedia will sport front and rear mounted FireWire ports. 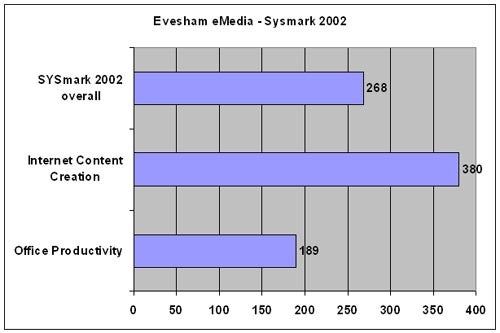 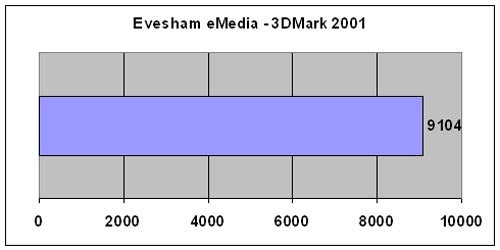