If it seems like we’ve been going on about SLi graphics technology for ages, it’s actually because we have. We first reported that nVidia was bringing back SLi back in June 2004, and here we are, a mere eight months later, actually reviewing a PC based on the technology.


The reason for this delay is that its introduction hasn’t gone as smoothly as nVidia would have liked. First, there has been a distinct shortage of compatible cards, with GeForce 6800GTs hard to get hold of, and 6800 Ultras virtually mythical. Indeed the two SLi set-ups we’ve tested have been based on the less impressive 6600GT rather than the 6800. 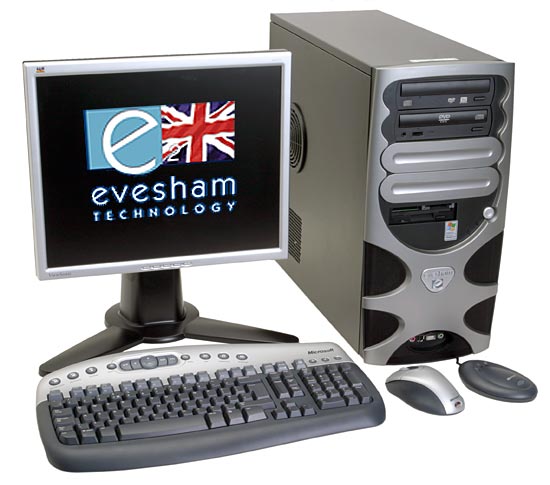 It also took a while for nVidia to get the technology working, in fact, the SLi connector on top of early samples of compatible PCI Express cards doesn’t actually work. Then once SLi finally appeared it turned out that games required driver support, a fact which wasn’t made apparent with the initial announcements. The current list of games that fully support the technology is pitifully small and of those that do, even now there are driver issues. That said, nVidia is finally getting its act together with SLi and on a recent visit to our offices an nVidia spokesman claimed that an upcoming driver update will include SLi profiles for another 24 titles, which is positive news.


The result of this means that SLi has been very much the preserve of brave early adopters, who tend to be willing to spend big money on their gaming set-ups. Up until now, the pre-built SLi machines have been impressively hardcore but very expensive machines costing between £2000 and £3000, from specialist builders like Scan and Alienware. Of course, a company liked Evesham is more interested in actually selling PCs rather than showcasing technology and as such, has produced an SLi system for the masses. The machine that’s currently sitting before me will set you back a mere £1,644 including VAT, which considering what you’re getting, makes the Decimator a real bargain for serious gamers. 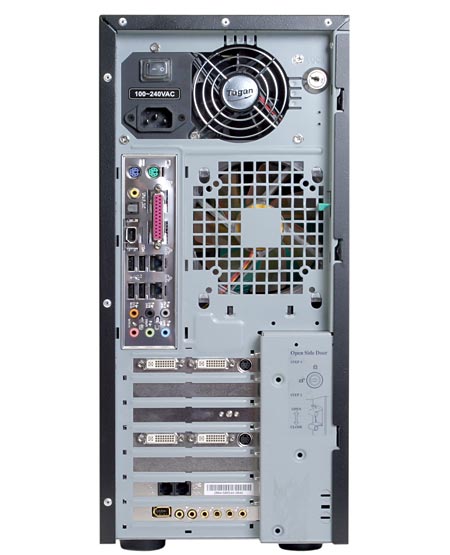 So what’s the difference between the Evesham and previous SLi machines? With components such as a powerful Athlon 64, 1GB of DDR memory and two GeForce 6800GT cards, it’s not as if it’s short of gaming muscle. But as is generally the case, the devil is in the detail.


Evesham has selected an Athlon 64 3500+ to power the Duel SLi. This processor is certainly no slouch, but it’s considerably less expensive than the likes of an Athlon FX chip, and while it may not produce the sky-high benchmark numbers associated with the top end chips, it certainly offers a higher bang-for-buck ratio.

Evesham has also been sensible with the memory, going for two sticks of fairly stock Kingston PC3200, rather than the more esoteric memory that you’re likely to find in more prestigious systems, which offer higher clock speeds and/or lower latencies. This is another cost effective measure, as this ‘posher’ memory will in practice, only be a few per cent faster for a much greater cost outlay. The two sticks provided ensure that the best use is made of the dual-channel memory controller inside the Socket 939 Athlon 64 chip, and there are two more slots available for further expansion.

Internally you’ll find a single hard drive, – an SATA connected Maxtor 6B250S0 offering 250GB and an impressive 16MB of cache. Your higher end gaming system is likely to include two or even three disks in a convoluted RAID array, but when push comes to shove, 250GB is enough space for practically everybody, and RAID for a desktop gaming system is probably overkill. Indeed more performance benefit will be gained from the disk supporting Native Command Queuing (NCQ) and the hard disk score of 5080 in PC Mark 2004 is pretty healthy. 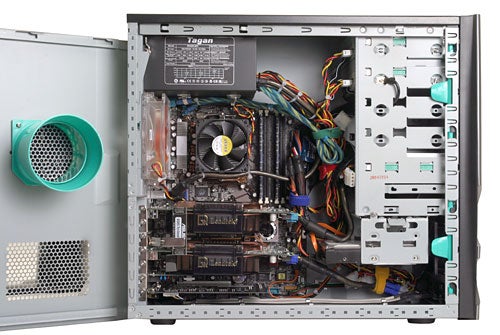 Of course the star of the show internally is the pair of GeForce 6800GT cards, located in the two PCI Express slots on the Asus A8N-SLi motherboard. There is in fact another PCI Express slot in between these but it is totally obstructed by the large bulk of these cards. Evesham has selected to use Leadtek cards, probably for the simple reason that it was able to secure supply of this brand. This is slightly unfortunate as while these cards certainly perform well, they make an awful lot of noise. In fact as well as a CPU fan, there’s a 120mm rear fan, a front fan, and even one on the motherboard Southbridge chip. There are also two in the power supply unit. In combination with the two very noisy fans on the graphics cards this makes the Evesham one of the noisiest systems we’ve heard in a long time. Because of the heat generated by all the components packed into the case, Evesham has had to modify the side panel so that there is a grille above the CPU cooler and the graphics cards. It works but it does mean even more noise escapes. The cooling system certainly does its job though and round the back you’ll feel a strong blast of warm air being ejected from the interior.


Evesham has specified a Tagan power supply, the brand that won our recent group test. Surprisingly perhaps, it is only rated at 420W but we had no power related problems during our testing. The Tagan supplies two dedicated connectors to the graphics cards and one directly into the motherboard. Evesham has used the Tagan supplied cable tidies to keep things as neat as possible but with so much going on inside it’s not the neatest of systems, though there was nothing left trailing that would impede air flow. 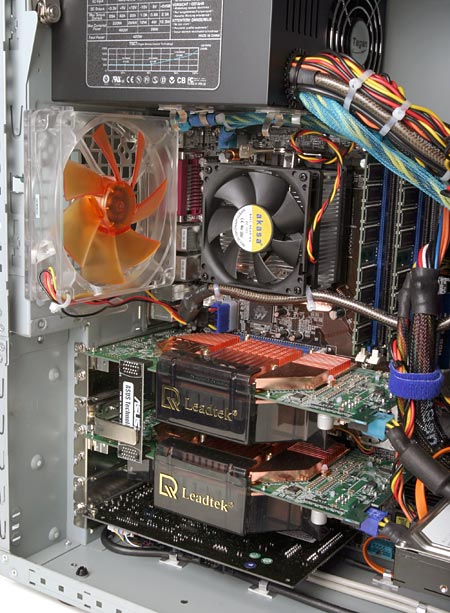 The case that Evesham has chosen is its standard box with a spider-like front. Personally I’m not a fan of the way it looks though others in the office thought it looked good – purely a matter of taste. It’s certainly not particularly lavish inside or out, with no fancy hinges or swinging side panel mechanism – it’s all pretty functional. That said the side panel lock on the rear will be appreciated so you can keep the interior components safe from prying hands, unless of course the whole box is nicked. 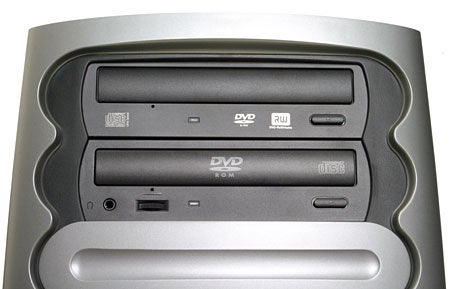 There are two external 5.25in drive bays and one internal, as well as one internal 3.5in bay ready for expansion, which could be used to add a second hard disk drive. In the top two external 5.25in bays are a 16x dual-layer Sony DVD Burner and a DVD/CD-RW combo drive. Sensibly, rather than a plain old dated floppy disk drive, Evesham has supplied a 7-in-1 card reader – a very useful inclusion in today’s digitally dominated camera world.

Sound wise Evesham has gone for a Creative Audigy 2 ZS sound card, despite the fact that the motherboard offers 7.1-channel integrated audio. This also offers both optical and coaxial outputs, so you can switch to that if preferred. Hooking up to the Audigy is a set of Creative T7900 7.1 speakers, which offer reasonable mid-range sound output. 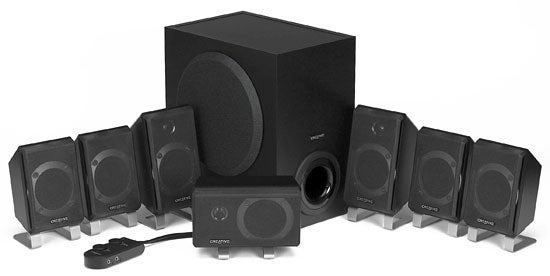 For a display Evesham has chosen an LCD screen that was good in parts. I mean this quite literally as the panel displayed a reddish tinge across one part of the screen. However, we had another example of the same monitor in for review and it didn’t exhibit the same fault – in fact the other model was so good that it walked away with a Recommended Award. The screen is a ViewSonic VP171-2, a 17in model with a 1,280 x 1,024 resolution. The record low 8ms response time makes this a good gamers’ screen but at the same time the resolution means that you won’t be able to make the most of the power of SLi available. A larger higher resolution monitor would have been preferable but inevitably the sensible price point Evesham has hit is the limiting factor. That said, the sweet spot right now definitely seems to be 1,280 x 1,024 with all the image enhancing features cranked up – and the combination of SLi and ViewSonic screen make the most of that.


Finally there’s the keyboard and mouse – a wireless Microsoft set. The keyboard is bolstered by a plethora of handy shortcuts and hot keys but the wheel on the mouse is bulky and has an unpleasant plastic feel. That aside, a wireless combo just doesn’t feel right for a gaming system – personally I can’t play games with a wireless mouse, and most of the TR team agree. However, specifying a wired mouse is only likely to reduce the cost, so it shouldn’t be an issue. 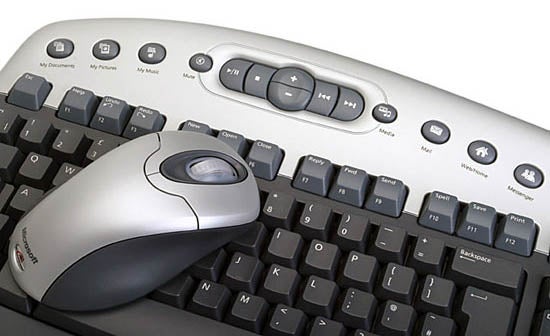 As for performance, the scores reflect the politics on the graphics card market as much as the technology. In Half-Life 2 even SLi can’t match an ATI Radeon X850XT PE, which storms ahead at all resolutions. In Doom 3 however, nVidia’s SLi takes a commanding lead, though not to the same extent.


Far Cry is perhaps a fairer test in that its development isn’t closely linked to one of the two companies, and here SLi comfortably doubles the score of the X850XT PE. In 3DMark03 and 3DMark05 the Evesham SLi system turns in bigger numbers than the X850 though interestingly the tests failed to complete at higher resolution with FSAA and AF enabled, further proof of driver teething troubles. It’s also worth mentioning that the X850 XT PE was benchmarked with an Intel Pentium 4 Extreme Edition 3.4GHz.


Ultimately, Evesham has built an impressively fast machine based on the latest technology, but somehow managed to keep the price down to an affordable level. If you’ve been holding out for an affordable SLi PC, your wait is over.


The Evesham Duel SLi shows that SLi can be built into an affordable system. It’s not a fully loaded luxury lined box, but the only real compromises that might give cause for second thoughts are the limited screen size and the sheer noise of the machine. But considering the affordable price, it’s pretty much impossible not to recommend the Duel SLi.


When this review was originally posted the price was quoted as £1,399 inc VAT, but Evesham contacted TrustedReviews to say that a mistake had been made and the price should have been £1,399 ex VAT (£1,644 inc VAT). As such, the scores have been adjusted accordingly, but even with the higher price, we still feel that the Duel SLi deserves a Recommended Award.