A lot of Everbody’s Golf World Tour will seem very familiar if you played Everybody’s Golf on the PSP. In fact, a lot of it will seem familiar if you’ve played any of the Everybody’s Golf games developed by Clap Hanz for Sony on the PlayStation or PS2 – or the first Everybody’s Golf and Mario Golf games developed by Camelot before that. Frankly, this is no cause for disappointment. Camelot nailed the formula for cutesy golf games early on and Clap Hanz has been refining it ever since, combining a distinctly Japanese cutesy cartoon style with a surprisingly accurate golf game and throwing in enough bite-sized tournaments and unlockables to keep you glued to the screen for months. I mean that, too. Eveybody’s Golf is the only PSP launch game that I still play on anything like a regular basis. 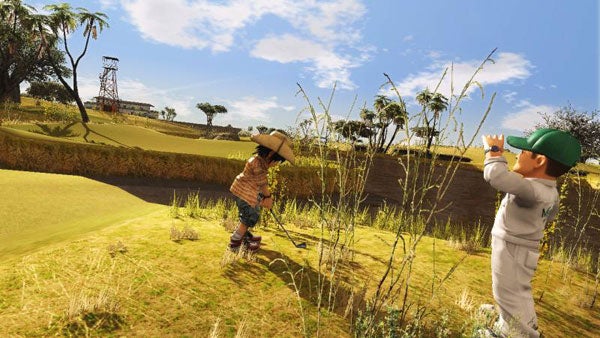 Everybody’s Golf World Tour is much the same game, but with new courses and new features designed to take advantage of the advanced capabilities of the PS3. Now, I know what you’re saying – how can a cute, cartoon golf game possibly harness any of that awesome 3D horsepower? Well, World Tour proves that it can. While the characters are still the large-headed, wide-eyed caricatures familiar from past games, they now display a fantastic quantity of detail, not just in the expressions and the hair and the look and texture of their clothing, but in the way that clothing shifts and flows with the breeze. The closer you look, the more you’re impressed. 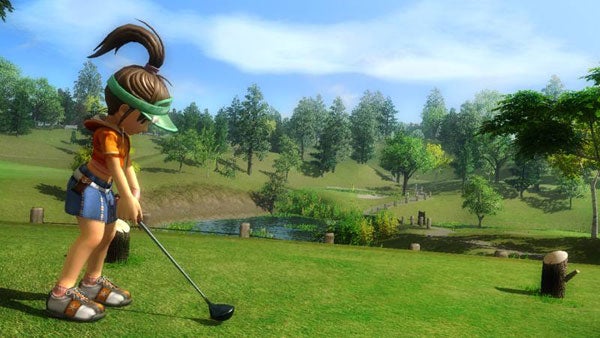 In the meantime, the courses have grown more realistic, with more lifelike grass textures and tree models, and some lovely reflective water hazards dotted around. On top of that, there’s an awful lot of stuff going on in the background, from the spectators wandering around the course, dodging the hard spherical objects hurtling their way, to leaves blowing in the wind and charming little critters who hop and scurry on the fairways. And all this is bound together with a superb lighting engine that gives the game the sort of sheen you might normally see in a top-drawer kid’s CGI movie. World Tour might just be a cartoon golf game, but you won’t have seen many cartoon games of any type that look as solid and believable as this. 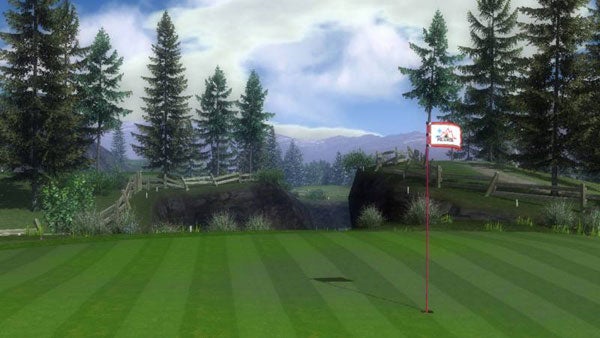 Structurally, World Tour works in the same way as EG did on the PSP. You can play basic strokeplay matches, but the core of the game is a challenge mode where you work your way through a series of tiered tournaments and one-on-one matches. You begin with two characters to choose from, and as you win tournaments you’ll unlock further characters, outfits, caddies, golf clubs, and – finally – new tiers, courses and levels of play. While you’re free to switch characters between events at will, you’re encouraged not to by a loyalty system. Keep playing with the same character and you fill their heart gauge, levelling them up and unlocking new shot abilities or performance boosts. It’s all fairly simply, but – boy – does it work.

World Tour does introduce a new control system, but don’t worry. EG still hasn’t adopted any Tiger Woods style analogue system, and the new mode is really just a variant of the classic three-click bar (which you can still opt for, should you prefer). Rather than a bar gauge, you now use the player’s backswing to get the strength of your shot right. With a handy red flash at the maximum end and a gold flash at the optimum point, it’s actually more intuitive than you might think. Having clicked once to start the backswing and once for power, you then time the impact by clicking once a decreasing circle gets within the onscreen brackets. Time it right, and you’ll hit it straight and true. Time it wrong and you’re left with a damp squib or a wayward shot. Again, simple but perfectly functional. 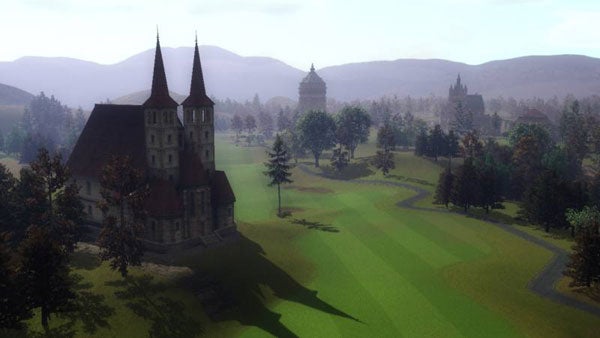 The game succeeds for a number of reasons, but I think a lot of it comes down to charm, solid course design and the fabulous flow of play. The charm bit is easy. While it’s possible to get annoyed with the amusing tics of the characters or the background chatter of observers after a while, you’ll spend a long time being amused by their little warm-up animations, exuberant celebrations and foul displays of temper first. In fact, part of the long-term appeal lies in getting to know the new characters and see what antics they’ll get up to. The course design, meanwhile, is brilliant in a way that you might not fully comprehend at first. It’s tempting to moan that you’re restricted for so long to one course, then two courses, then three courses and so on, but variations in wind, weather conditions and the competition keeps each one interesting long past what should be its use-by date, and each one has distinguishing features – like the walled villages in the Okinawa links course – that will keep challenging you no matter how many times you play them. The European course features some particularly fiendish greens, and where else but Everybody’s Golf would you find yourself playing among African elephants, Dutch windmills or gothic towers? 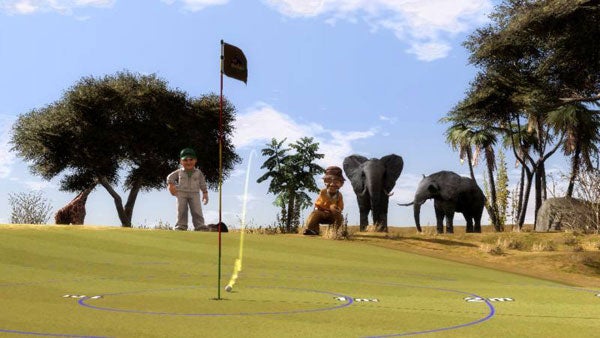 What I love best, however, is the way the game flows from one shot to another and then from one event to the next. World Tour is always light on its feet. It’s never ponderous or too obsessed with real sporting atmosphere or showing off the ultra-realistic rendering of its virtual athletes’ faces. There are few tedious lulls anywhere, and even when you blow the vital shot at the end of the tournament and face another trawl through the same nine holes, it’s hard to get too frustrated. Like EG on the PSP, World Tour is hideously morish. The fact that each event can be hacked through in around 15 to 20 minutes makes it all the more tempting to just do one more, then just one more, then – hey, why not? – just one more after that. At the same time, the difficulty curve is perfectly judged, easing players in with events that are practically impossible to lose without multiple double bogeys, then ramping up the challenge as new courses and events emerge.

The game’s light-hearted charm continues online, where you can mix with other players in a palatial virtual clubhouse using a range of cute little customisable avatars (with more that can be unlocked in the single-player game). You can hang out and shoot the breeze, but there are plenty of eight-player matches going on, plus a selection of larger 50-player tournaments with in-game prizes. Even in the eight-player matches, the game flies. Rather than wait for each player to take their turn, you all play simultaneously with ‘ghost players’ overlaid on each screen. 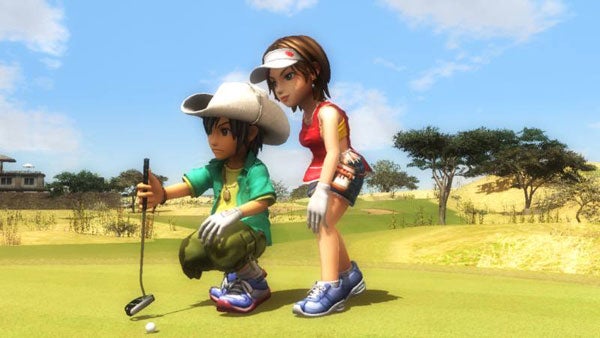 The game also shines as an old-school multiplayer experience, even if you have the nuisance factor of sharing one joypad. World Tour’s easy to pick up gameplay, short matches and cartoon charm makes it a winner with a wide range of friends and family members, and there’s something about playing with people you know on the same sofa that gives the game that little extra pull. Like Wii Sports Tennis, I’ve yet to find anyone who doesn’t like the game – though I’ll admit that I’ve yet to try it with anyone I’d consider a serious golfer.


And it’s with this last group that World Tour might fall flat. It doesn’t even attempt to rival Tiger Woods when it comes to real courses, real golfers or an accurate golf simulation, and there are some people who won’t be satisfied with anything less. In fact, those same people are the people most likely to be annoyed by World Tour’s deliberate silliness and lack of respect for the noble Scottish sport. If you really, really can’t stand chirpy voices, cheery muzak and silly flaming strike effects, it’s also probably not for you. 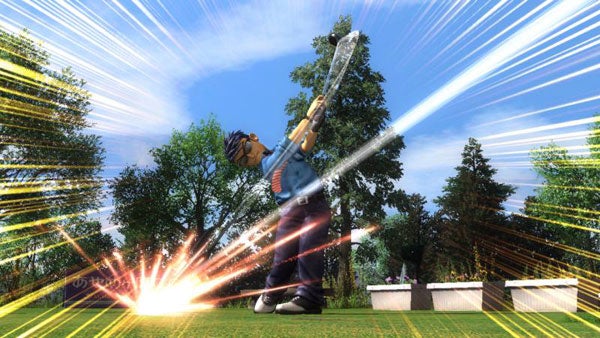 That’s fine, and you’re perfectly free to enjoy Tiger Woods ’08 instead. For the rest of us, however, I’d recommend Everybody’s Golf World Tour any day. Even though it only has six courses, it’s more immediately entertaining, more enjoyably paced and just more fun – and that goes whether you play alone, online or with friends. Even if you’re not a fan of golf, consider at least renting it and giving it a try. If you like it and buy it, it’s the sort of game you’ll still be coming back to you in a year or even two year’s time.


In terms of gameplay, World Tour is not a huge advance on earlier titles in the series. That said, the shiny new 3D engine and the great course selection make the people’s golf game even more irresistible than ever.