Epson’s mid range all-in-one machines attract a lot of loyalty from customers as being good, robust workhorses. This latest Stylus SX515W machine builds on the success of earlier, similar models and adds in the increasingly popular wireless connection to its feature set.


Apart from the piano black scanner lid, complete with its visual texture of grey dots, and a control panel composed of flush-mounted buttons, the layout of this all-in-one is pretty conventional. Paper feeds from a vertical stack at the back to a telescopic output tray at the front and the well-featured control panel down the left-hand side is supported by a 63mm full-colour LCD display in the back left-hand corner. 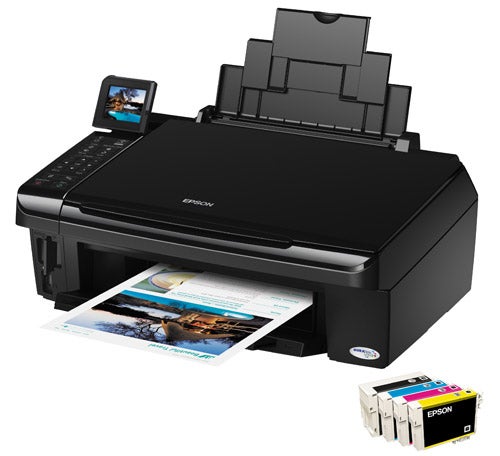 Under the control panel at the front are two memory card slots, which between them take everything from a MicroDrive through to the latest xD variants. There’s a PictBridge socket, too, and this doubles as a USB drive connector. You can print files from a USB drive, though you can’t scan directly to it.


The printer can be connected via USB or Ethernet connections, set into the left-hand side, but the most popular connection may well be Wi-Fi. To set this up, you need to temporarily connect the Stylus SX515W to your PC via the supplied USB setup cable, but at least the software installation is completely automatic, apart from having to enter your wireless pass phrase. 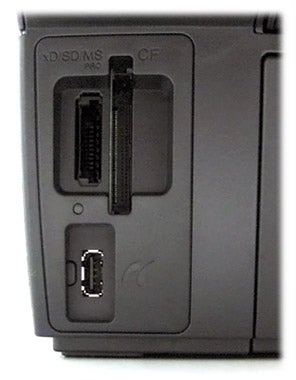 The printer comes with a full version of Abbyy Finereader Sprint 6 Plus OCR software, as well as a suite of Epson control applications. All this support software is pretty mature now and is well up to handling basic day-to-day printing and scanning tasks.


OK, the claimed print speeds are as silly as always, at 36ppm draft for black and colour, but we saw a black text print speed of 11.5ppm in normal mode for a five-page document and 14ppm for a 20-page one. Our five-page black text and colour graphics job returned 6.25ppm.

These are spectacular speeds, when compared with rival all-in-ones from companies like Canon, HP and Lexmark, which typically manage around half of what the Stylus SX515W produced. There is a downside to this unexpected speed, though, in the amount of noise produced. We measured peaks of 66dBA, which is pretty loud, though most of this comes from the paper feed mechanism, as usual.

As well as the 36ppm headline print speed claim, Epson also reckons the machine can produce a 15 x 10cm print in 20 seconds. We asked what settings were needed to get this speed, since all our photo print tests took over a minute. The company said a draft, borderless print on its Premium Glossy paper would do it, as long as we didn’t include processing time. When we tried this, the printer took 26 seconds, 8 seconds of which were processing time. So it can be done, though the quality of the photo produced is pretty much as it says; draft. 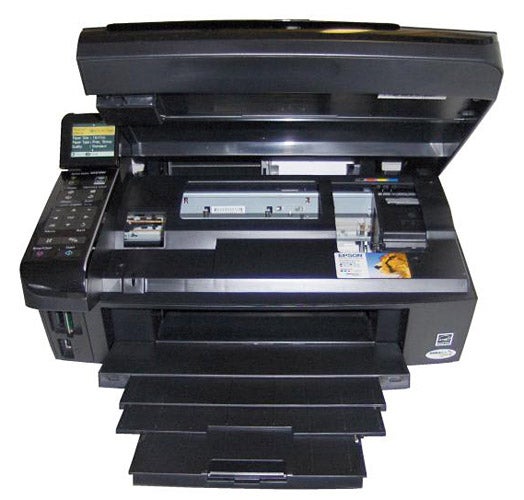 Other prints are better. Photo images are sharp and natural, with some shadow detail and good natural colours, while business graphics are bright and show tight registration of black over coloured backgrounds. Black text is a little shaky, with some irregular character uprights, but is still good enough for general-purpose correspondence.


A colour photocopy showed quite a lightening of colours and solid fills were under-saturated. This is largely a function of the scanner, which also showed some changes in hue when sample pages were scanned into a PC. 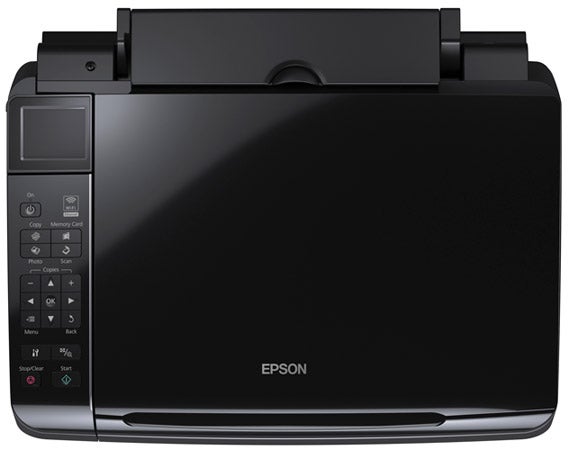 It’s a strange thing, but Epson recommends the T0711/2/3/4 set of cartridges – known as the Cheetah set, because of the picture on their packets – for this machine. However, the Stylus SX515W also accepts the T1001/2/3/4 combination, the Rhino set, which hold a lot more ink. 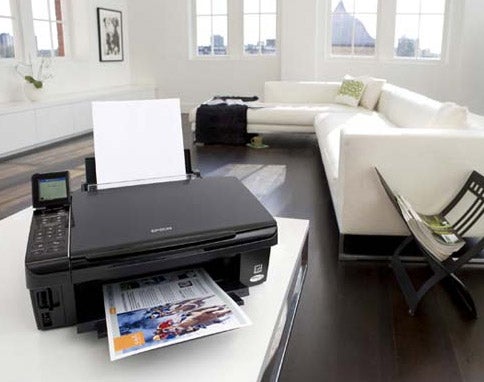 Yet the T1001 cartridge yields over four times as many black pages as the T0711, while the T1002/3/4 cartridges yield on average 2.5 times as many colour ones as the T0712/3/4. This means that using Rhino cartridges you get page costs of 2.73 and 7.14p, including 0.7p for paper, while using the recommended Cheetah ones gives equivalent costs of 4.51p and 11.72p. Perhaps it’s no coincidence the lower yield cartridges are called Cheetah – we know which ones we’d use. The Rhino running costs are actually very good for an inkjet all-in-one.


The Epson Stylus SX515W is an impressive all-in-one printer at a very realistic price. It prints very quickly for an inkjet and produces good quality photos and reasonable plain paper prints. If you buy the Rhino cartridges, it’s also very cheap to run, though Epson appears disingenuous in recommending lower-yield consumables, which will cost you more.