Although the entry-level market for inkjet printers is a lot smaller than it was, most of the main players still have at least one model at under £40. Epson’s offering is the Stylus S21, a cheap and cheerful four-colour inkjet, which uses separate ink tanks for better economy.


The printer is a wide, but shallow machine, until you add the two detachable paper trays, one for feed at the rear and the other for output, at the front. Between them, these two add considerably to the machine’s footprint. Up to 80 sheets of plain paper can be stacked in the feed tray at the rear and run directly through to the output tray. 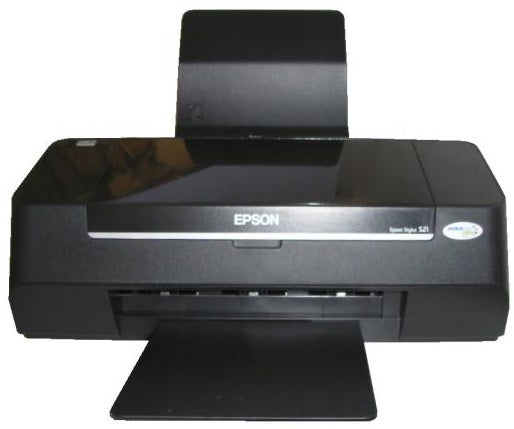 There are only two buttons for physical control of the printer, both of which have LED indicators set into their tops. The first is a power button, where the indicator flashes when the machine isn’t ready to print, such as at switch-on, and the second moves the print head ready for cartridge change, or performs a cleaning cycle when held down.


Press down the cartridge change button and the print head moves to an access position, so the head carrier cover can be lifted and each of the four individual ink cartridges inserted. It takes moments, though a while longer to run through the two-stage head alignment, where visible lines are compared in a variety of different print swatches and numbers have to be typed back into the alignment applet. 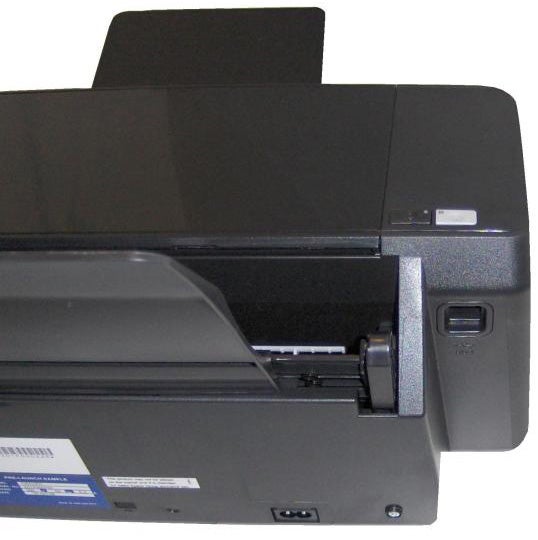 Printer software includes Easy Photo Print, a simple photo editor and print manager and Web-To-Page, a Web page print utility of a type all the main printer makers are now including as well as the driver itself. Web-To-Page is only compatible with Windows 2000 and the 32-bit version of XP.


Drivers are provided for Windows from 2000 onwards and OS X from 10.3.9. There’s no mention of any Linux support for this machine. As you’d expect, there’s just a single USB socket at the back – no Ethernet or wireless in a machine at this price.

Epson’s speed claims for this printer are laughable. The company believes it can print up to 26 black pages or 14 colour pages per minute. Conditions would have to be very special, as in our normal mode, five-page black text print, it managed just 2.36ppm and even on the 20-page document, which normally bumps up the overall speed quite a bit, it only increased to 2.42ppm. The five-page text and colour graphics test only produced 0.82ppm.


These speeds are very slow and it’s rare we see a printer which can’t manage a page a minute of normal print. The photo print speed is also very sluggish, taking two minutes in normal mode and a whopping three minutes, 50 seconds in Best Photo.


The quality of the photo prints in both modes is very good, though perhaps not up to the levels of Epson’s more expensive models. Colours are natural and while there’s a little visible texture in large areas of sky, detail is generally sharp, in light and dark areas of an image. 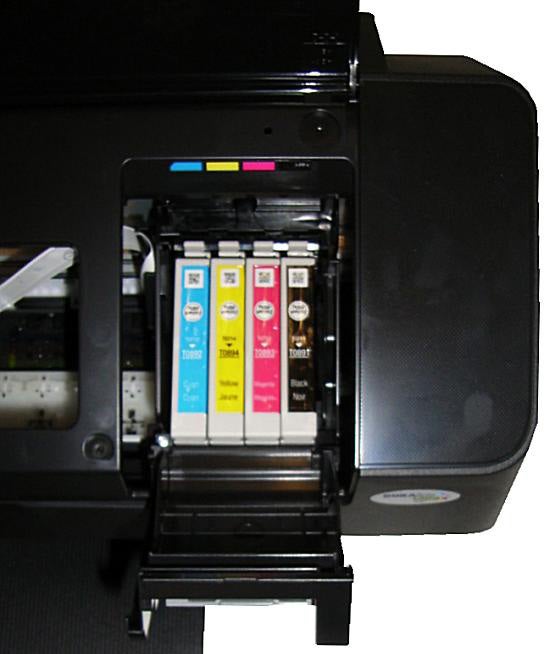 Plain paper prints have never been Epson’s strong suit and there’s a little jaggedness to characters, particularly in smaller point sizes. Greens and blues in areas of solid colour look a little mottled, but black registration over colour is tight.


One other aspect of the printer you should be aware of is the noise it produces. While printing the noise level bounces along in the 50dB decibel region, which is about average for a budget inkjet, but it rockets up to peeks of 74-75dB when feeding paper. Epson printers have always been noisy in this respect, but we haven’t recorded these levels before and the noise is very mechanical and obtrusive. Not a machine you want printing beside you when you’re answering the phone.


The four individual ink cartridges are available in one capacity, with the colour inks costing around £6 each and the black just under £5, but the cheapest way to run the printer is via the three-colour multipack, which brings the price of each cartridge down to just over £4.


Working through the figures gives a cost per page of 2.72p for black and 7.38p for colour, including 0.7p for paper. These are very good figures for a printer in this price bracket. Compare them with those for the HP DeskJet D1660, which came out at 4.30p and 10.25p for black and colour. The Stylus S21 isn’t clawing back its low purchase price.


We were recently impressed by the HP DeskJet D1660, HP’s equivalent to the Stylus S21 in the entry-level market. The S21 is quite a bit more expensive – £32 against £26 – and is both slower and a lot noisier. Against this, though, the running costs are considerably lower and photo print quality is better in normal photo print mode. Plain paper print is better on the HP, though. If general print quality is of prime importance, the HP will be your best bet, but for overall cost of ownership, the Epson S21 has it.