Multifunction machines, which combine printing with scanning and copying, are a growth area in the printer market, as are printers which produce prints from digital photos. Epson has now produced a photo all-in-one, aiming to hit both markets at once.


The Stylus Photo RX520 is a conventionally designed multi-function device, with paper feeding from the back and ejecting onto a front tray. This tray projects very little from the front of the machine. Most of its top surface is taken up by a flat-bed scanner which, interestingly, can be used to scan transparencies as well as paper originals. This gives the machine extra functionality for anybody wanting to transfer slides to digital format.


In front of the scanner is a well-appointed control panel, enabling easy operation of the copy and scan functions. The LCD display has a mere 38mm diagonal, which is big enough for displaying instructions and status screens, but is a little small for working with photos from memory cards. It’s actually not as big as the displays on many digital cameras. 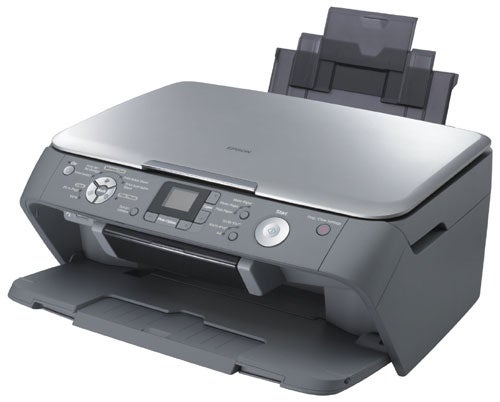 The RX520 isn’t exactly the most convenient device to use, either. The memory card reader is slung underneath the sloped control panel at the front, behind a swivelling smoked plastic cover. This is a bit awkward to use and also requires a cut-out in the paper exit tray to accommodate it. It would be a lot more convenient if the memory card slots were built into the control panel. More awkward still, if you need to print envelopes on the device, you have to reach right into its bowels to find the paper/envelope select lever.


The device takes four separate ink cartridges, which clip into a head carrier – this is easy to get at, once you’ve hinged the scanner section out of the way. The USB cable has to be fed through a channel in the printer’s casing to plug in internally near the front of the machine.


Software supplied includes ArcSoft’s PhotoImpression 5, which is a worthwhile photo editor, as well as several Epson utilities for Web and photo printing.

Print speeds can really be divided into two – plain paper prints of A4 documents and 15 x 10cm photo prints. The first is pretty slow; our five page text print took two minutes seven seconds to complete. This is way off the claimed black print speed of 20ppm and the claimed colour print speed of 19ppm is laughable. Even allowing for the difference between draft mode and normal mode prints (we always test in normal mode, printer companies always use draft mode), we were only seeing just over 2ppm in mono and less than 1.5ppm in colour.


When it comes to printing 15 x 10cm photos, though, things are very different. A print from a PC still takes an uncomfortably long 2:24, but prints from memory cards or a PictBridge camera come in at only just over a minute. This is a very competitive time, when compared with Canon or HP devices in the same price bracket.


Print quality for photos, as we’ve come to expect from Epson printers, is very good. Our test images were clear and precise with little noticeable colour cast. There was good definition in darker, shadowed areas and gradated areas of colour, such as skies, were smooth. Colours printed from cards and cameras were also natural and images sharp. 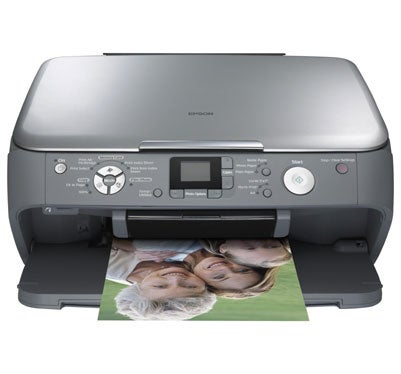 The same was not true of plain paper prints, though. Text came through looking fuzzy and, on closer examination, it suffered from bleed into the fibres of the paper. This was with the same general-purpose office paper we use for all printer tests, but we also tried Epson’s own bright white paper, with similar results. Colours were reasonably well reproduced, but colour copies, using the machine’s built-in scanner, lost a lot of vividness, when compared with first-generation prints.


You can buy consumables for this Epson device in a pack containing four ink cartridges and 100 sheets of 15 x 10cm photo paper. At around £25 a pack, this can be a cost-effective approach, if all you will be using the device for is printing photos.


If you’ll be printing both photos and A4 text documents, though, you’ll probably need to buy the ink cartridges separately. The best price we could find was just under £6.50 for each of the four cartridges, giving a five per cent black print cost of 2.5p and a 20 per cent colour print cost of 57.5p.


The black print cost is very competitive, but the colour cost is high, mainly due to the cost of Epson’s glossy photo paper. If you can find a lower price for that, it’s the biggest factor in overall colour print cost.


While this multifunction device does pretty much what it says on the box, it’s not always as easy to use or as quick as its price might suggest. The Canon Pixma MP170 device tested recently is over 30 per cent cheaper and is considerably quicker at printing text pages. For its main function of printing photos, however, the Epson Stylus Photo RX520 does a good job at a reasonable price.