The humble inkjet printer has been rather overshadowed in recent times by the all-doing multi-function machine. For those who don’t need scanning and copying, but would like to focus on photo reproduction at up to A4, it’s still possible to get a dedicated printer, like this Stylus Photo 360 from Epson, at well under £100.


The most noticeable aspect of this machine is its large, 89mm colour LCD display, set into the middle of its front panel. This gives you a very good idea of what a printed photo will look like, when it’s taken from a camera memory card. Ranged around the display are four buttons for calling up menus, and as well the usual five button ring for menu navigation.


Below the display, under a swivelling cover, are two memory card slots which take SD, MemoryStick, xD and CompactFlash cards. To the left of these card readers is a separate socket for a PictBridge camera connection, set quite deep into the printer’s front panel. 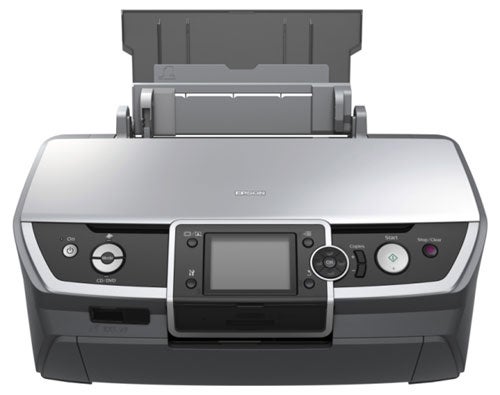 Below the card reader there’s a fold down front cover, behind which is the telescopic output tray. Pull it out and fold up a similar cover at the rear, which becomes the input paper tray, and you have the straight-through paper path favoured by Epson. A lever at the front lifts the output tray so you can use the optional CD/DVD holder for printing disc labels.


At the rear are sockets for power and USB 2.0 cables, the only connection option provided on the Stylus Photo R360.


The Stylus Photo R360 is a six-colour printer, with light cyan and light magenta inks added to the normal CMYK set. All six ink cartridges clip into the large piezoelectric head, which is a permanent fitting. It takes around two minutes to charge the heads when you first install the tanks.


Software installation is straightforward and Epson provides a number of useful applets such as its Web Print utility, which prevents the right-hand edges of web pages being chopped off.


Epson rates the printer at 30 pages per minute (ppm) in both black and colour modes. As far as we can see, this bears no relation to what you can expect to see from this machine. In normal print mode our five page text document completed in one minute 39 seconds, a tad over 3ppm. Our five-page, mixed text and graphics document took one minute 59 seconds, just under 2.5ppm. Both these speeds are slow, even for a printer intended primarily for producing photos.

We investigated a little further by printing the same five page text document in draft mode, as most printer makers quote the fastest possible print speed. It still took just over a minute to complete the print job, slightly under 5ppm. Finally, we took off the processing time within the PC and just included the time from the first page starting to move from the input tray to the last page arriving on the output tray. Even then, we couldn’t get a print speed above 10ppm.


Black text from the printer is reasonably well formed and on the standard multifunction plain paper we use for testing, produces little bleed, though there’s some jaggedness apparent on letter ascenders and decenders. Colour graphics, with text and graphics selected in the printer driver, is clean and solid and black text overprints are easy to read.


Photo output, the main purpose of this printer, is clear and well-detailed. Colours move smoothly from one shade to the next and dark shades are as well reproduced as lighter ones. The extra ink colours help with the reproduction of skies. 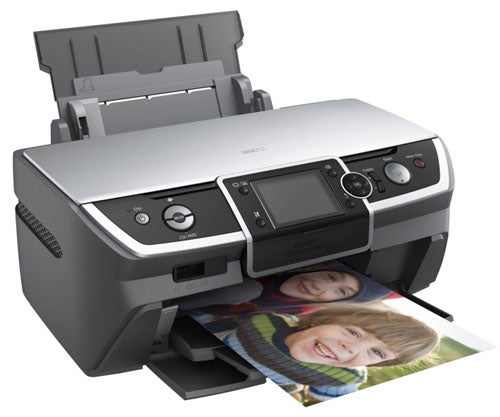 If you read printer reviews on TrustedReviews regularly, and are in the market for an Epson photo printer, you may have read our recent review of the Stylus Photo R265 and wonder why there’s a discrepancy in the running costs between that machine and this one. They both use the same inks and paper, so how can one be cheaper to run than the other?


Apart from slight variation in the number of pages we managed to print on the two machines, the key difference is in the price of inks and papers – we found them cheaper than with the earlier review. It’s always worth shopping around on the Internet for best prices on these. There are often two-for-one offers, as well, though we ignore temporary offers in calculating page costs. The R360 produced costs per page of 2.86p for five per cent black text and 51.9p for 20 per cent colour. These are on the high side, even for a machine at this comparatively low price point.


At the price, this is a photo printer which produces good photographic images. Occasional text and graphics print is also reasonable, though the Stylus Photo R360 is no tearaway. The large LCD display is a distinct bonus when selecting and modifying images directly from a memory card.