Epson’s top-of-the-range photo all-in-one has the stature to go with its price. Its large footprint on the desk is eased by a comparatively low profile. All in black – some gloss, some textured – a single silver highlight is the only relief, running all the way round the machine, about halfway up the case.


A slight bulge at the left-hand end of its top cover is the only indication of the machine’s Automatic Document Feeder (ADF) which, like other recent Epson multifunctions, reveals itself when you fold out the paper feed support. The flatbed scanner itself is sunk behind a raised rim, which contains the very wide touch-control panel. 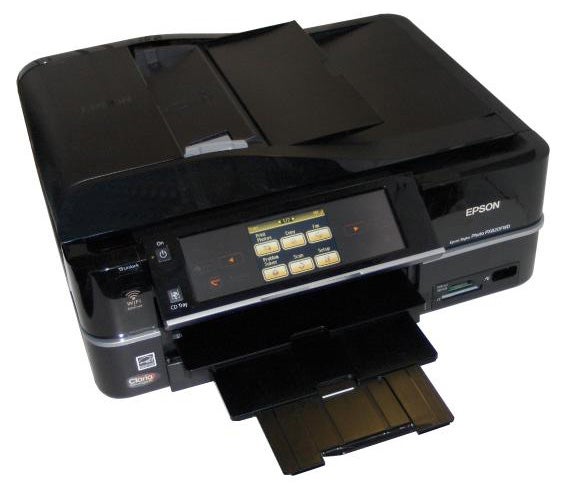 This combines an array of fixed touch-buttons, which illuminate when they are available for use, with a large 89mm LCD touchscreen. The touchscreen can show menus, instructions and large useful images from memory cards or USB drives. Both screen and panel are sensitive and you don’t have to apply much pressure to get your taps recognised.


Below the control panel is a two-tier paper tray, which can take up to 120 sheets of plain paper, underneath a further 20 photo blanks. An output support telescopes out from just above the feed trays. The printer takes in the photo tray, when you instruct it to print on that media. 120 sheets, probably more like 100 sheets of 80g/sm paper, is not very much, even for a machine aimed mainly at the home. 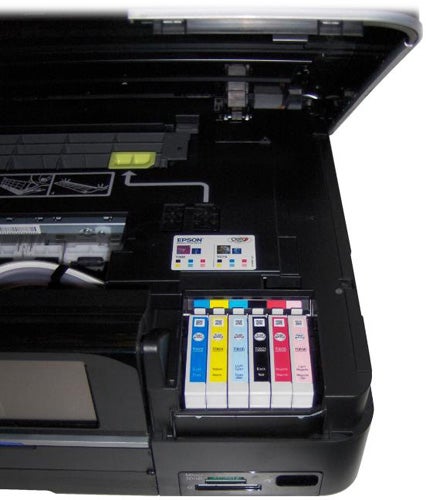 One of the few physical buttons on the control panel sets the machine buzzing away to itself, before it offers you a built-in CD/DVD holder from within its depths – direct print on discs is a standard feature.


To the right of the paper trays are twin photo card slots that can take Compact Flash and Microdrive, as well as the more standard SD, Memory Stick and xD. At the back of the machine are sockets for USB and Ethernet, but it also supports wireless connection, including both router button and passcode setup, which is quick and easy. An on-screen keypad is used for both passcode entry and fax numbers.


This is a six-colour printer and the light cyan and light magenta inks plug in beside the normal CMYK quartet, though in a fixed position, using flexible tubes to connect to the machine’s printhead.


Epson supports both Windows and OS X, though no specific mention is made of Linux. A copy of Abbyy FineReader 9 is provided, as well as Epson’s own utilities for things like printing Web pages.

As with most Epson printers we’ve tested over the years, the Stylus Photo PX820FWD is not as fast as the company claims in its literature. Speeds of 40ppm, even in draft mode, are not what you’re likely to see in day-to-day use. Printing our five-page draft text document produced a speed of 15.8ppm, which it has to be said is very good for an inkjet printer, but falls short of the spec by a good margin. 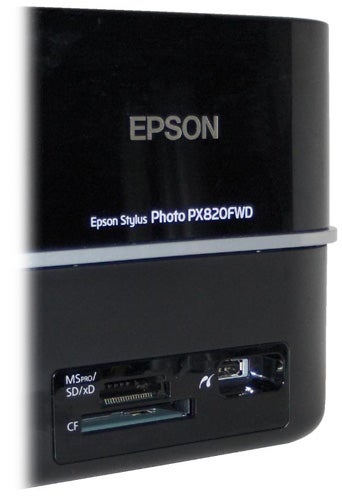 Printing in normal mode cut the speed back to 6.4ppm on a five-page document and 7.7ppm on a 20-page one. These are again very commendable speeds and you wonder why Epson has to exaggerate, particularly when compared with rival inkjets.


The black text and colour graphics test produced 6.1ppm and when we switched in the automatic duplexer, which is standard on this printer, we still saw 4.4spm. While this isn’t as fast as with the Dura-Brite pigmented inks in the Stylus Office BX625FWD – the Claria inks in this machine are dye-based – it’s still respectable, when compared with most other duplexing inkjets. 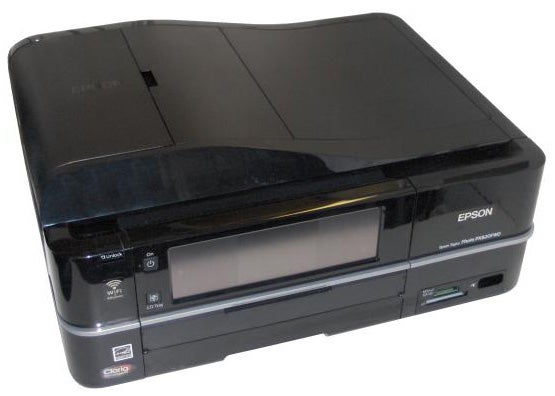 Print quality is OK, though not as sharp as with its major competitors. Text shows some jaggedness caused by ink bleed, which you can see when you look closely with the naked eye. Draft text is very light, but still readable and a fair compromise with the printer’s excellent speed.


Colour print on plain paper is reasonably bright and attractive, and on photo paper this machine, like its stablemates, continues to give some of the best image prints in the business. Colours are natural and well balanced and there are good levels of detail throughout the saturation range.


As a top-of-the-range inkjet all-in-one, there aren’t many other extras you could ask for. With duplex print, CD/DVD direct print, six colours, an ADF and wireless connection it can handle both photo enthusiast and home office work with aplomb. You do pay quite a bit for these extra facilities, though, and if you’re after top quality plain paper print as well as photos, the Stylus Photo PX820FWD may not be the ideal choice.