There’s an increasing similarity between Epson’s ranges of all-in-ones. The Photo and Office ranges, certainly at their higher ends, both include Automatic Document Feeders (ADFs) and memory card slots, but the main difference is the number of ink colours, with the Office series having four to the Photo’s six. The Stylus Office BX625FWD is at the top end of the Office range, so has most of the extras you might expect in a small business all-in-one.


The machine is a little deeper than earlier Stylus Office all-in-ones, mainly due to the fact that it has a cassette paper tray, which slides in underneath the machine, rather than the vertical paper hopper of earlier Epson machines. 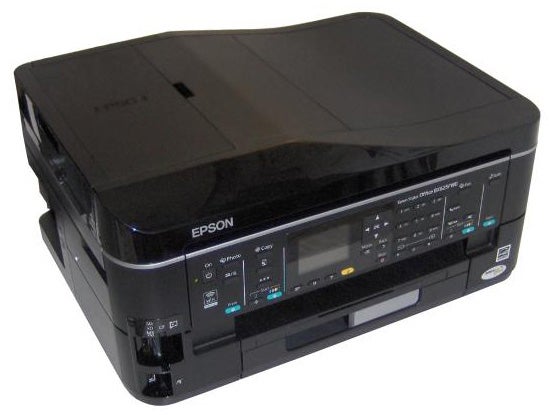 The top surface has the same fold-open technique, which gives it a smooth top when closed. When it’s folded open, there’s a 30-sheet ADF to supplement the standard A4 flatbed scanner. The paper cassette can take up to 250 sheets of A4 paper or photo blanks from 15 x 10cm, though not at the same time. The output tray pulls out from just above the cassette, with a flip-up paper stop at the front.


The control panel, which folds out to any of seven, click-stop positions, is busy with buttons. Part of this is because Epson has decided to offer separate buttons to start different kinds of jobs. There’s a button to print photos, two to start black and colour copies, two for black and colour faxes and one for a scan job.

Close to the centre is a large numeric pad and a square of cursor controls for menu navigation. The large, 63mm colour LCD is used for menus and photo preview in the normal way and there are assorted other buttons for functions such as copy enlargement and settings.


At the left end of the front panel are two card readers and a PictBridge socket, which doubles as a USB drive socket. At the back are sockets for USB and Ethernet connection and wireless networking is also supported.


Wireless setup is very simple, particularly if you have a one-click connection button on your router. Even if you need to enter a WPA passcode, though, this is made easier by the numeric pad.


This is a four-colour printer and the four cartridges slot into the head carrier in traditional Epson fashion. The machine takes two sizes of black cartridge, with the higher yield component good for over 900 pages.


Drivers for Windows and OS X are provided on the CD, as is a copy of Presto! PageManager for document management and OCR.

Epson rates the Stylus Office BX625FWD at 15ppm for black and 7.1ppm for colour and quotes a spectacular 38ppm for both in draft mode. Under test, as usual, we didn’t see these levels, but our five-page black text test completed in 35 seconds, giving a speed of 8.6ppm and this increased to 12.5ppm on the 20-page document. This was also the speed on the 5-page draft document and the text and colour graphic test returned 4.8ppm. These speeds are good for an inkjet all-in-one, faster than most in the same price bracket. 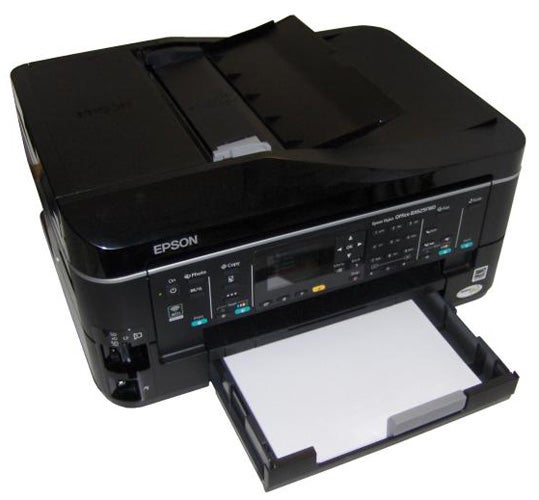 Epson also makes much of the duplex print speed on this machine, as the pigmented DuraBrite inks dry more quickly than dye-based ones, needing less of a pause between the printing of front and back sides of each page. Our 20-side document completed in 2:44, a speed of 7.3spm. Comparing this with the 3.8spm of the similarly-priced https://www.trustedreviews.com/printers/review/2010/09/07/Lexmark-Prospect-Pro205/p1 Lexmark Prospect Pro 205, Epson has a point.


A colour copy took 29 seconds and a 5-page black text copy from the ADF took 59 seconds, both of which are quicker than average. Finally, 15 x 10cm photos took from 1min 14secs to 1min 58secs, depending on source and print mode. 1min 58secs for a best quality print is better than many.


Considering quality, pages from the printer have most of the good and bad features we’ve seen before from Epson. Black text is crisp and bold, though there are occasional slight jags where one pass of the printhead is misaligned with another. Draft text is very readable, though it looks more like dot-matrix output than a fainter version of the normal font. 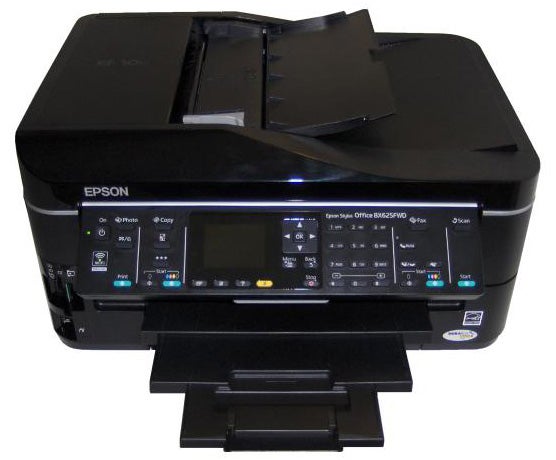 Colours are bright and eye-catching and this machine produces one of the most accurate colour copies of any inkjet we’ve tested recently. This shows the quality of the 1,200dpi scanner. Photos are also well coloured, with good, natural hues and plenty of detail from the enhanced 5,760 by 1,440 pixel heads.


Two different sets of cartridges fit this machine: the Apple series for standard yield and the Stag series for high yield. The Stag cartridges offer page counts of between 600 and 1,000 pages, depending on colour, and give ISO page costs of 2.7p for black and 7.9p for colour. These are a bit higher than even some other Epson machines. Equivalent costs for the £125 Epson Stylus BX320FW, for example, are 2.5p and 6.7p


The Epson Stylus Office BX625FWD is a delight to use and offers all the main features you’d expect from a home office all-in-one: print, copy, scan, fax and photo print. It’s fast and print quality is fair. Running costs are a little high, but overall it’s a solid SOHO workhorse.