Interest in A3 print for business continues to increase. Rumours that HP may be readying an A3 all-in-one to compete with the ones Brother has been selling for a while is also reflected by Epson’s move to sell business as well as photo-enthusiast A3 printers. The Stylus Office B1100 can handle paper up to A3+ and offers fast plain paper print, as well as four-colour photos.


As we’ve come to expect from A3+ printers, this is a wide machine – it was a squeeze to fit it on the limited space on our test bench – and with its front and rear paper trays extended for large paper print, it has a considerable footprint. 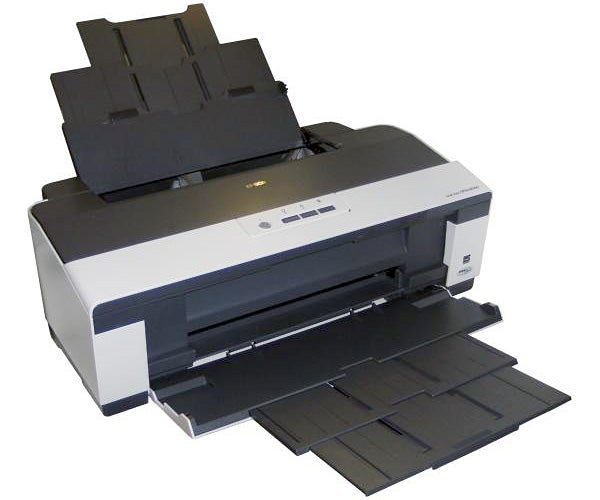 Unlike those printers intended for the photo fan, there are no fancy flat paper paths, just a conventional feed from a tilted tray at the rear to a flat one at the front. The input tray is only rated at 120 sheets of 64gsm paper, too, so if you intend to use the machine for general-purpose SOHO printing, you’ll have to restock it regularly. It would be handy to be able to load A3 and A4 paper at the same time.


The control panel is about as simple as it could be, with just four buttons and three indicators. The buttons control power, paper feed, ink replacement and job cancel while the indicators show power and data, paper out and low ink. At the back, a single USB socket is the only way of getting data into the machine. There are no facilities for networking or wireless connection. 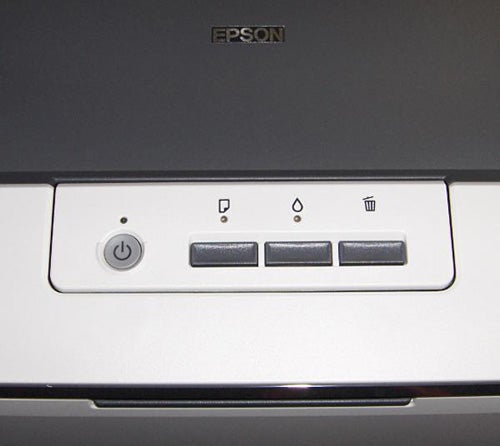 The print head carrier has room for five cartridges: cyan, magenta and yellow plus two blacks. Unlike other printers that use two back cartridges, Epson doesn’t intend one for plain paper print and the other for photos; they’re identical.


The idea instead is that the twin black cartridges increase the page yield and both are used equally for printing black text. They can be bought in a twin pack – the one with giraffes on the front. From an ecological point of view, a single cartridge with more ink in it would be a better solution.


Driver and supporting applet installation is straightforward and there’s support for both Windows and OS X, though there’s no indication of any for Linux.

Epson has taken the useful step of quoting both silly proprietary speeds and ISO speeds. Using the ISO ratings, it claims 13ppm for black print and 5.3ppm for colour, both on A4 paper. Our five-page black text print returned a speed of 9.1ppm and in draft mode, this increased to 10.3ppm. With the 20-page normal mode text print, we saw 12.2ppm, very close to the rated speed and fast for any inkjet printer.


Colour print wasn’t as speedy, though. Our black text and colour graphics print returned a speed of 3.1ppm, though again you could expect an increase on a longer print run. The equivalent five-page print on A3 paper took 3mins 12secs, which is reasonable for this class of office printer. 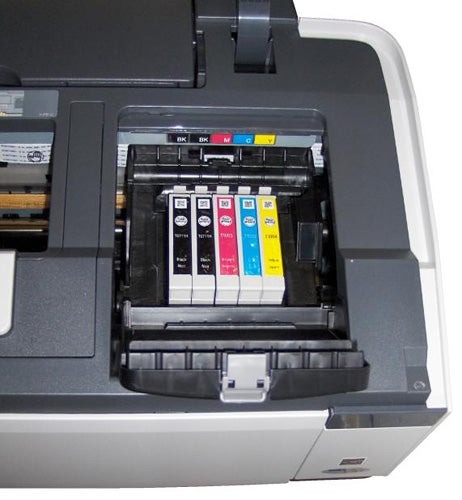 
A 15 x 10cm photo on A4 paper took 2mins 13secs in best photo print mode, which is slow by photo printer standards, but a full-size A3 print in normal photo mode took 4mins 48secs, which compares well with other medium format printers we’ve tested. 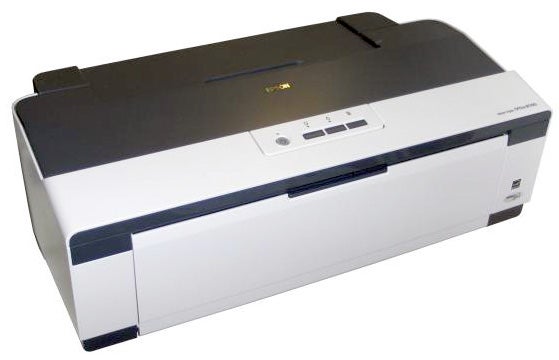 The quality of the prints we saw is about the same as from an Epson A4 printer. This means that text is not as smooth as from most of the company’s major rivals, with some jagged edges to characters visible to the naked eye and a certain amount of ink bleed into the paper.


Draft print is lighter and more dotty than normal print, though could be used for internal drafts. Colour graphics are well reproduced, with no visible banding, though some dither patterns are apparent. Colours are good on plain paper and very good on glossy photo paper. Our test photos were clean and well detailed, showing good reproduction in darker areas and smooth transitions from one colour to another.


The rhino and giraffe inks (named after the pictures on the packaging) are relatively high-yield and give costs of 3.2p for black print and 6.5p for colour. The black print cost is relatively high, even for an A3 printer, but the colour cost is very respectable and should mean you can use colour print more freely.


If you need A3 print on a day-to-day basis in a small or home business, this is a very economic way to get it. Epson’s Stylus Office B1100 is quick and reasonably cheap to run and although black text print quality isn’t the best, for most SOHO purposes it will be more than adequate.