You could be forgiven for thinking that all all-in-one machines are designed specifically for printing photos. While many are, some devices are still marketed as general-purpose home or small office, multifunction machines. That’s what Epson’s Stylus DX7000F is, and its low asking price reflects its position in the market.


The machine has a conventional layout, with a flatbed scanner mounted above the print engine. Paper feeds from a hopper at the rear to a fold-down tray at the front. There’s a control panel on the left-hand side of the device’s top surface and an oversize, spring-loaded cover on the front surface reveals two memory card slots, which between them cater for all the common types.


The control panel, which includes a number pad for the machine’s fax facilities, also includes special function buttons for copy enlargements, printing from memory cards and working with faxes. There are smaller buttons to select paper size and text or photographic prints and two large Start buttons for initiating black and colour print, together with a Stop button to cancel a running job. 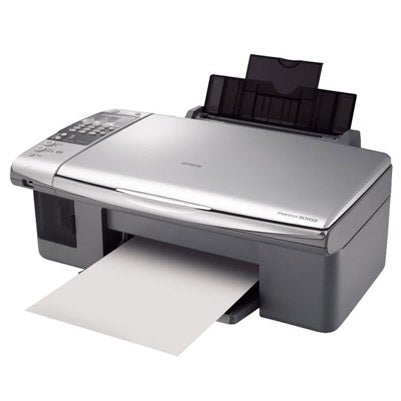 The Epson web site describes the machine as having a two-line LCD display, but in fact it’s only a single line of 16 characters. This means that, if you choose to print from a camera’s memory card, you have to print an index sheet first, mark it up and re-scan it to select the images you want to print. You’ll use less ink if you print via PictBridge and make selections using your camera’s LCD display.


Hardware setup on this machine is very simple. You lift the scanner section to reveal the permanent print head carrier, which takes four, separate ink cartridges. Once the ink has been charged, and the comprehensive software suite has been installed from the supplied CD, the machine is ready to print.


Software includes Optical Character Recognition from ABBYY and Epson’s own Creative Suite, which covers all the basic functions for a device like this.


The Stylus DX7000F isn’t a quick all-in-one. Although Epson rates it at 27ppm for both black and colour print, you should really ignore those figures. Our five-page text file took 1 minute 55 seconds to print, giving 2.6ppm. We tried it in draft mode and the speed went up, but only to around 9.4ppm. Even if you exclude the page preparation time, this machine isn’t going to come close to 27ppm in normal use.


Print quality of black text isn’t at all bad, though there’s a little spread into the paper nap. Graphics printing is also fair, though areas of solid colour, such as in business charts, aren’t all they might be. There was a repeating fault in parts of our test print, which produced a horizontal bar across one of the graphics. A photocopy of this sheet, taken on the machine, was reasonable, though the normal lightening of colour shades was still evident.


Photo prints, which you wouldn’t expect to be as subtle as from a six-colour machine, were reasonable. Some reds are a little overemphasised and pale shades tend to white, through lack of light cyan and light magenta inks. 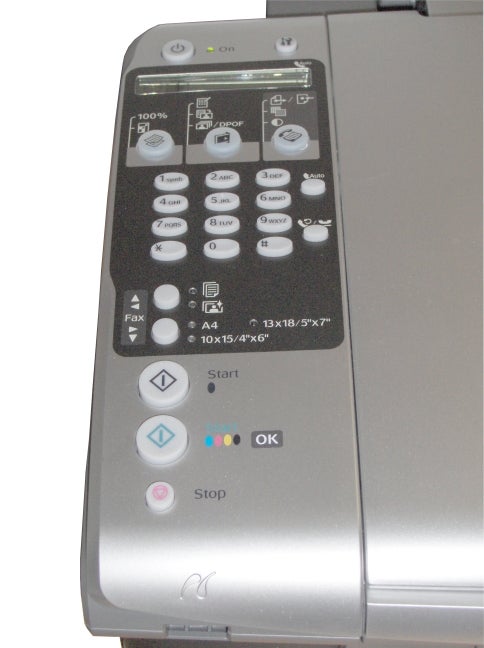 During our tests, several pages were marked along their leading edges by parts of the feed mechanism. We have to hope this is an isolated problem with our review sample, as the damaged pages have noticeable nicks, which for many purposes would make them unusable.


Epson quotes page yields using the new ISO test pieces, just becoming available. Until all manufacturers quote yields using this standard, we’re sticking to 5% per colour yield tests and here we managed 300 colour pages, but only 210 black ones. In both cases the printer refused to continue printing, even though we could see no degradation in print quality.


Working with prices for the four-cartridge multipack, which is the cheapest way of buying ink, we calculate a cost per page for 5% black text of 2.49p and for 20% colour of 40.3p. The black text cost is a little on the high side, but the colour print cost is lower than from other inkjet printers and all-in-ones in the same price bracket.


We weren’t as impressed by this machine as we have been with other Epson all-in-ones. On almost all print jobs, it’s pretty sluggish and the nicks the paper feed mechanism puts into printed sheets detract from the otherwise reasonable print quality. Although it’s reasonably cheap to run, particularly when printing colour, there are rival machines to this one from other manufacturers that offer better value from money.