Transparency adapters used to be available only in expensive, high-end consumer scanners and those for professional and semi-pro customers. More and more devices intended for home and small office use now include them, though, and Epson’s Perfection V330 Photo can be had for well under £100.

The scanner has a slightly unusual design, with a curved top narrowing to the left and a step at the front offering four control buttons. The scanner lid opens sideways from left to right and originals for scanning are, unusually, laid down with their top edges towards the front of the scanner. The lid has extending hinges, so the scanner can cope with bound originals, such as magazines and books. 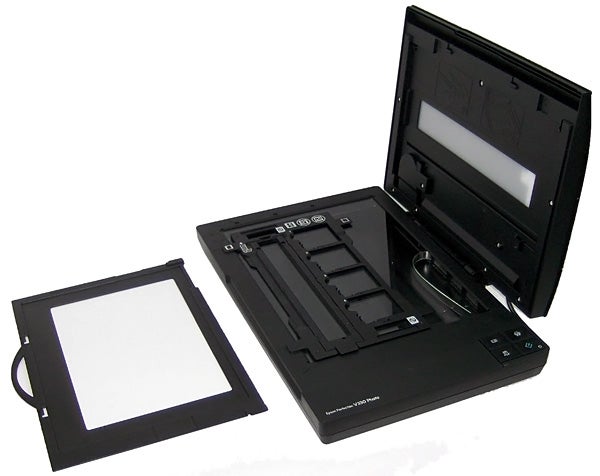 The four control buttons are for power, copy, e-mail and PDF creation and each of these is linked into the appropriate parts of the software bundle Epson supplies. Just to the right of the controls, at the front of the right edge of the scanner, are sockets for low-voltage power and USB connection. Because of the transparency adapter, the scanner can’t be run off USB alone, but it’s a shame the sockets are positioned right at the front, as the cables have to run down the side of the scanner, rather than connecting unobtrusively at the back. 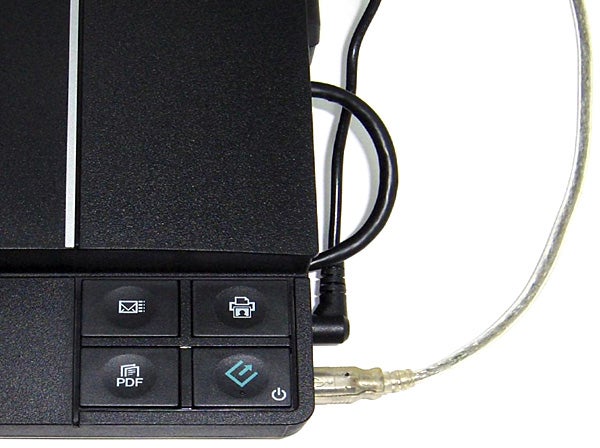 There’s no lock to the scanner head carrier, but it doesn’t seem to come to any harm when being transported. The Perfection V330 Photo uses a CCD sensor and white LEDs for illumination, which means it has no warm-up period to speak of though, as we’ll see, this doesn’t make it that quick off the mark when scanning.

Epson provides a solid suite of support software for this scanner, which includes both Arc MediaImpression for media housekeeping and ABBYY FinerReader Sprint for Optical Character Recognition (OCR). This is a good general-purpose application for extracting editable text from printed pages and it works directly to produce a formatted Word document.

The photo handling within MediaImpression offers automated corrections such as lighting changes, redeye removal and improvements to complexions. The automatic noise removal is a bit heavy-handed, but you can get in and make changes manually. There’s also a stitching program from Arc, to handle panoramas from a series of photos.

Epson claims 29s for an A4 colour scan at 600ppi, which is reasonable, given that our A4 greyscale scan at 300ppi took 32s and that was with OCR conversion into Microsoft Word. ABBYY FinerReader Sprint does well with this and managed to maintain font sizes and basic layout on the test page we used.

It took 15s to scan a 15 x 10cm colour print and the results were generally good, though we did notice colours were a little lighter than from some other devices we’ve used and reds came through slightly orange.

It did a good job on the MTF test, which shows how quickly the scanner can cope with changes from black to white through a series of fine parallel lines. The white background between the lines comes through almost white and there are no artefacts of halfwidth lines. 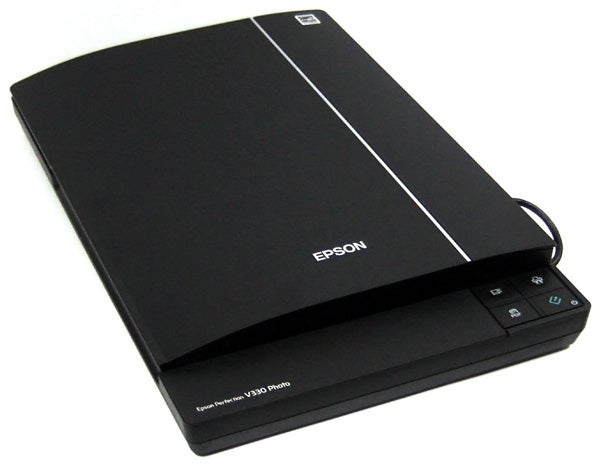 The Q-60 target showed the same lighter reproduction as in the test photograph and this is slightly closer to the original target, as well.

The Perfection V330 Photo can scan up to four 35mm transparencies or a strip of up to six negatives using a holder that is laid on the flatbed in one of two orientations. Removing the white support pad in the scanner’s lid reveals a light source set into it which shines through transmissive media.

Scanning a 35mm IT8 target at the scanner’s maximum optical resolution of 4800ppi produced colour swatches that were close to those from reflective media, though the very lightest colours were burnt out to near-white.

This is a good general-purpose scanner for home and photo enthusiast use. Scanning quality is marginally better than from some other flatbeds we’ve looked at recently and the inclusion of a transparency adapter improves the versatility of what the machine can do. It comes with a good range of software, but cabling could be a lot tidier.