Ladies and gentlemen, today is the day when projectors get fun. Or at least that’s what Epson wants us to believe as we take delivery of the brand’s MG-850HD.

Why is Epson so convinced that the 850HD is perfectly positioned to overturn our previous conception that using a projector is predominantly a fairly serious AV pursuit? Because the 850HD is the first projector ever launched in the UK to sport a built-in iDock.

Yes, push a little panel in the centre of the projector’s rear, and a cute dock pops out onto which you can mount you iPhone, iPod or even iPad. The idea being, of course, that you can then play any videos or photos stored on your iDevice through the projector at the sort of image sizes usually only found down at your local Odeon.

Actually, you can also play music too. For in recognition of the fact that the main thing most people have tucked away on their Apple devices is music, the 850HD carries a promising 10W worth of speakers on its rear panel, to either side of the docking station.

The need to incorporate a dock and uniquely (by projector standards) heavy duty speakers in the 850HD ensures that its design is very unusual. It actually feels like it’s all the wrong way round, with a stylishly curved bit on the unit’s rear, while the off-centre lens is housed on a rather plain-jane fascia.

It’s not an unattractive piece of kit overall, though, given its ‘novelty’ value. And we were also pleased given the 850HD’s fundamentally casual nature to note that it’s got a reasonably sturdy carry handle which folds away around the projector’s side when you set it down for use.

The fact that the the 850HD is capable of handling iPads as well as the more manageable iPod and iPhone kit is quite a boon, and we were pleased to note that even our resident first generation iPad – which is, of course, considerably heftier than the newer model – rested reasonably stably on the dock, without raising fears about it either tipping off or putting undue strain on its ‘dock slot’.

As well as the dock, a pop-off cover on the projector’s right side reveals a few other more standard connections. Namely an HDMI input, a composite video input, a D-Sub PC port, a stereo audio input, a USB port through which you can play photo slideshows, a component video input, and even a 3.5mm microphone input. Which raises frankly terrifying karaoke possibilities…

Even a cursory examination of the 850HD’s internal specifications reveals pretty definitively how Epson imagines its projector will be used – namely, in bright daylight environments or with your lights on. For its claimed maximum brightness output of 2800 Lumens is almost unbelievably bright for a sub-£600 projector supposedly aimed at anything other than the data presentations market, while its 3,000:1 claimed contrast ratio doesn’t on paper chime with the figures usually associated with quality movie viewing.

Setting the 850HD up reveals that it doesn’t have any vertical or horizontal image shift, meaning you have to adjust the angle of the lens up or down using either a drop-down leg on the projector’s front or a pair of screw down legs to its rear. If you can manage to get an image in the right place on your screen (or wall, given this projector’s casual nature) without using any of the angling tools, though, we suggest you do. Because otherwise you’ll have to call into play the projector’s keystone adjustment features, which inevitably lead to a distortion of the image.

That said, Epson has provided a physical ‘slider’ mechanism on the projector’s top to make adjusting keystone simple, and there’s also an automatic vertical keystone adjustment feature built into the projector’s menus as well. 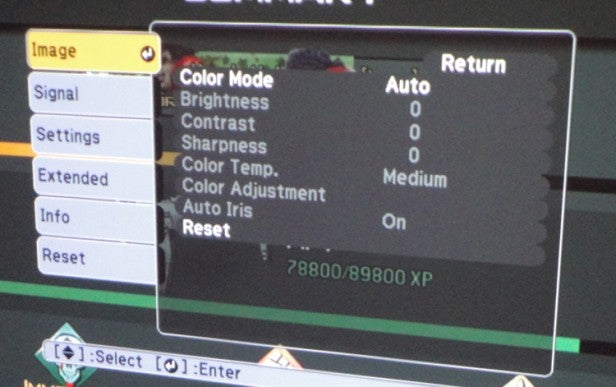 These menus are pleasantly presented and well organised, and there’s a surprising amount of image adjustment flexibility for such an affordable projector. You can, for instance, adjust the hue, saturation and brightness of all six of the primary colour elements, as well as being able to turn on or off an automatic iris, and introduce various degrees of noise reduction.

While we guess it’s possible to admire the purity of the 850HD’s ‘vision’ as a product, though, it’s rather less easy to admire its picture quality. For as we’d expected would be the case from its extremely brightness-biassed spec sheet, its images aren’t exactly in line with what we usually like to see from a home entertainment projector.

The biggest single problem is that the 850HD’s black level response is pants. In fact, it’s misleading to even use the word ‘black’ in relation to the 850HD’s pictures, for in truth the darkest colour it can manage is a milky grey.

This remains the case even if you take down the brightness setting as far as you can before all shadow detailing disappears, and even if you use the Cinema preset (which automatically switches the projector’s lamp into its relatively low-brightness Eco mode). 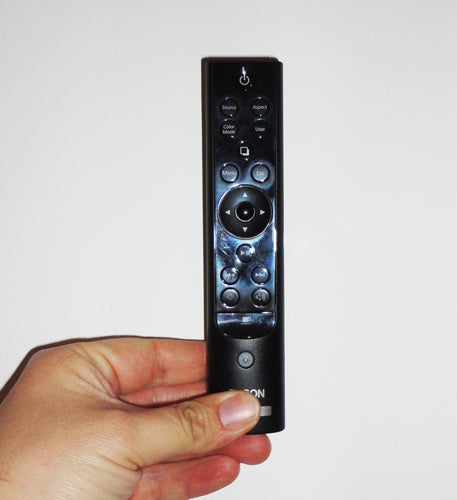 The inability to produce an even half-credible black leads to other problems too. It means there’s a real shortage of shadow detail during dark scenes, and it also means that colours during dark scenes struggle to look natural. Instead they tend to look ‘shifted’ into the sort of colour range usually occupied by PC data signals. Flesh tones, in particular, look over-wrought and generally rather sickly.

One specification we neglected to mention earlier is the 850HD’s resolution. For it’s only an HD-Ready 720p affair rather than a full HD one. And either because of this or because of the presumably very cheap optics inside, the 850HD’s presentation of HD sources is disappointingly soft. There’s nowhere near as much detail and clarity in HD images as we would expect to see even with a very cheap projector. In fact, even with usually easy-to-handle fare like Call of Duty on the Xbox 360, the HD image loses so much resolution versus how it looks on other projectors that it actually looks more like a standard definition picture.

Connected to this issue is the fact that you can fairly clearly make out the physical pixel structure of the image if you sit at all close to the screen.

At this point, we should state that we’ve been watching the 850HD in the dark. So arguably we’ve not been using it in the way it was intended. But so far as we’re concerned, if you’re going to spend £600 on a projector, there’s a good chance you might want to use it in a darkened environment for at least some of the time. Yet here using it in the dark really won’t do you any favours at all.

Which wouldn’t be so bad if its daylight performance was the bees knees. But it’s not.

To be fair, some things look better with the lights on. Colours look a little more natural, and the way the light in your room ‘dilutes’ the light coming out of the projector en route to the screen makes it easier to forgive the projector’s innate lack of black level response. Plus, of course, the projector’s extreme brightness comes into its own by leaving the image looking much more dynamic than it would in ambient light if you were using the sort of more contrast-rich projectors usually favoured for home cinema use.

However, the dynamism only really exists with ‘peak’ parts of the picture, so unless you’re going to be watching a full-time diet of bright, colourful animation, you’re never going to be able to enjoy a convincing all-round contrast performance from this projector, regardless of whether you watch in a bright or dark room. 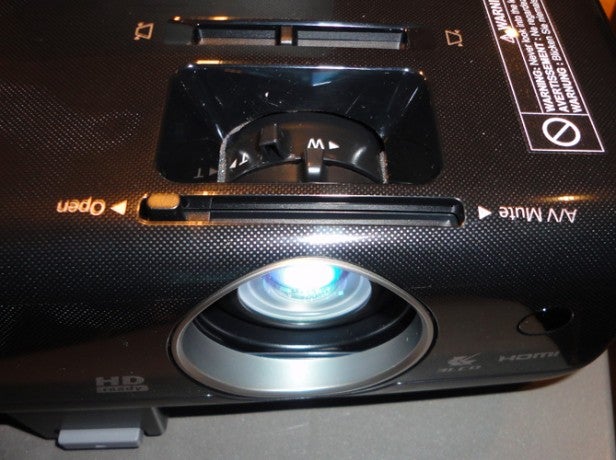 Having focussed on Blu-ray and Sky content so far, we dutifully popped our iPad onto the dock to see how the 850HD fared with that. And initially we were rather impressed, as the projector immediately and effectively took over control of the tablet, allowing you to access its photos, videos and music files via the projector’s menus and the rather cute little remote Epson provides. Choosing a song to play, meanwhile, not only plays the music, but also calls up both the song and album title, and even the artwork for the song/album if you’ve got it on your iDevice.

Alternatively, if you want to feel ‘greener’, you can turn the lamp off and still enjoy sound through the integrated speakers.

We were rather surprised to find that the sound from the built-in speakers was rather good. Or at least, it is much, much better than the tinny, mono nonsense you tend to get with most built-in projector speaker systems. In fact, we’ve heard a few cheap and cheerful dedicated speaker docks that sound worse than the reasonably clean, passably-rounded sound that emerges from the 850HD’s speakers.

Watching videos and photos stored on our iPad, however, proves to be another source of disappointment – albeit a more forgivable one. The thing is, thanks to Apple only allowing a 480i signal out of its digital docking slot, this is all the projector gets to work with. So all those lovely high res photos and potentially HD videos you’ve got stored on your iDevice end up looking really quite rough through the 850HD, with jagged edges, very limited resolution and obvious softness. Not to mention the slightly off colour tones caused by the contrast issues mentioned earlier.

What’s more, while these sort of issues would apply to any video docking system, the fact that they’re being shown at sizes as large as those deliverable by the 850HD just exaggerates the flaws.

Verdict
Maybe, you’re thinking, we’ve taken everything a bit too seriously here with our consistently negative tone. The 850HD is just meant, as we said right at the start, to be a bit of fun, right? Well, maybe. But here’s the thing. For all its ‘fun’ status, let’s not forget that the 850HD costs £600. And we honestly believe that anyone – not just movie fans, or AV obsessives, but anyone – who buys it will ultimately feel disappointed by its performance, no matter what they’re watching, or what type of environment they watching it in.