I might as well say right from the off that this is probably the single weirdest review I’ve ever done for TrustedReviews. And if that hardly sounds like a ringing endorsement of the ‘weird’ product in question, Epson’s EMP-TWD10, then actually I’ve got the opening tone pretty much right!


The TWD10 is an LCD projector with a DVD player built in. On the surface, this sounds innocuous enough; where’s the harm, after all, in having two bits of AV kit built into one box, saving space and reducing cabling?


However, while the idea of reducing clutter might sound logical enough, when you actually think more in-depth about what the TWD10 is proposing – or especially when you actually try to set the thing up – the whole concept starts to crumble.

Before we start explaining why this is so, it will make our arguments easier to follow if we first give you a sense of what the TWD10 brings to the table in terms of design and specification.


The projector itself is a rather novel-looking item, being almost cubic in shape and sporting a bold two-tone finish, with gloss white on the top two-thirds and black for the bottom part. 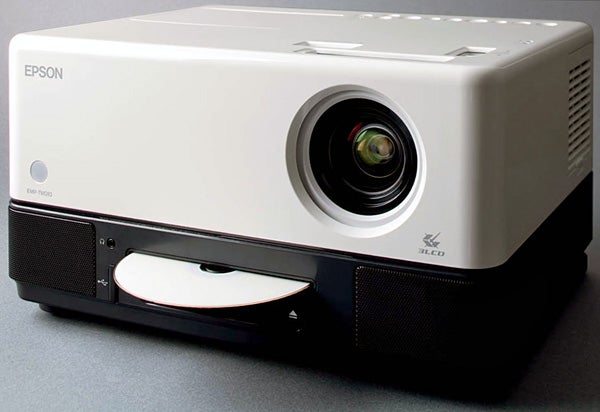 This colour difference delineates the projector part – the white bit – from the DVD part underneath. And this delineation is particularly important for the novel reason that the whole projector section can rotate anti-clockwise on the DVD sub-section, to help you out if you’re needing to position the unit to the side of your screen.


Also helping out during set up are excellent vertical and horizontal image shift ‘wheels’ built into the projector’s bodywork, as well as keystone correction to help you get the sides of images straight if you don’t have the projector exactly in line with the centre of your screen.


The TWD10’s curious position as an AV source as well as an AV display also affects its connectivity. For alongside the expected HDMI (v1.2 only, sadly), component video and D-Sub PC ports, you also get such projector novelties as a phono output for a subwoofer, a headphone jack, and an optical digital audio output so that you can ship digital audio from the DVDs the TWD10 plays to your AV receiver, if you have one.


It’s these sound-centric connections that bring to the fore my practical concerns about the TWD10 concept. Clearly if you’re going to play DVDs in the TWD10, the sound from them is going to have to come out somewhere. Hence the audio connections we’ve just mentioned, as well as the presence in the TWD10 of speakers pumping out 4 x 5W (coo) of audio power.


Yet if you use the speakers in the projector, you end up with a completely bizarre situation where the soundtrack of the film you’re watching is coming from the projector (potentially at the side or potentially even behind you!) while the pictures are appearing on a screen potentially metres away. Even if you can get the projector positioned in front of you and still get a large image from it, this audio ‘dislocation’ is so severe that it makes the annoying lip-synch problems sometimes experienced with display technology look positively puny.

It doesn’t help the sense of audio being displaced from the video that the speakers are hardly the most powerful in the world. And so you find yourself sat there watching a massive image while listening to puny sound coming from the other side of the room in a total AV mismatch.


One solution to all these problems, of course, would be to pipe the sound out to a separate AV receiver and speaker system. Except that we seriously doubt that the sort of person likely to be interested in a clutter-busting TWD10 will have a separates audio system lying around the place.


Plus, of course, getting sound out of the TWD10 into an AV receiver means introducing a cable to the supposedly clutter-free proceedings. And potentially quite a long cable at that, as the majority of AV receivers do not tend to be parked next to a projector.


Probably the best way to marry sound and vision sort-of-together with the TWD10 is to use the headphone socket. But even this is still no substitute in my humble opinion for sound that actually appears to be coming from the same location as the picture. Plus it makes watching a film on the TWD10 a distinctly anti-social activity, rather than the communal one many potential TWD10 owners might want to employ it in. 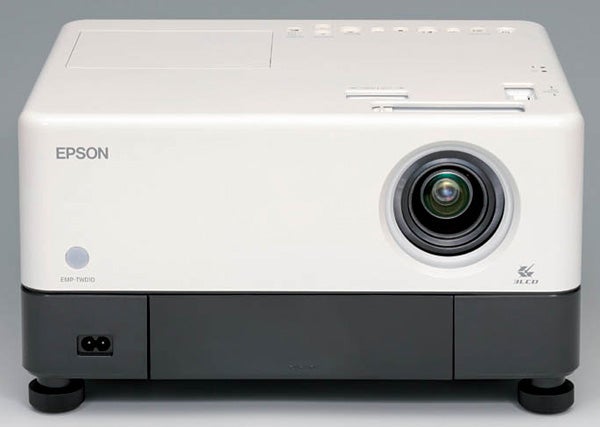 If your AV demands are really unsophisticated enough that nothing I’ve said about the TWD10 so far has put you off, then I guess that yes, its combi design could offer a bit of fun when playing console games or watching sporting events, especially with a few mates and a lot of beer in tow.


But even if your tastes really are that unsophisticated, do you really want to spend the best part of £700 on making your unsophisticated dreams a reality? As I started this test I actually felt that the TWD10’s £695 asking price looked extremely good value, especially as it includes an 80in screen. But now I’m not so sure.


Philosophical objections over, let’s move on to the TWD10’s performance-related specifications. The projector part is, thankfully, an HD Ready LCD affair, with 1,280 x 720 pixels of resolution. Its brightness is surprisingly good at 1,200 ANSI Lumens max, too, and there are a selection of thematic picture presets, such a Game and Theatre Black.


However, it’s pretty limited looking in other specification areas, with, for instance, no dynamic contrast system on hand to help boost black level response. It’s hardly surprising from this that Epson doesn’t quote a contrast ratio for the projector on its website, and reckoned it couldn’t find such a figure when I asked them directly…

When you’re getting an 80in screen, an HD Ready projector and a DVD player for this kind of money, I hadn’t expected a great deal from the TWD10’s performance. And it pretty much lives down to my expectations.


Focussing first on the projection section, the problems start with black levels, which are the worst I’ve seen for a long time, truth be told. The amount of tell-tale grey clouding is really quite prodigious during dark scenes in the Sky HD showing of ”Blood Diamond”, such as the one where Archer spies on a rebel camp at night.


As well as forcing you to strain your eyes through this ‘mist’ to make out what’s going on, the greyness makes dark scenes feel flat and tonally different to the film’s bright scenes.


Also below par by today’s increasingly exacting standards – even at the budget end of the market – are the TWD10’s colours. Skin tones tend to look orangey even using the Theater Black preset; blacks look crushed; and brighter, more richly saturated fare such as daylight jungle shots or the scene of the rebel assault on Freetown look washed out and sickly. 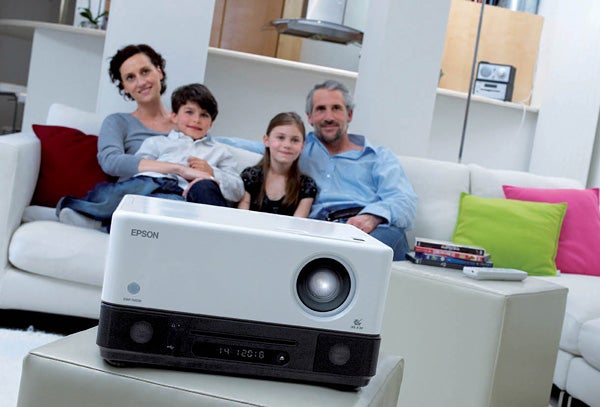 The picture also looks rather soft and lacks detail for an HD Ready projector, suggesting that neither the TWD10’s optics nor its scaling processing are up to much. It doesn’t help in this regard that motion in the picture can look rather blurred too, especially when watching standard definition from that built-in DVD player.


One final moan would be that every now and then – usually over ”Blood Diamond’s” shots of bright African skies – I became vaguely aware of a cross-hatch pattern in the picture caused by the structure of the LCD panels at the TWD10’s heart.


With the TWD10 also running extremely loudly with the lamp set to full (and still sounding a bit distracting with its lamp set to Eco), it’s actually quite hard to find any thing really positive to say about its projection performance. I guess it doesn’t suffer with the rainbow effect that plagues projectors using rival DLP technology, and it can look quite decent with fairly pallid sources, such as Tim Burton’s deliberately washed out style for ”Sweeney Todd”. But that’s about it.


Maybe the DVD player can offer a little solace? Well, I suppose it doesn’t do anything really wrong. There are no majorly overt MPEG decoding artefacts to contend with, for instance, and detail levels are respectable. It also seems that the TWD10’s image processing is rather more adept at upscaling standard definition to its HD Ready resolution than it is at downscaling Full HD sources.


But contoured edges look a bit stressy and noisy, and at no point does anything the DVD deck do manage to miraculously put right the various flaws in the projector’s picture performance.


Although the EMP-TWD10 sounds like an intriguing proposition on paper, in reality it’s hard to imagine it offering much practical value to many people at all. And without practical value there’s nothing to make us more tolerant of its antiquated performance level. Which makes it feel like rather a waste of time, all things considered.