A few weeks ago I found myself surprisingly impressed by Epson’s EH-TW3800 projector – a mid-range model that finally proved to me that Epson could cater for a dedicated home cinema room as well as the casual user’s living room.


So it’s with some expectation that I find myself setting up Epson’s current flagship home cinema LCD projector, the EH-TW5800.


It seems to me that a productive way to start is to check out how it differs, if at all, from its cheaper TW3800 sibling. 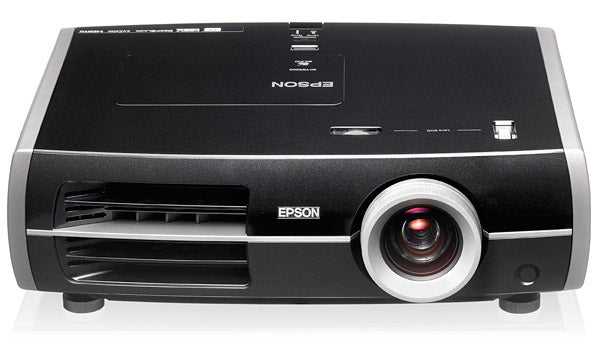 Aesthetically, the main difference is that the TW5800 is black while the TW3800 was white. Otherwise, they both sport the same rather serious looking, angular, almost industrial design. If I had to pick between the two models on looks, I’d probably go for the TW5800 on the grounds that its black contrasts more strikingly with the silver of the lens barrel and various bits of trim.


The TW5800 also shares the same substantial footprint as the TW3800, and appears to have used the bulk to similarly good effect in suppressing operating noise, which is quoted at the same low level of 22dB (using the most energy-efficient settings).


The TW5800’s connections are the same as those of the TW3800 as well; no bad thing, since this means you get highlights of two HDMIs, a D-Sub PC port, a 12V trigger output, and even the means to wire the projector to an external power switch.

The TW5800 also has the same Full HD resolution as the TW3800 – and so by now I’m guessing that you’re wondering exactly where the differences are going to come from that justify the TW5800 selling for a cool £1,400 more than its mid-range brother. But fear not – as well as carrying a superb five-year lamp and projector warranty versus the TW3800’s three-year offering, the TW5800 really does have an important set of differences tucked away on its spec sheet.


Probably the most instantly striking of these is the huge ‘leg up’ it’s got in the contrast department. For while the TW3800 claimed a dynamic contrast ratio of 18,000:1, the TW5800 ups this – with the help of DeepBlack processing, new 12-bit D7 C2Fine LCD panels and an improved E-TORL lamp to minimise light leakage – to a mammoth 75,000:1. Clearly this raises hopes of a truly substantial improvement in the key black level department.


Also potentially crucial in boosting the TW5800’s picture quality is its promising claimed max brightness output of 1,600 Lumens. Couple this brightness with the contrast claims, and we could be looking at one of the most dynamic pictures we’ve seen at the £3k or so level of the market. Provided the figures are remotely ‘real world’, that is…

The TW5800 features a big step up in video processing power over the TW3800 too, by carrying the HQV Reon VX engine. And it boasts a useful anamorphic lens mode for use with third party anamorphic lens options.


One further key justification for the TW5800’s price hike over its mid-range sibling is its provision of frame interpolation processing. As the name suggests, this processing figures out the content of extra image frames that it can insert into the image stream in order to make motion look much crisper and smoother.


Although the TW5800 contains bags of picture adjustments, some of which we’ll cover briefly in a moment, it’s actually sublimely easy to set up. This is chiefly thanks to a superb x2.1 zoom lens, and bags of both vertical and horizontal image shifting, making it easy to get an image perfectly positioned on your screen in a wide variety of room sizes and shapes. 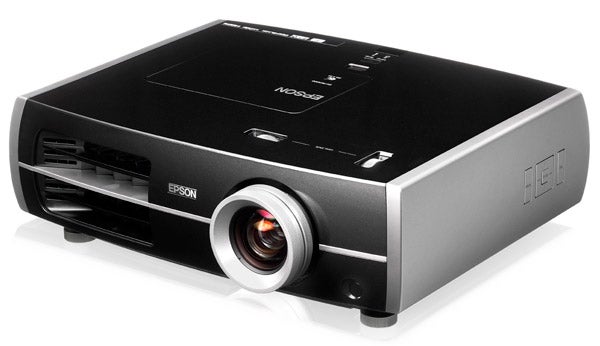 Beyond this basic level of setup, you can choose from a decent and effective selection of image preset options, or get involved with all manner of manual fine-tuning if you’re feeling confident. There’s a very flexible and reasonably user-friendly colour management system, for instance, as well as simple colour temperature and gamma adjustments. You can choose not only if you want the dynamic iris system in play, too, but also whether you want it running in a normal or high-speed mode.


Then there are skin tone adjustments; lamp output adjustments; an optional contrast booster; separate standard, mosquito and block noise reduction routines; and the facility to adjust the strength of the frame interpolation system between off, low, normal and high.


If you’re worried that all of these set-up options are going to bewilder you, then you should note that the projector is built to ISF specification, meaning that an approved Imaging Science Foundation expert can come in to your home and professionally calibrate the TW5800’s picture to precisely suit your room environment. For a fee, of course…

Heading into the projector’s performance, the frame interpolation system proves to be, frustratingly, both the best of things and the worst of things. By which I mean that it can be both mesmerisingly effective and aggravatingly distracting.


It’s at its most effective with high definition – particularly 24p Blu-rays. With these, the extent to which the projector reduces motion judder when using the processing’s Normal or High modes is at times quite amazing. A great example of just how startlingly powerful the system can be occurs in the BodyWorlds exhibition in ”Casino Royale”. This scene is full of camera pans and crowds of people moving around in all sorts of different directions, but the processing succeeds in making everything cross the screen with silky smoothness.


As well as making the picture look noticeably clearer and sharper, this impressive effect really helps pictures look more three-dimensional and the film world thus more immersive. Honestly, the system is sometimes nothing short of spectacular.

Unfortunately, though, a bit too often for comfort, the mesmerising effect of the frame interpolation processing is shattered by a processing glitch. These come in three forms: a shimmering halo around objects that ‘glide’ across the screen; the occasional stutter; and most commonly, a flickering effect over really fast action like flailing fists or running legs.


With standard definition the processing’s negative side effects crop up markedly less, though the benefits it brings are slightly less extreme, too.


The bottom line is that the TW5800’s frame interpolation system is on one level arguably the most effective I’ve seen on a projector costing anything less than monopoly money. But ironically its very effectiveness makes its glitches when they occur all the more noticeable.


For me this makes the frame interpolation very much a matter of personal taste. But I have to say that ultimately I personally preferred to leave the system switched off, at least while watching HD films – even though I felt genuinely aggrieved to be missing out on the many positives the system brings to the table.

Turning to other aspects of the TW5800’s pictures, things are much less controversial and generally rather brilliant. Fine detail levels and sharpness with HD sources, for instance, is exemplary, with immaculate edging, a great sense of depth, and effortless rendering of all the lovely textures in clothing, faces, background walls and so on that are HD’s trademark.


The picture is also extremely dynamic, achieving much greater extremes of brightness and darkness within the same frame than the TW3800 was able to deliver.


Actually, the darkness mentioned in passing back there is pretty extraordinary. Blacks really look black, with practically no trace of the grey misting effect always witnessed elsewhere to some extent with LCD technology. In fact, I have no hesitation in declaring the black levels produced by the TW5800 to be the deepest and most convincing I’ve ever seen on any LCD projector – including Panasonic’s PT-AE3000.

This fact largely demolishes one of rival DLP technology’s biggest traditional advantages over LCD, and in doing so lends more weight to LCD’s own traditional advantage of a complete freedom from DLP’s common rainbow effect, whereby some people see stripes of red and green colour flickering around the periphery of their vision.


While I’m on the subject of technology-specific issues, I’m happy to report, too, that the impressive clarity of the TW5800’s pictures is achieved without a trace (on my 100in screen, at least) of the old chicken wire crosshatch effect that used to be associated with LCD projectors.


Yet more good news concerns the TW5800’s colours. These are superbly consistent and effortlessly natural for 99 per cent of the time, even after minimal calibration. They also enjoy immaculate blends, at least with high definition material, and hold on to a fine level of subtlety even during dark scenes, thanks to the projector’s groundbreaking (for LCD) black level work.

Aside from the issues covered regarding the TW5800’s frame interpolation system, there are only one or two other, relatively minor problems I need to raise with the TW5800. First, while very quiet overall, the projector’s optical system can chunter a little at times, a bit like a booting PC. Second, the darkest parts of its pictures don’t retain quite as much shadow detail as they do on the best DLP rivals – such as the slightly cheaper InFocus IN82 and, especially, the superb £4,000 IN83. 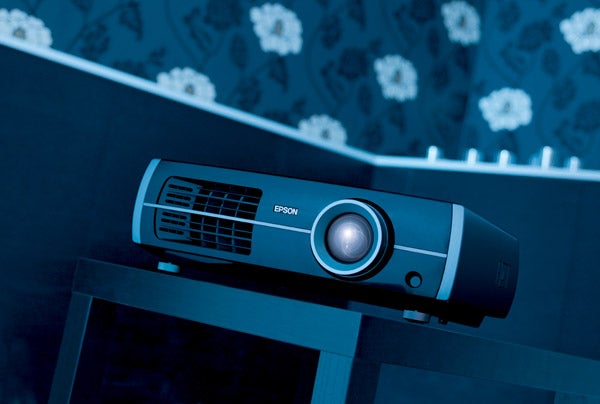 These DLP projectors both deliver slightly richer colour palettes than the Epson too. But both these rival projectors suffer to some extent with the rainbow effect, run more noisily than the Epson, and fail to provide frame interpolation systems on a par with the admittedly flawed effort found on the TW5800.


JVC’s £3,300 DLA-HD350 delivers more shadow detail in dark areas than the Epson, too, without any concerns about the rainbow effect – but for me the Epson’s colour palette is slightly more natural – and easy to calibrate.


Although it’s obviously disappointing that one of the TW5800’s key features, Frame Interpolation, is rather problematic, it’s worth pointing out that similar systems on most if not all other projectors and TVs are flawed too. In fact, the TW5800’s stab at tackling the thorny issue of judder actually fares better than many, in most respects.


Furthermore, even if you decide not to use the Frame Interpolation system, the TW5800 still does enough, in my opinion, to make it a truly outstanding LCD projector. One that’s worth its money and which thoroughly deserves to at least be auditioned against the JVC and InFocus models mentioned towards the end of the review.